This website describes the second part of my one month Maldives trip to the north of the country (Haa Alif, Haa Dhaal, Shaviyani, Noonu, Lhaviyani and Alif Alif Atolls). You can find the beginning of the report of this trip here. At the end of the website you will find a link to the next islands.

Coming from Velidhoo I reached the best snorkeling island on the Maldives so far. It’s an insider tip and I want it to remain this way. That’s why I don’t mention the name of this island here.

There is one small resort on the island that is located only a few meters away from the beach and also has the only restaurant on the island. As it doesn’t have to worry about competition, it unfortunately falls behind with a combination of below average kitchen performance and above average prices.

Otherwise, this island was the highlight of my two trips to the Maldives!

I enjoyed fantastic sunsets from the beach every evening. 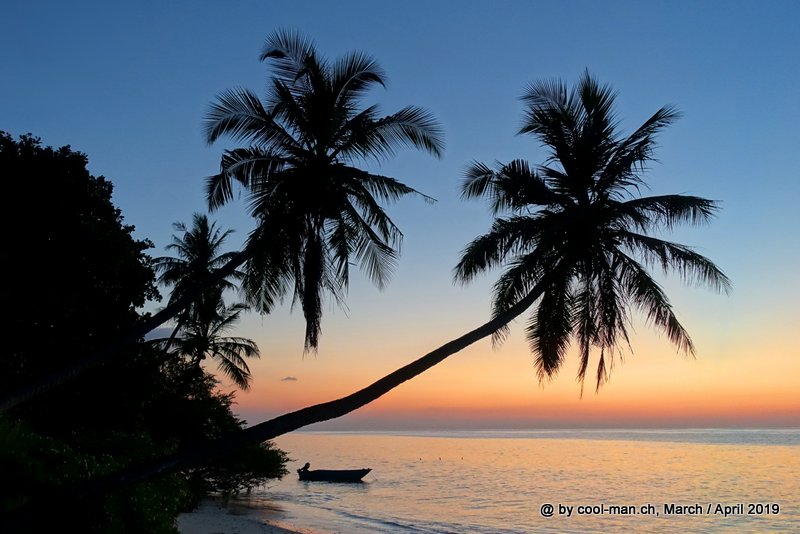 The reef was as diverse as those in Raja Ampat, Indonesia.

Arrived at 8 a.m. in the morning, I went snorkeling right after checking in. Suddenly four dolphins passed me. I was so surprised that I could only take this blurred photo. Wow, never before did I snorkel with dolphins! In the afternoon I met the dolphins a second time. By the time I had the camera ready, they had disappeared into the blue of the sea again.

This dolphin family swam only a few meters past me. 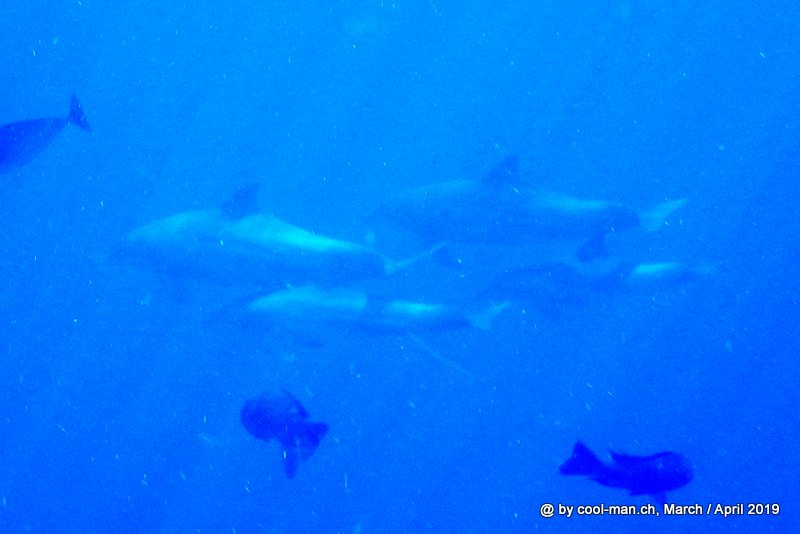 The dolphins were at the reef on several days but I did not see them again while snorkeling.

I soon realized that this was a special reef where I met countless species of fish for the first time. Of course I also saw the usual reef fish in large numbers. But for the photos I concentrated on unusual or big fish. Usually I snorkeled on the Maldives once in the morning and once in the afternoon, but on this island I was already in the water before breakfast for a snorkeling tour. 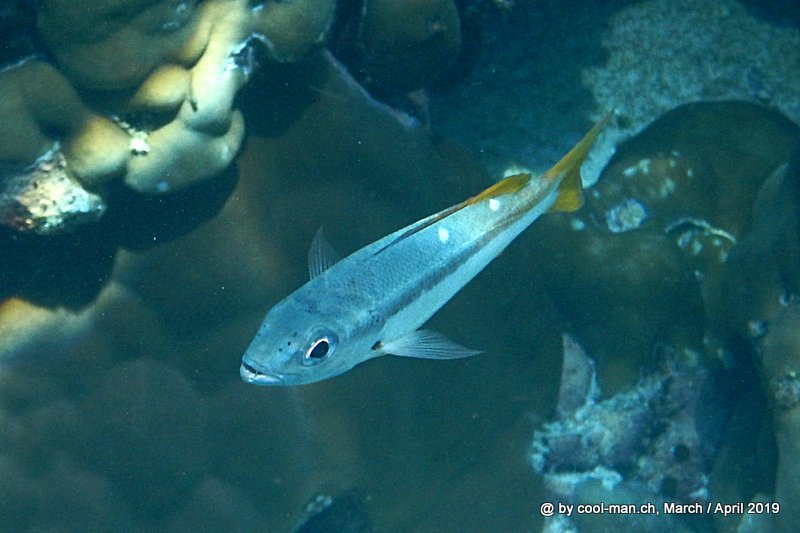 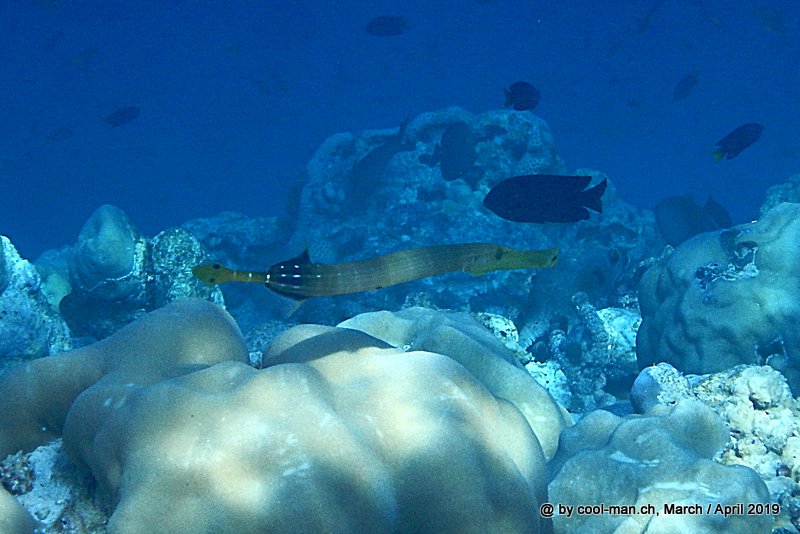 A female of a Bicolor Parrotfish 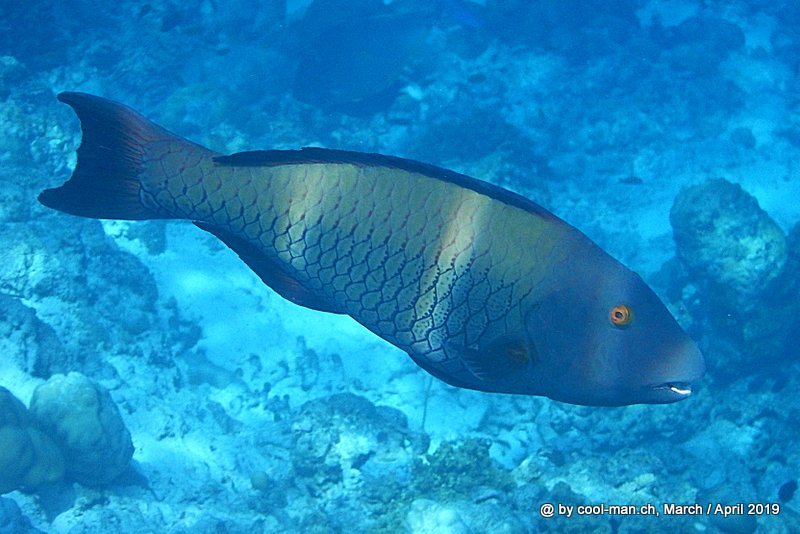 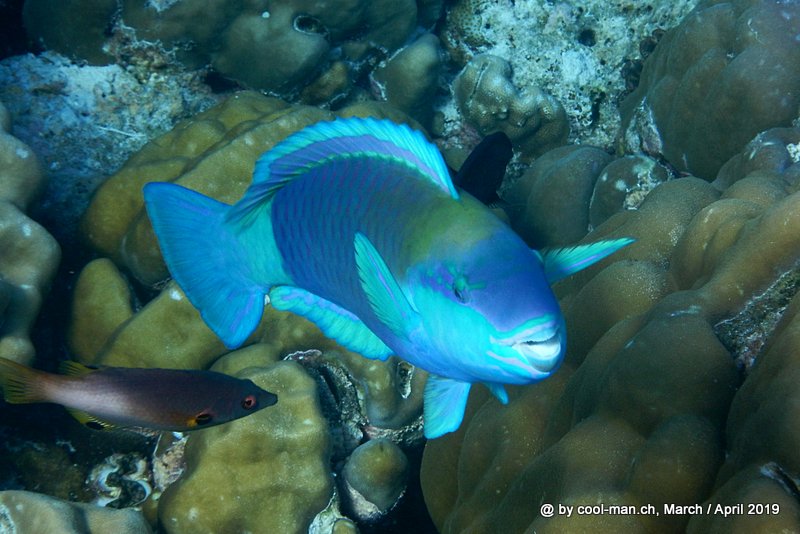 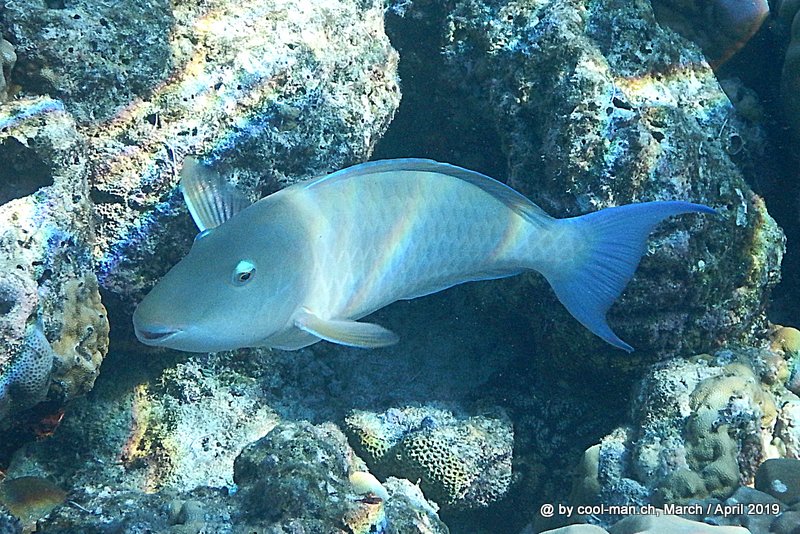 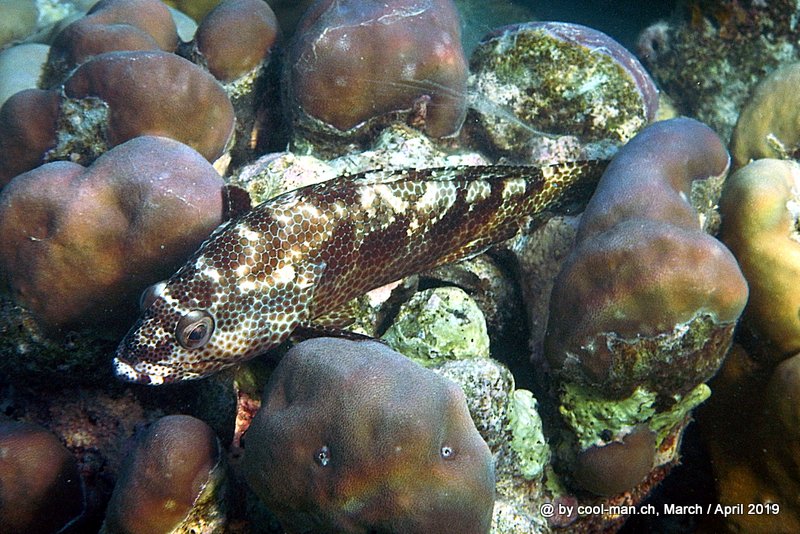 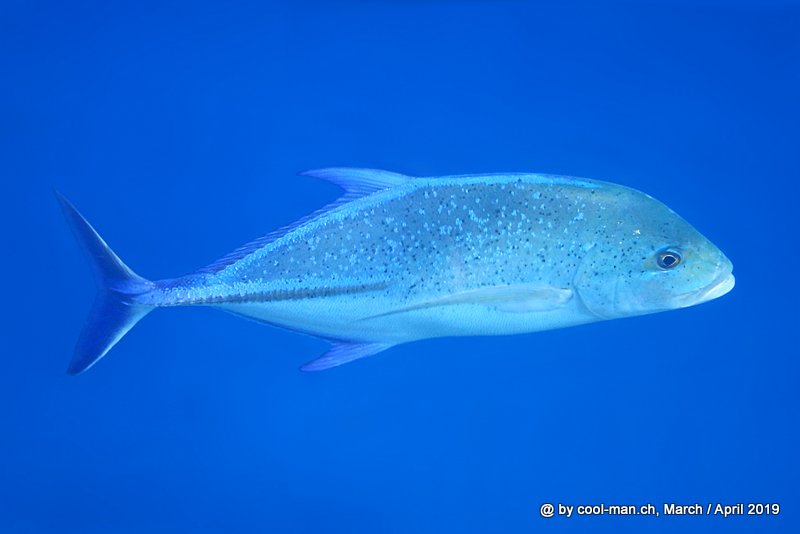 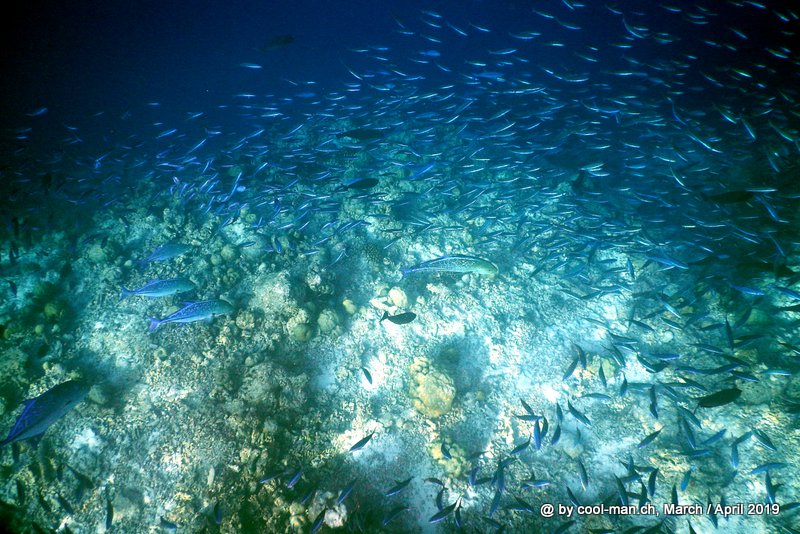 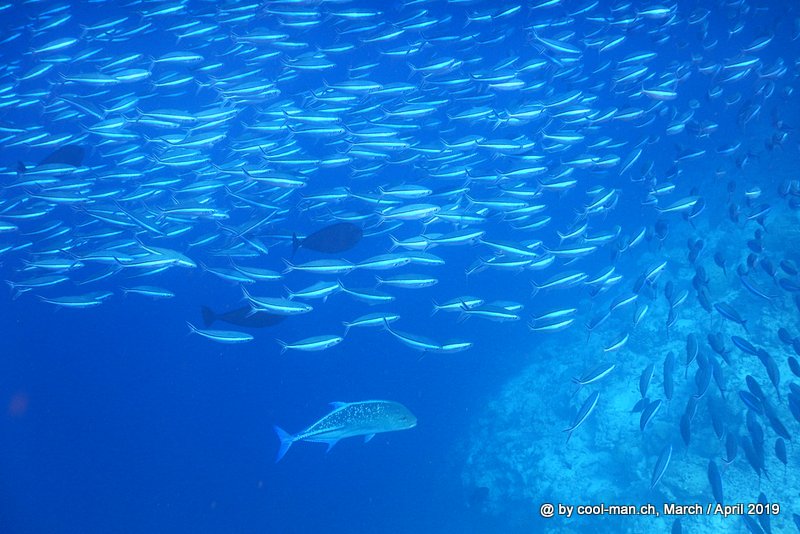 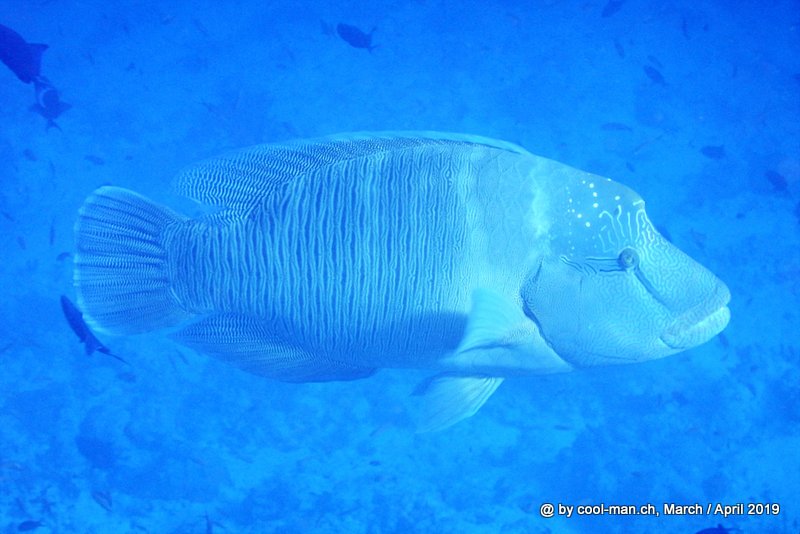 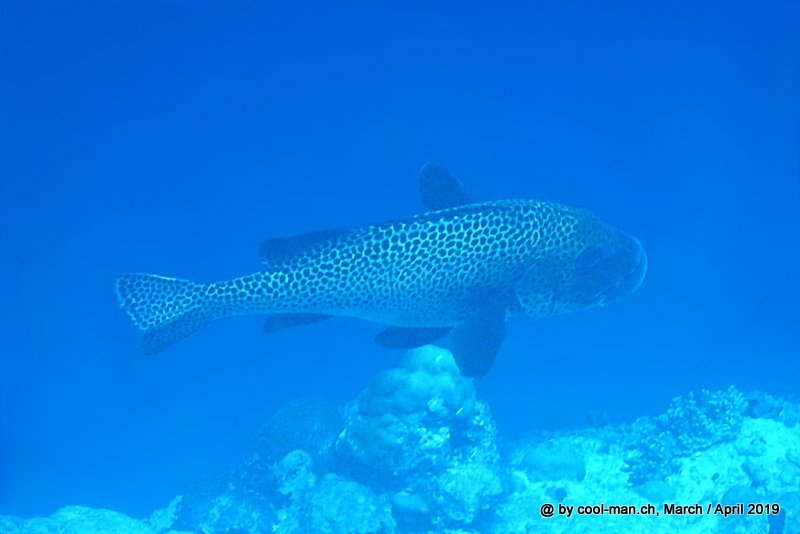 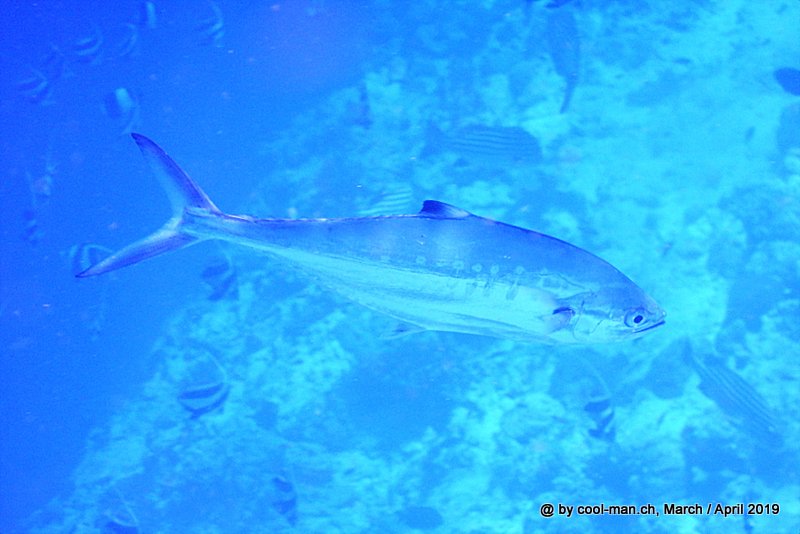 This majestic reef manta ray emerged from the blue of the sea. It was the first time I encountered a manta ray on a reef. 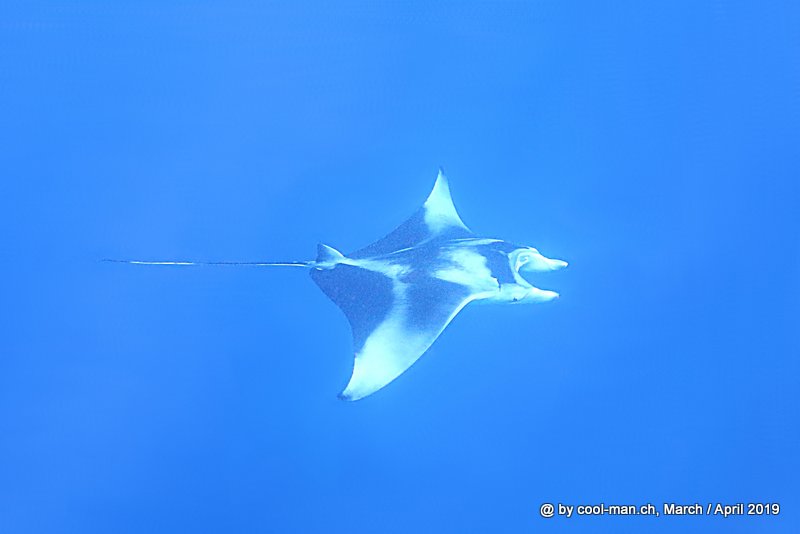 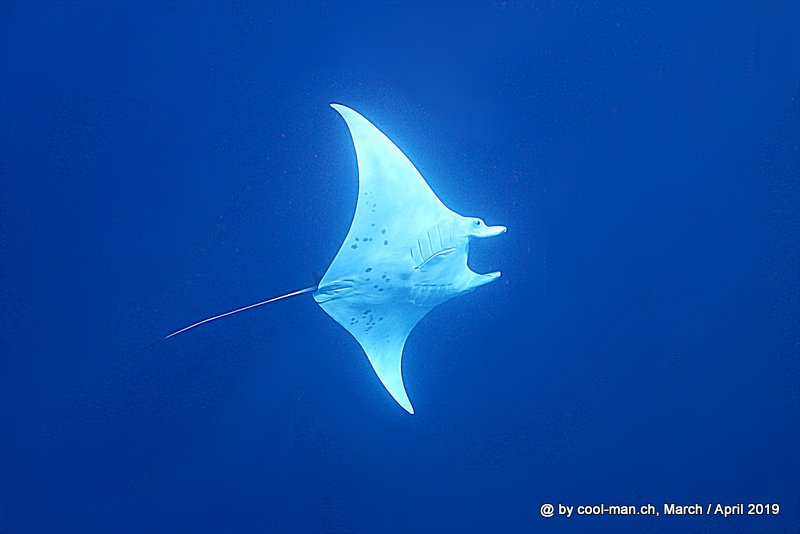 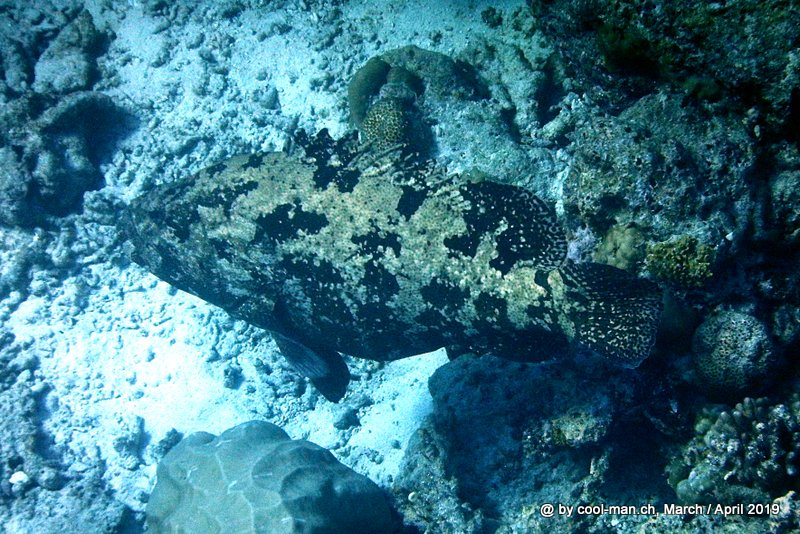 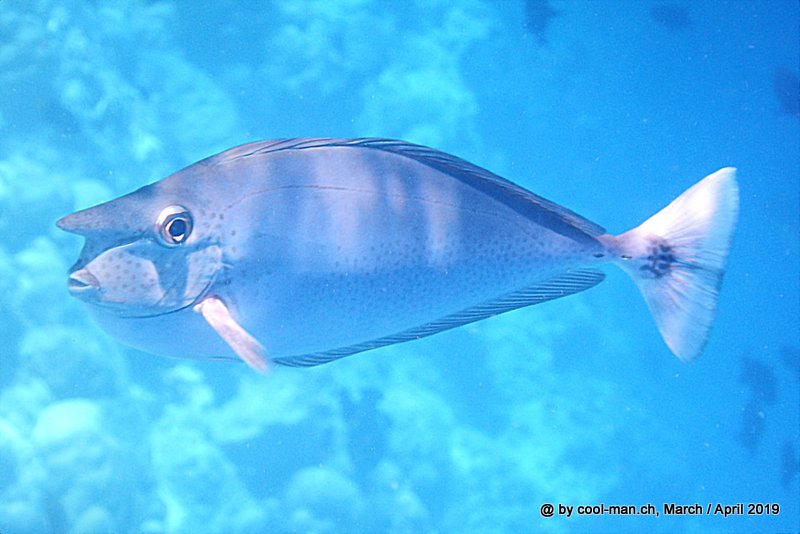 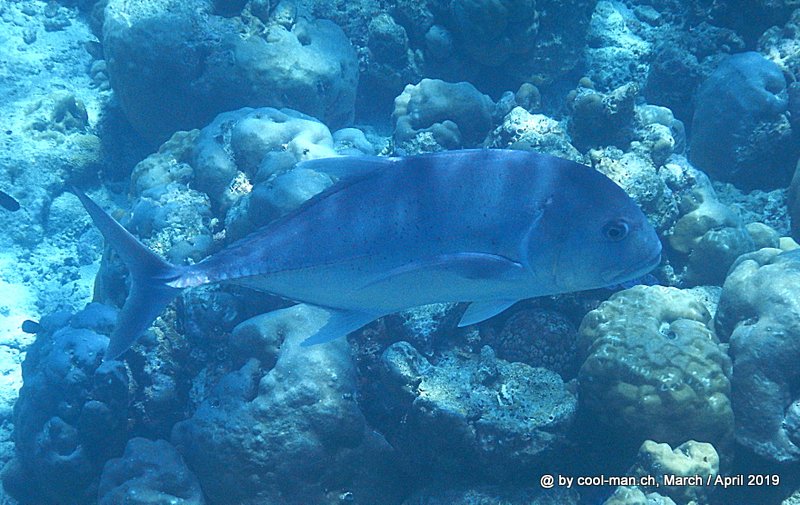 …and here from the front 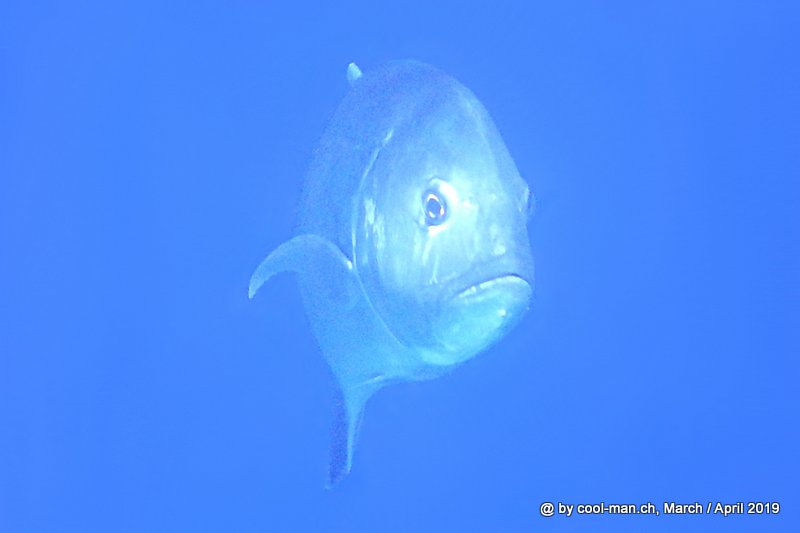 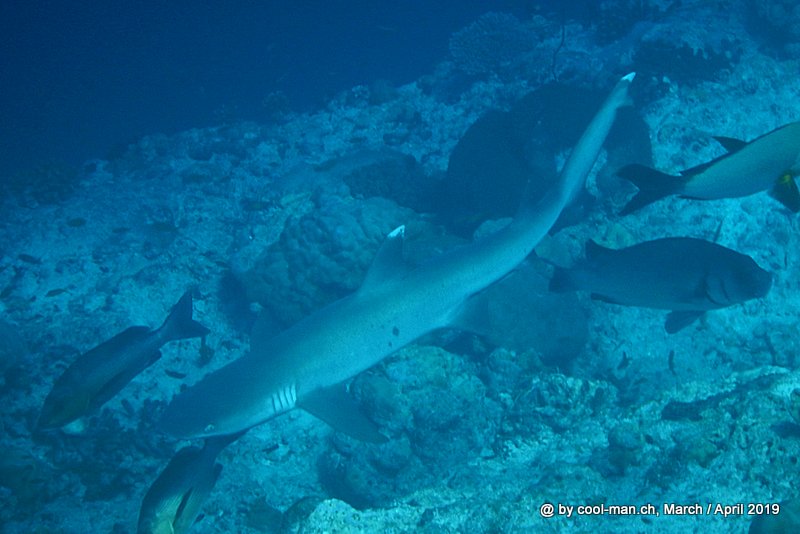 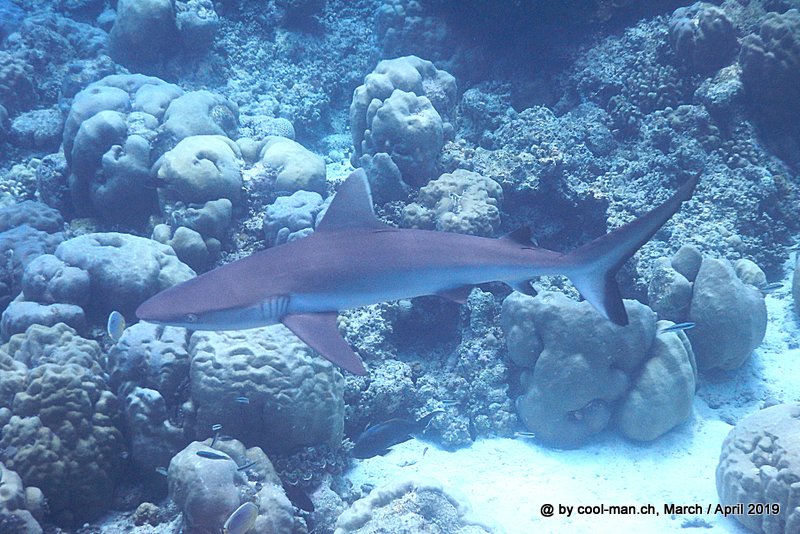 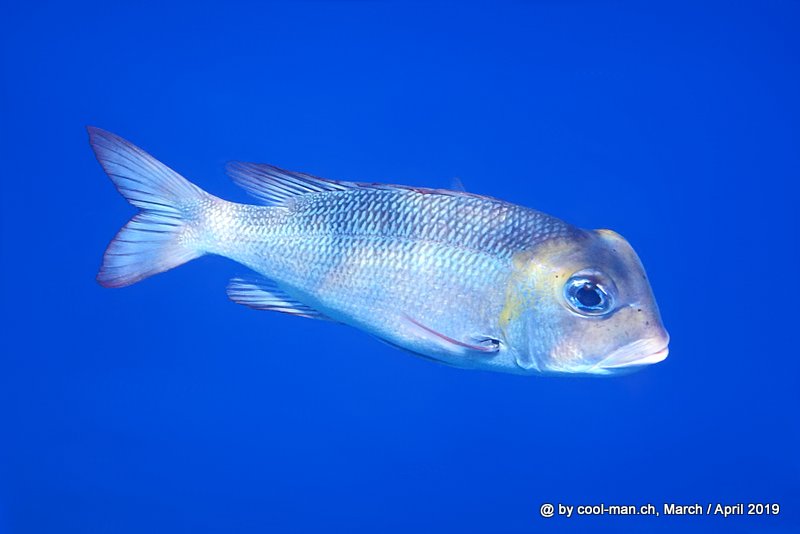 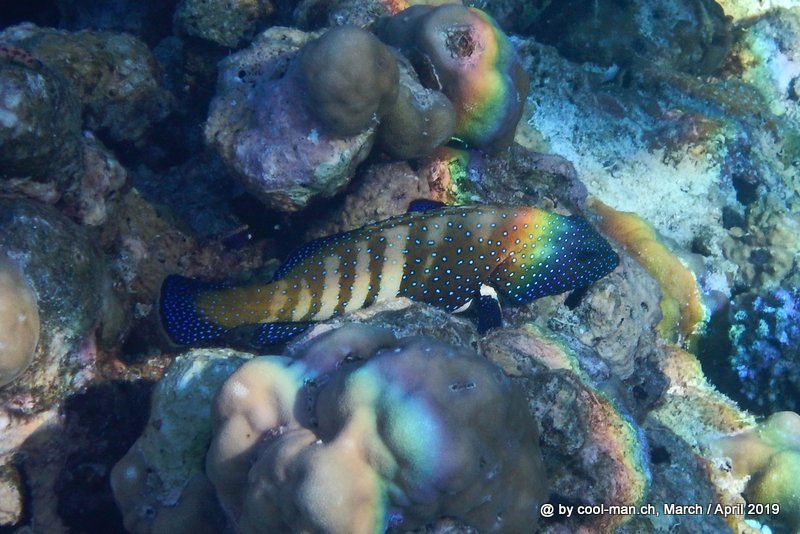 On the left a Blackspot Emperor, on the right a Bluefin Trevally and below a Goat fish 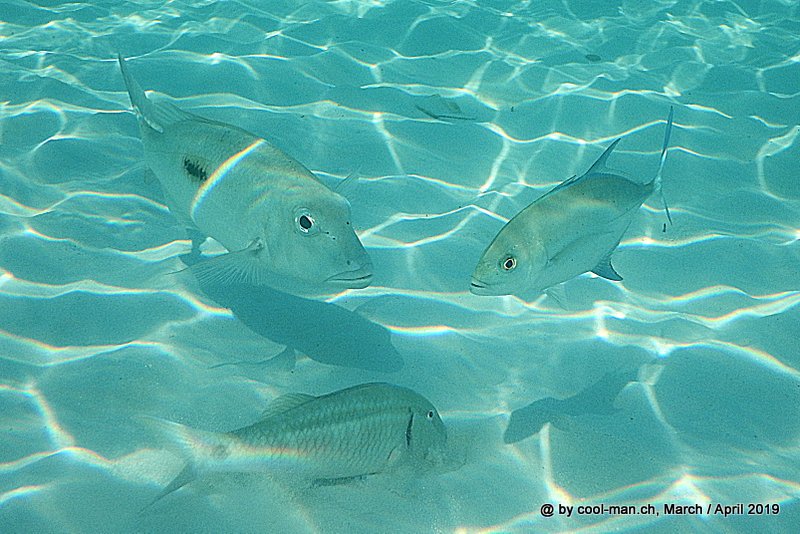 The Midnight snappers swam towards me at high speed from time to time, just to turn away shortly before me.

A Midnight snapper observes me. 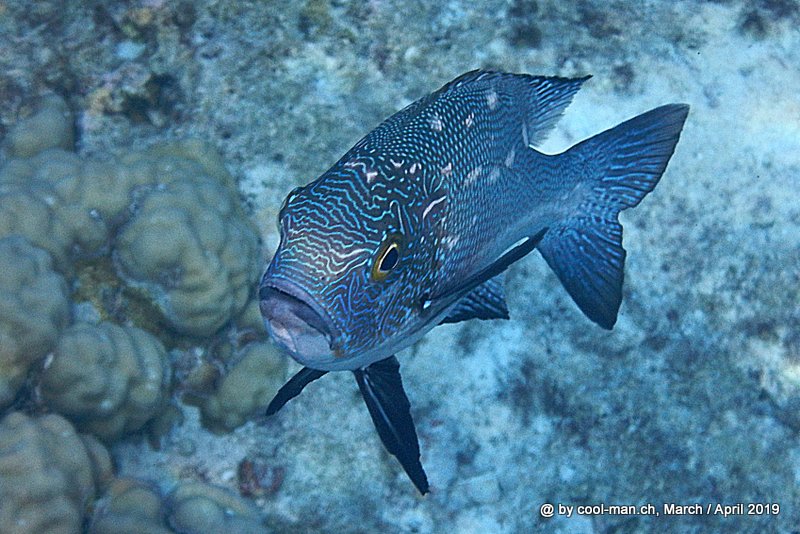 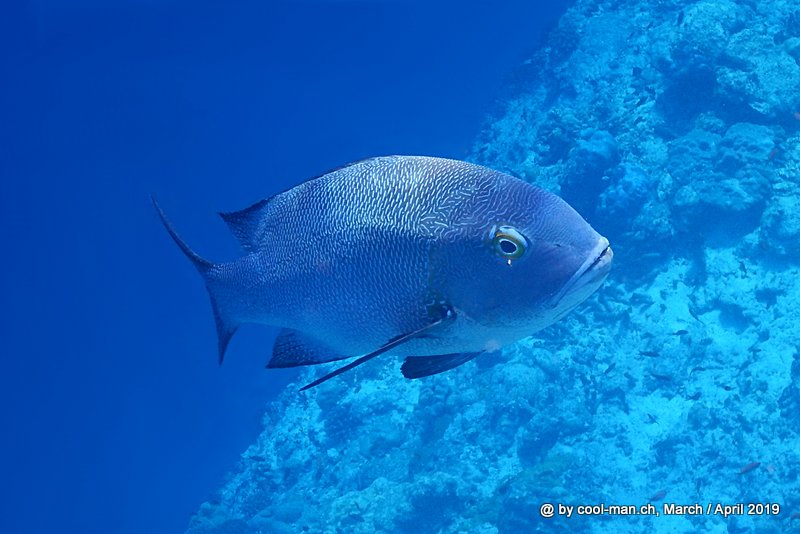 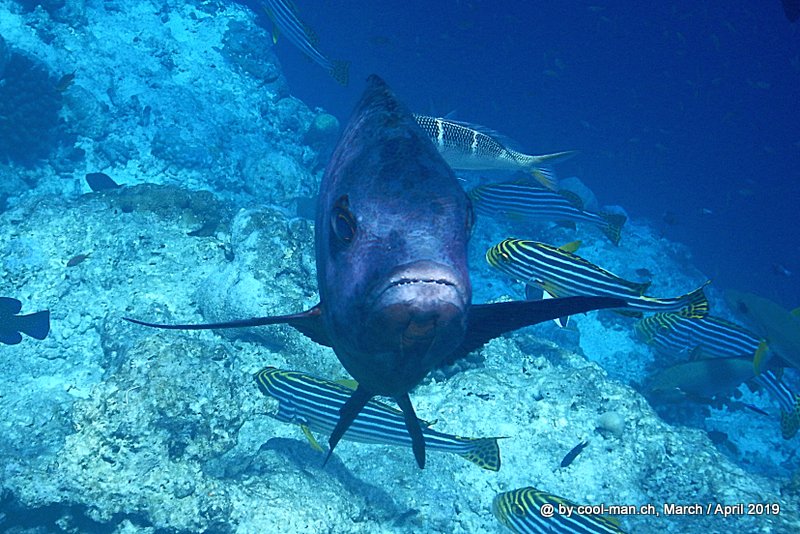 After four impressive days I left this paradise already, because the ferry to Hinnavaru only departed once a week.

I took the local ferry back to Velidhoo, where I boarded the boat “Concorde” to Hinnavaru in the Lhaviyani Atoll the same evening.