After spending part of the rainy Swiss summer in Portugal, Morocco and on Lake Como, I traveled to Chile at the beginning of November. After a few days in the capital Santiago de Chile I wanted to discover the north of the country.

Santiago de Chile was destroyed again and again by earthquakes and has therefore hardly any sights to offer. After all, one can climb a few hills and enjoy a wide view over the city. 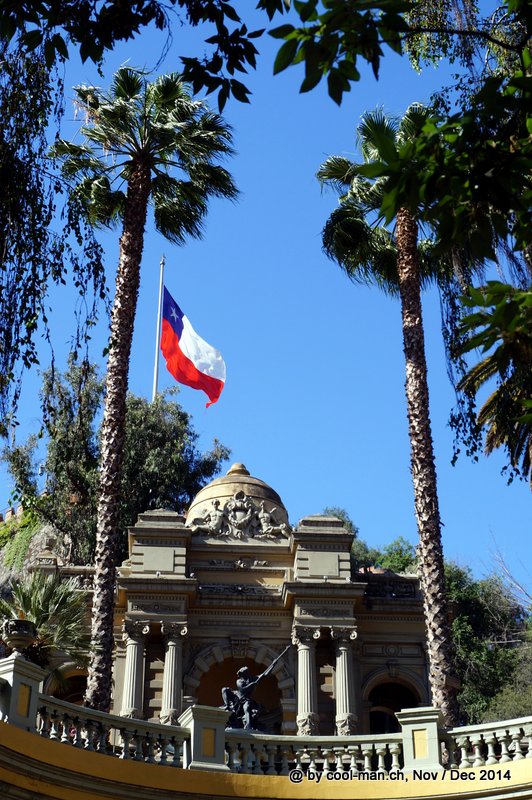 View from the Parque Metropolitano 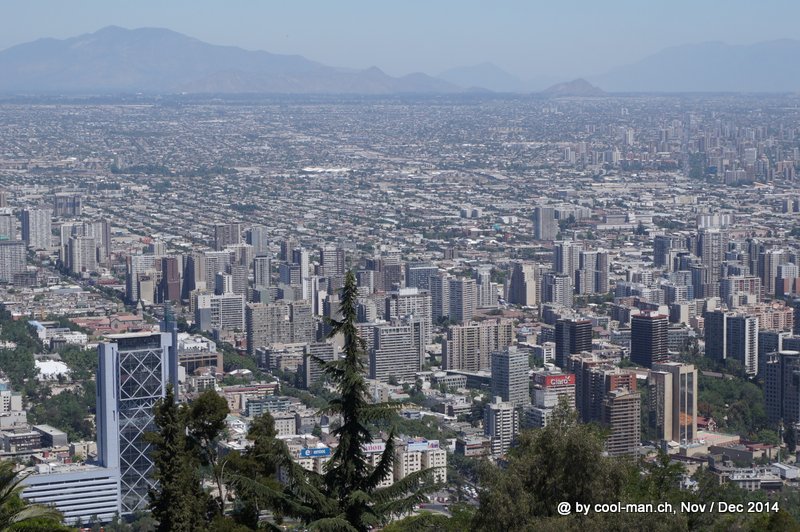 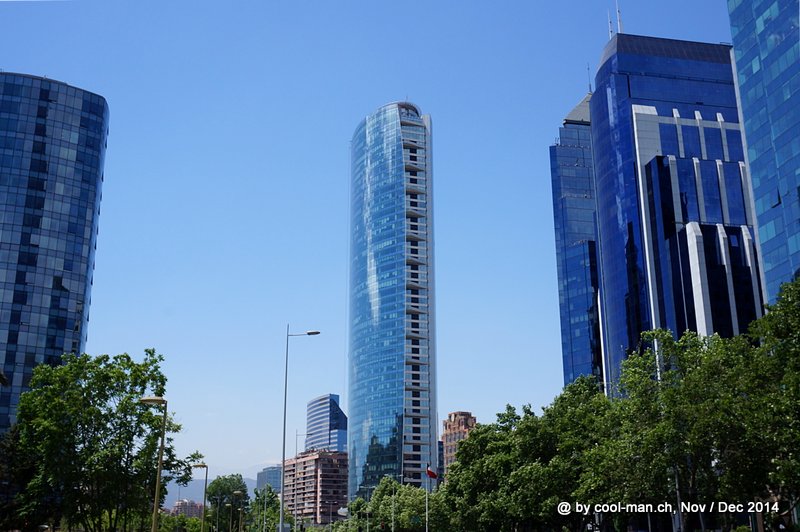 Also worth seeing is the Museum of Pre-Columbian Art, which shows South American exhibits that were created before the colonization by the Europeans. Above all, the Inca and Mayan cultures are prominently represented. Some of the exhibits are surprisingly creative. 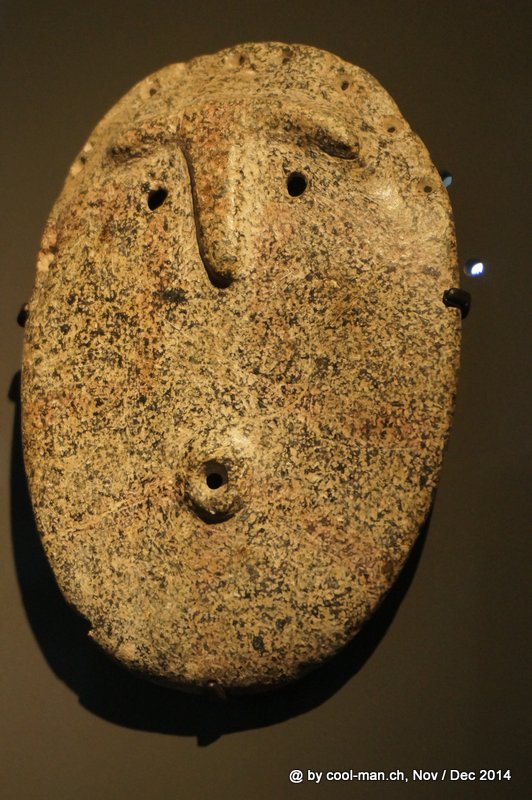 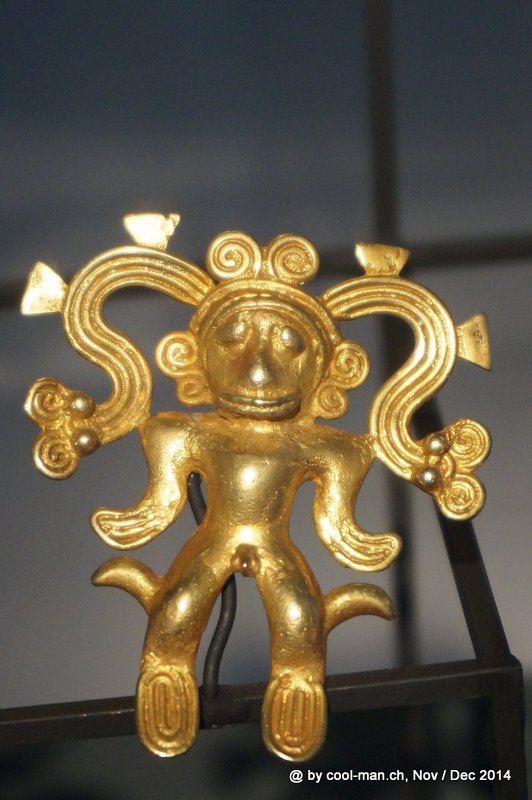 As a political and economic center, Santiago is also the culinary number one in the country. A few restaurants offer gourmet experiences at the highest level. Some wine bars offer over a hundred different wines of the country and it is possible to directly compare different wines within the framework of tasting sets.

A day trip took me to the Concha y Torre winery, founded in 1883. Meanwhile, from humble beginnings, the largest wine producer in South America has emerged. The group offers wines from the most different cultivation areas under innumerable marks.

Chile is by far the largest producer of wines from the Carmenere grape variety, which originally comes from the Bordeaux region. In the middle of the 19th century, the phylloxera disaster led to the disappearance of this grape variety in Europe. In Chile, the grape vines were thought to be Merlot. It was a French oenologist who identified Carmenere in Chile in 1994. In 1996 the first pure Chilean Carmenere wine was presented.

Then I flew 1’100 km north to Antofagasta. The magazine of the airline immediately makes clear what Chile lives on, because it is full of advertisements for heavy equipment used in the mines.

Antofagasta is a run-down city that lives mainly from the surrounding mines. It is hard to believe that this city has the highest gross national product per capita in Chile. After all, I found the excellent restaurant Amares, which made it into the top league of Chile.

The next morning I traveled to my actual destination, the oasis town San Pedro de Atacama in the middle of the Atacama desert. It is the tourist center in the north of Chile. Accordingly, there are many accommodations and restaurants in every quality level. Nevertheless, the place has been able to preserve its oasis atmosphere, as the new buildings were built in the historical style. From San Pedro, there are countless day trips to be made. I liked it very much, thus I stayed for two weeks. 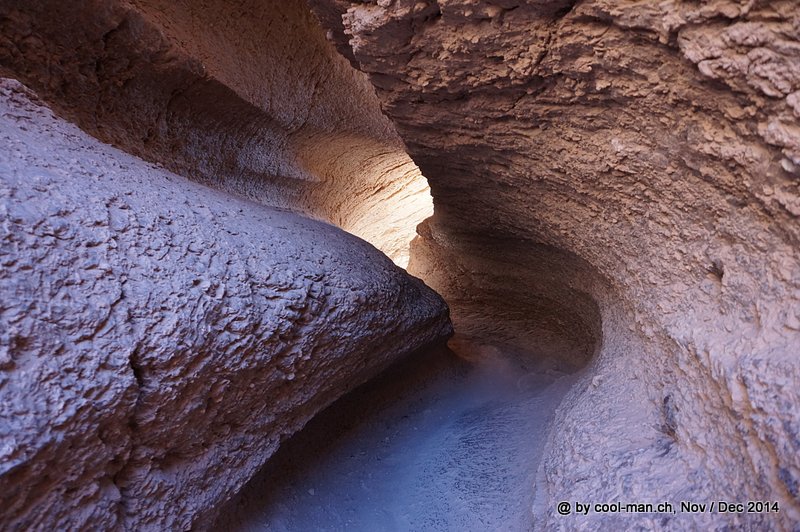 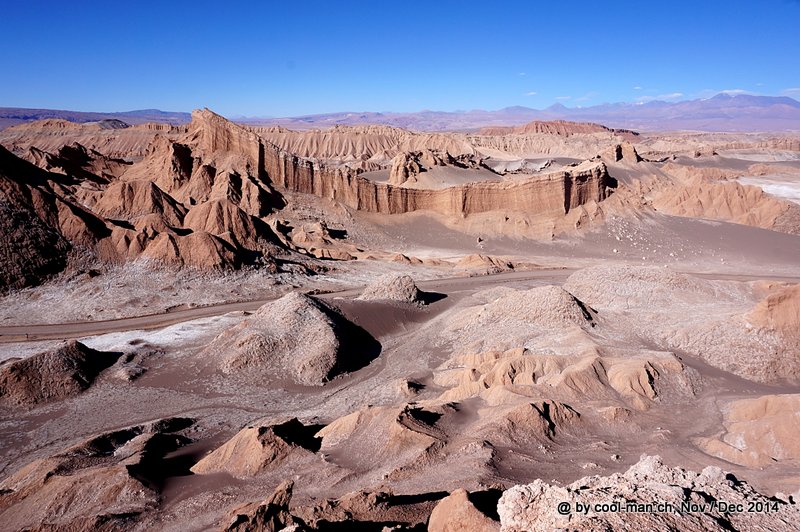 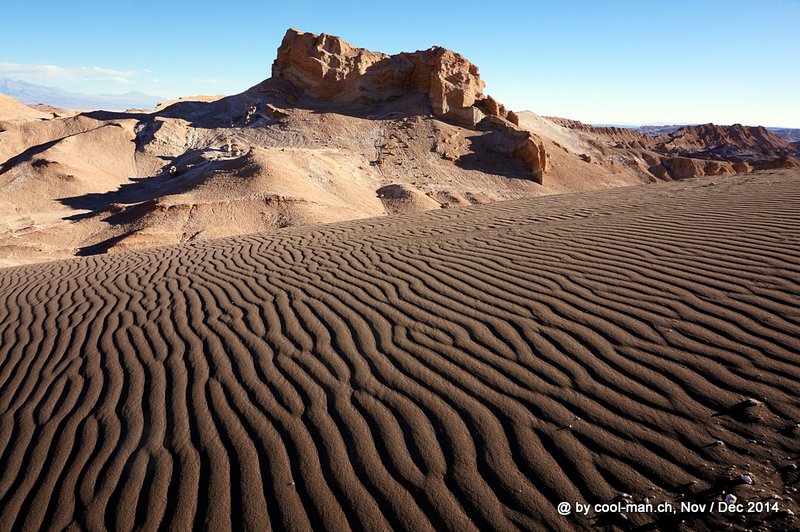 In the background the volcano volcano Licancabur 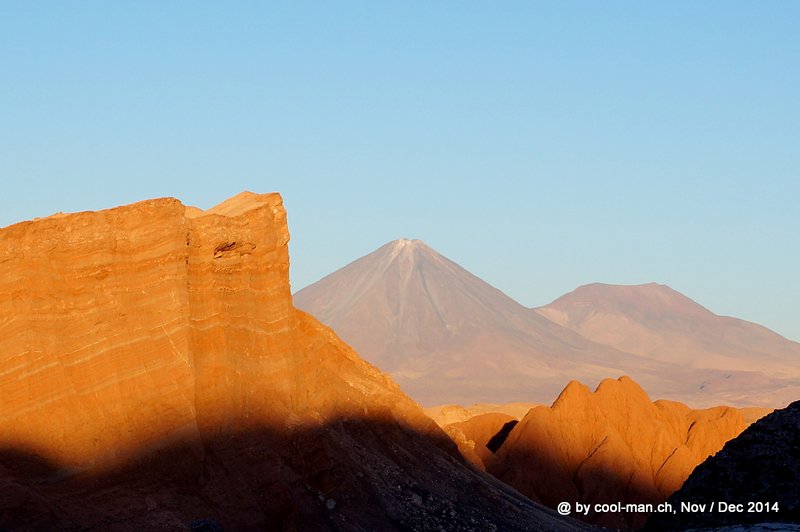 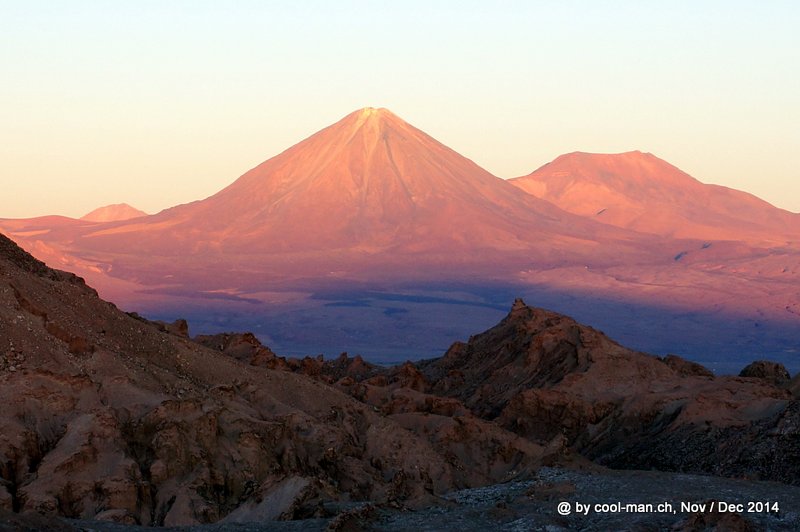 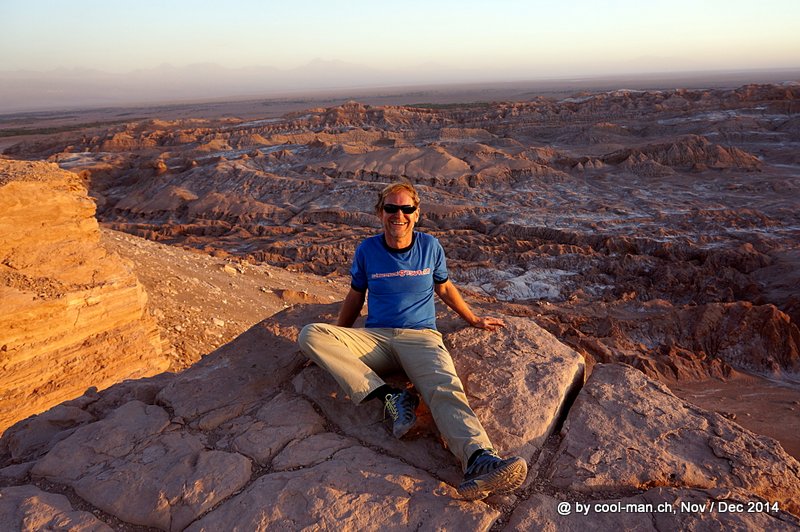 From San Pedro de Atacama I made a 3-day tour to the Salar de Uyuni in Bolivia, the largest salt lake in the world. You can find this travelogue here.

Back in San Pedro de Atacama I did some more excursions, partly by mountain bike, partly on foot or with a tour.

A tour led me to Laguna Miscanti. 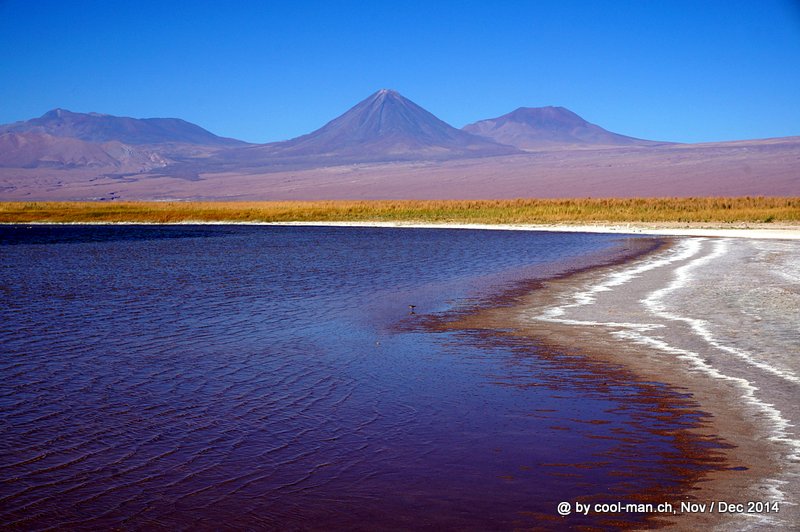 With another tour I visited the Valle del Arcoiris (Rainbow Valley) 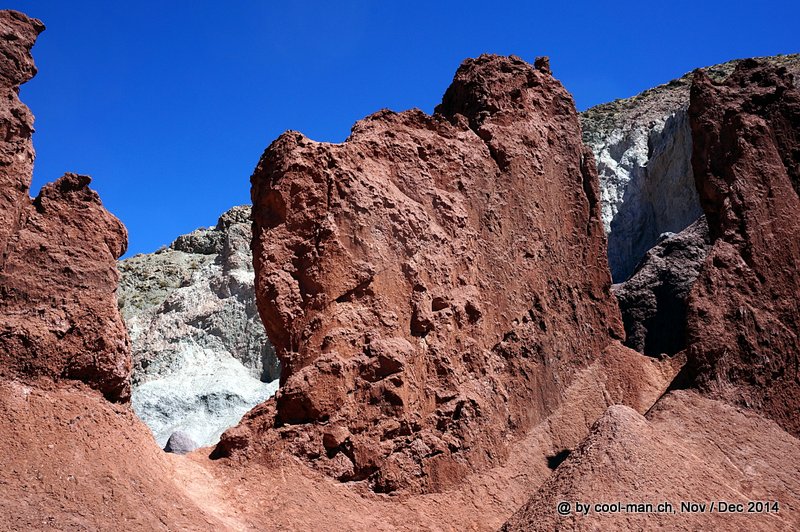 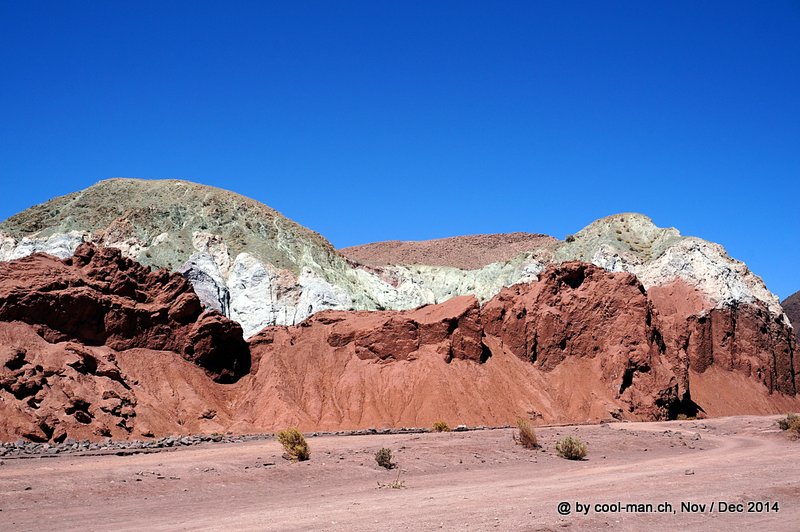 Already in the prehistoric times there were dangerous dogs 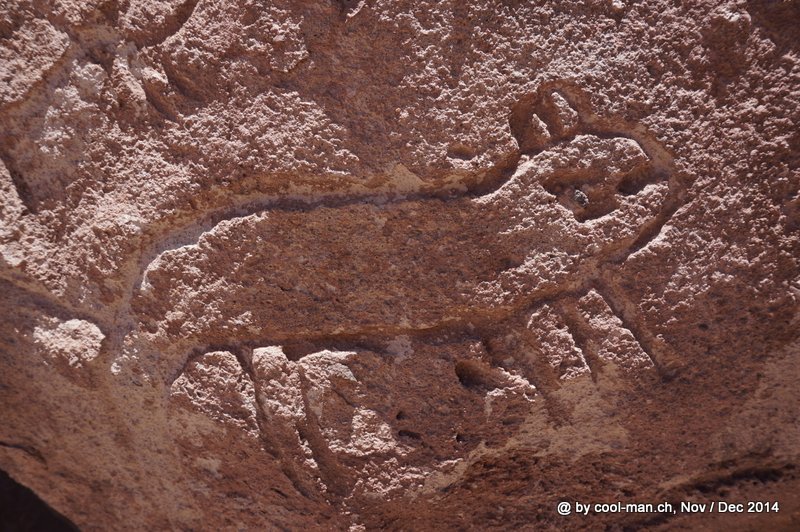 At the Salar de Tara 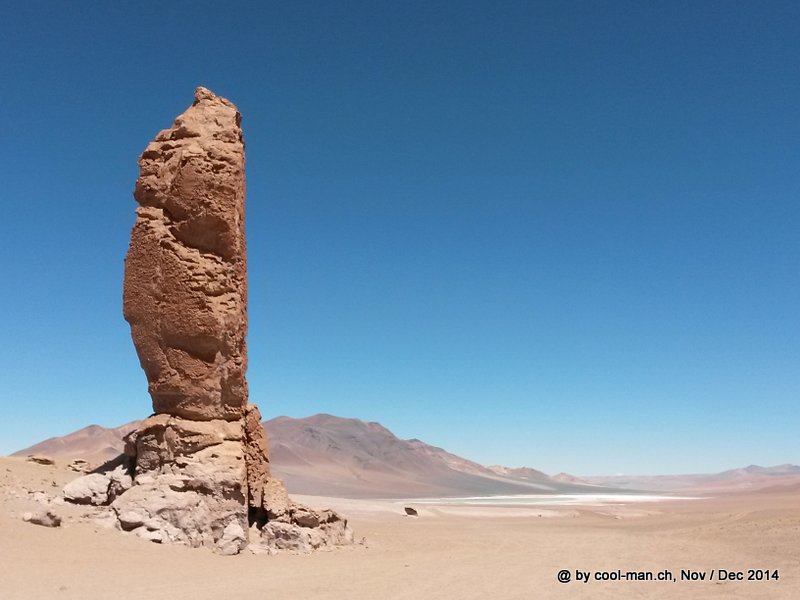 A highlight was the ascent of the 5’641 meter (18,507 ft) high active volcano Lascar. A breathtaking view of other volcanoes, salt lakes and the wide plain rewarded one for having withstood the icy winds in the early morning.

After sunrise at Lago Leija 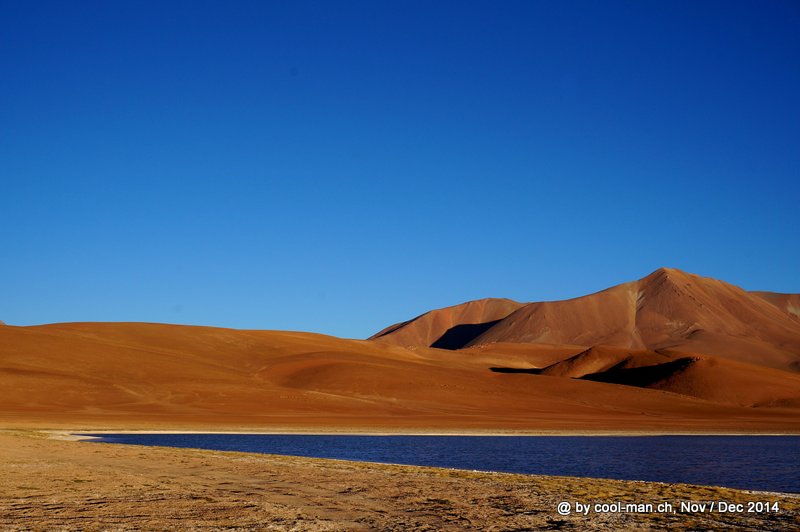 At the crater rim of the volcano Lascar 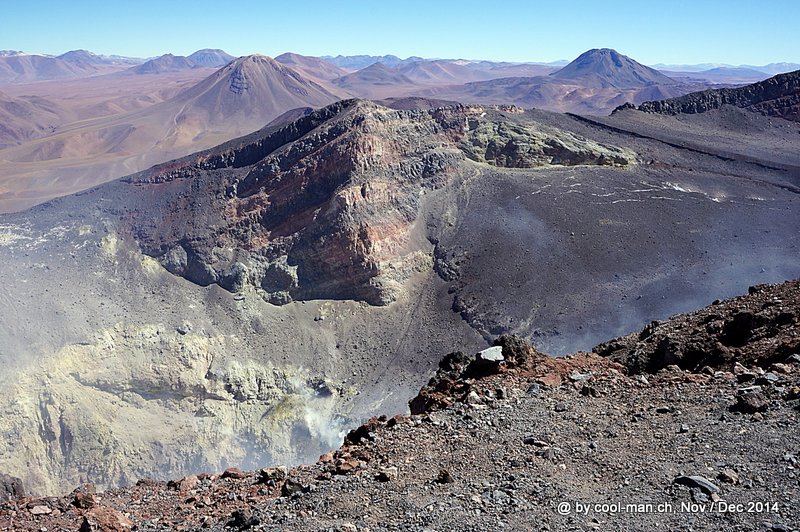 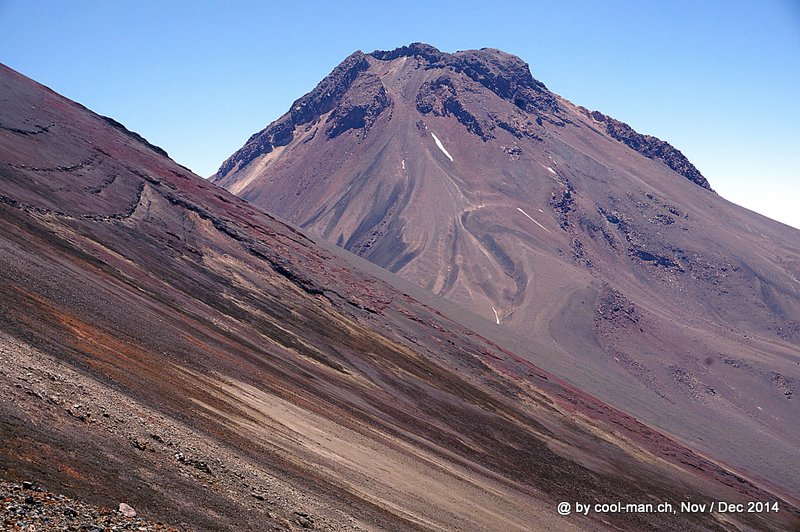 The next stop was the nearby mining town of Calama, where I visited the world’s largest open pit copper mine Chuquicamata. This mine alone accounts for 10% of Chilean copper exports. The hole is 4.3 km long, 3 km wide and 900 m deep. Although a total of 29 million tonnes of copper have already been mined, a world record, it is still home to one of the largest copper deposits in the world. Every day, 60,000 tonnes of rock containing 1% copper are removed from the mine by truck for further processing. These monsters of trucks, which look like toy cars down in the mine, consume 3 liters of fuel per minute. The fuel tank has a capacity of 5,000 liters. A single tire costs 40,000 dollars and lasts only 8 months. 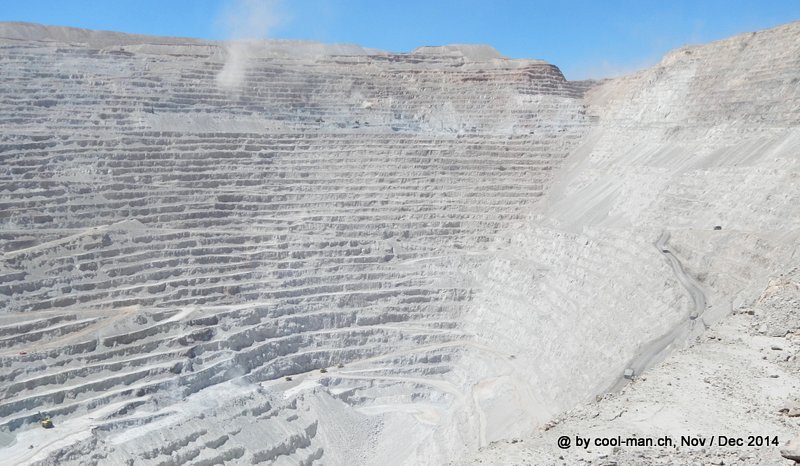 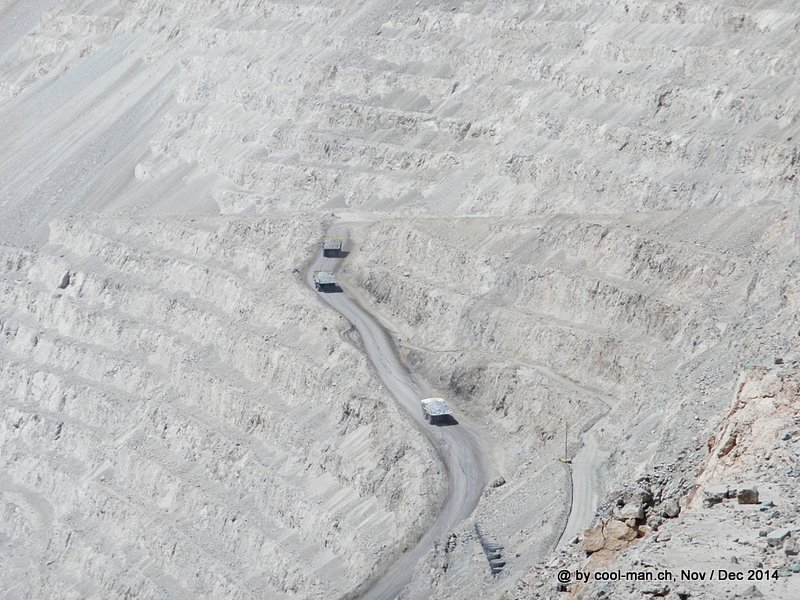 From Calama I drove six hours through an impressive desert landscape to the coastal town Iquique. I liked Iquique right away. In my opinion it is the most beautiful city in Chile. When I arrived I immediately put on my jogging shoes to run along the beach and enjoy the sunset. Iquique seems to have a fitness conscious population, because there were two fitness studios near my hotel. The culinary offer was also convincing, especially of course the fish dishes.

The beach of Iquique 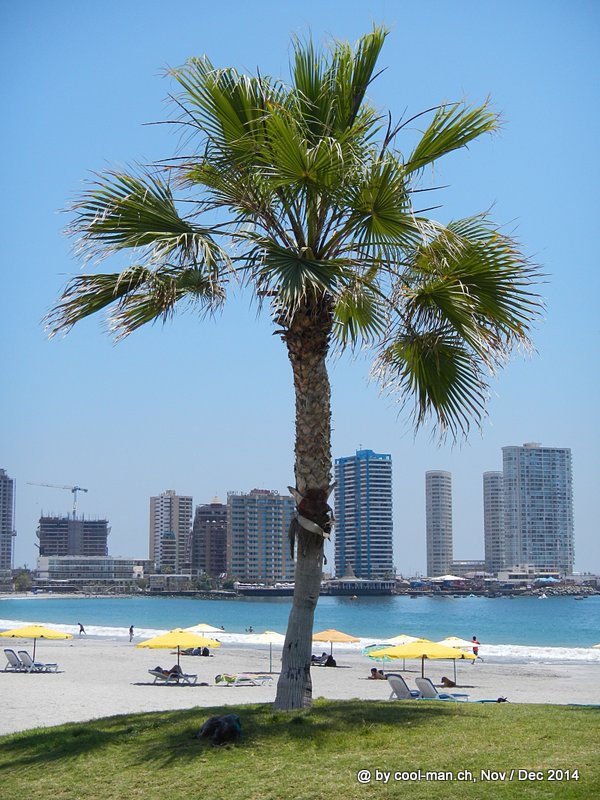 A trip to the abandoned saltpeter towns of Humberstone and Santa Laura, which are UNESCO World Heritage Sites, was very interesting. From 1872 onwards, saltpeter was mined and processed in this area and used for the production of fertilizers and gunpowder. During the depression of 1929, the cities were abandoned because, on the one hand, demand fell sharply and, on the other hand, German chemists had found a process to produce ammonia much cheaper industrially. Due to the rapid evacuation of the cities, all buildings and industrial facilities, even if rusty, have been preserved.

On the same day I visited the “Geoglifos de Pintado”, which contain over 400 rock paintings from pre-Columbian times. 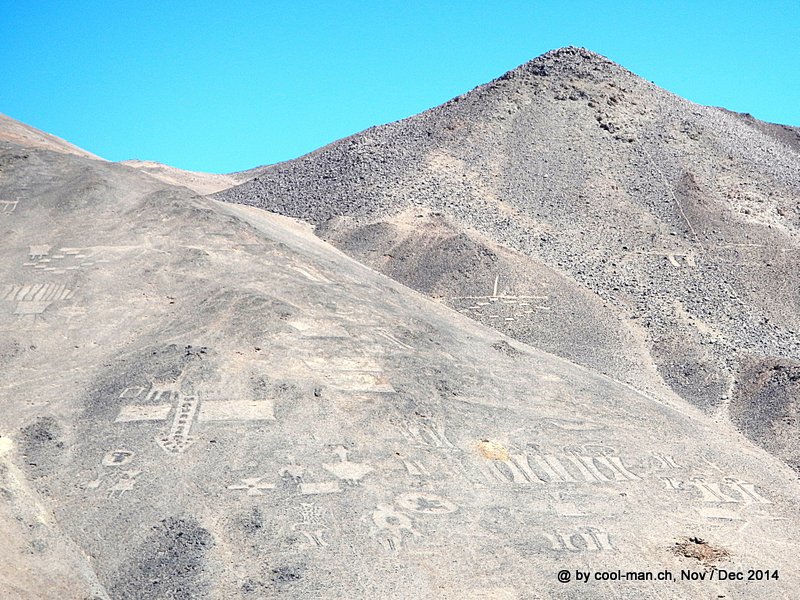 Actually I wanted to travel via the Andes, which tower up to more than 6’000 meters in the border area between Chile and Argentina, further via the national parks Volcán Isluga and Lauca to the north. This trip is only possible in a group, because you need a 4WD-Jeep and a qualified guide. There is hardly any traffic in this area, no gas stations and very few huts, but they are not always occupied. In Iquique, I hardly met any other tourists, so that it was impossible to continue my journey on this route.

So I drove along the coast to the northernmost city of Chile, Arica. Arica is a port city whose trading area includes Chile and a large part of Bolivia. A road over the Andes connects Arica with the capital of Bolivia, La Paz. For the traveler, Arica is the starting point for the visit of the Lauca National Park, which is dominated by the 6’348 meters high Parinacota volcano. Also in Arica I hardly found any other tourists, so I went alone to the Lauca National Park. The village Putre at 3’500 meters is located at the edge of the national park and is therefore an ideal starting point. In Putre I learned that in the Lauca National Park there is a small village called Parinacota at 4’400 meters – the highest in Chile – where one could spend the night. There is even supposed to be Internet. I decided to stay there for a few nights and write my travel report on the computer in the evening and do the stock exchange business for my clients and myself. With the height I had no problems, but my computer did not like the thin air. Soon after starting the computer the first error messages appeared, that a defect had occurred with my hard disk and I should immediately save everything and no longer use the computer. After the Google search “Harddisk Problem Altitude” I realized that hard disks are only built for use up to a height of 3’000 meters, because the air cushion that separates the read/write heads from the rotating disk would otherwise become too small due to the thin air and could permanently damage the hard disk. After I had carried out the stock market transactions, I stopped working on the computer in the hope that the hard disk would work properly again at lower altitudes. As it turned out later, the computer is still running, but the error messages still point out that the hard disk should be replaced as soon as possible. Back in Santiago I wanted to buy a new hard disk. Unfortunately the rare 1.8 inch format is not available in Chile, so I will try to replace the hard disk in Panama at the end of December. On this trip I have an external hard disk with me for the first time, so that I can store my data on the cloud and back it up in another way.

Apart from the computer problems, the Lauca National Park was a very impressive experience. A hike led me to the widely ramified lake “Laguna de Cotacotani”. The two volcanoes “Parinacota” and “Pomerape”, both over 6’000 meters, formed an ideal photo motif in the background. The second day I spent with a biologist who documented the fauna at this altitude. On the last day in the national park I climbed the 5’100 meter high Cerro Guane Guane, from which I enjoyed a great view over the volcanoes and lakes of the national park. An overwhelming experience! 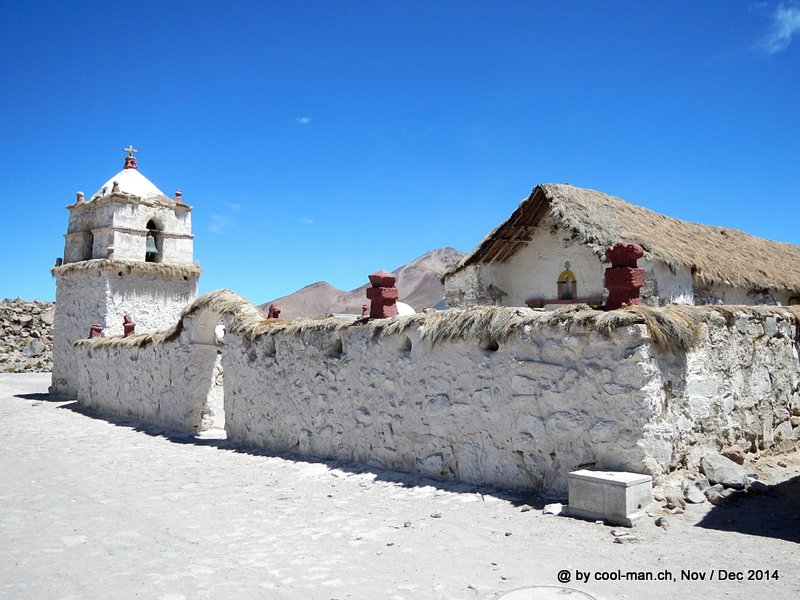 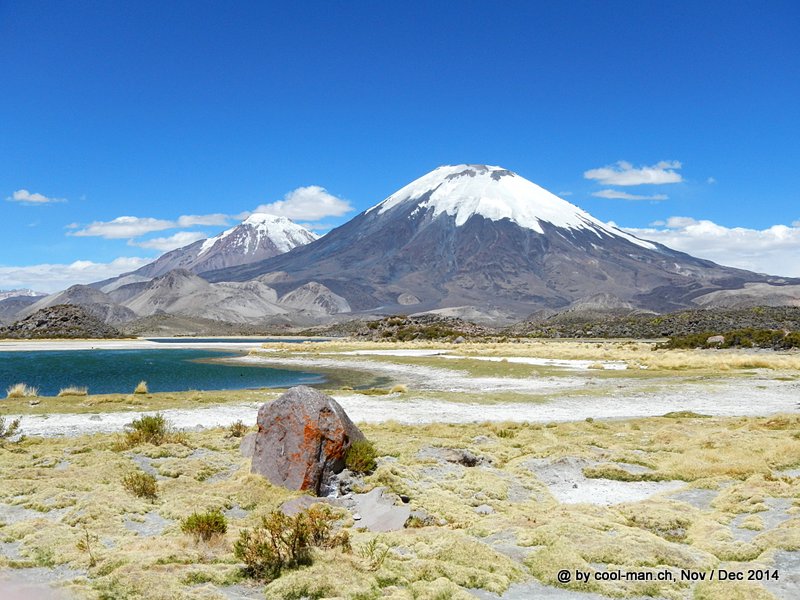 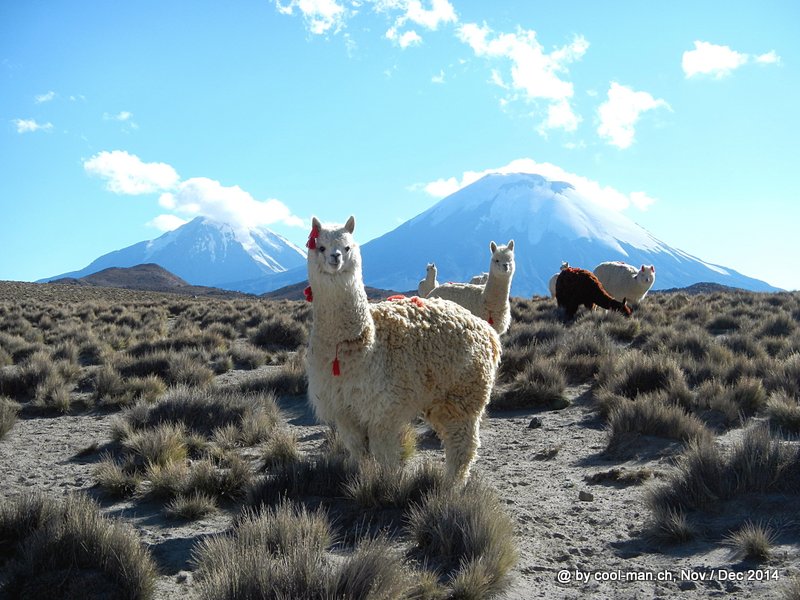 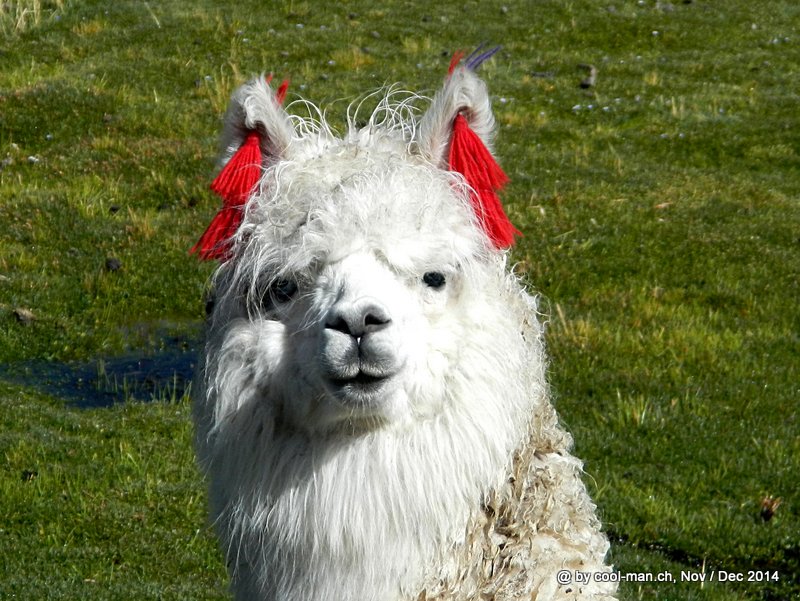 Then I flew back to the capital Santiago de Chile. This time I appreciated Santiago more than during my first visit. Finally it was warm again, green, the people were well dressed and I could choose from a large number of good restaurants.

On the last day in Chile I visited the port and artist city Valparaiso, which is about 110 km away from Santiago. From the cafes on the surrounding hills one enjoyed a wide view over the city and the sea. Many houses are painted with artistic flair in the most different colors, so that the city leaves a lively impression.

I liked it very much in Chile. The Chileans are friendly people. Also as car drivers they are very obliging and stop immediately if a pedestrian wants to cross the road. I was surprised by the enormous dimensions of the desert areas in the north of Chile, which extend over several hundred kilometers and are partly so dry that no vegetation can exist there.

Next I traveled with a Swiss colleague to Mendoza, Argentina.