Coming from Andijon in Uzbekistan, I traveled to the city of Osh on the Kyrgyz side of the border, which had little to offer for tourists. In Kyrgyzstan I could withdraw money from the ATM again, the Internet was fast, Skype worked and SIM cards were easy to get.

With three tourists from the hostel I made a day trip to the 2’389 meter high Chyiyrchyk Pass. In spring the farmers move to the mountain regions and set up their yurts. Spontaneously we were invited by a family to the national drink Kumys. It consists of fermented mare’s milk. Because this milk is kept in a smoked sack of animal skin, it has a smoky, sour, very individual taste.

After a long winter, a family has just set up their yurt in the mountains.

Afterwards I visited the mountain village Arslanbob, which lies at the foot of the world’s largest walnut forest. The tourist infrastructure is hardly developed yet and only very few people speak English. One stays overnight with families who don’t know private bathrooms and toilets. In the cold night I had to hurry through the rain to the toilet.

Actually I wanted to travel from south to north across Kyrgyzstan to the capital Bishkek. Since more than 50% of the national territory lies over 2’500 meters, it was still too early for many places in May because of the cold and the snow. Besides it rained and a weather change was not in sight. So I decided to go back to Osh and fly from there to Bishkek. In the city it was easier to wait for better weather and organize the rest of the trip.

After a few days the weather brightened up. I traveled to Karakol in the eastern part of the country. This city is an ideal starting point for excursions into the nearby mountains. I liked it so much that I stayed a whole week. With a tourist from Colombia I undertook every day hikes to hot springs or waterfalls. We passed yurts again and again. Often we were spontaneously invited to small snacks and tea. During a trip we spent the night with a young family. We were surprised how well they knew about all kinds of topics. The man was a football fan and even knew the names of some Swiss national players. We had different opinions about Putin. Stability is more important in this area than political correctness. It rained all night and morning, so we feared that our way back would be very dirty and muddy. We gladly accepted the offer to ride down into the valley on horseback for three hours. I was surprised how obedient my horse was.

Sheep and cattle driving is a lonely job. All the greater is the joy when an acquaintance crosses the path. 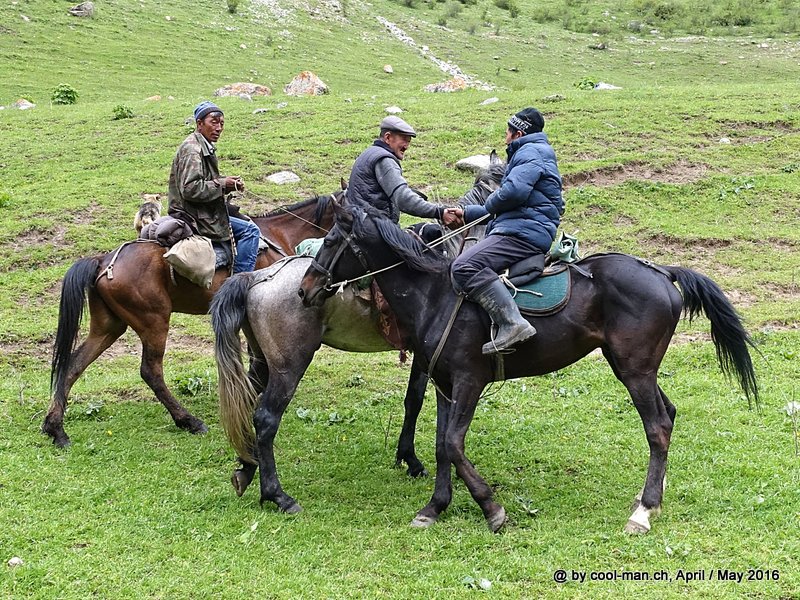 Kyrgyzstan is a horse country. Who has not ridden here, has not discovered the country. 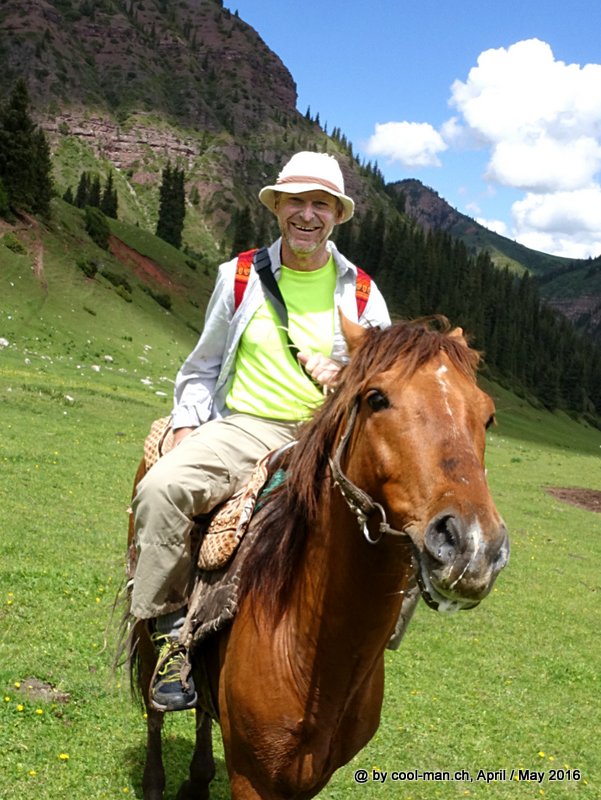 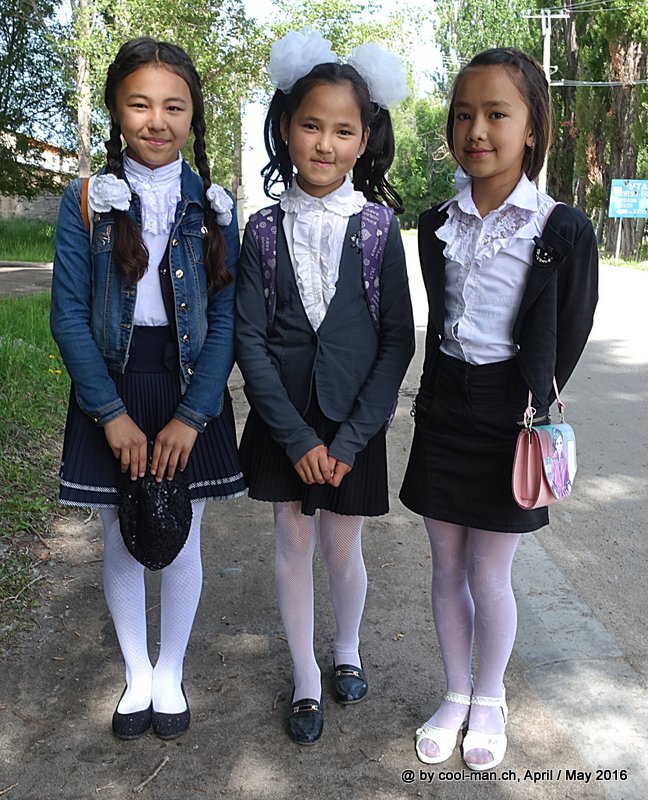 On Sunday the weekly animal market took place in Karakol, where mainly cattle, sheep, goats and horses are sold. I was more fascinated by the people and their clothes, because some came from remote places to do their business at the market. I also learned that three sheep fit easily into the trunk of a passenger car.

At the weekly animal market 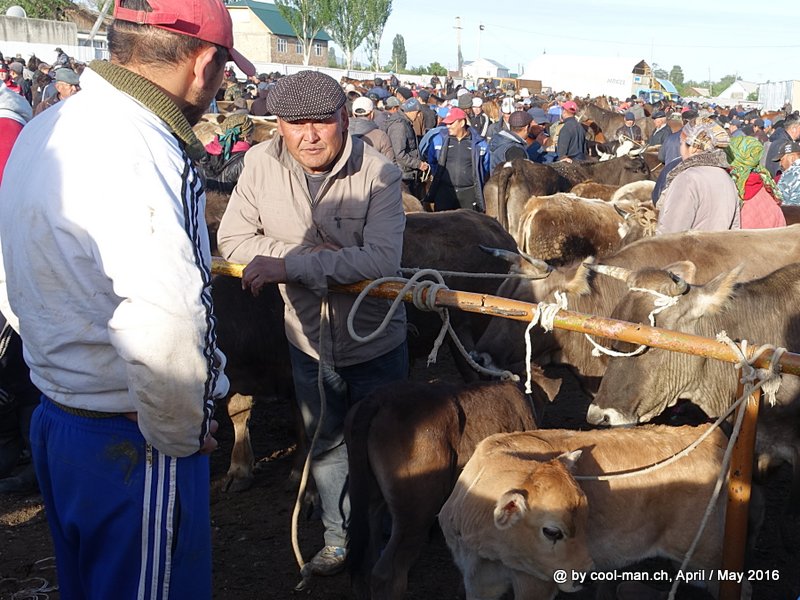 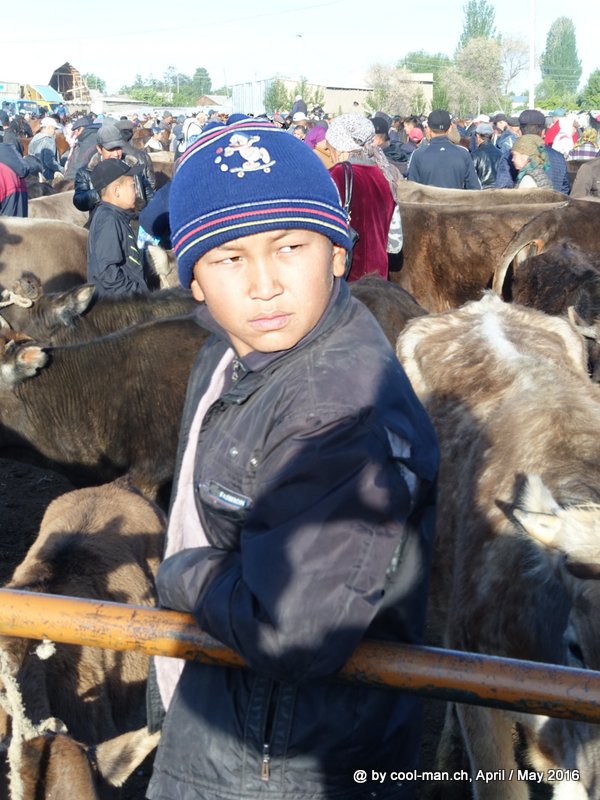 It is not for nothing that Kyrgyzstan is called the Switzerland of Central Asia. 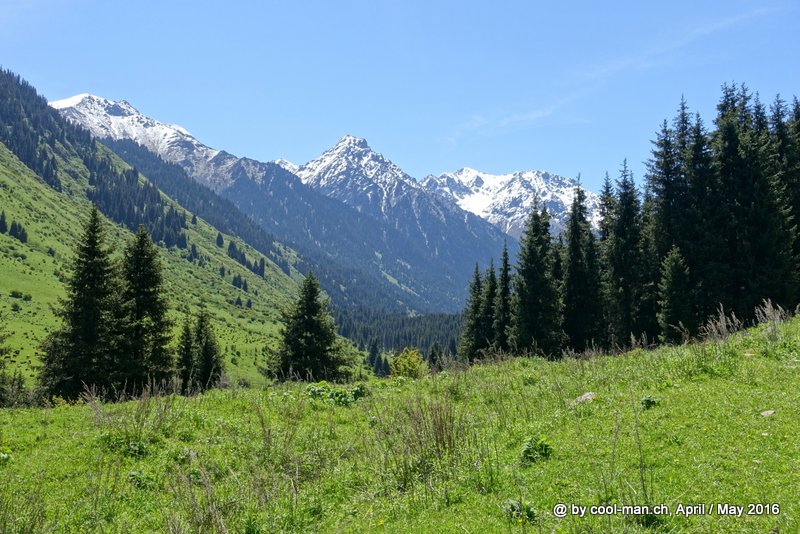 Afterwards I spent a few days in a small village at Issyk Kul Lake, where I lived with a family and experienced the generous Kyrgyz hospitality.

Soon it was time to return to Bishkek and spend the last days in the capital. I liked Bishkek from the beginning. The people are friendly and many restaurants are good and cheap. In the middle of the city there is a large square with the equestrian statue of Manas, the hero of the national poem. It is the longest in the world with over 500,000 lines. The square is surrounded by parks. In one is a larger-than-life Lenin statue. Not far away, Marx and Engels in bronze continue to discuss their theories. The city is accessible by minibuses called Marschrutkas. There are hundreds of lines that take people to any place in the city without changing buses. Thanks to the mobile phone app Bus.kg it was easy for me to find the right bus. This app was very intuitive to use and provided exactly the information I needed. My location was shown on a map of Bishkek. Now I could touch the start and end point of my bus journey and the lines that were suitable for me appeared on the map. If only all cities had this app. Worth seeing was also the huge Osh bazaar. A near hiking area in the middle of mountains is only 45 minutes by car away in the Ala Archa National Park. 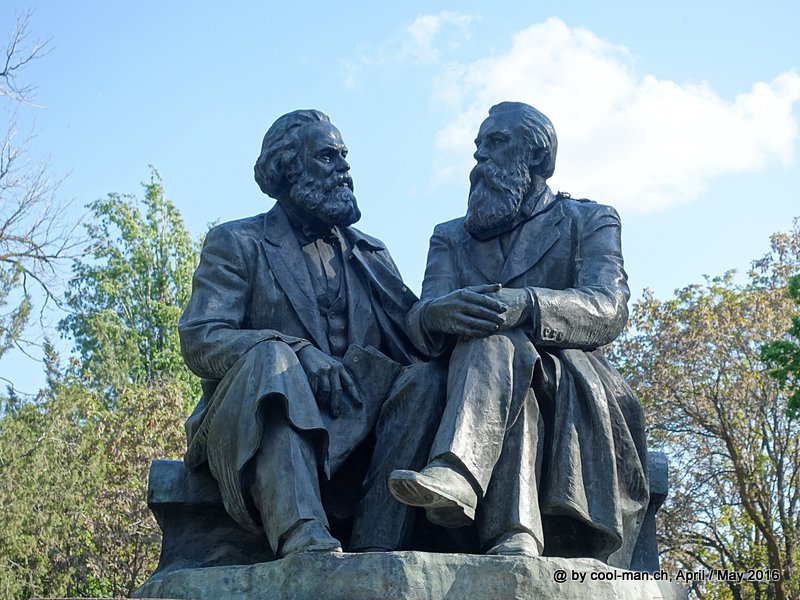 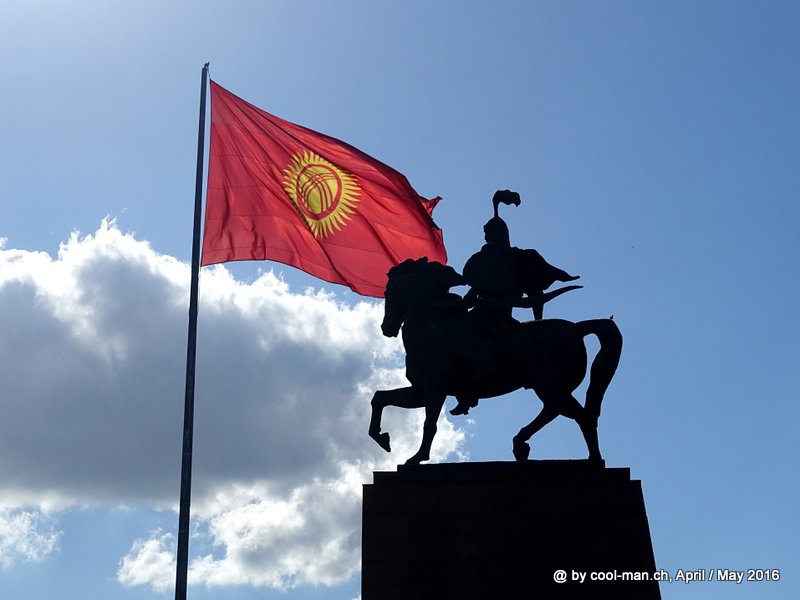 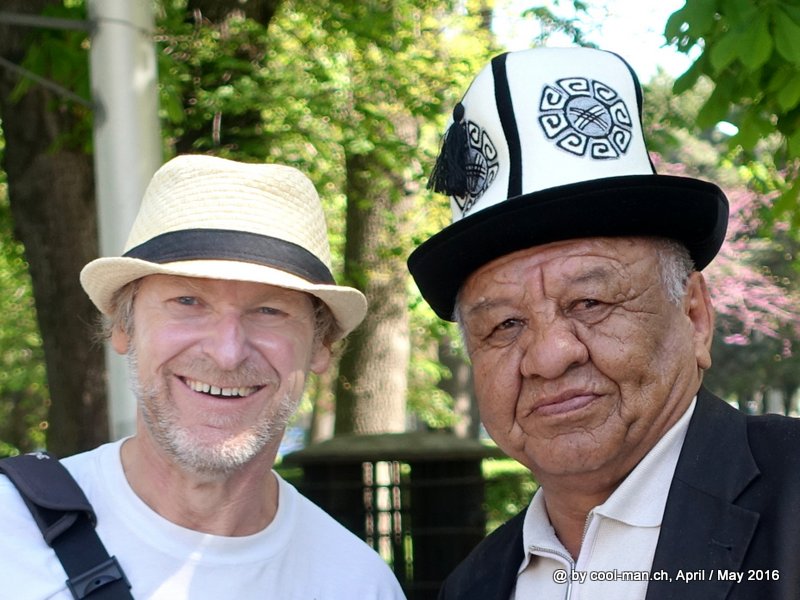 An impressive journey through Argentina, Uruguay, Chile, Peru, the Philippines, Indonesia, Dubai, Uzbekistan and Kyrgyzstan came to an end. Apart from the incident with the cleaning lady in Mendoza, nothing unpleasant happened to me. On the contrary, especially in Central Asia I was welcomed very generously.