The Moluccas and Raja Ampat in the Indonesian province of Papua have been on my radar for a long time as they offer one of the best underwater worlds. While on most of Indonesia’s islands the rainy season is during the European winter, for the Moluccas and Papua the winter is an ideal travel period.

First I flew to Ambon, the capital of the Moluccas. It is a typical Indonesian city without any noteworthy sights, but with many, partly dangerous holes on and beside the pavements. As the ferry only sails to the Banda Islands twice a week, I spent one day longer than planned in Ambon. This gave me time to buy a SIM card to access the Internet via the mobile phone network. On the islands of Papua it was the only way to go online.

After a five hour boat trip I reached the Banda Islands, an archipelago consisting of seven small islands. Nowadays only a few Dutch forts remind one of the times when nutmeg only grew here and the Dutch East Indian Company, abbreviated VOC, made huge profits trading this spice and others like pepper, cloves and cinnamon. To gain the monopoly over the nutmeg trade, the VOC did not shy away from murdering the entire upper class of Banda and a large part of the population. Those who survived were forced to work as slaves in the spice plantations.

It was on Banda that I first saw nutmeg as the seed of the nutmeg tree. The seed is surrounded by a reddish coating.

The nutmeg inside the reddish coating is the seed of the nutmeg tree. 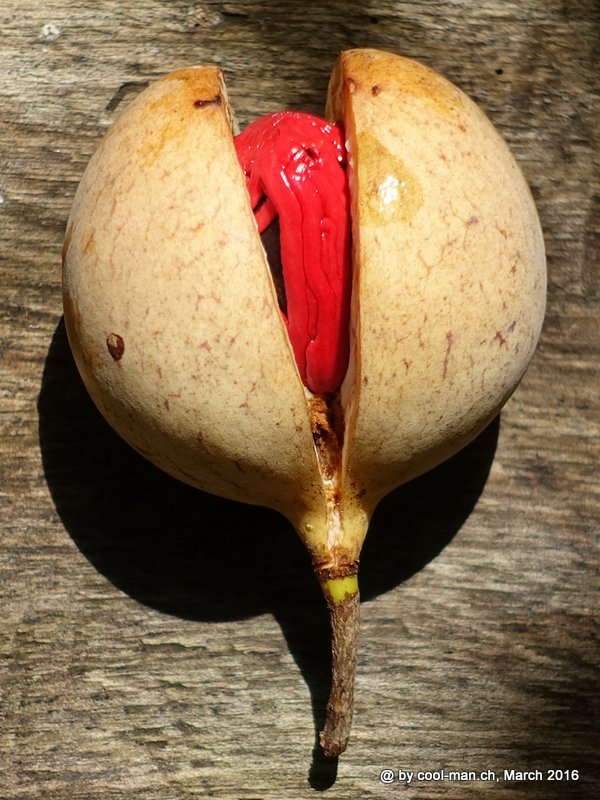 Also new for me was that cinnamon is extracted from the dried bark of cinnamon trees.

Cinnamon is a spice from the dried bark of cinnamon trees. 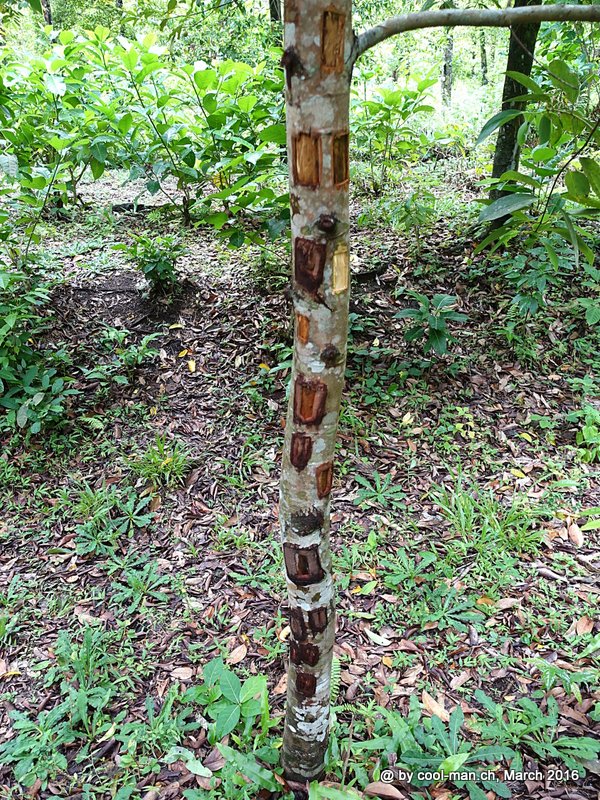 I liked the small town of Banda Neira. There was hardly any traffic. On foot one could discover the place in half an hour.

The VOC logo of the Vereenigde Oost-Indische Compagnie (United East Indian Company) at the entrance of the church in Banda Neira.

The two former freedom fighters Hatta and Syahrir and later Prime Ministers of Indonesia were exiled to Banda by the Dutch before independence. The two lived in the most beautiful houses in the village and influenced the inhabitants of Banda to this day through their educational initiatives and freedom ideas. A young American woman has fallen in love with a local and runs a cafe with her sweetheart that offers fresh fruit juices and good food. I also met some interesting tourists. Two refreshing Dutchwomen told me about their travels, including a hippie bus trip through Afghanistan in the 70s.

The best snorkeling spot in the area is off the island of Hatta. Unfortunately it was raining on the day that the snorkeling tour was planned, so that it could not be carried out. This gave me the opportunity to talk to an American-British couple who had traveled to Kyrgyzstan and Uzbekistan and told me about their experiences there. In return, I gave them tips about traveling to the Philippines. Kyrgyzstan and Uzbekistan were my next destinations after Dubai.

As I soon had to board the ship back to Ambon, this time I was the tourist who stayed less long than others in one place. My main goal on this trip was to see if I liked these places so that I could stay longer on a next trip.

One day after my departure, the Vice President of Indonesia came to Banda. Already days before ships and ferries reached Banda, which brought security forces, police and military vehicles to this small island. Meanwhile the locals decorated the town and rehearsed welcome dances.

Next I flew to the Indonesian province of Papua.

At Sorong airport I noticed an elderly western lady carrying four bags of hand luggage, although only one was allowed. I got into a conversation with her. Helga was an Austrian retired teacher who had been traveling in Indonesia for several months. She had been in this area before and already knew her way around. So I joined her. She had already organized the transfer to the city. The hotel turned out to be a cheap hotel contaminated with cockroaches. I hadn’t slept in such a dilapidated condition for a long time. I comforted myself with the fact that I would spend only one night there and that the airport transfer was free. After all, the bed and the bathroom were clean.

At the harbour of Sorong. The drying of the fish makes them last longer. 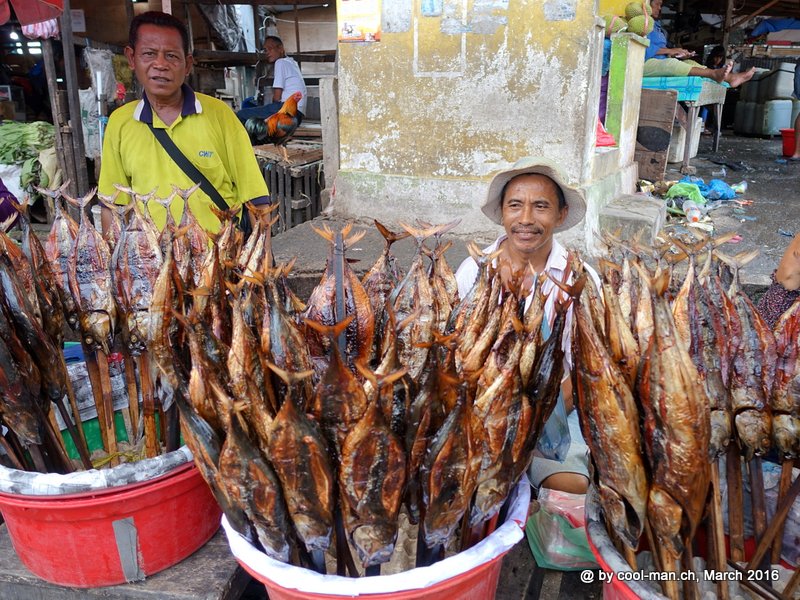 The next morning we took the ferry to Waisai, the capital of the archipelago of Raja Ampat. There the boat of our resort picked us up and took us to the island Kri. I knew that this resort would be very basic. There was a very expensive alternative a few hundred meters along the beach, but also in this so-called luxury resort people slept in simple bamboo / straw huts. It was several times more expensive without offering so much more. While Helga decided on a cheaper cabin in the second row, I lived in a bungalow with my own bathroom right at the beach. As it was a bit secluded, I hardly suffered from rats. All visitors of this island came not because of the resorts, but because of the coral reef with the innumerable fish, which extended over the whole island length. As the photos show, the underwater life was still intact. Beside all the corals there were countless small reef fish, partly in large shoals. Besides I saw an octopus, a sea snake and bigger fish like reef sharks, barracudas, parrotfish, manta rays and huge mackerels. I also met turtles regularly. Every snorkeling trip was a new experience. There were other great snorkeling spots in the area, which the guests of the resort visited together by boat on full or half day tours. Each of these places had its peculiarities. Correspondingly other corals and underwater creatures were found. I already got to know the underwater world at some places, but Raja Ampat was by far the best.

All underwater pictures are from snorkeling in Raja Ampat, Papua. 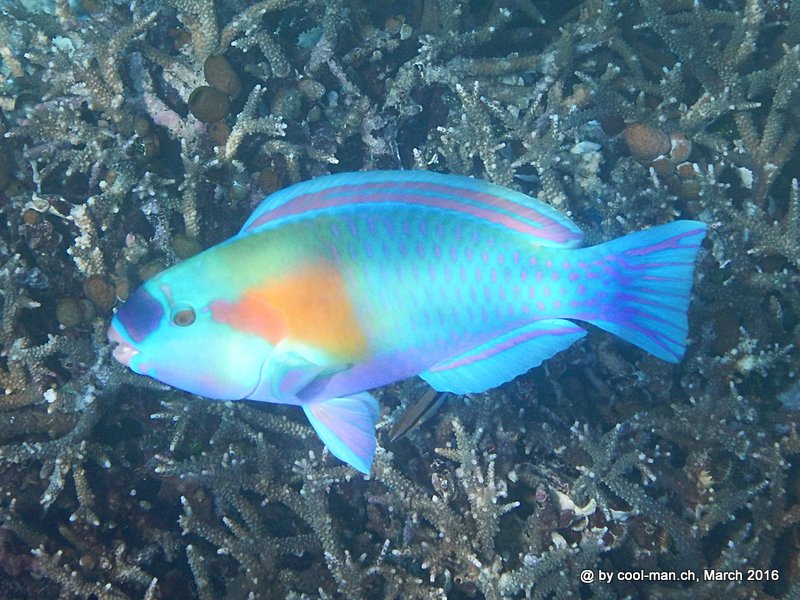 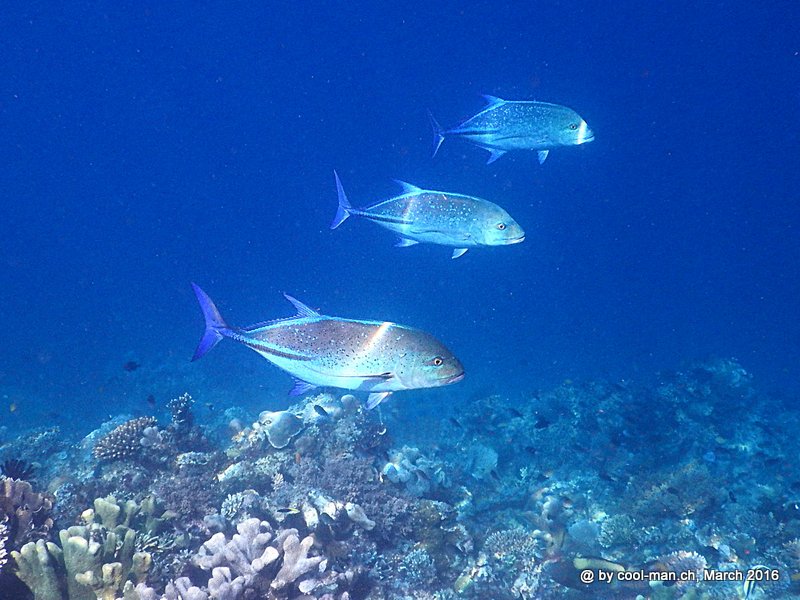 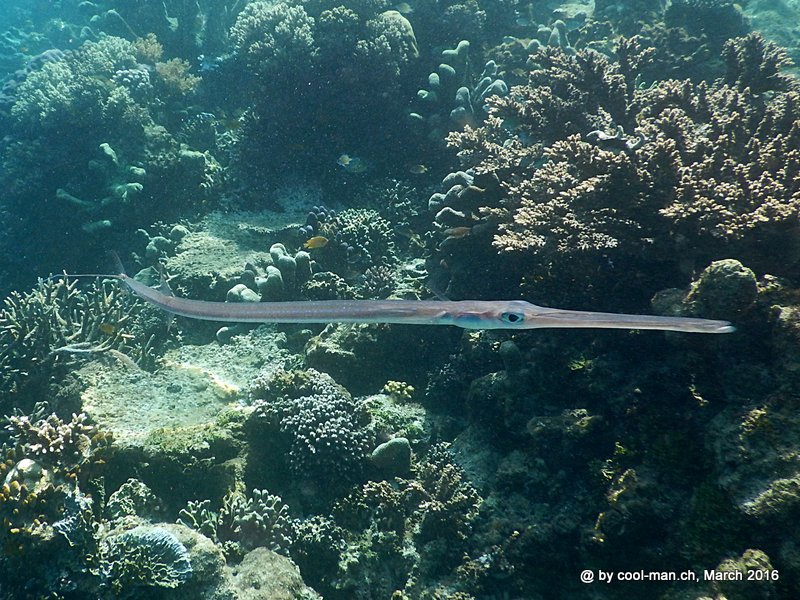 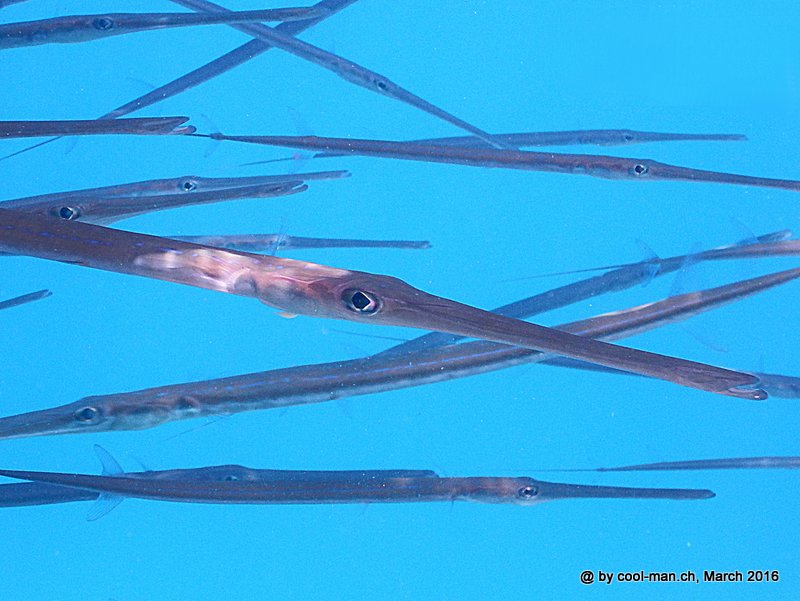 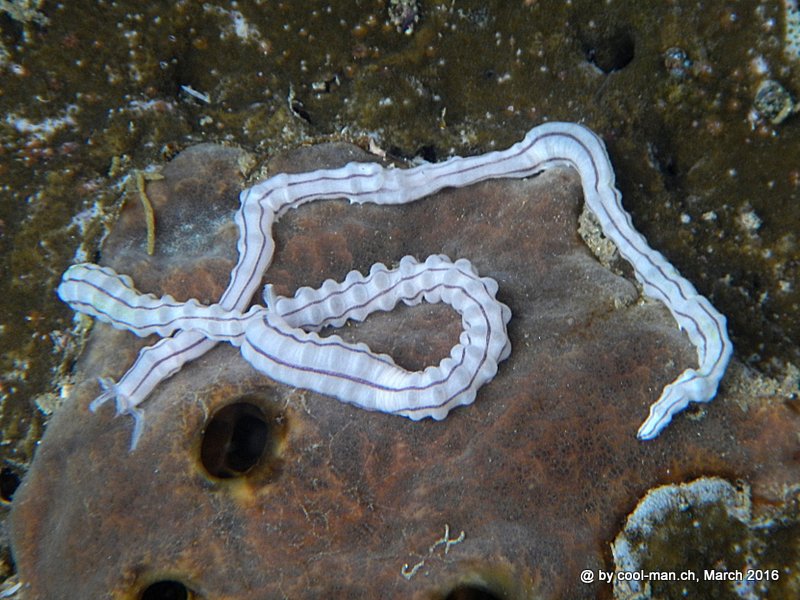 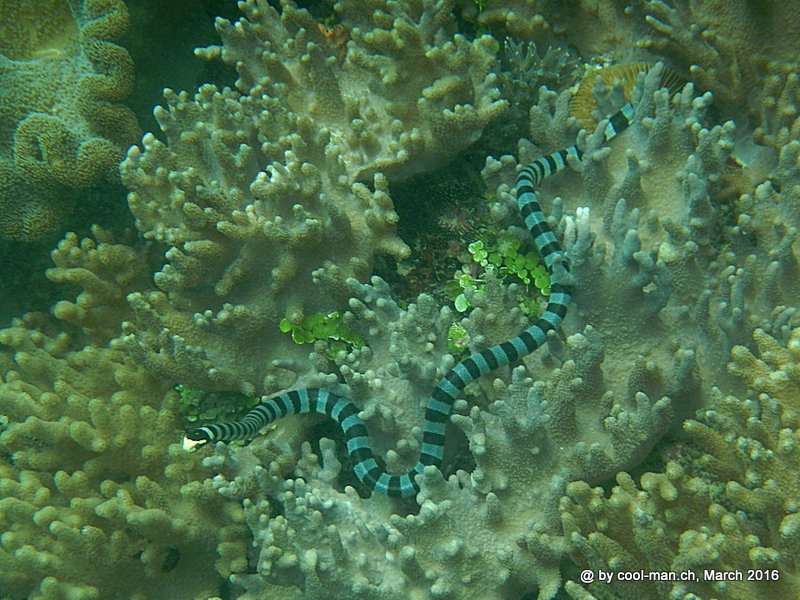 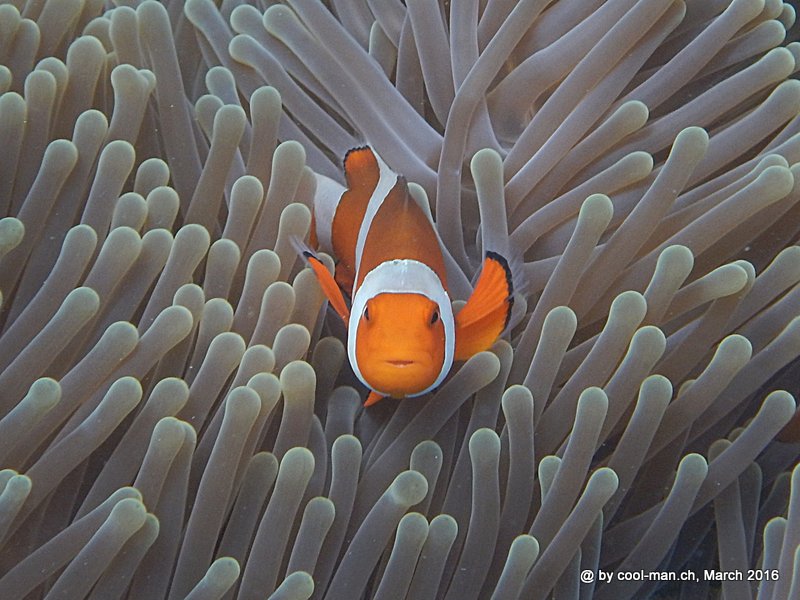 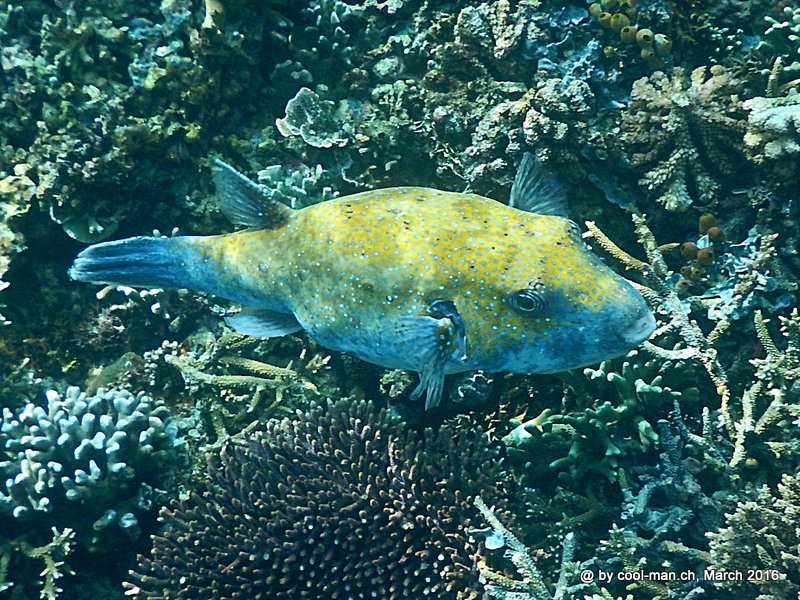 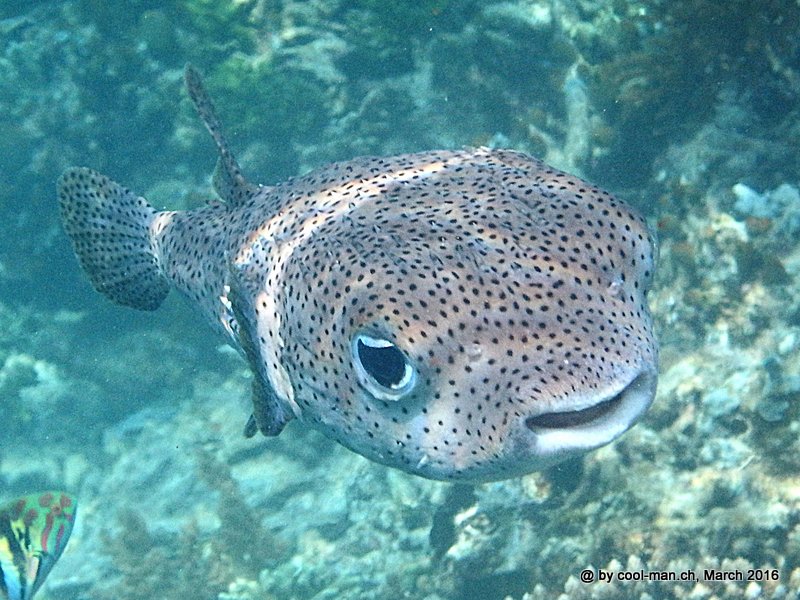 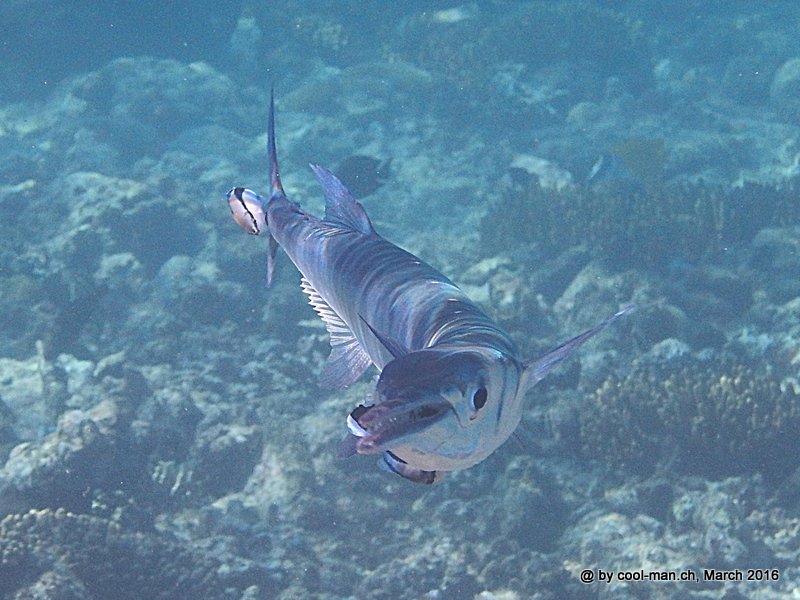 … and with cleaner wrasse 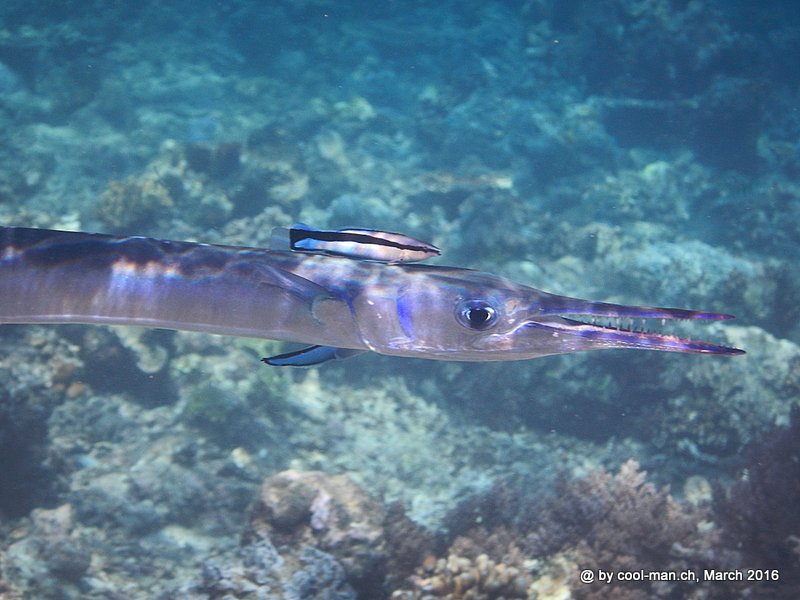 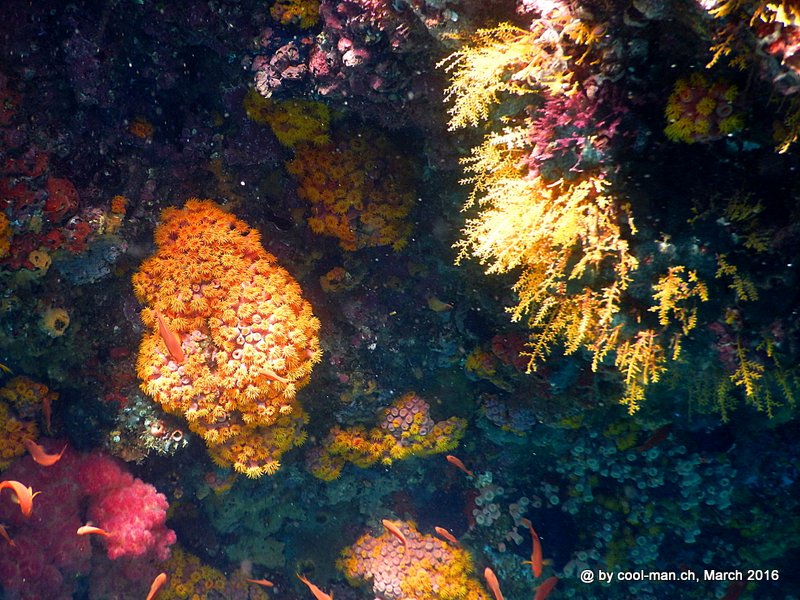 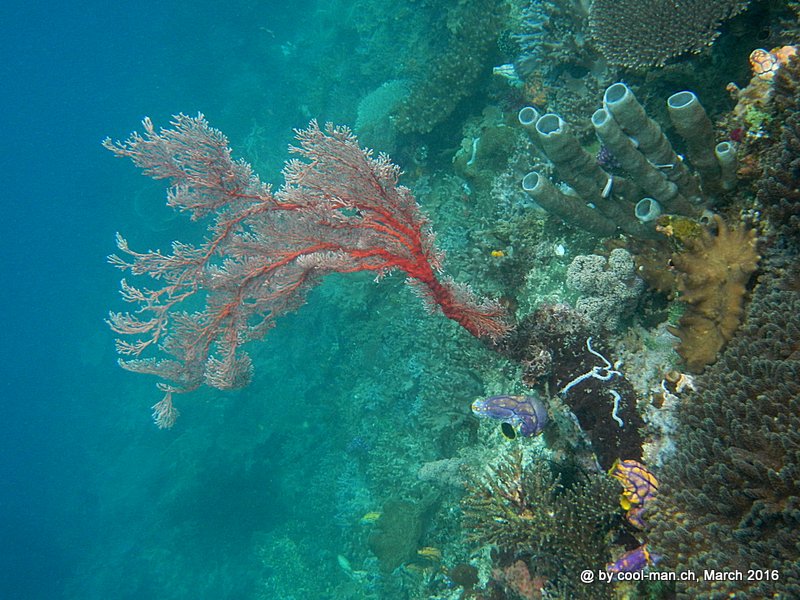 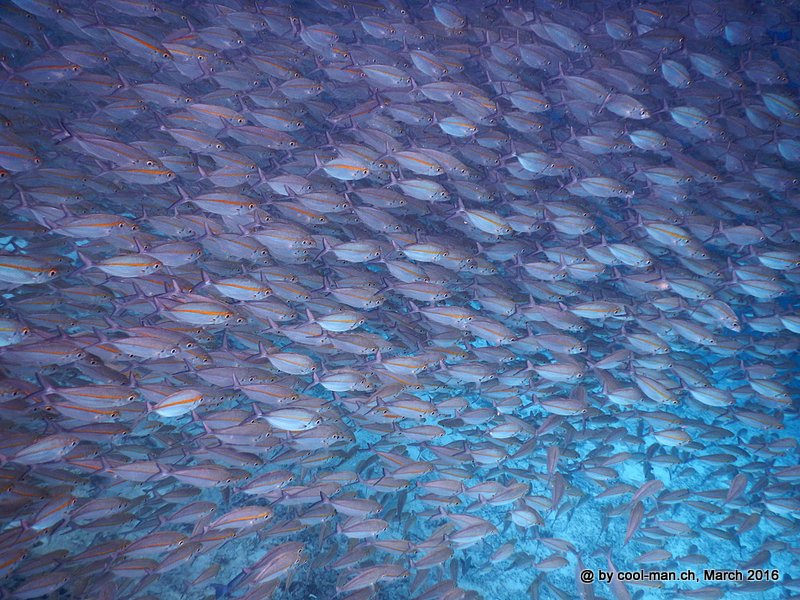 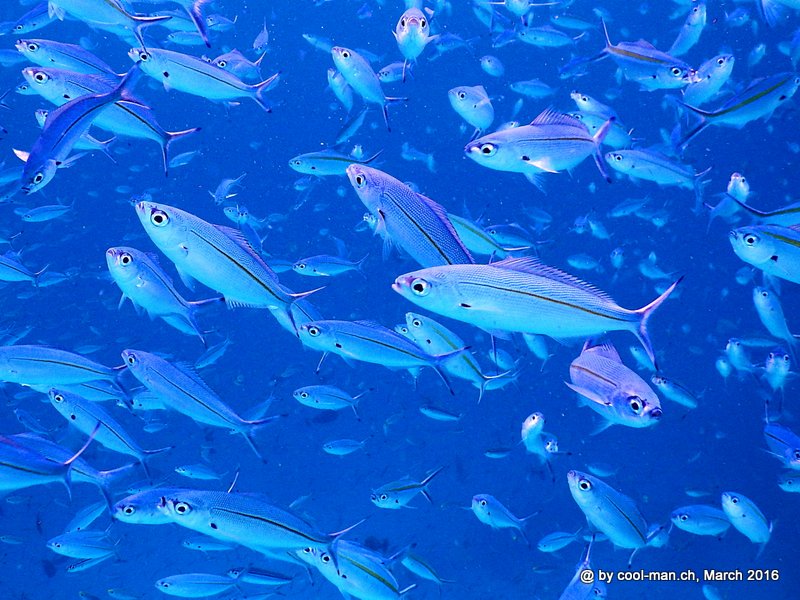 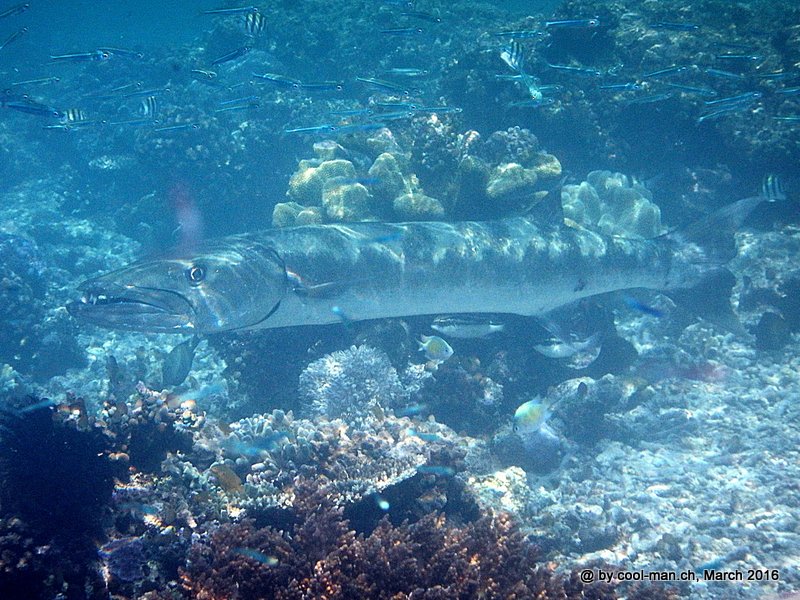 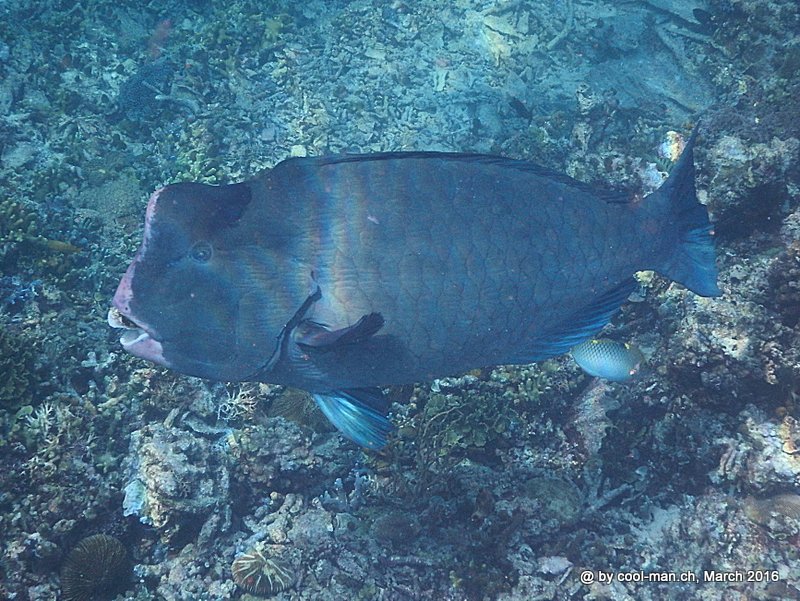 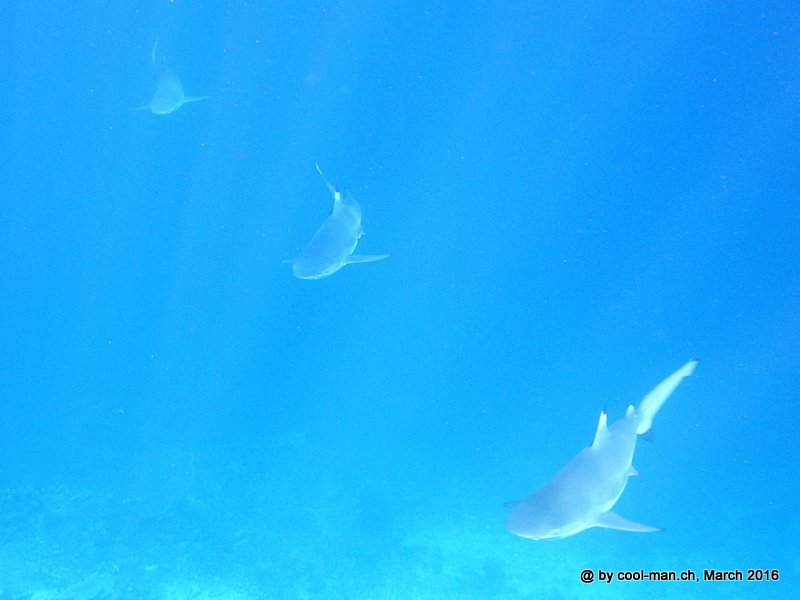 And above the water:

The children are already enthusiastic fishermen 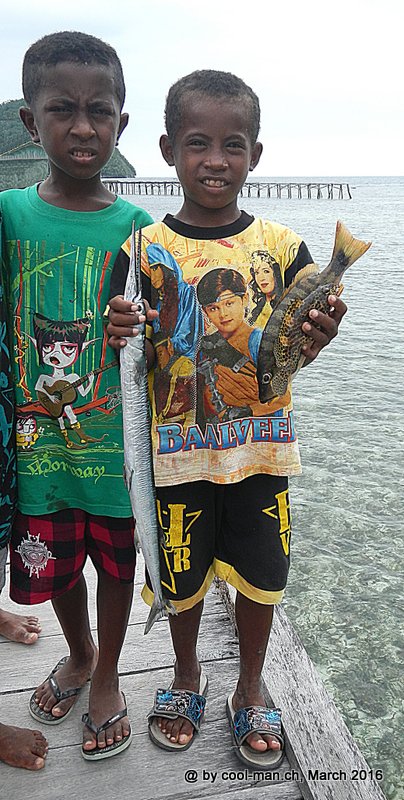 My simple bungalow directly at the sea

Another resort on the same beach

On a boat trip I saw this simple lodging facility 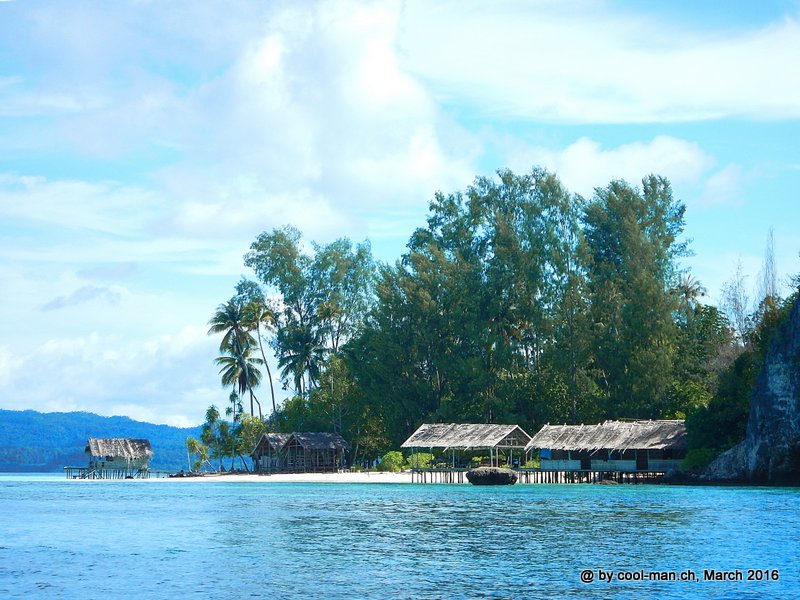 Another resort in the sunset

I often encountered diving boats in the style of historical sailing ships. 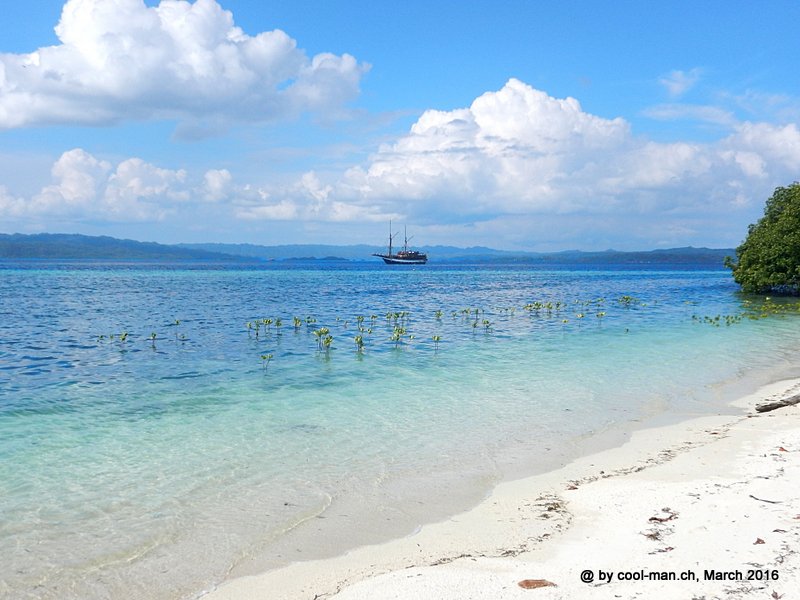 A sandbank in the sea

Indonesia and Papua in particular are still quite backward. The last step of some stairs has a different height, because the builder could not build the steps evenly. At the airport the clocks show different times and the many screens show a picture of the airport instead of the flight information. The charging station for mobile phones is marked in capital letters, but there are no power plugs.

Afterwards I spent some days in Dubai.