My next destination was Lima, the capital of Peru. Lima has become the gourmet capital of South America. As the country covers countless altitude and climate zones, it offers a wide variety of dishes. Among the ten best restaurants of the continent there are three restaurants in Lima, including the first and second place. As usual, only a few days before my arrival, I started to get familiar with the new destination. Soon I found out that I had to reserve at least one month in advance at the top restaurants. In the hope that someone would cancel at short notice, I still tried to get a table. Unfortunately without success. In addition, I arrived in Lima for a weekend and the top restaurants were closed on Sunday evening. Only one of the best restaurants in Lima, which had not made it into the first 50 of South America, was open every day as a hotel restaurant. First I visited La Locanda in the Swissotel Lima. The menu with seven courses was so excellent that it did not have to shy away from a comparison with French Gault Millau restaurants and that for a third of the price.

In the restaurant Maido, which occupies the number 7 in South America, I could order all dishes and the menu without table reservation at the bar, so that I still could enjoy the culinary art of this restaurant. The Maido is a Japanese restaurant with sushi, sashimi and miso soup with clear Peruvian influences, both in the food and in the way it is prepared. But sushi is not just rice with a fish on it. Only the sauces are a taste experience in themselves. In addition, there are other specialties such as eggs of various fish, which are served on the sushi pieces. I asked the waiter to put a menu together for me and was not disappointed. Unfortunately it is impossible to describe these culinary delights here.

A dish in the restaurant Maido in Lima

At the two first-class restaurants of South America “Astrid y Gastón” and “Central” I had no chance to reserve a table at such short notice. After all, in the Central there was the possibility to try a reduced selection of food at the bar. As it is also one of the fifteen best restaurants in the world, I definitely wanted to pass by there. At the reception I mentioned that I wanted to reserve a table at short notice, but had no success. To my surprise they offered me a table and I could even order the seventeen-course menu “Mater Elevations” with the corresponding wine accompaniment, although this menu should also have been ordered in advance. I learned the explanation for this miraculous turn of events one day later. In order to be among the best restaurants in the world, not only the dishes have to be perfectly prepared. The restaurant must be extremely creative and offer the guest a total work of art in dishes and drinks that he had never experienced before. The Central succeeded in doing this perfectly. The whole menu consisted exclusively of Peruvian ingredients. Each course was assigned to a altitude zone from high mountains to below zero sea level (fish / seafood). Each course contained only ingredients from the respective altitude range. If it suited the altitude, the course was served on a polished stone corresponding to the height. Each course was a special experience, although not all courses tasted equally good to me. The wines also included top wines from Peru, of which I was very surprised. Like Swiss top wines the quantities are probably too small, so that these are distributed among friends and drunk in the own country. The breads consisted of a whole range of different types including a Coca bread, which were served on hot coals without the breads themselves charring. Thus it was clear to me that I would surely come back to Lima to visit the “Astrid y Gastón”. You can find the report about this Lima visit in January 2016 here.

I have no pictures of the restaurant Central. I did not find it appropriate to take pictures in this world-class restaurant.

On my last evening in Lima I visited the Maido again because I could order all delicacies there at the bar without having to make a reservation beforehand. Since one sat side by side with other gourmets at the bar, who were often alone on business, one quickly got into conversation. My neighbor was a Brazilian. He told me that the evening before he had to cancel a table reservation at Central at short notice due to an urgent business matter. What a coincidence! So I could tell him that thanks to him I had come to a table in the Central.

The days through I had enough time to visit the sights. Lima is a huge city. Many areas are poor, ugly and dangerous. Therefore I concentrated on the center with the historical buildings and the business district Miraflores that is situated at the sea.

The main square of Lima 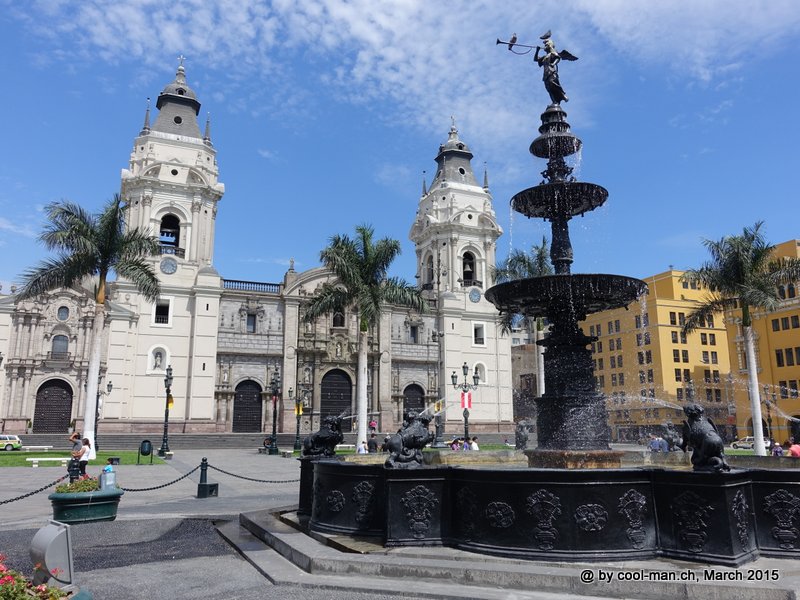 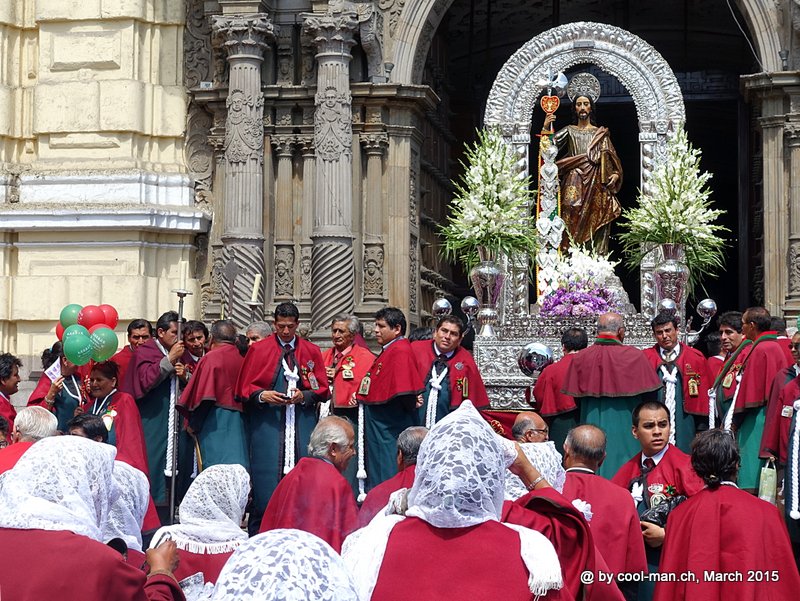 A vase depicting a human sacrifice. These were common with the Incas to appease the gods. 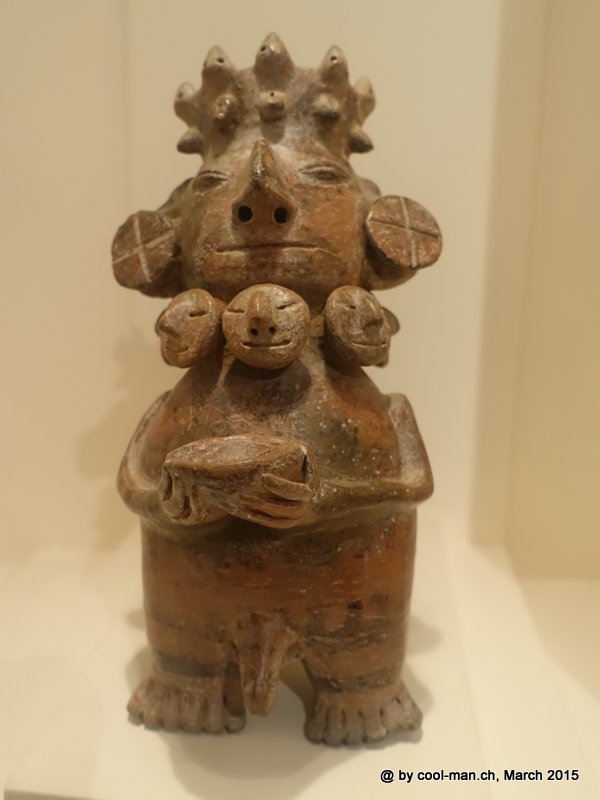 Golden jewelry worn during the holding of rituals. 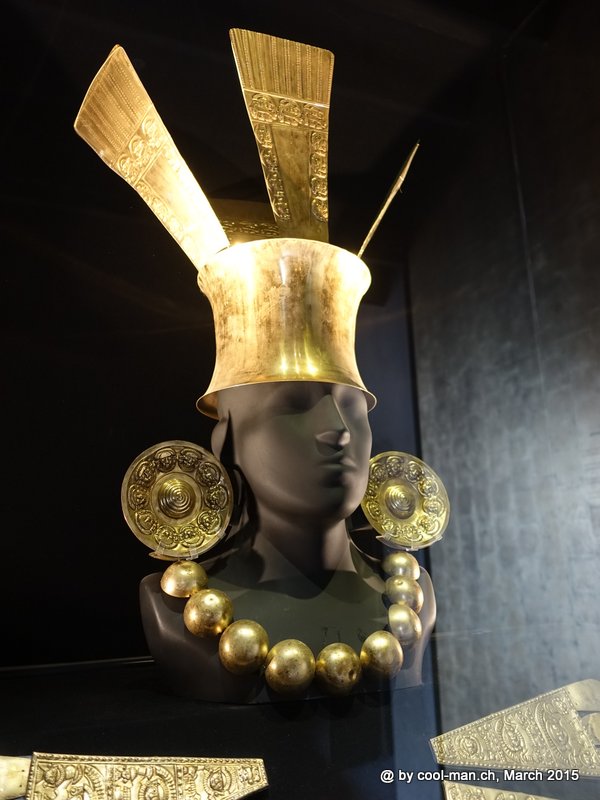 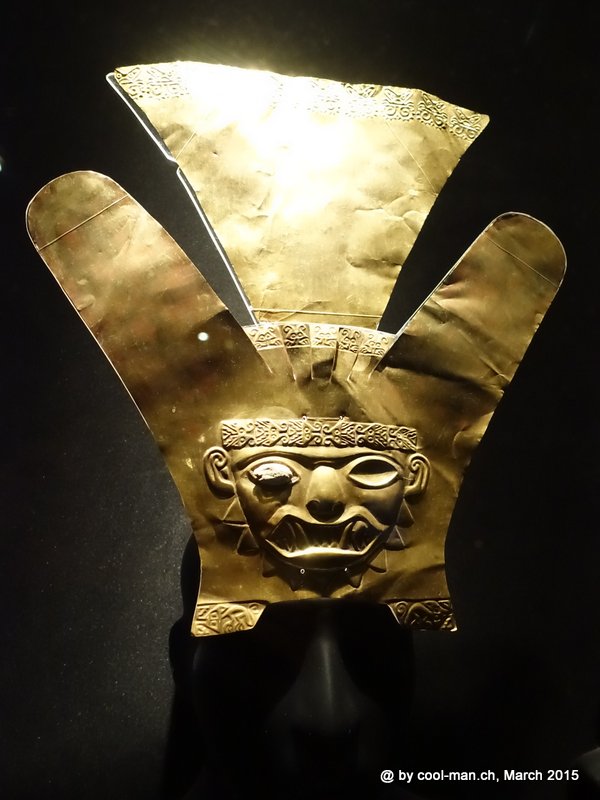 In the evening the people of Lima enjoyed the magic fountains (Fuente Magica). Several huge fountains were illuminated in different colors and offered great photo subjects. 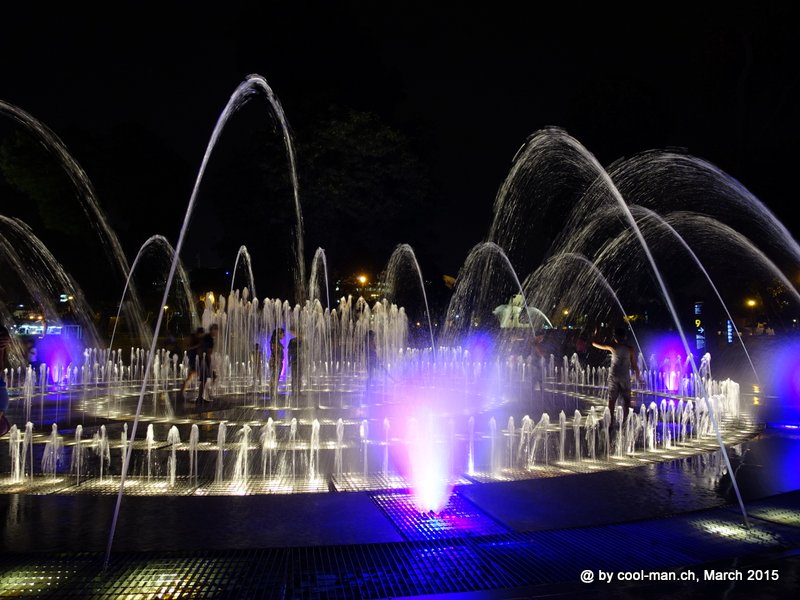 By plane I reached Cusco, the old Inca capital on 3’400 m.a.s.l. For the Spaniards Cusco was the starting point from which they advanced the colonization and Christianization of the entire Andes region. They built magnificent churches and monasteries on the ruins of Inca architecture. The Indians were forced to dismantle their own temples stone by stone and use the material for the Spanish buildings. What a humiliation. Guinea pig eating is common throughout the Peruvian and Bolivian Andes. Even in the cathedral of Cusco, the main course in the picture of the Last Supper is a guinea pig. If it was good enough for Jesus and his disciples, I wanted to try this dish as well. Although the animal looks so cute, its meat has a dense consistency.

So a guinea pig is served in Peru. 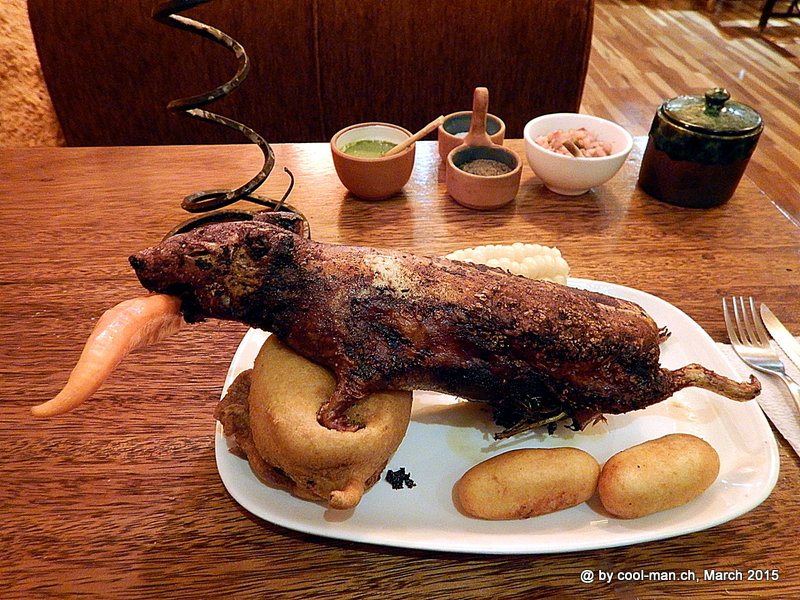 Machu Picchu was built on a steep mountain in a spectacular landscape. Around Machu Picchu rise other steep mountains separated by deep gorges through which wild rivers wind. There are several ways to reach the village of Aguas Caliente, which is closest to Machu Picchu. The 4-day hike on the Inca Trail is probably the most impressive, but also the most arduous. Since all 500 tickets for the Inca Trail were sold out on the days I considered, this option was no longer available. I decided on the simplest and most expensive option and took the train that followed the Rio Urubamba valley to Aguas Caliente in 1.5 hours. The village offers overnight accommodations for every budget as well as good restaurants. Since Machu Picchu was one of the highlights of my South America trip for me, I immediately bought entrance tickets for two days, which apparently nobody else did. For the first day I bought the additional option “Montana” so that I could climb one of the mountains around Machu Picchu and admire this UNESCO World Heritage Site from above.

The first buses from Aguas Caliente departed already at 5:30, so that one arrived in time for the opening of Machu Picchu at 6 o’clock. Since many people wanted to be on the first bus, I had to be already at 5 o’clock at the bus station in order to travel in the first or second bus to Machu Picchu. So early in the morning Machu Picchu was wrapped in fog, which was constantly moving, which reinforced the mystical impression. 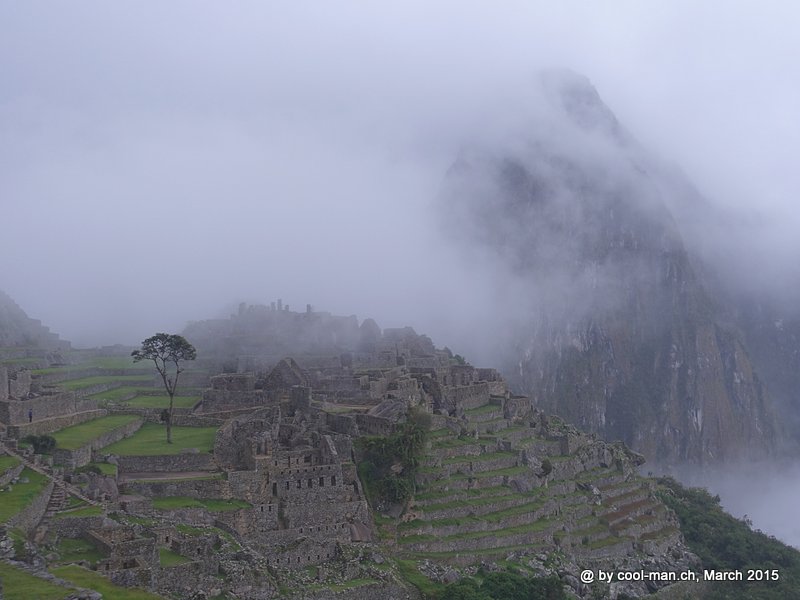 In the late morning the weather cleared up. Afterwards I enjoyed two perfect sunny days, which allowed me to take great photos, as the pictures show.

The famous view of Mach Picchu 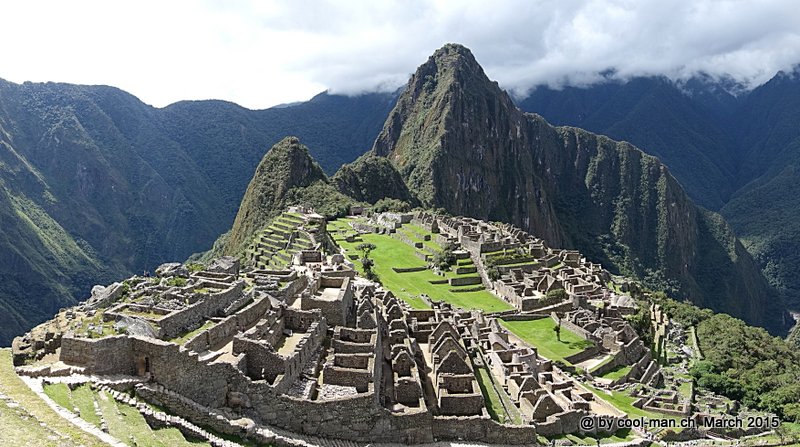 Machu Picchu seen from one of the surrounding mountains 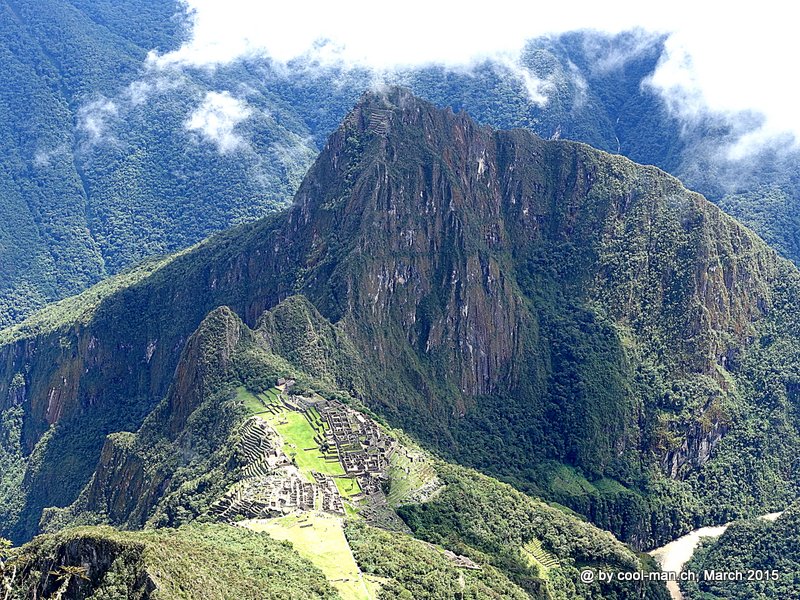 The stones of the walls are exactly matched to each other. Thus the wall can do without mortar and is earthquake-proof. 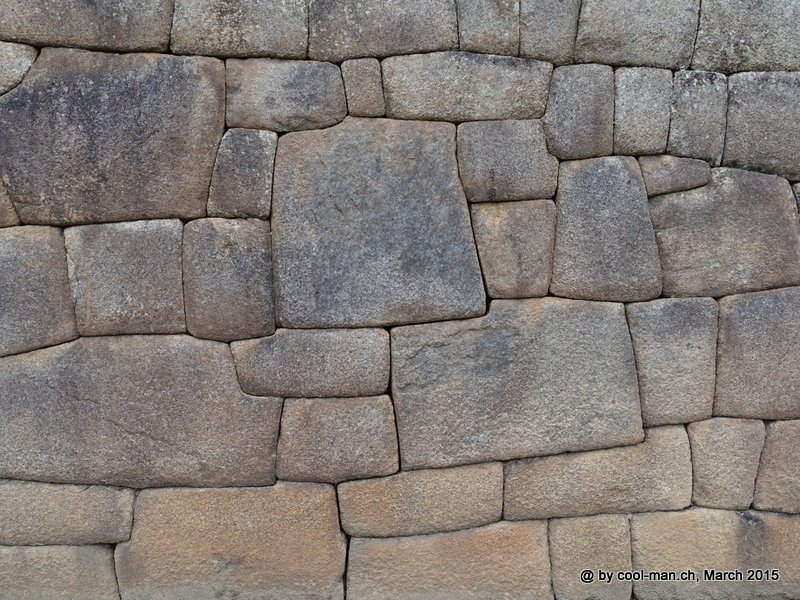 After intensive study of all known facts, the researchers assume that Machu Picchu was a retreat for the Inca elite. This place is about 1’000 meters lower than Cusco and therefore much more pleasant temperatures prevail than in the cool Cusco. Carrying metals meant power and was therefore only restricted to the highest political and religious leaders. So it was logical that the best metalworkers from the Inca Empire were brought to Machu Picchu to centrally perform their important function exclusively for this elite.

After visiting Machu Picchu I spent one week in the Sacred Valley. In this valley there are some historical smaller towns and Inca ruins. Here I visited local markets, in which all products of the region were offered.

On a market in Peru. Here there is only one kind of cheese. 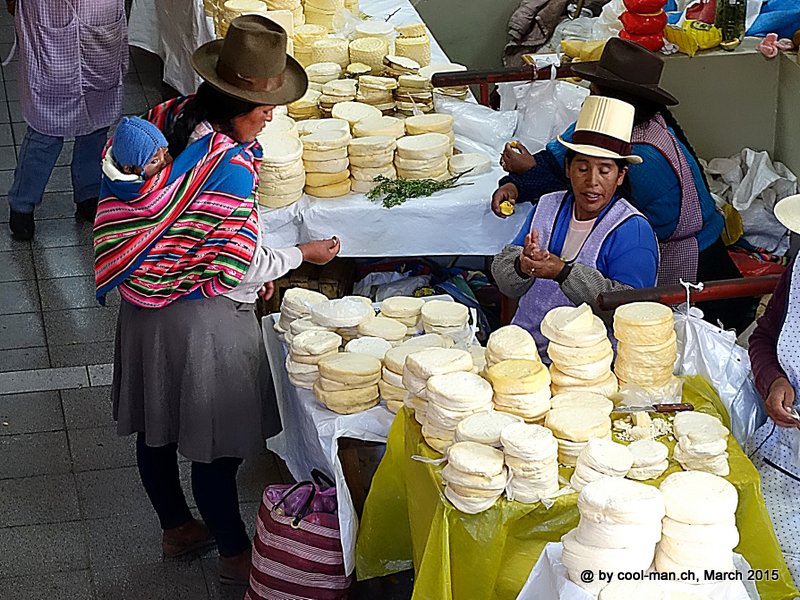 There are hundreds of varieties of corn in South America. 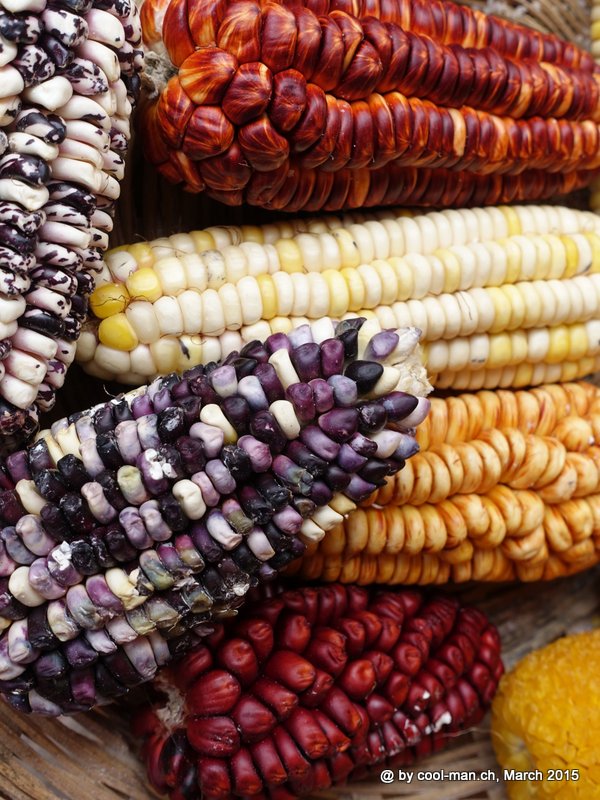 I really liked the chocolate made from local cocoa beans with coca solids. Another chocolate contained salt from the local salt mines to which I went together with an American. This man lived very simply. He gave me tips where to eat for 1.30 USD and buy used clothes.

The salt mines of Maras. The salt is obtained by evaporating the natural salt water in the sun. 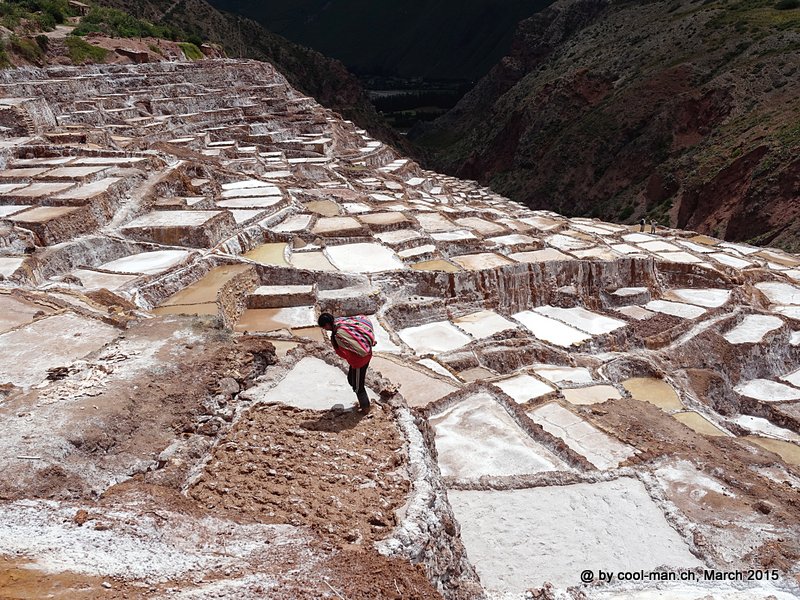 On a hike near the Sacred Valley close to Cusco. 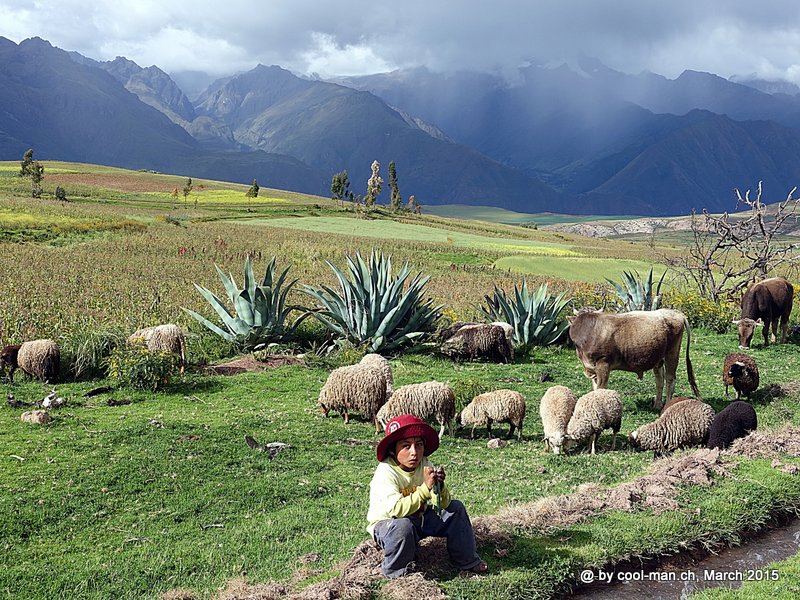 In the local buses it sometimes smelled like a cowshed. Not all Peruvians have access to fresh water at all times.

A seven hour bus journey led me from Cusco to the Peruvian side of Lake Titicaca. This lake is on approximately 3’800 m.a.s.l. and is thus the highest lake of the world with regular boat traffic. Unfortunately the weather was mostly rainy and cold. I made a two day trip to the lake. First we visited people who live on specially made reed islands and sail the lake with reed boats.

A reed island on Lake Tititcaca. 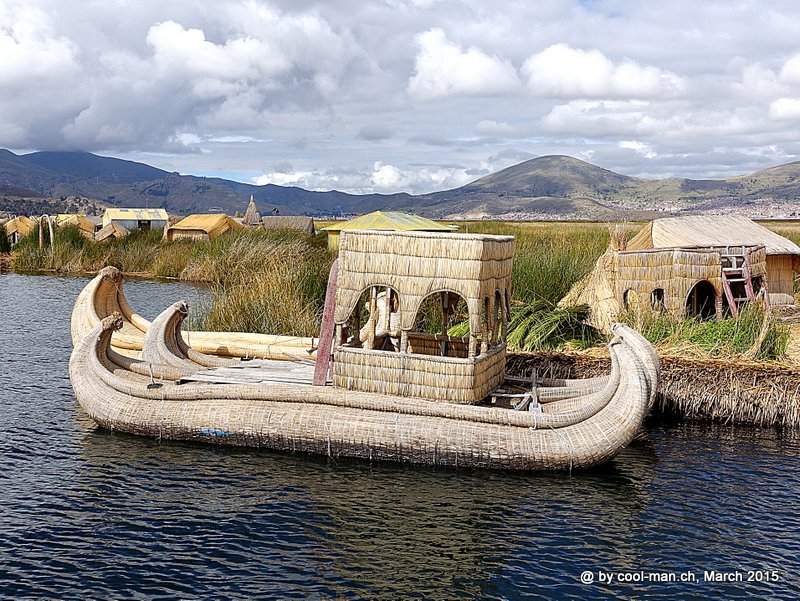 As reeds soak up water over time, the islands and boats have to be renewed every six months, which is very costly. On the other hand, these people get very old because they feed on fish every day, don’t drink alcohol and breathe very clean air. And they don’t know any stress on the lake. We spent the night with families. The food was very simple and there was no shower in the whole house. A few years ago the families received solar panels so they could have a little light at night and recharge their mobile phones. Despite the simple life, they always have a laugh on their face.

A resident of Amantani Island on Lake Titicaca 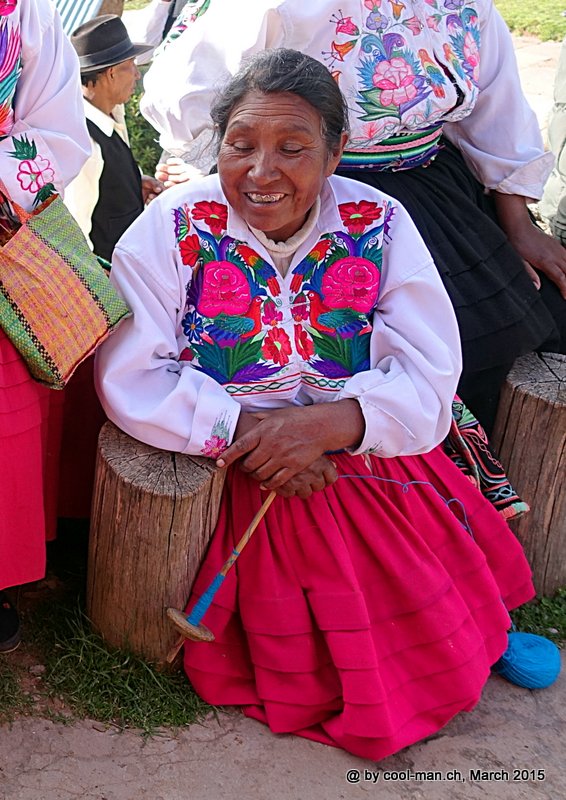 Back on the mainland again, I took the bus to the Bolivian side of the lake. The cloudy weather intensified the desolation of this area. Everywhere there were half-finished houses without windows and doors like ruins in the landscape. Armoring irons rose openly into the sky. The bricks were neither plastered nor painted, because they lacked the money. There was rubbish everywhere.