Although I leave Switzerland in winter to escape the cold, this time I was drawn to an area that is significantly colder than Switzerland: PATAGONIA. A name that made me long for nature, wilderness and endless expanses. This destination had been on my list for a long time. Unfortunately, my friends weren’t so enthusiastic about it, so I decided not to go until now, because it’s not so much fun alone. Only when two colleagues wanted to travel to Argentina did I spontaneously join them.

I was not disappointed, although the weather is colder and rainer than I expected for the season (it is here at the beginning of summer). You don’t leave the house without a winter jacket. On my arrival I naively asked the reception for the weather forecast for the next day. The lady only smiled. Soon I knew why. Usually at least three of the following four weather situations occur on one day: sun, cloudy, rain and snow. In addition, the wind blows often and stormily.

Around Calafate and El Chalten in Argentina and near Puerto Natales in Chile there are great trekking areas. The mountains are more impressive than in Switzerland, the glaciers are closer and often end in their own glacial lakes or in the sea. If one is lucky, one can observe an ice break into the water. This is how the icebergs form on the lakes. The wild nature combined with the unpredictable weather is the attraction of this area. There are probably not many places where one sees icebergs swimming by on a lake during dinner.

The food is better than expected (probably due to the large number of Italians who immigrated to Argentina). Yes, also the steaks … And what could be more beautiful than to end the evening after the trekking with a Late Harvest sweet wine.

The treks were great experiences, with rain and snow, storm winds, tired feet (trekking time up to 10 hours a day, when one day released the mountains) and tents at minus temperatures (rattle, rattle). Nevertheless we were very lucky with the weather. Many trekkers don’t see the highlights like the Fitz Roy, the Cerro Torre or the Torres del Paine because of bad weather. We have seen everything! 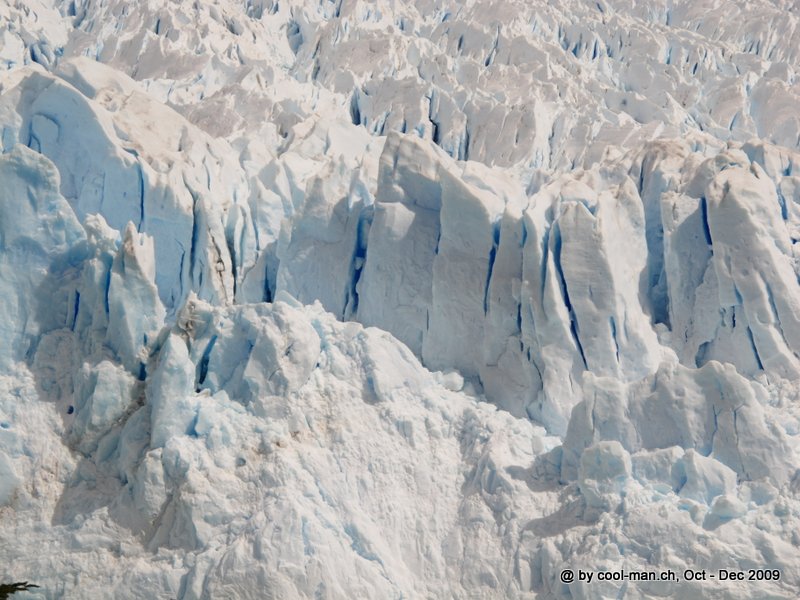 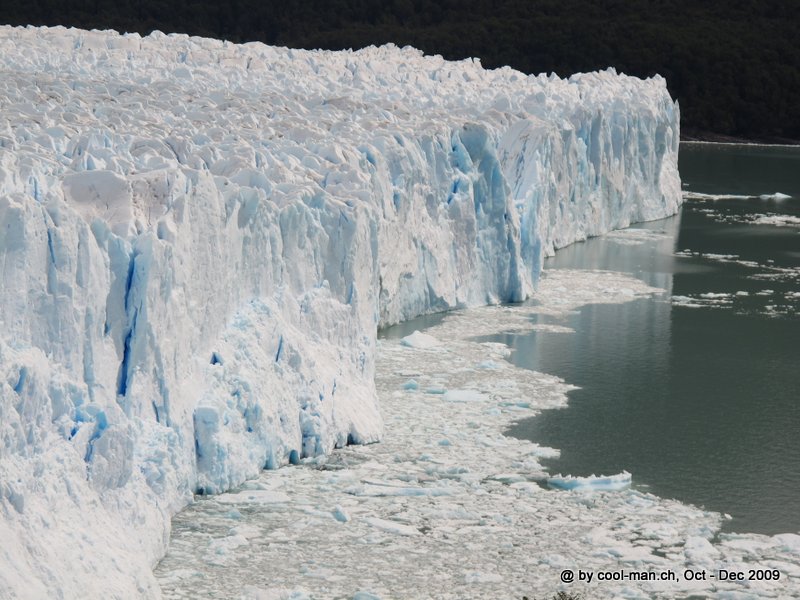 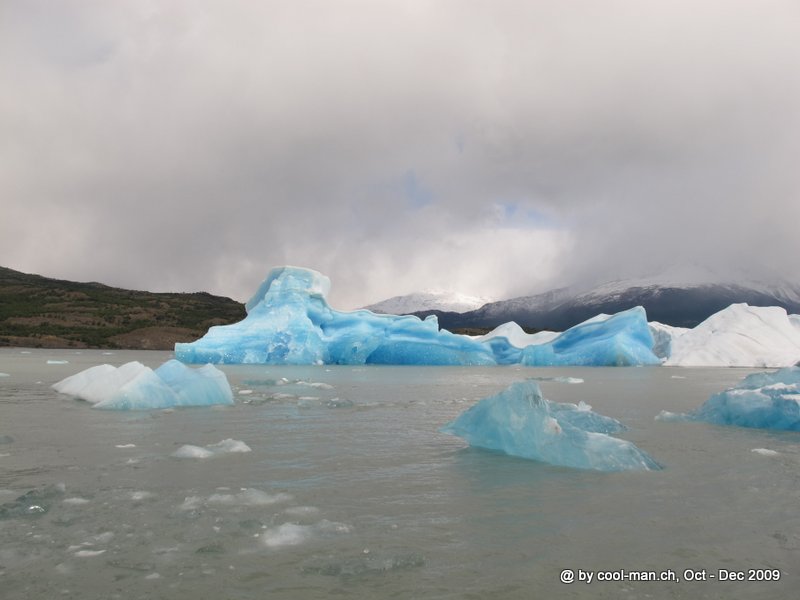 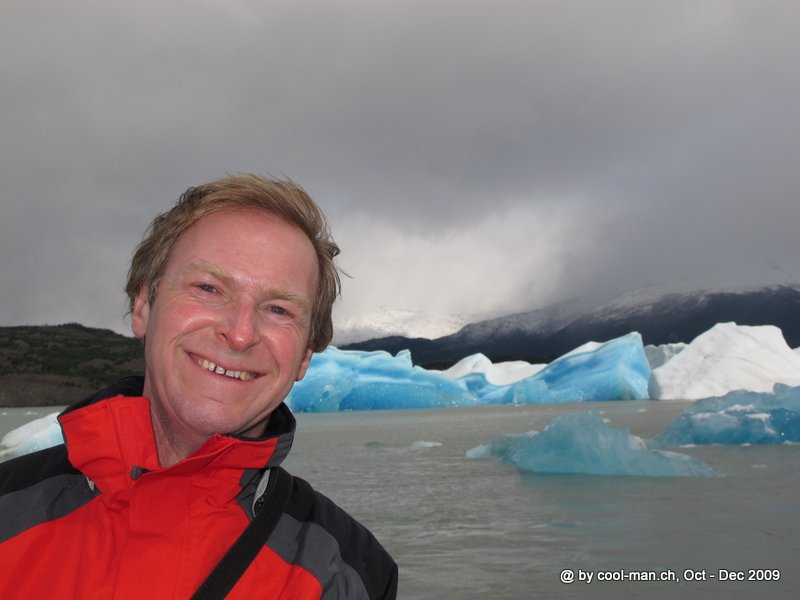 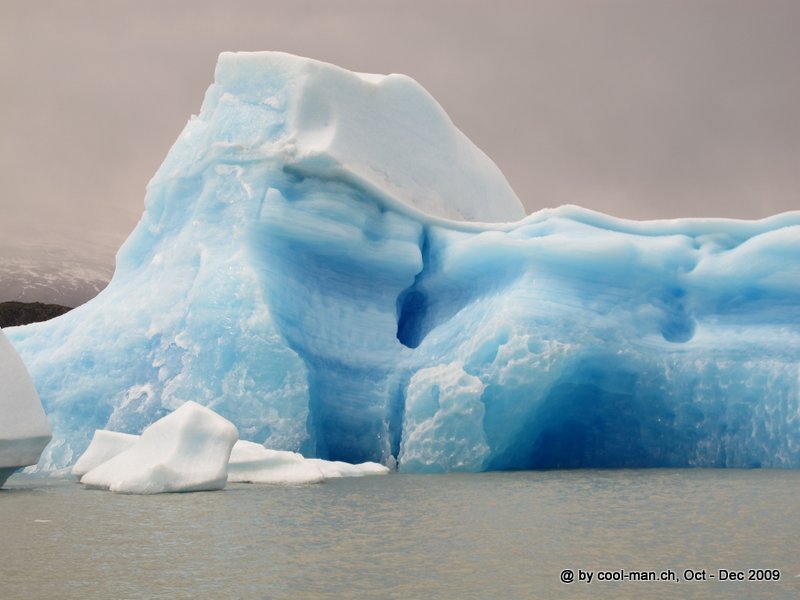 My next destination was El Chalten. Nearby is the mountain Fitz Roy with its famous steep face. 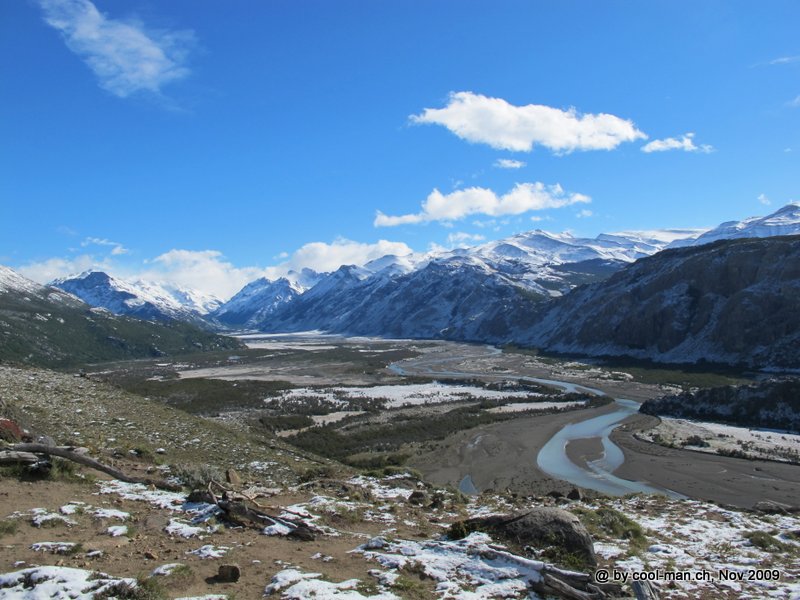 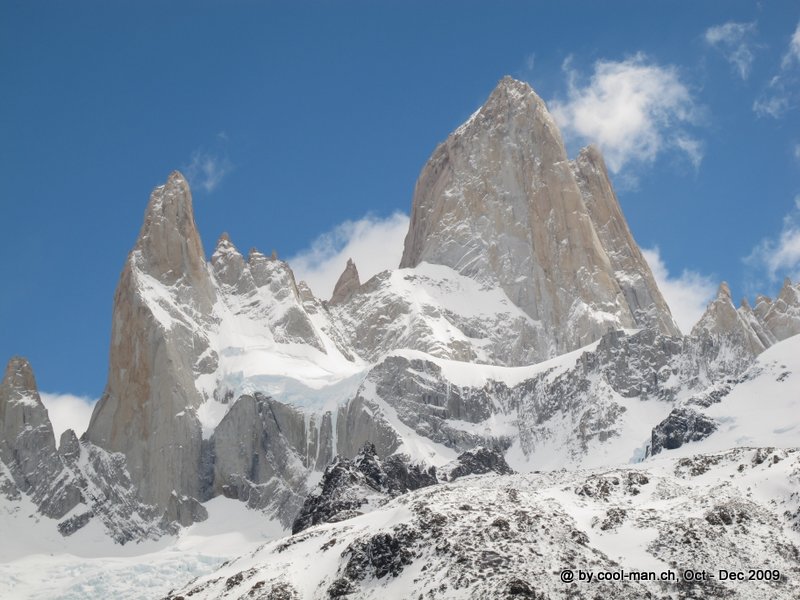 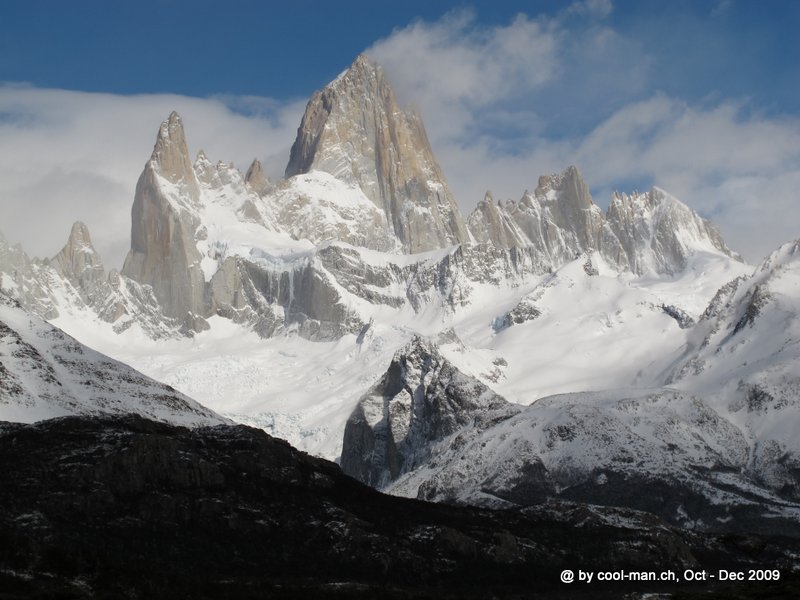 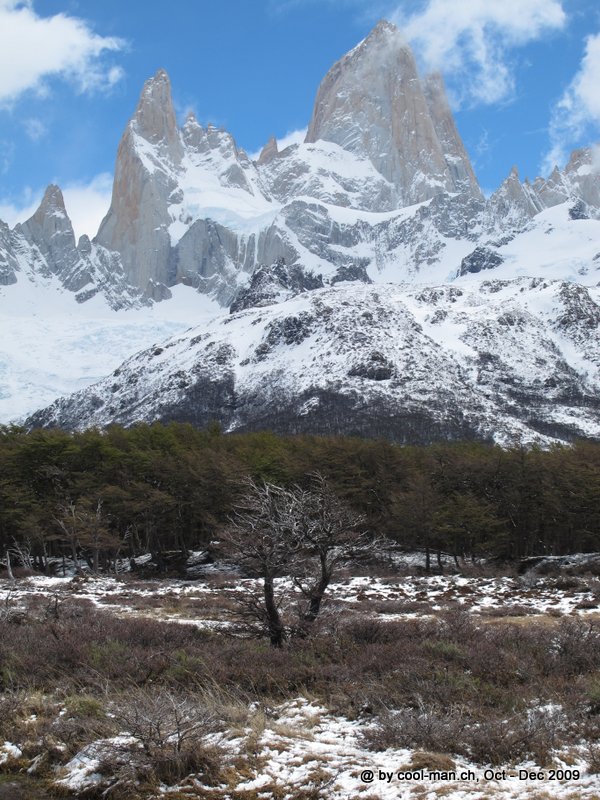 After my Chile program I traveled over the Andes (in the south they are no longer high; the pass was 1’350 m.a.s.l.) to San Carlos de Bariloche, Argentina, just called Bariloche. Finally sunshine again. Wonderful! It seems to me like St. Moritz Argentina’s. The big difference to St. Moritz in Switzerland is that there are more chocolate shops and Bernhardiner dogs here. I have seen hotels with the names Interlaken, Gstaad and Crans Montana. Many Germans (and probably also some Swiss) have emigrated to this area as well, with all its rather positive consequences. It is a great combination of lakes and mountains, with the mountain Cerro Otto as one of the excursion destinations. From the revolving restaurant at the top you have a phenomenal view. 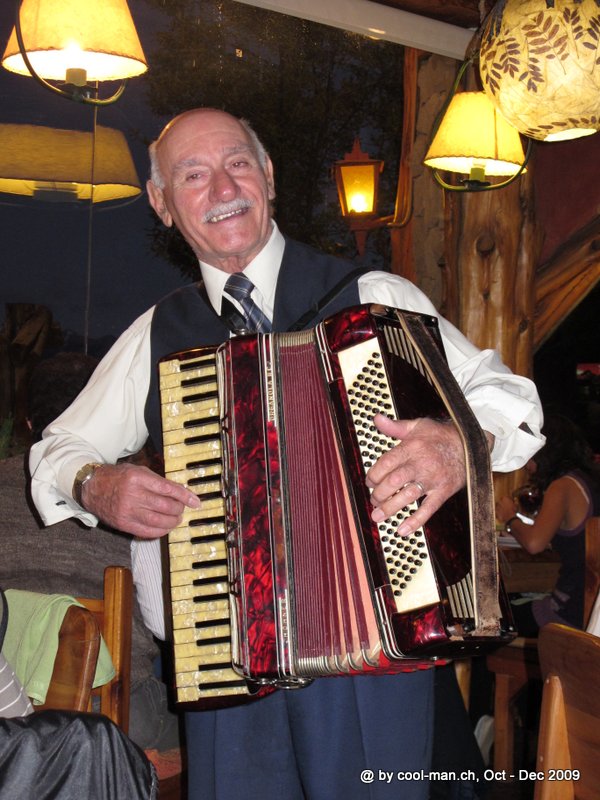 The Hotel Crans Montana takes its name from a Swiss village in the mountains. 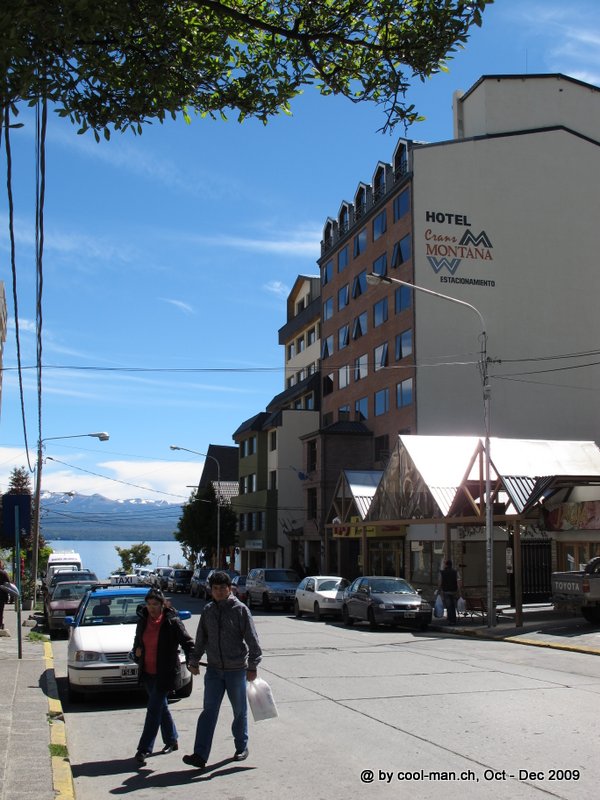 The view from Mount Cerro Otto. 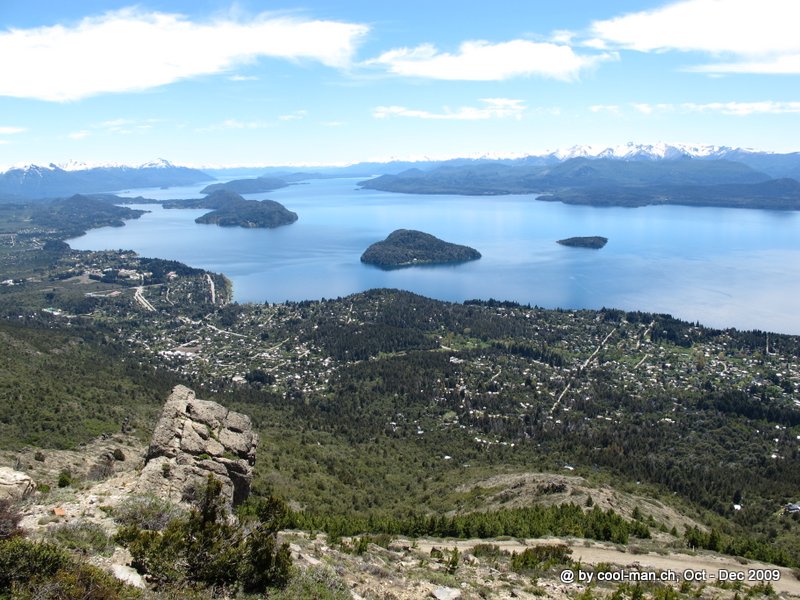 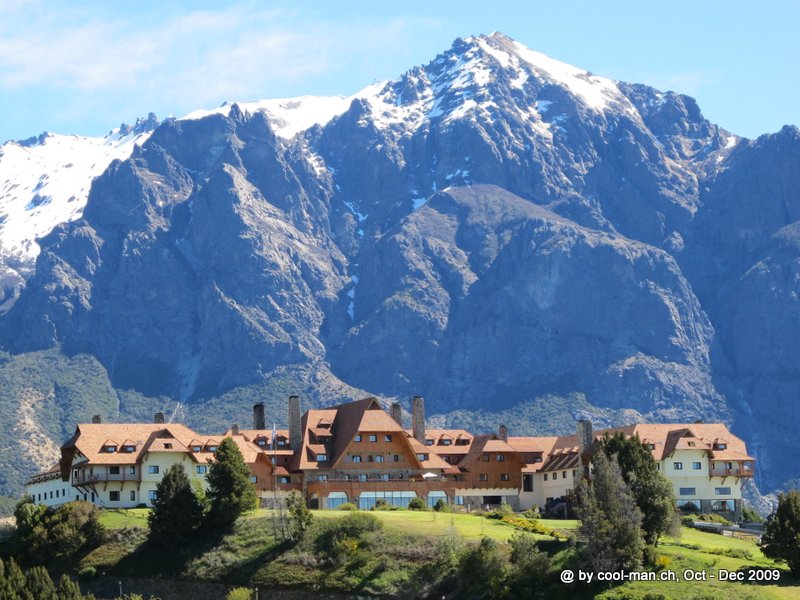 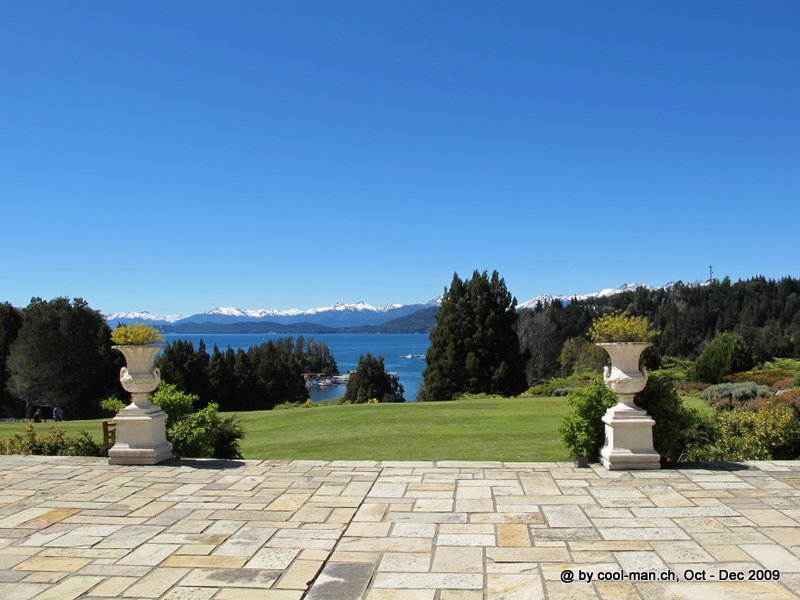 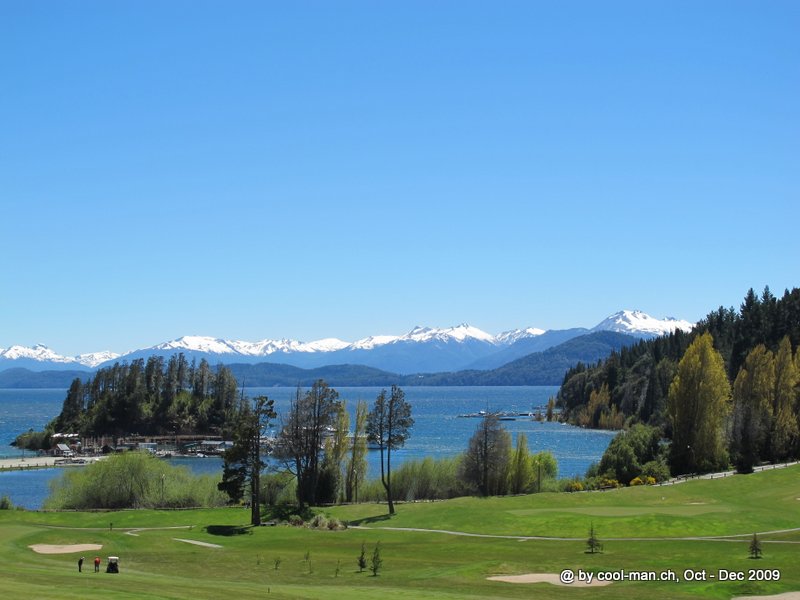 This car can still drive in Argentina. 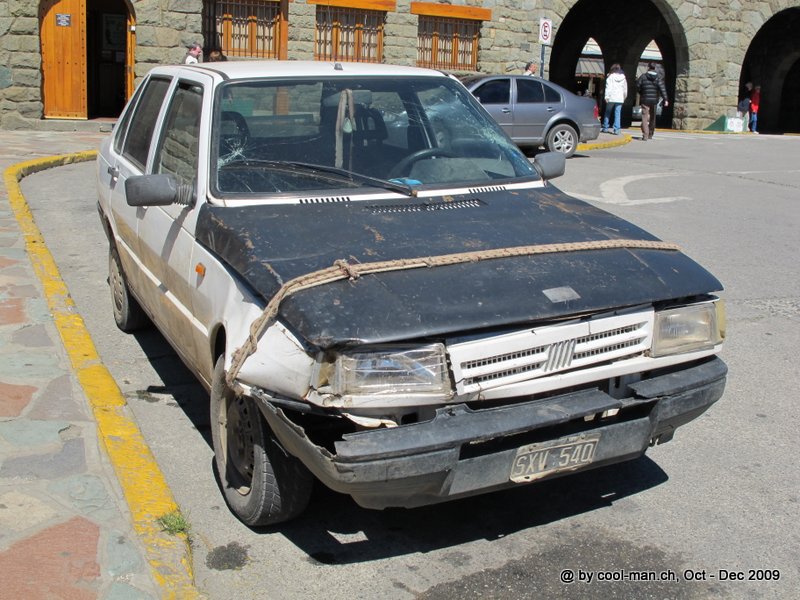 My next destination was Puerto Madryn on the coast of Argentina, the starting point for the Peninsula Valdès nature reserve. Whales give birth to their babies in the protected bays. Penguins and sea lions also like the area, as do the orcas (killer whales), which find a rich food supply here thanks to whale babies, penguins and sea lions. It is an impressive experience to see these animals, especially at sunset. 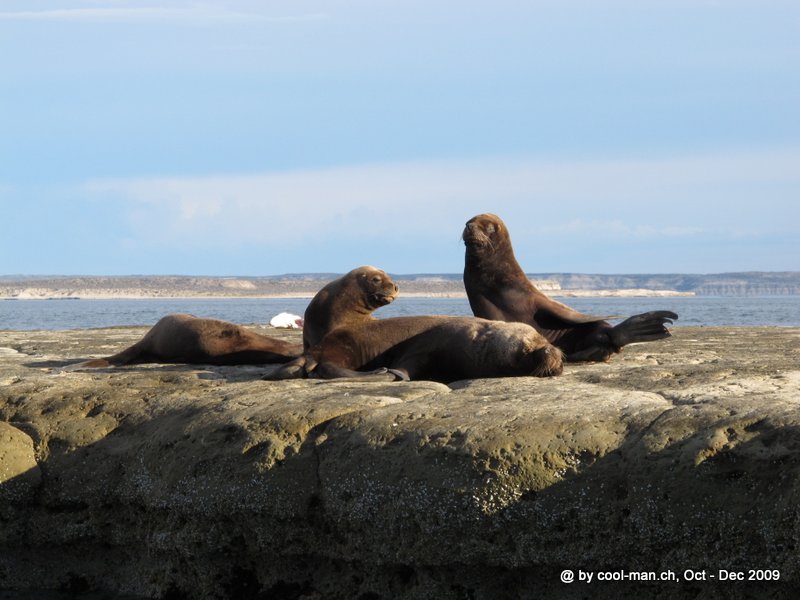 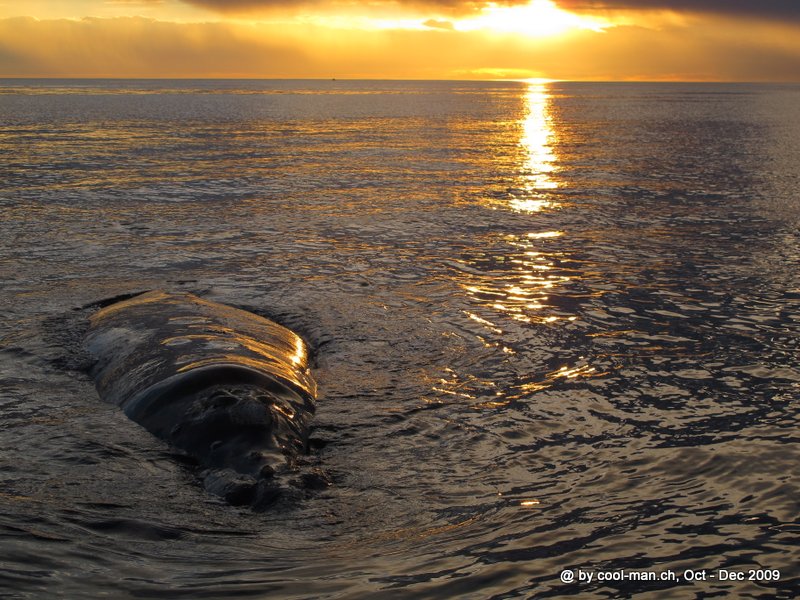 The 1’400 km long journey with the Ejecutivo Bus (Business Class on wheels) to Buenos Aires led through flat land. Only bushes can be seen for hours. In this area it hardly rains, because the west wind hardly contains any humidity after the way over the rainy Andes . Only towards Buenos Aires does the pampas appear, endless grasslands that make Argentina a top meat producer.

In Buenos Aires it is now summer with 26 degrees. I have rented a chic apartment with swimming pool and gym and will explore the city in the next 10 days. Also my two colleagues are still in Buenos Aires.

Buenos Aires is a city with a great past, since Argentina was one of the richest countries in the world at the beginning of the 20th century. But also today’s city offers a lot. There are whole quarters with relatively little traffic, but all the more restaurants, cafes and chic shops. Sometimes shops are turned into restaurants in the evenings in order to get the most out of the place. The harbor area was upgraded into a trendy quarter with many good restaurants, bars and discos. The people of Buenos Aires, called Porteños, love to go out and so there is a restaurant or a bar at almost every corner.

But the nightlife was not my thing, as the discos are only populated from 2 o’clock in the morning. Accordingly, one does not get to bed before dawn.

Buenos Aires is the city of tango, a dance with a lot of physicality. That’s why it has already been described as a relationship for three minutes. Tango is both a dance and a musical genre that originated in the 40s and 50s of the 19th century. The music has African, Spanish and German influences. But it was only in the estuary of the Rio de la Plata around Buenos Aires and Montevideo that the melancholic tango developed, reflecting the difficult situation of many immigrants at that time. Dance originated in the brothels of the poor suburbs, which is why both dance and music were avoided by the middle and upper classes. It was not until the beginning of the 20th century, when tango conquered the fashionable model of Paris, that it became socially acceptable around the Rio de la Plata. 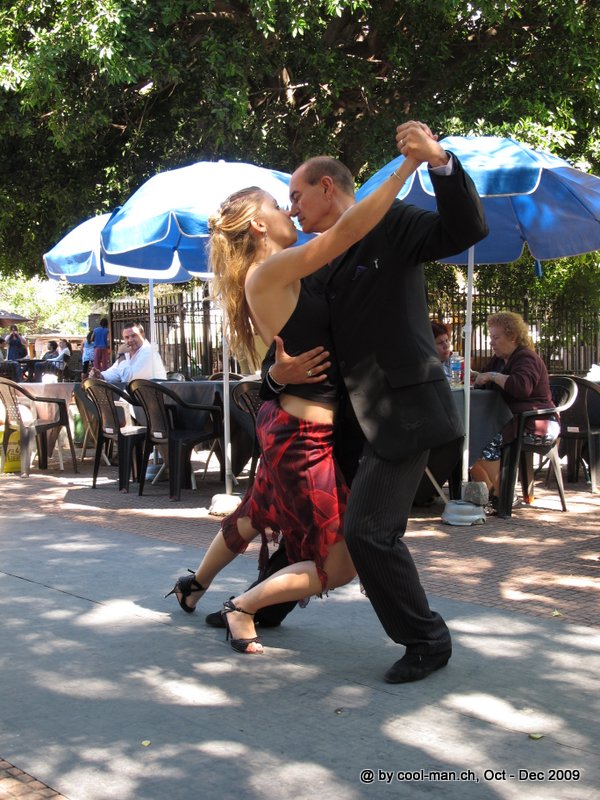 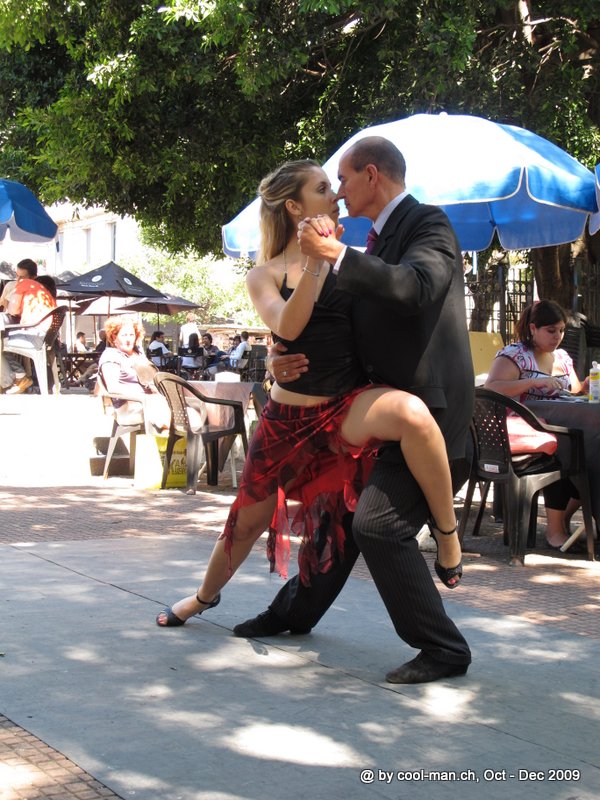 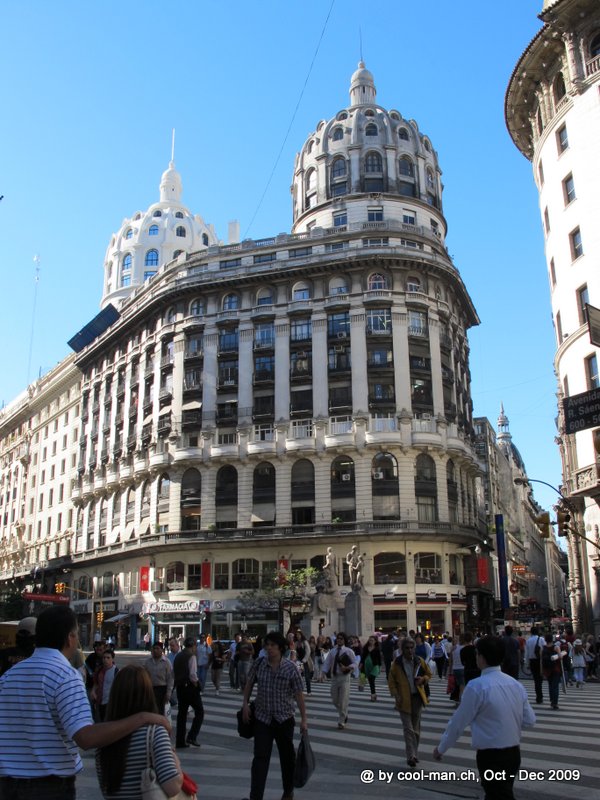 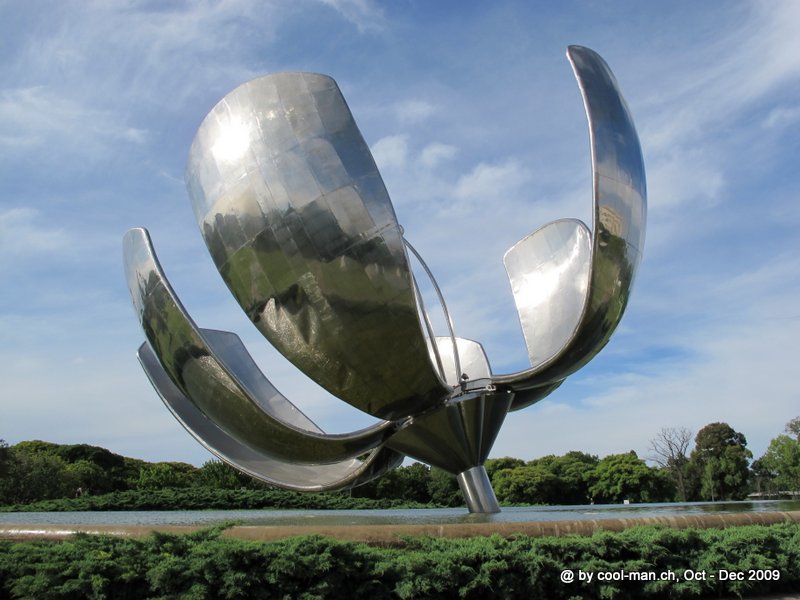 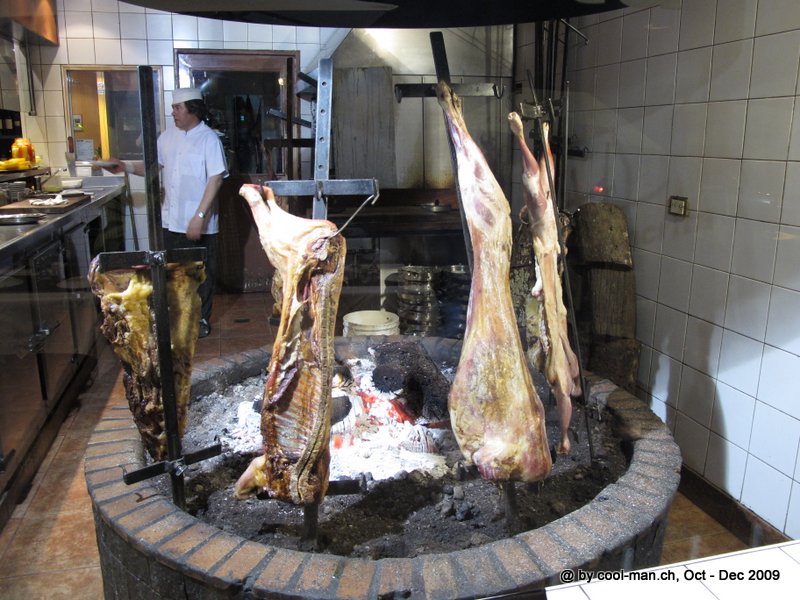 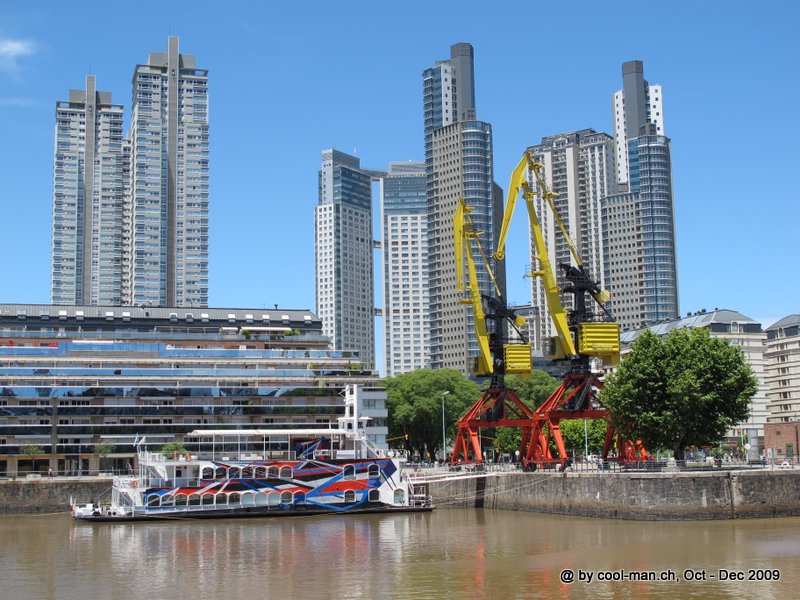 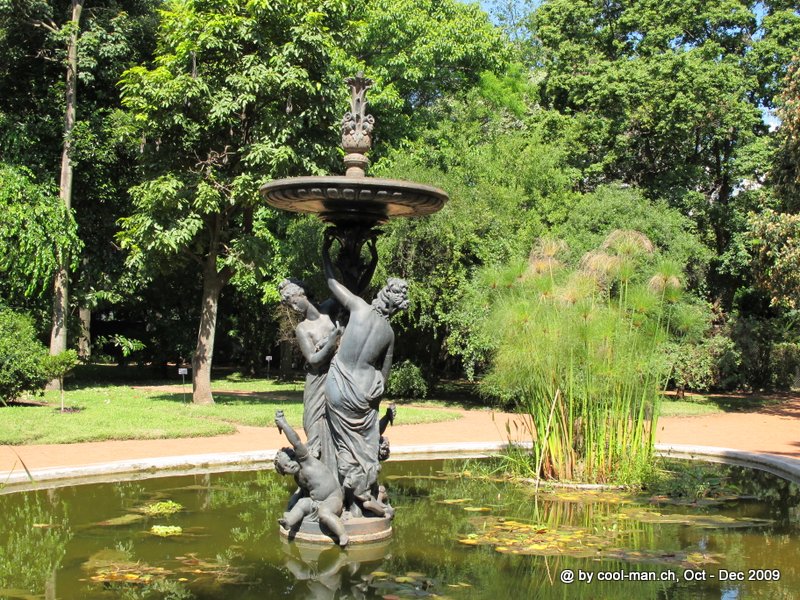 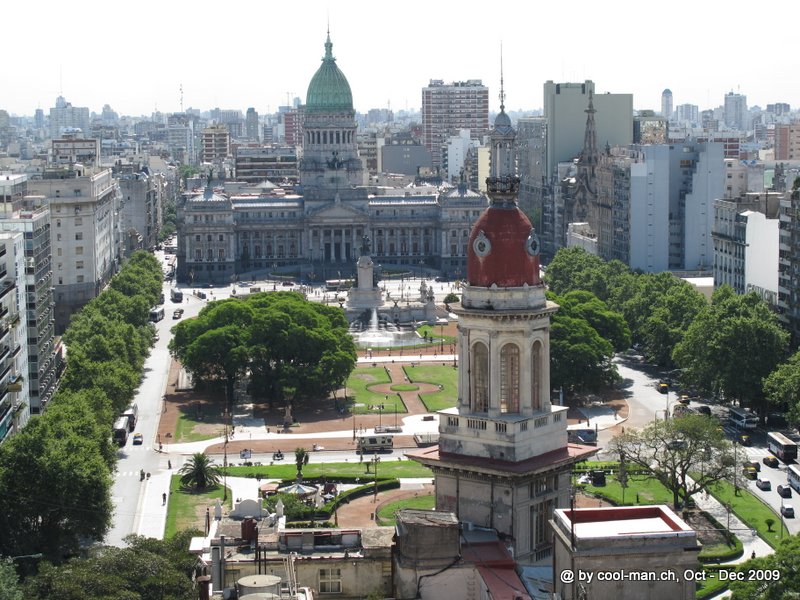 It is quite normal in Buenos Aires to go to a psychologist / psychoanalyst. You don’t make a secret of it. On the contrary, it is a popular topic of conversation. There are 795 psychologists per 100 000 inhabitants. In no other country is this number higher. The Porteños use psychotherapy not only when they have psychological difficulties, but also to cope with everyday problems, to develop their personality and to improve their quality of life. Psychologist Gabriel Rolón is a radio and television star and his book “Stories of the Divan” is a bestseller. At every kiosk you can find magazines that deal with psychological topics.

When you travel to Argentina and Chile, you will notice the more beautiful houses and more expensive shops in Argentina. Argentina clearly seems to be richer than Chile. But this is not confirmed by the statistics. While Argentina has a per capita gross national product of $ 6,040, Chile’s gross national product is $ 8,160. Argentina no longer serviced its national debt in 2002 and subsequently reached an agreement with private foreign creditors that reduced its debt by $ 75 billion. There’s a lot you can build with that. But maybe I only moved in the richer areas of Argentina.

Next I travel to Colombia, where I meet another colleague.