Coming from chaste Iran, the first thing I noticed in hot Beirut were the women in skimpy clothes. Having already drunk two glasses of wine on the plane after the long abstinence from alcohol in Iran, I tried the local “Almaza” beer on the roof terrace of my hotel that first evening. It is an excellent beer and much more aromatic than the “Beirut” beer.

Lebanon has a dangerous reputation in the West. Perhaps because the civil war is still remembered, but perhaps also because Lebanon shares most of its border with Syria. The civil war lasted from 1975-1991, so it has been over for 27 years. I have seen horrible pictures of the shattered capital, but today the visitor notices nothing more of it. The houses were renovated and new modern buildings were built. Apart from a few refugee camps that I saw from the bus and a few working Syrians, I didn’t notice anything about the war in the neighboring country. The travel advice from the Swiss Federal Department of Foreign Affairs FDFA recommends avoiding quarters in southern Beirut. It is also discouraged from visiting specific cities and the border area with Syria, although the dangerous incidents occurred more than three years ago. I informed myself locally with the residents and gave less weight to the over-cautious information provided by the FDFA.

Beirut is a heavily populated city with many narrow streets and a large volume of traffic, which makes moving time-consuming. It’s not a pretty town. Traffic’s loud and smelly. Pedestrians are the most vulnerable traffic participants, so special care must be taken when crossing the road, including on the pedestrian crossing. There is a network of bus routes in Beirut, which is operated by various private bus companies. However, there is no official route plan and no timetable. Since I was often on foot and only had to cover a few longer distances, I used taxis, some of which were shared with other passengers.

There are quieter places in the city such as the American University campus or the Zaitunay Bay, where Beirut marina is located and many good restaurants can be found.

The marina at Zaitunay Bay

The Sunni Mohammed Al-Amin Mosque was opened in 2008 and is now the most beautiful mosque in Beirut. 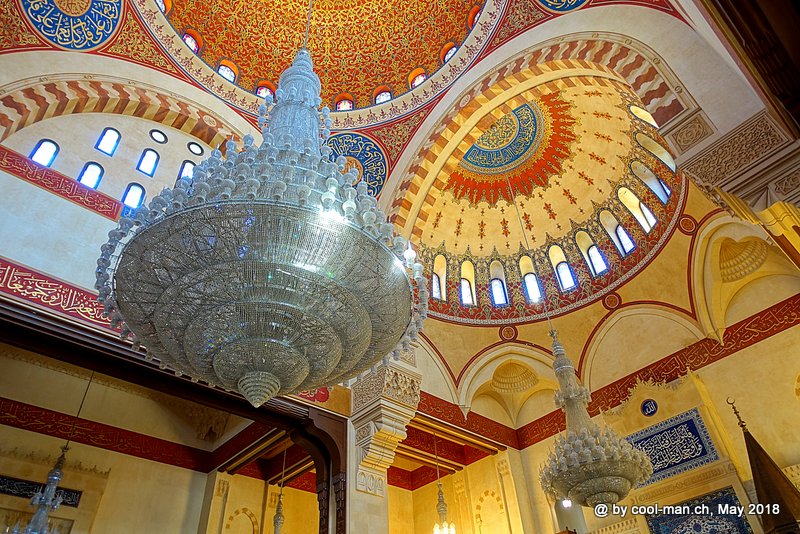 Another attraction is the National Museum, which displays archaeological exhibits from the various excavation sites in the country, providing a good overview of the country’s history and different cultures. The museum was on the front line during the civil war. The large works had to be protected by thick concrete containers and thus survived the war undamaged. The part shown in the picture was only reopened in 2016. 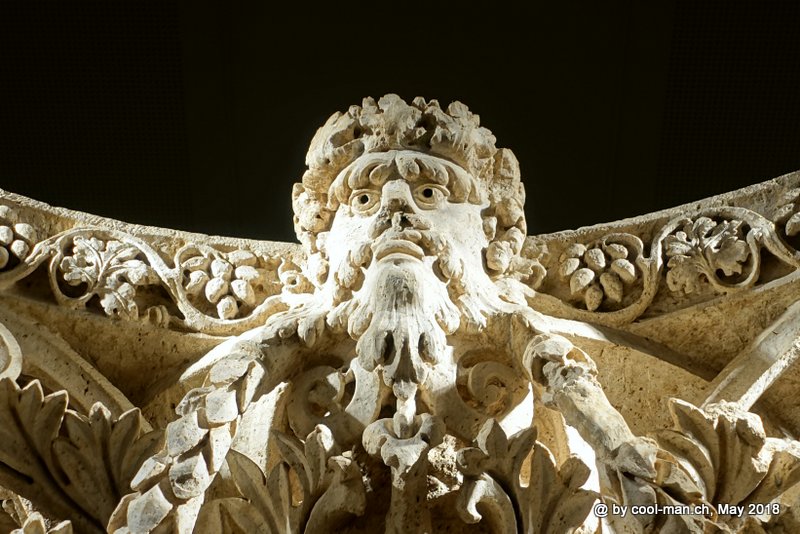 Sarcophagi from the 5th century B.C. 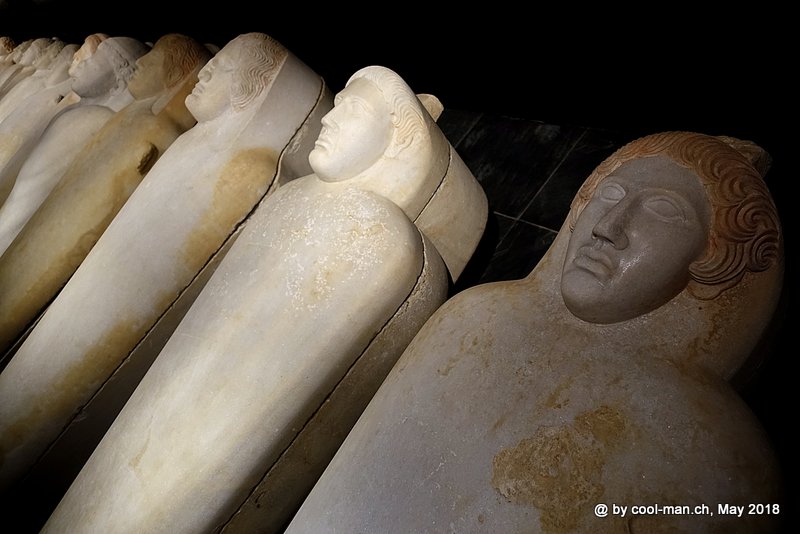 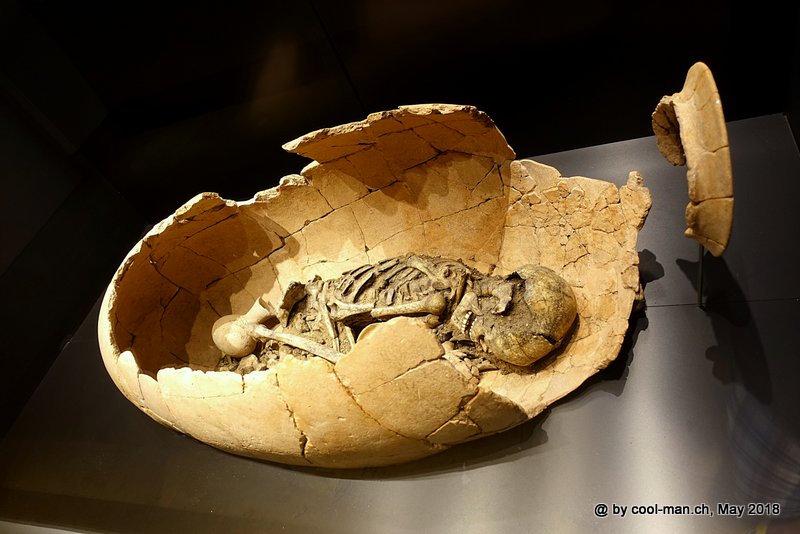 The highlight of my visit to Beirut was the MIM Mineral Museum, which houses the collection of Lebanese Salim Edde, which he developed over 17 years. It is one of the world’s most important private mineral collections. I was deeply impressed by the variety and beauty of the minerals, which are presented with the latest exhibition technology. Over 2,000 minerals from 70 countries are on display. Films also show the origin of minerals and their classification according to their properties.

The three minerals shown below are only a tiny part of the collection on display. 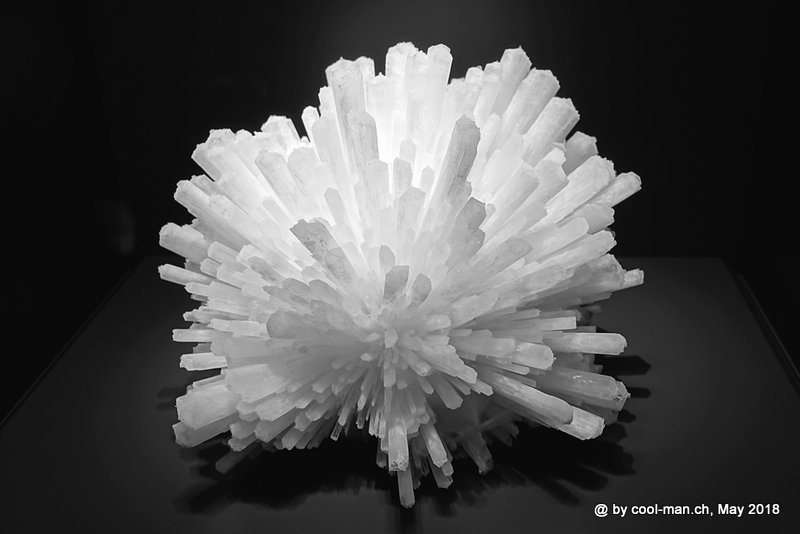 An aquamarine from Pakistan 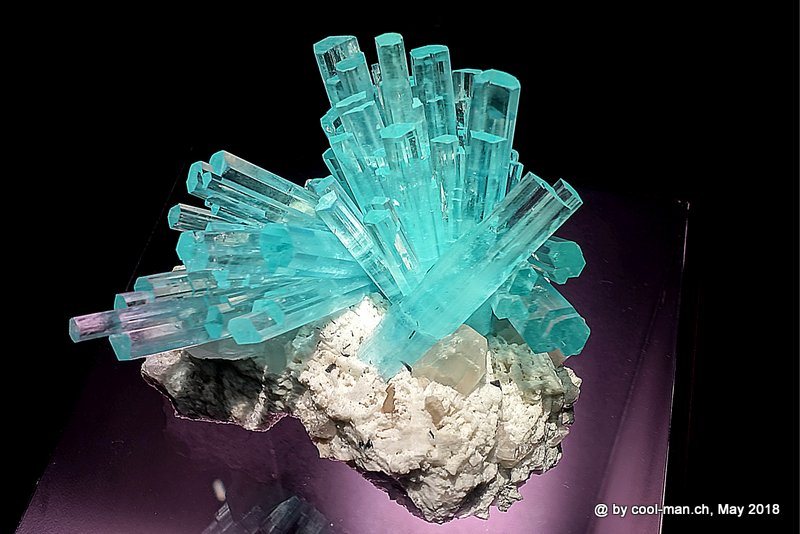 After a few days in Beirut I took a bus 40 km along the Mediterranean coast to Byblos, also called Jbeil by the locals. The coast was covered with houses all the way up the slopes and there was heavy traffic on the motorway. On this trip I got to know the mentality of the Lebanese bus drivers for the first time, because almost all of them try to charge more than the usual fare at the end of the trip. I soon realized that it was important to discuss the fare with the driver before the trip and, in case of conflict, to include the other bus passengers who had always stood up for me against the greedy driver.

Byblos is one of the oldest permanently populated places on earth. The city flourished in Phoenician and Roman times and during the Crusades in the Middle Ages.

Next to the new city along the motorway, there is a quarter by the sea with little traffic, which turns into a nightlife district at night. From my hotel room I had this view of the Mediterranean Sea and one of the beaches at Byblos. From the hotel a staircase led in few minutes to the beach, where I went swimming already before breakfast. It was a pebble beach and not quite clean. Still, I enjoyed bathing in the sea. 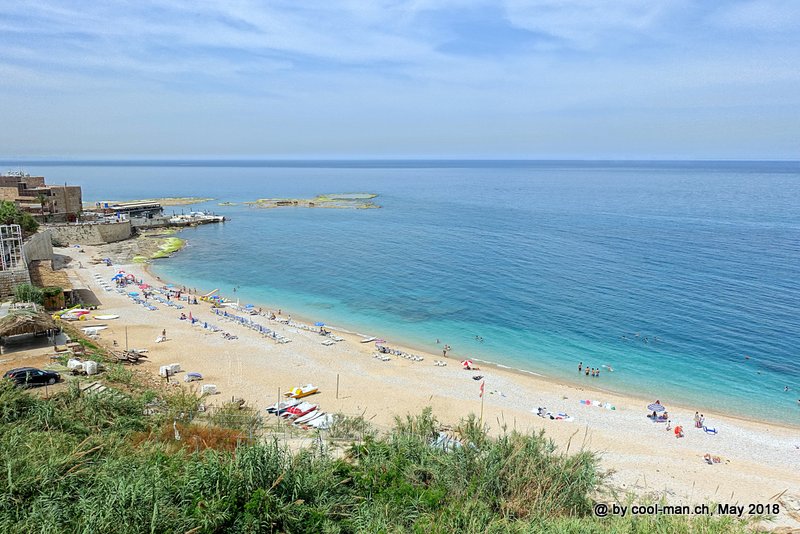 The picturesque port of Byblos

The Cathedral of St. John the Baptist, built by crusaders in 1115 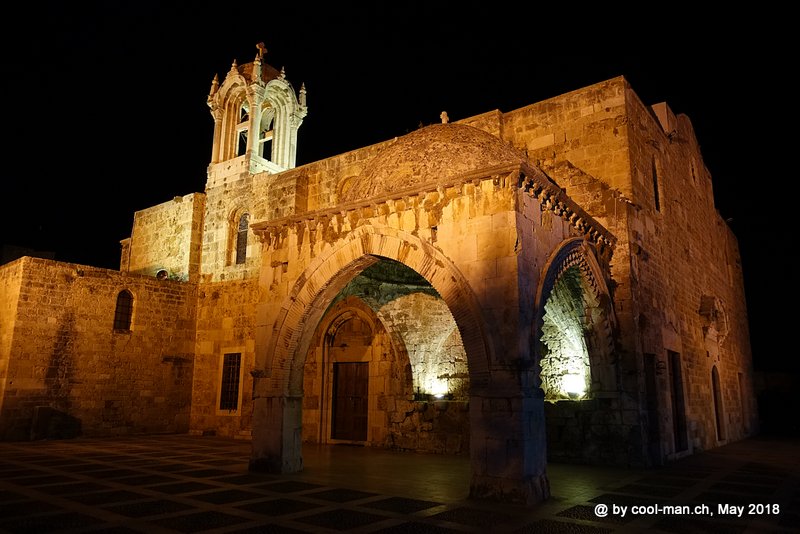 From Byblos I visited the Chateau Musar winery founded in 1930. The guide of the tour explained all aspects of wine production and the handling of wine for two hours. But the wines I tasted did not convince me.

The mountain village Bcharre (also written Bsharri) was my next destination. It is located at 1’450 m.a.s.l. 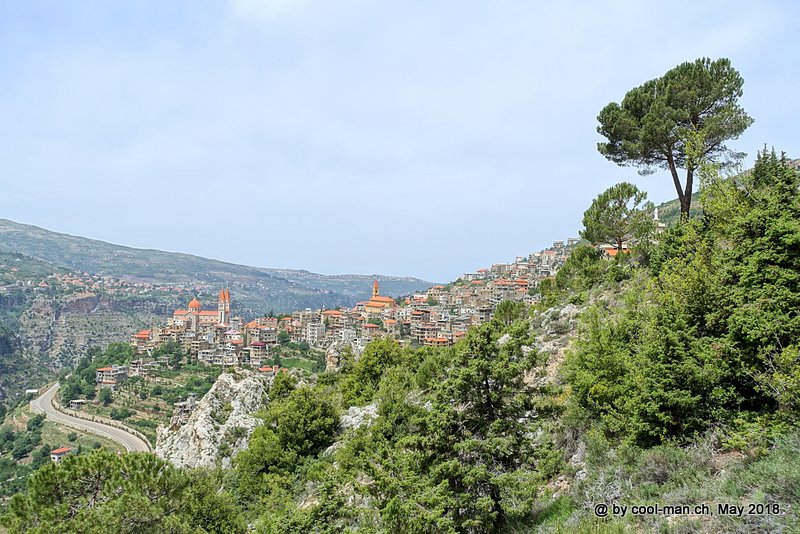 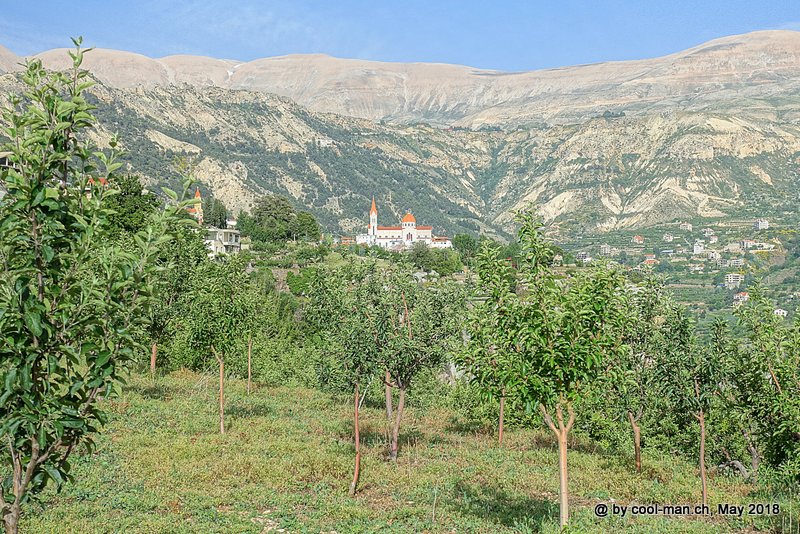 Above the village lies the last forest of the Lebanese cedar, once found throughout the eastern Mediterranean. Since Phoenician times it has been appreciated and used because of its longevity and resistance to insect infestation.

The nearby Kadisha Valley is home to some of the oldest Christian monastic communities in the Middle East. Since the beginning of Christianity it has been a retreat for the persecuted and hermits. I went on a day hike to these secluded monasteries.

The end of the Kadisha Valley 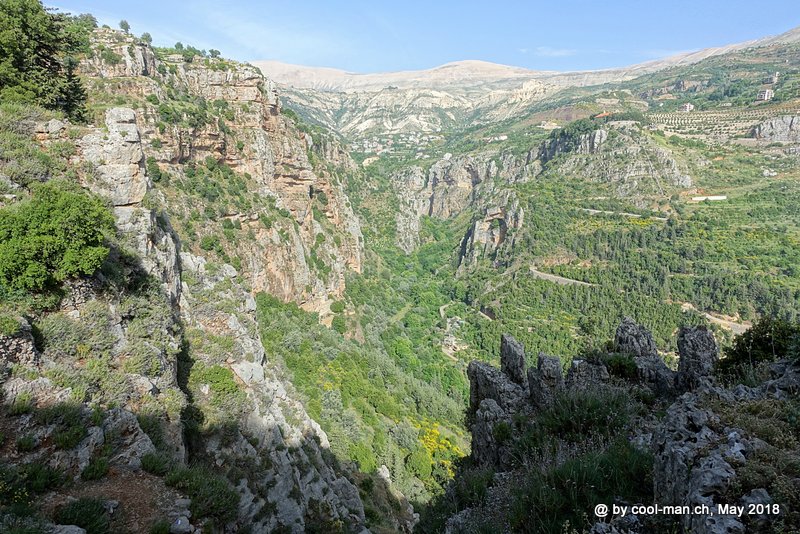 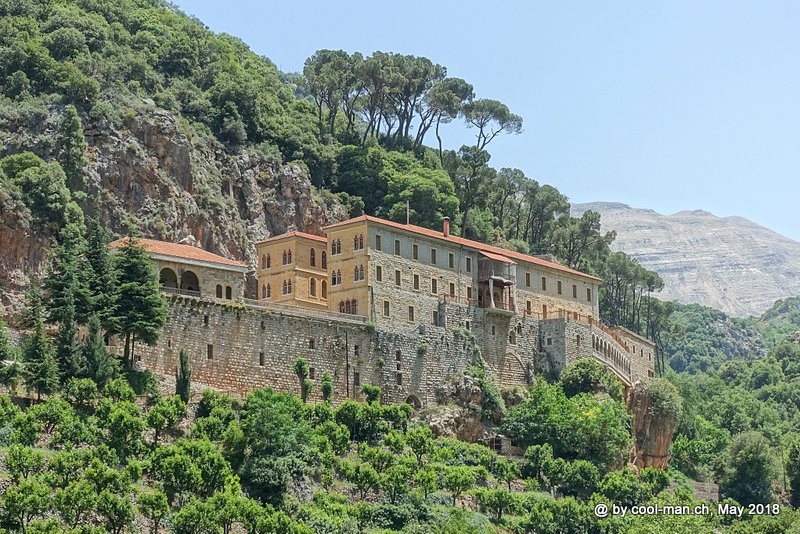 The Grotto of the Antonios Koshaya Monastery

The Qannoubine Monastery was built 1’500 years ago and is the oldest monastery of the Maronite Order in the valley. 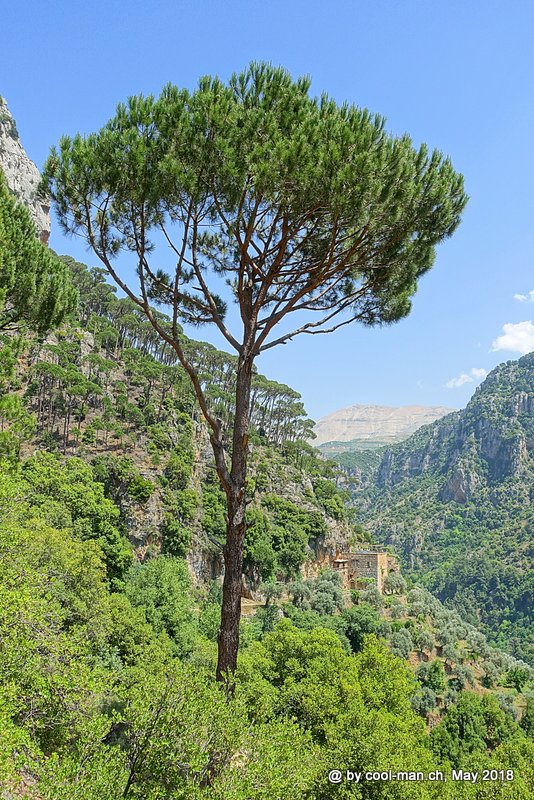 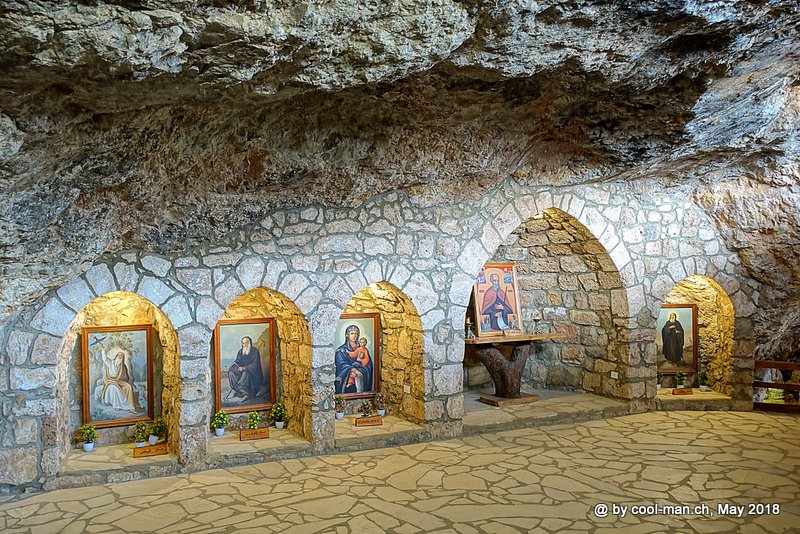 Since there was no bus connection from Bcharre over a pass to Baalbek, I continued by taxi to Baalbek, a small Muslim town 60 km away. It is a stronghold of Hizbolla and lies in the fertile Bekka Valley. The temple complex on the outskirts of the city was one of the most famous sanctuaries in the Roman world and a UNESCO World Heritage Site. Since at least the end of the third millennium B.C. the place has been used to worship various deities. The Greeks called the place Heliopolis or City of the Sun.

The Romans started the construction of their temple complex in 60 B.C. and built it for over 200 years. More than 100,000 slaves were deployed for the project. Later the first Christians, then Muslims and Crusaders used the site for their purposes. In 1898 the German Emperor Wilhelm II visited the ruins on his way to Jerusalem. He was impressed by the splendor of the Roman remains, but they were in a bad condition. Earthquakes, weather impacts and looting by the local population for the procurement of building materials represented a great danger. The German Emperor wanted to prevent this. Only two months later, German archaeologists began the first excavations and took steps to protect the site.

Baalbek: The temple of the wine god Bacchus 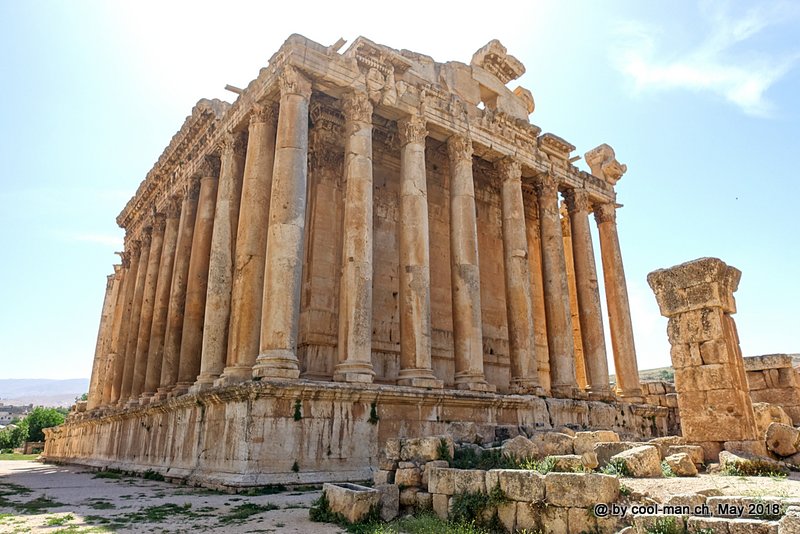 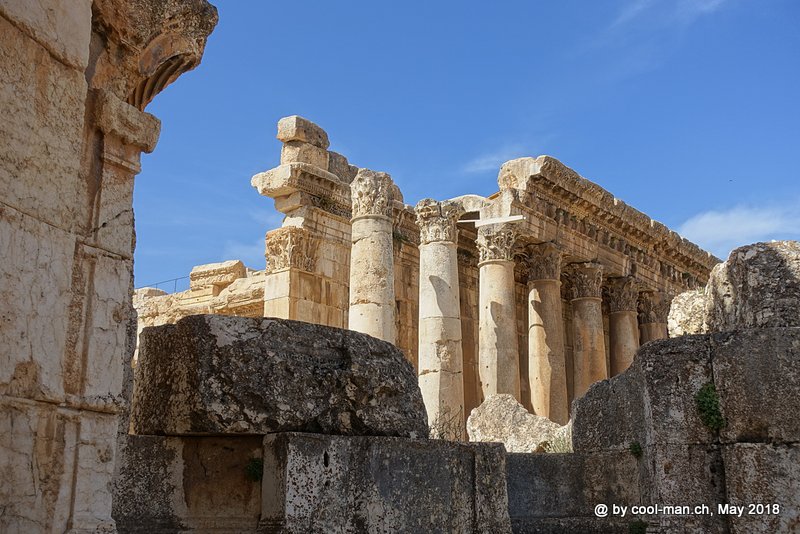 The six preserved columns of the Jupiter Temple are 75 feets high and were the highest columns in the Roman Empire. During my visit they were covered by scaffolding, so that I cannot show a photo here.

Wine region around the town of Zahle

I continued in the Beeka valley to the wine region around the town of Zahle. The history of wine production in Lebanon dates back to the Phoenicians, who sold their wine throughout the Mediterranean in ancient times. After the civil war there were only 5 wineries left. Currently there are about 40, which together produce 8 million bottles of wine per year. For comparison: Switzerland produces around 144 million bottles of wine a year.

In general, the quality level of Lebanese wines is high. Most bottles cost CHF/USD 20 and more and are therefore rather expensive.

The largest and oldest winery is Chateau Ksara, which is responsible for 70% of Lebanese wine production. It was founded in 1857 by the Jesuit order. 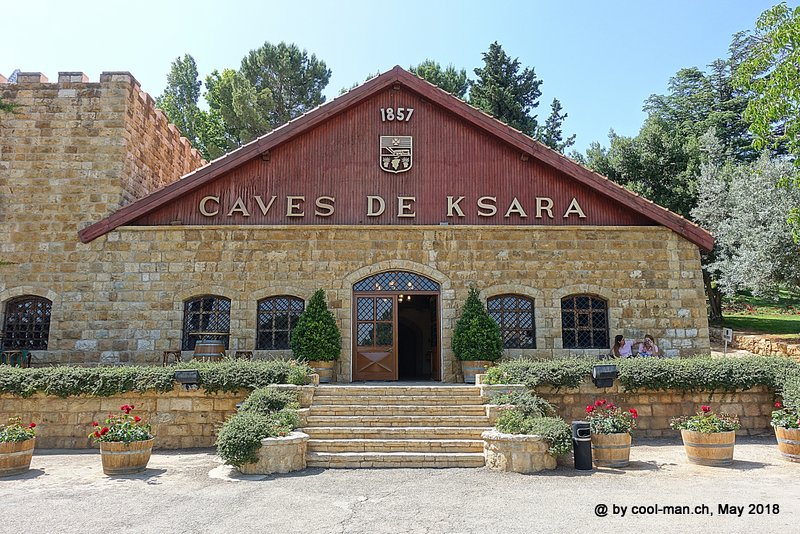 In 1898, a two-kilometre-long cave system was discovered on the estate, in which wine is stored and aged under constant temperature and humidity.

The winery under the direction of the monks was successful. Since the Vatican was critical of the commercial activities of the monasteries, the estate was sold to private individuals in 1973.

In the Chateau de Liban I had the opportunity to taste wine directly from a barrel. 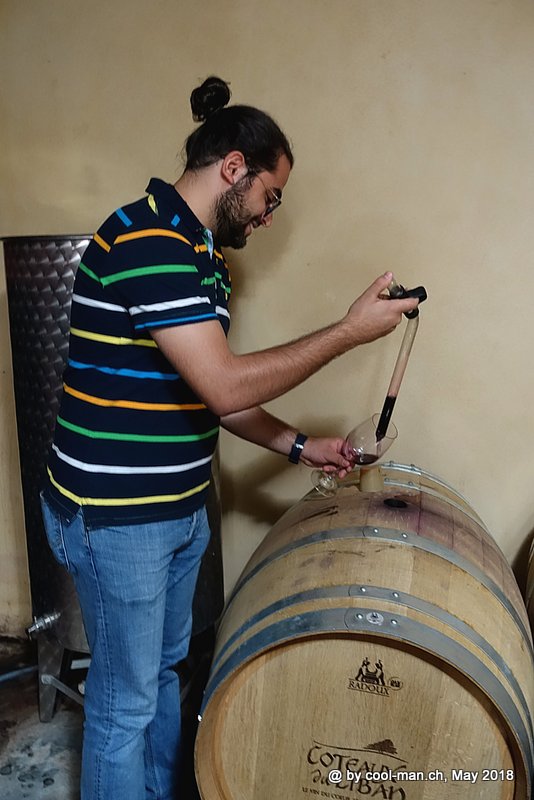 The wines of the Domaine des Tourelles also convinced me. All Lebanese wineries produce the Lebanese national drink, the Arak, in addition to the wines. It is a distillate of grape alcohol and anise. The best Arak is then matured in clay amphorae, where water can evaporate, creating the purest form of arak.

The photo shows the maturation of the Arak in clay amphorae at Domaine des Tourelles. 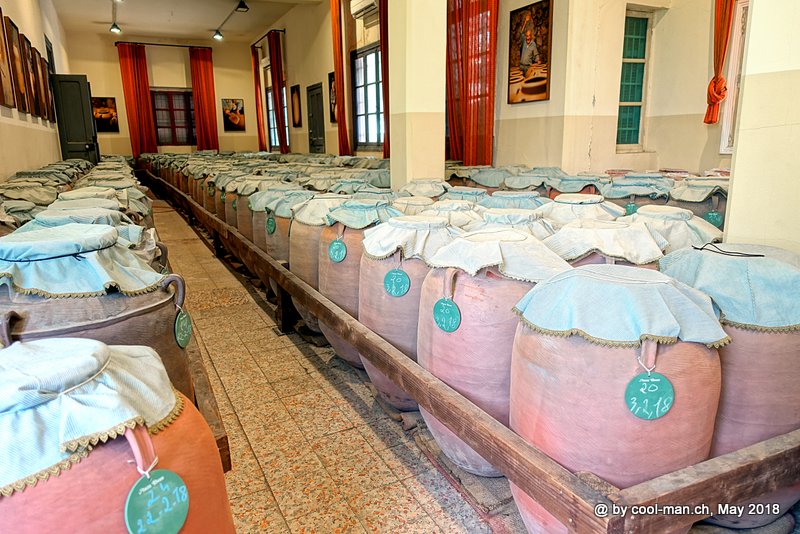 My journey continued in the Beeka valley to Anjar, which today is inhabited mainly by Armenians who once fled. The historic city of Anjar was founded in the 8th century A.D. and is today a UNESCO World Heritage Site. 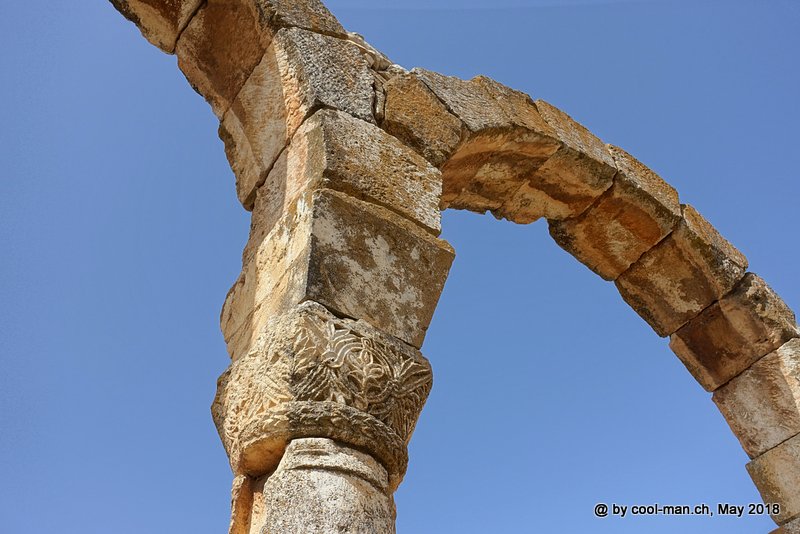 Wine and grapes already had a prominent place at this time. 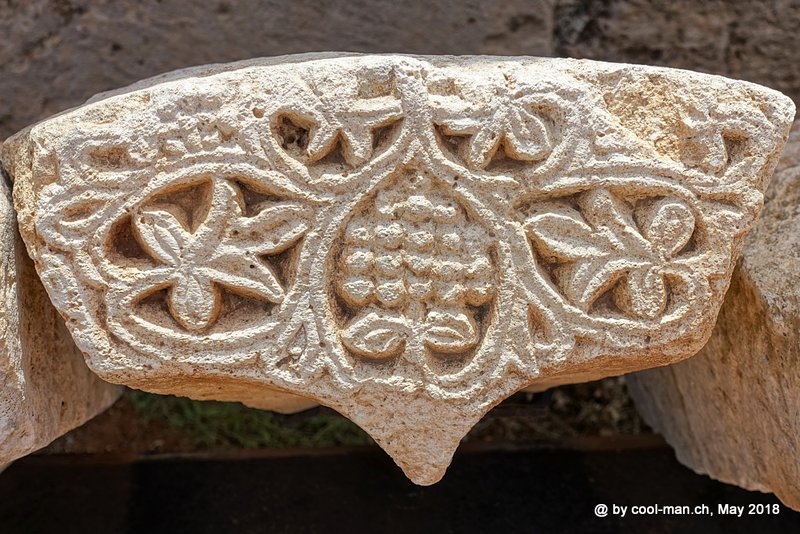 The border to Syria runs on a range of hills and is only 2 km straight line away from the city. Nevertheless, the city was safe, as the locals assured me. There was a castle on the ridge. Under other circumstances, I would have walked to the castle. But here I did not do it, because there was the risk of being kidnapped in this no-man’s-land.

This breakfast was served by the hotel in Anjar. 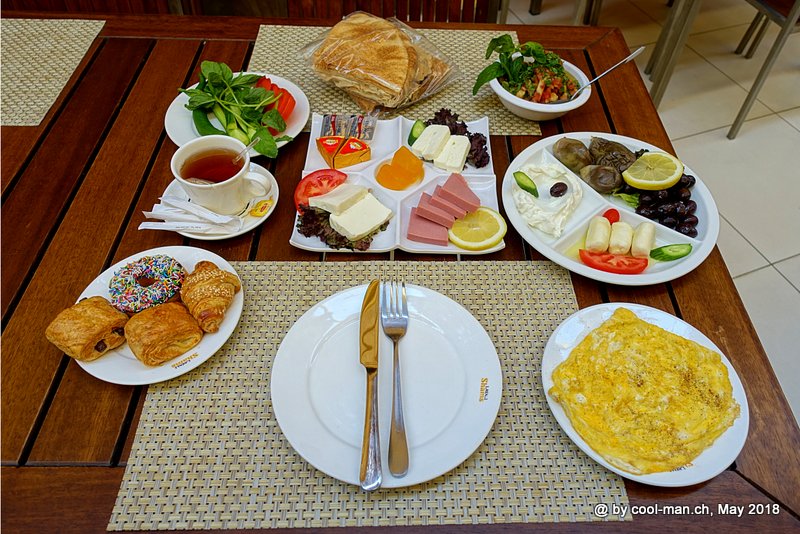 Via Beirut I continued by bus to the port city of Tyre (also called Sour or Sur). It is the southernmost major city in Lebanon, 25 km from the Israeli border.

The fishing port of Tyre

From my room in the old town I was able to watch this wedding. 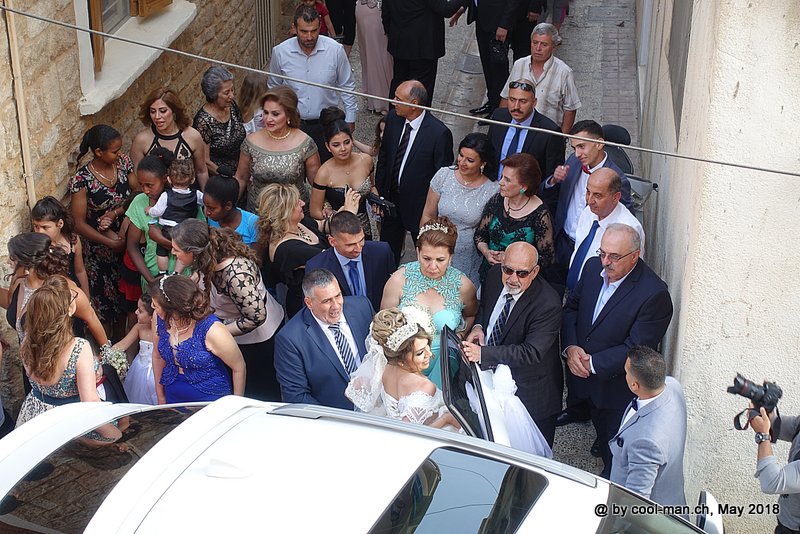 There are also ancient sites in this city that were inscribed on UNESCO’s World Heritage List. The picture shows the Hadrian triumphal arch in the Al-Bass quarter. Not far away is a Roman hippodrome where chariot races were held. 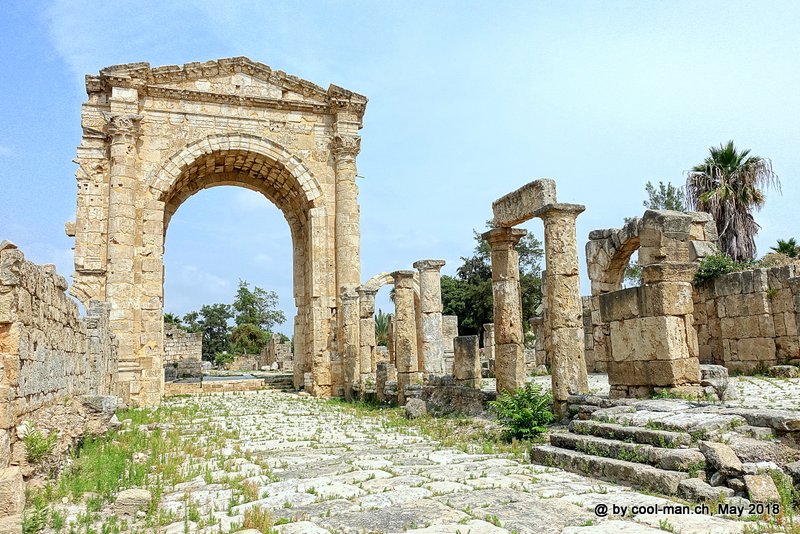 Al-Mina is another Roman ruin complex.

Tyre has the most beautiful beaches in Lebanon. 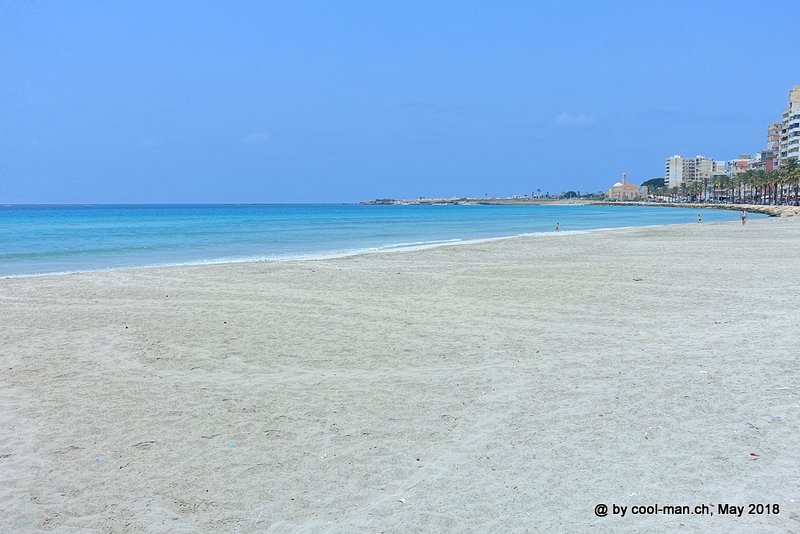 Enjoying the sunset with an Almaza beer and watching the fishermen… 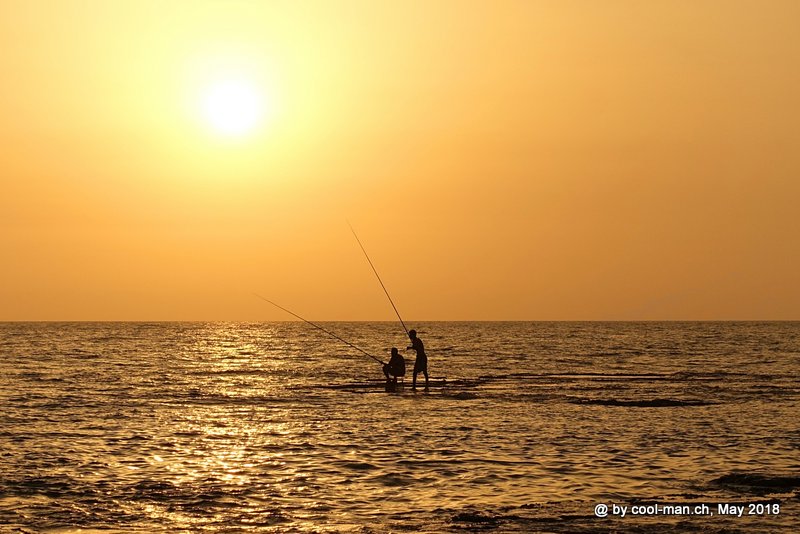 After a few days I traveled back to Beirut, where I stayed another night and a day until I returned to Switzerland.

Several travelers told me with excitement about the Jetta Grotto 23 km from Beirut. Therefore I organized a taxi to the cave on the last day of my trip, because there was no public transport to the grotto. I wasn’t disappointed. I have visited many caves, but this one was really impressive. After a short cable car ride and a walk through the access tunnel I entered the cave halls, which are up to 12 meters high and form the upper part of the cave. Countless stalactites and bizarre rock formations lined the over 600-metre-long well built path. One of these stalactites is 8.20 meters long and thus one of the largest in the world. Not a single stalactite has broken off and neither the walls nor the stalactites are scribbled. The well staged lighting in different colors further underlines the beauty of this place.

Back in the daylight, a short walk led to the lower part of the cave, where visitors can discover more cave chambers on a river with small electrically powered boats.

Taking pictures in the cave was forbidden. But the official website of the Jetta Grotto contains very nice pictures.

In the middle of the night I flew back to Switzerland.

Lebanon is worth a visit. The MIM Mineral Museum and the Jetta Grotto are unique worldwide and even justify a short visit to Beirut.