I have split my Mexico trip into two websites because of the many photos. This website describes the first part of my trip to Cancun, Tulum and Mexico City. You can find the link to the second part here and at the end of this website.

Mexico is the first destination on my winter journey 2019/2020. I am visiting this country for the first time, because the travel warnings of the Swiss government deterred me so far. Shootings between security forces and drug gangs would occur frequently. Various drug gangs and other criminal groups fight each other. Kidnappings with ransom demands and politically motivated kidnappings are on the increase throughout the country. The risk of violent crimes and assaults is also very high in many states. After a thorough analysis of the security situation and tips from other travelers, I decided to travel to the Yucatan peninsula and visit a Swiss colleague in Mexico City who has lived there for many years.

First of all, I have not experienced any dangerous situation in either Mexico City or Yucatan. I felt very safe all over the Yucatan Peninsula and could even walk alone at night without any problems.

With a direct flight I flew to Cancun, the biggest city on the Yucatan peninsula. Here I immediately bought a SIM card and withdrew cash from the ATM. The beaches and most of the hotels and bars are located in the “Hotel Zone”, a strip of land in the sea off the city. A large part of the beach is taken up by the huge hotels and was not freely accessible. There was a sterile, artificial atmosphere. In my opinion the typical Mexican atmosphere was lost here and was replaced by an exchangeable international hotel landscape, which attracts mainly package tourists from the USA and Canada.

My colleague in Mexico City was still on vacation, so that I couldn’t visit him for a week. Therefore I traveled to Tulum, which is 131 km north of Cancun on the coast.

I lived in the city of Tulum, which is only a few kilometers away from the beach and which had some good restaurants. One restaurant even had the poisonous Pacific Red Lionfish on the menu. I already met this fish in Indonesia on Raja Ampat and in the Wakatobi reef and in Tonga while snorkeling, but I didn’t know that you can eat this fish.

One restaurant had the poisonous Pacific Red Lionfish on the menu. 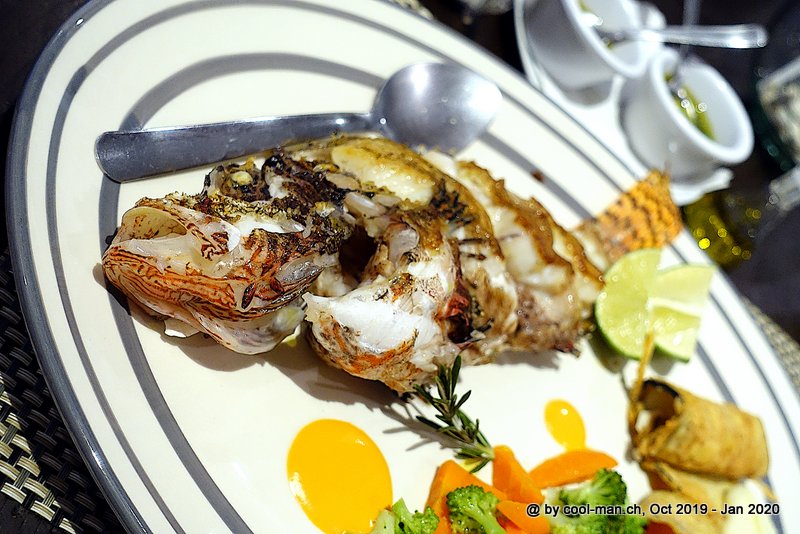 On November 1, Mexico celebrated extensively the Day of the Dead (Dia de los muertos). There is no mourning here. Rather, it is a festival where the dead return from the afterlife and celebrate with the living with music, dance and good food. All over the country, elaborate skeletons and skulls were exhibited together with food. 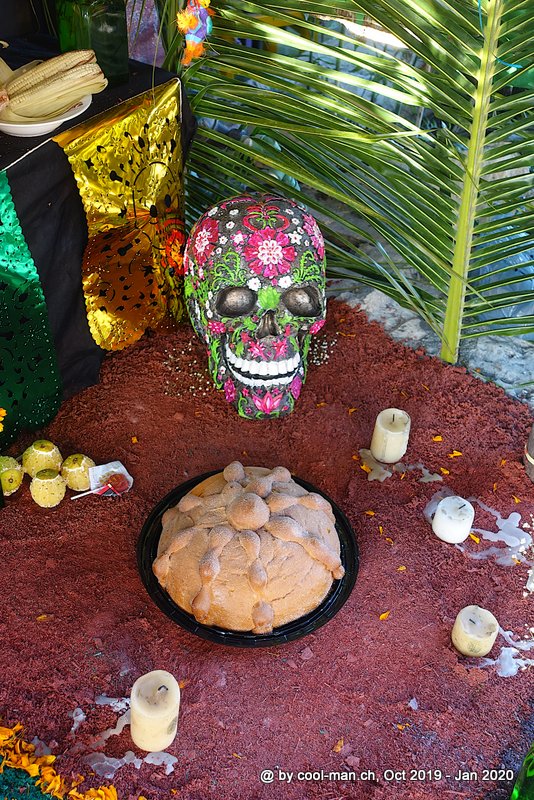 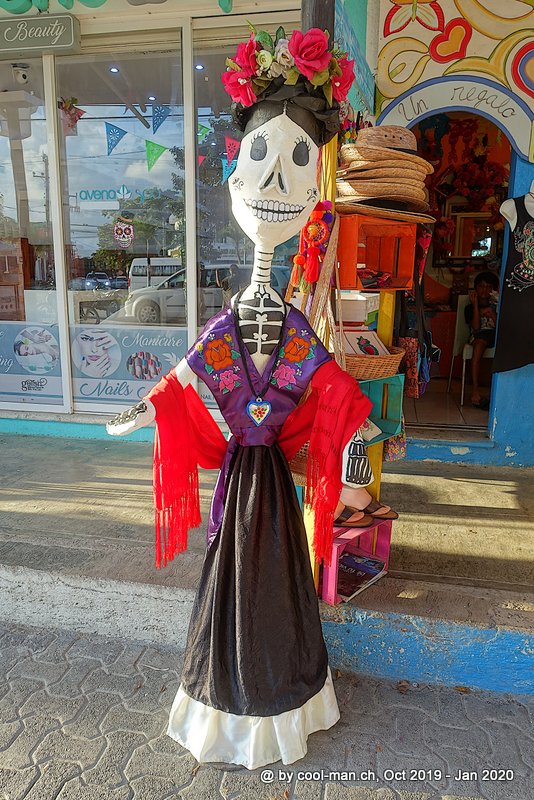 By bike I visited the Mayan site a few kilometers away, the first of countless archaeological zones on my journey through Mexico, Guatemala and Belize. This was unique, as it was the only one directly by the sea. Before the arrival of the Spanish, Tulum was an important Mayan port on the Caribbean Sea. 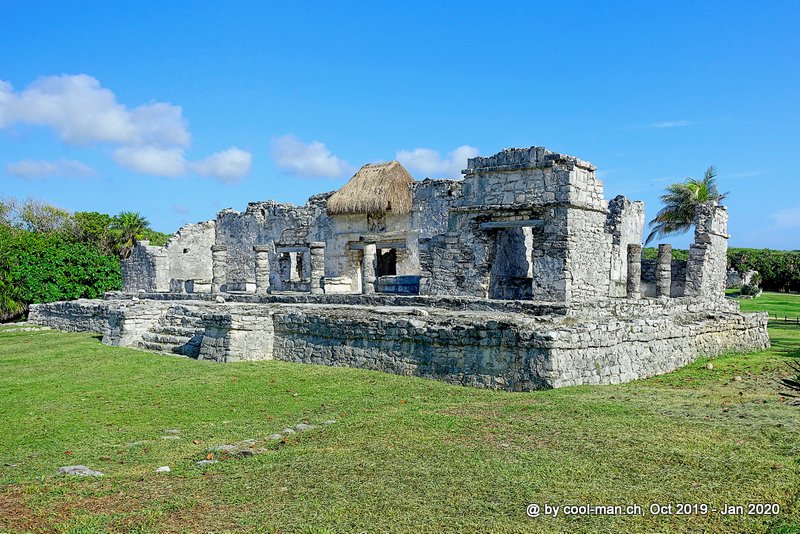 I met the Black Spiny-Tailed Iguana again and again on my trip to Mexico. 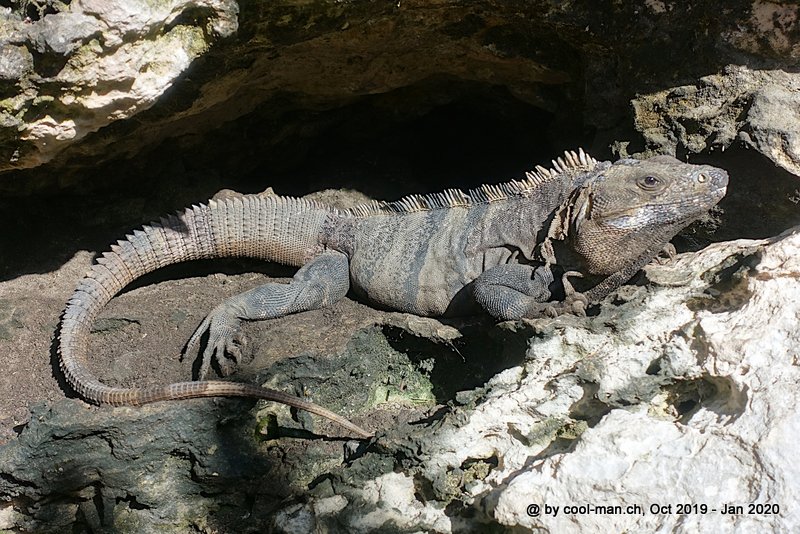 The hotel zone of Tulum with the beach is located next to the Maya site. On a snorkeling tour I met rays and turtles, which had lost their fear of humans because of the regular feeding. Actually I prefer to observe the animals in undisturbed free nature. 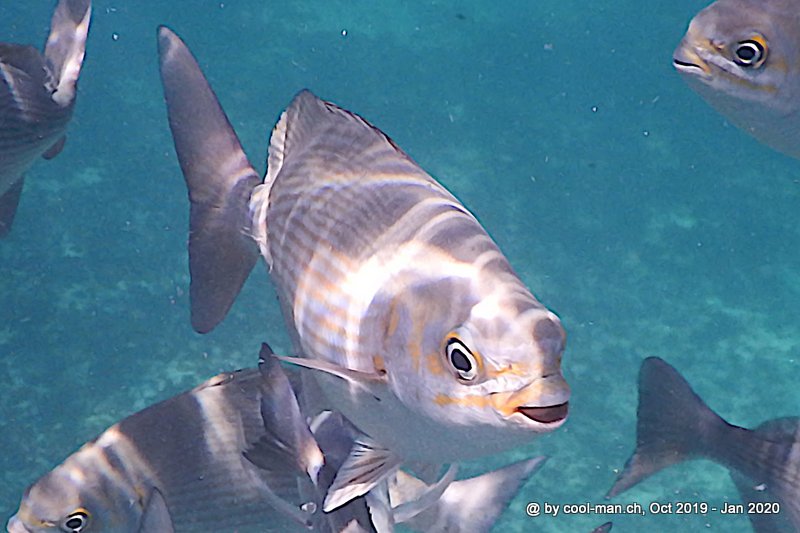 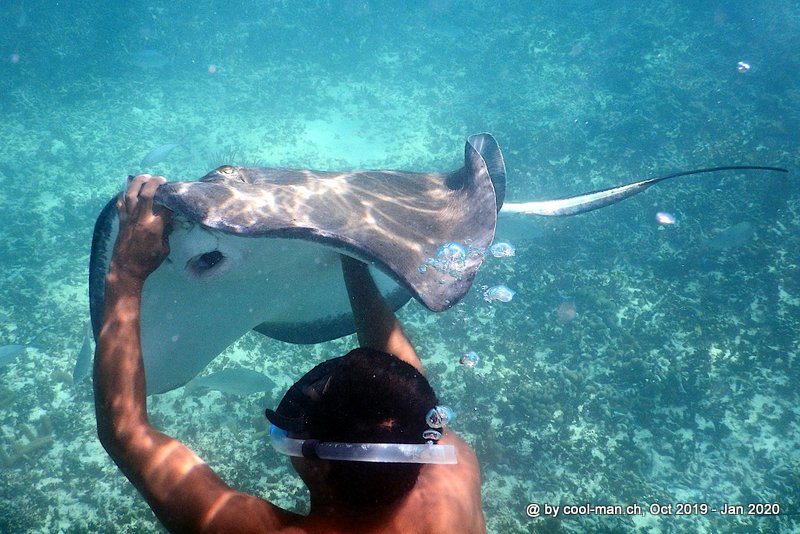 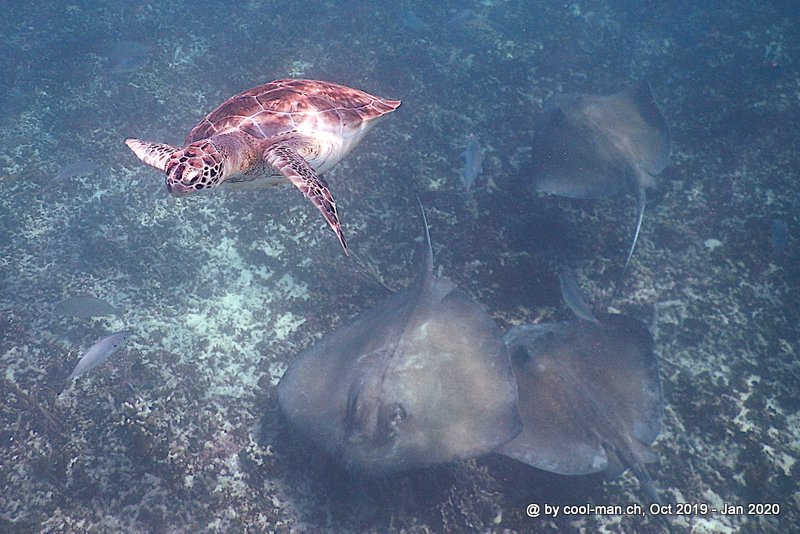 Around Tulum I visited the first water holes (Spanish cenotes), which can be found in hundreds on the Yucatan peninsula. Yucatan is a huge karst area, through which the rivers flow underground instead of above ground. The water is refreshingly cool and invites for a swim. Most cenotes are above ground, but many are caves where daylight does not penetrate at all or only through a small hole in the ceiling.

Every cenote is unique, so that visiting the many cenotes on my Mexico trip always offered surprises.

The Cenote Labnaha is rarely visited because of its high entrance fee of about USD 35. From the reception office on the road, one takes the bus of the operating company a few kilometers into the forest. From a gate it is a 15 minute walk to the entrance of a stalactite cave, where I met bats, spiders and some fish. 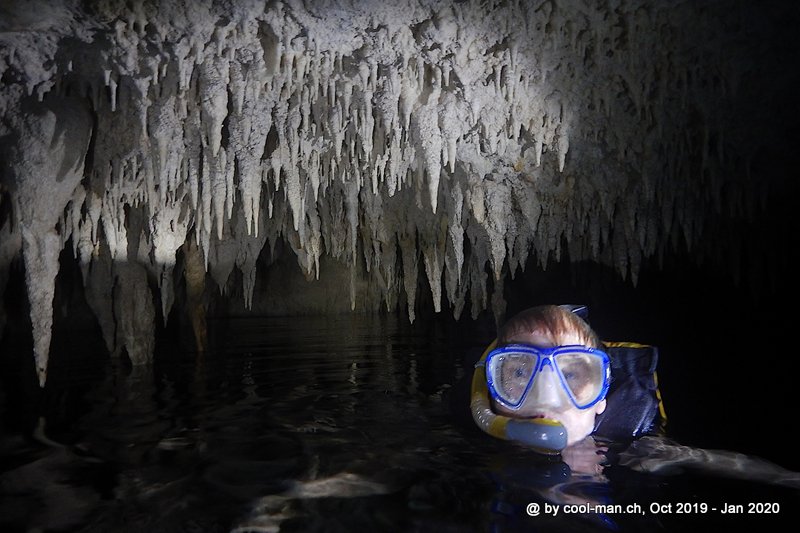 In the Casa Cenote I saw an alligator, which frightened me very much at first. But it was harmless, because when it was young it was found abandoned by its parents and raised by humans. With its many roots in the water and the abundance of fish, this cenote was very interesting.

In the Casa Cenote lives a harmless alligator 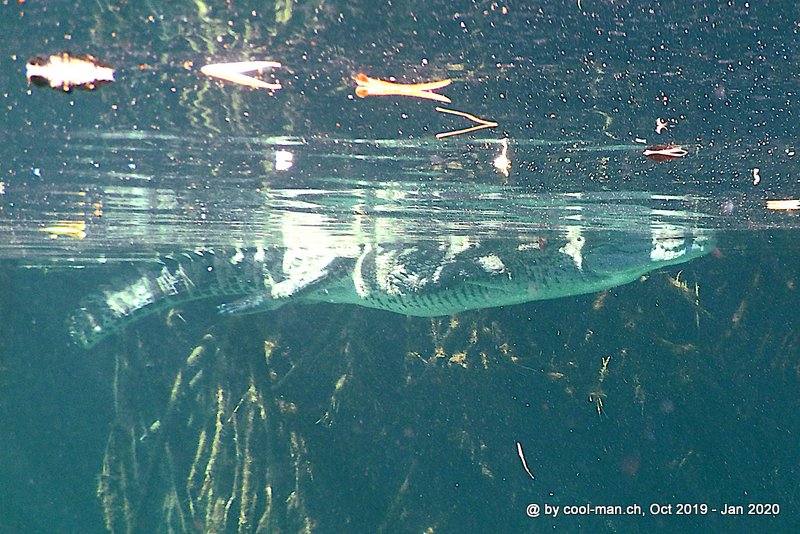 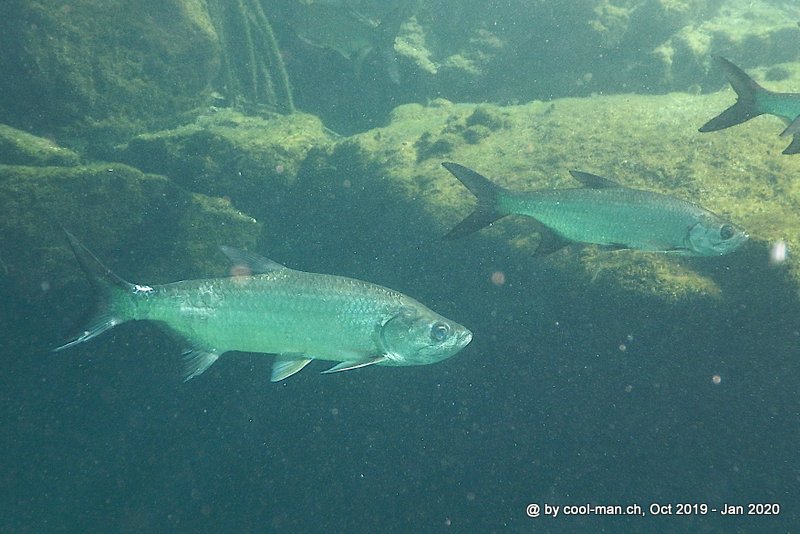 The name of the cenote Carwash is actually cenote Aktun Ha. It got its nickname because it is located right next to the road from Tulum to Coba and was formerly used as a car wash site. The sun’s rays offered a great spectacle of color and some fish sought shelter among the water plants. In this cenote divers can also explore further cave areas. 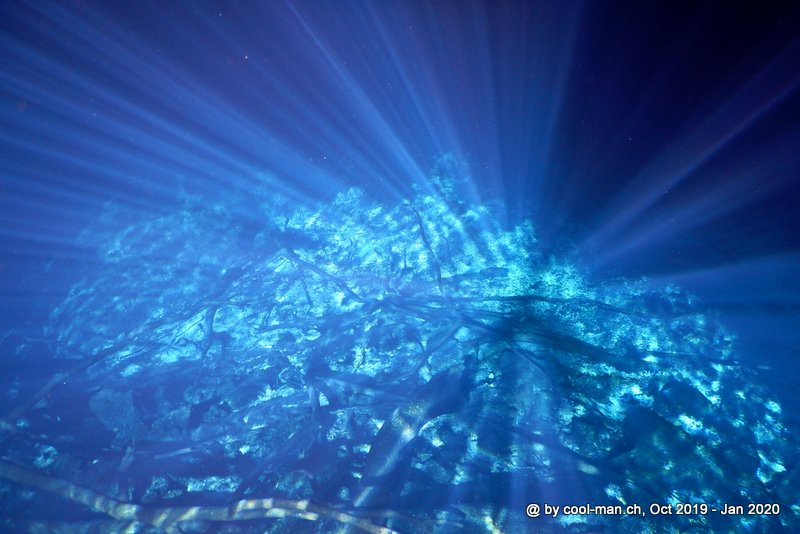 After six days in Tulum, I flew to Mexico City where I met my Swiss colleague who has lived in this city for many years as the director of the Swiss school.

On the first day I went on a discovery tour through the nearby Coyoacán neighborhood. It is one of the oldest areas of Mexico City and was already settled in pre-Columbian times. On one hand it is a cultural center with museums and the house of the famous artist Frida Kahlo, on the other hand it is a quiet residential area with cobblestone streets, parks, squares and many restaurants and cafes.

The Franciscan Church of San Juan Bautista is one of the oldest and most beautiful churches in Mexico. 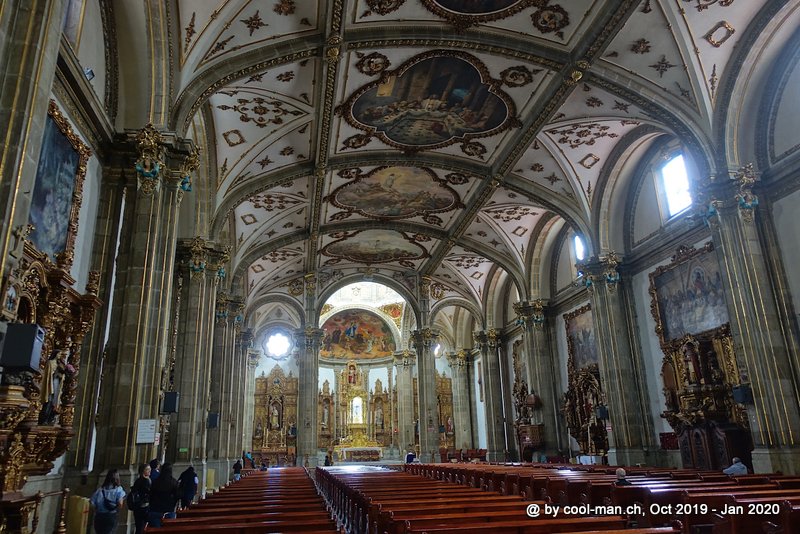 The following day I visited the Mayan site Pirámides de Teotihuacán with a tour. On the way we stopped at the catholic church ‘Basílica de Nuestra Señora de Guadalupe’. It is one of the most famous catholic pilgrimage places in Mexico and receives millions of believers every year. Already holy to the Mayas, the Spanish destroyed the temple there and built a chapel in 1531/32, after the Virgin Mary appeared to the saint Juan Diego Cuauhtlatoatzin on a nearby hill. The basilica was consecrated in 1709. The cloak of Diego with the miraculous image of Our Lady of Guadalupe, which is kept in the church, is particularly venerated.

40 km northeast of Mexico City, Teotihuacan is the largest and most important pre-Columbian city in Mexico. At its heyday in the first half of the first millennium AD, it had a population of up to 125,000, making it one of the largest cities in the world at that time.

The size of the pyramids and the whole complex was impressive. All other archaeological sites on my trip through Mexico, Guatemala and Belize were much smaller.

View of the ” Avenue of the Dead ” as seen from the Moon Temple. The more than one kilometer long boulevard runs through the whole complex. 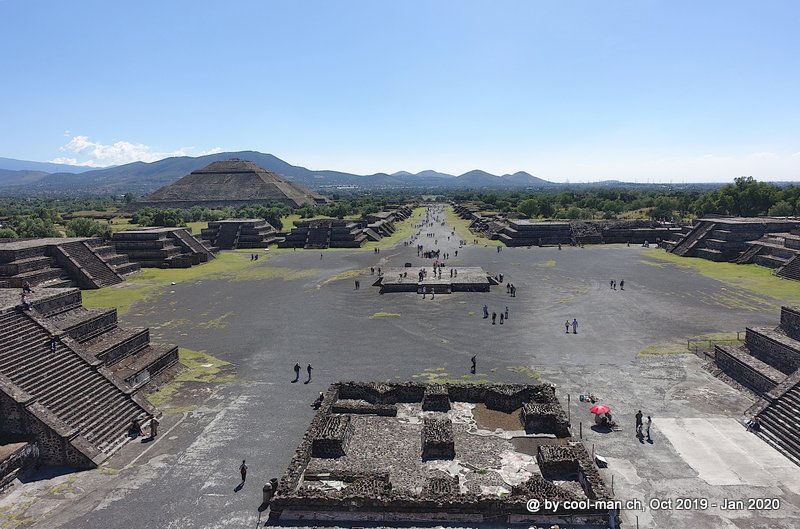 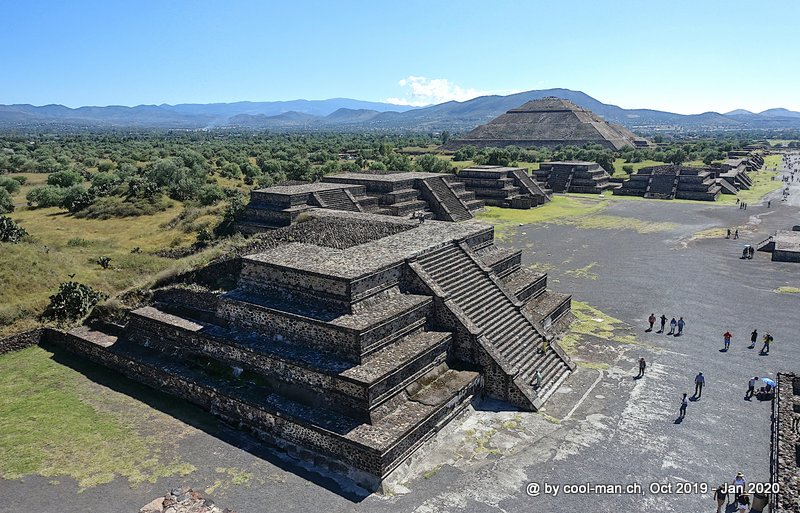 The Pyramid of the Sun is the largest in Teotihuacán and the third largest in the world, with a height of 65 meters and a surface area of 222 m × 225 m. 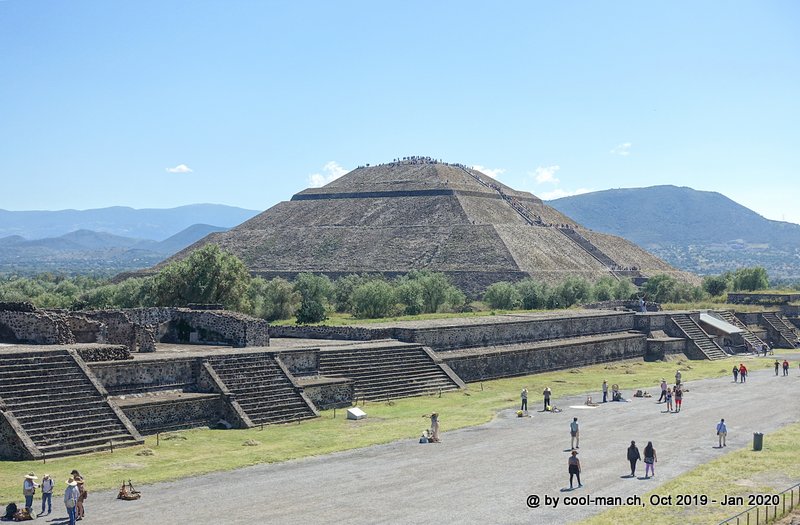 After the visit of Teotihuacán a meal was served as part of the tour. Singers sang traditional songs. 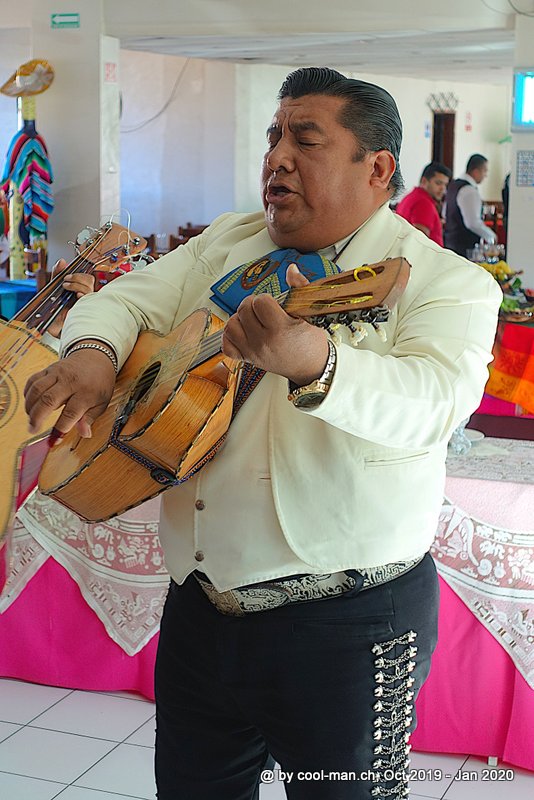 Subsequently, our group was introduced to tequila production. The raw material is the Agave plant. 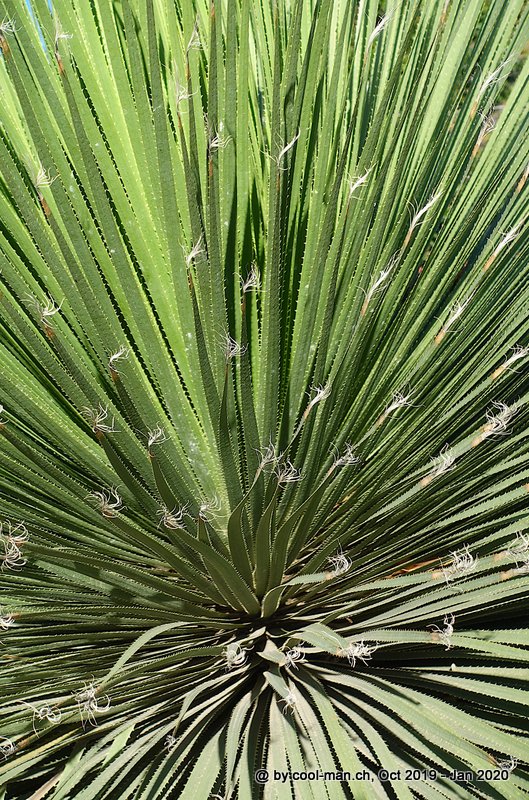 The next day I visited the center of Mexico City.

The church with the full name “Catedral Metropolitana de la Asunción de la Santísima Virgen María a los cielos” is the largest on the American continent with a length of 128 meters. The church was built on a holy district of the Aztecs with stones from destroyed Aztec temples. 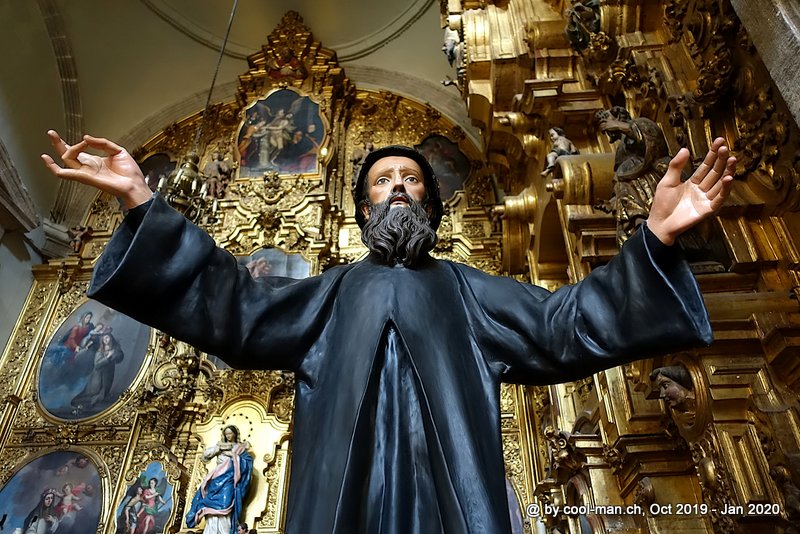 The Great Temple was the main temple of the Mexican peoples in their capital Tenochtitlan, today’s Mexico City. It was dedicated both to the god of war Huitzilopochtli and the god of rain and agriculture Tlaloc. For each god there was a shrine at the top of the pyramid, which could be reached via separate stairs. Because of its enormous size of 100 by 80 meters, the base of the temple was built over through the centuries, but not completely destroyed. Excavation work began at the beginning of the 20th century. Thanks to these excavations and accidental finds in connection with construction work in the area, many artefacts and remains of the temple came to light. The adjoining museum exhibits the finds. 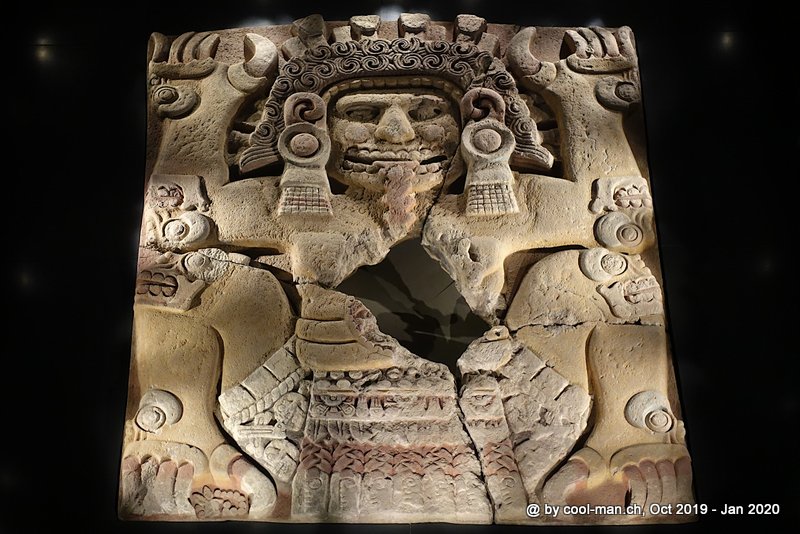 This container in the shape of an eagle, called Cuauhxicalli, was found in 1985. The hearts of the sacrificed people were kept in the opening in the upper part.

The Palacio Nacional houses the offices of the Mexican President and the Ministry of Finance. Like many other buildings, it was built in place of the destroyed palace of the Aztec ruler Montezuma II with stones from the Aztec palace. Especially worth seeing are the wall paintings of the Mexican artist Diego Rivera about the Mexican history from the Aztec culture to the colonial occupation, resistance against the authorities and oppression up to a socialist better future, which corresponded to the spirit of the time (1929 – 1935).

This mural shows the oppression of the indigenous people. 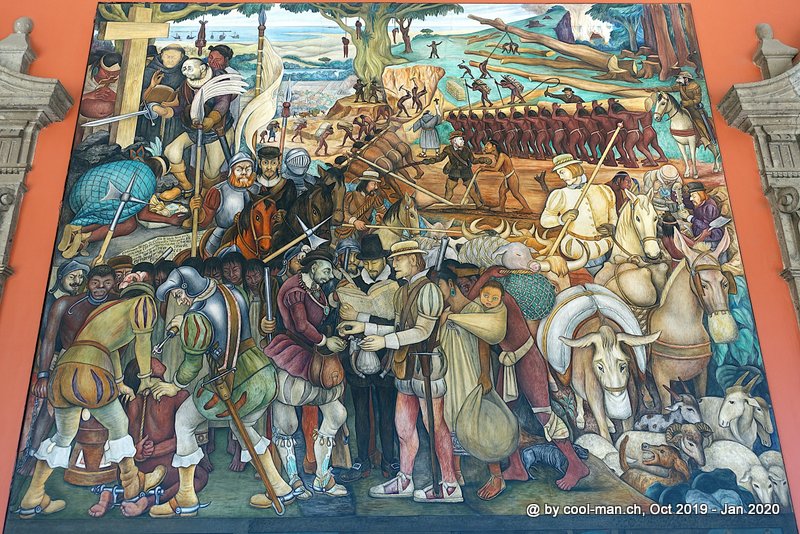 The Palacio de Bellas Artes (Palace of Fine Arts) is an important cultural center in Mexico City, where events and exhibitions in the fields of music, dance, theater, opera, literature, painting, sculpture and photography take place. 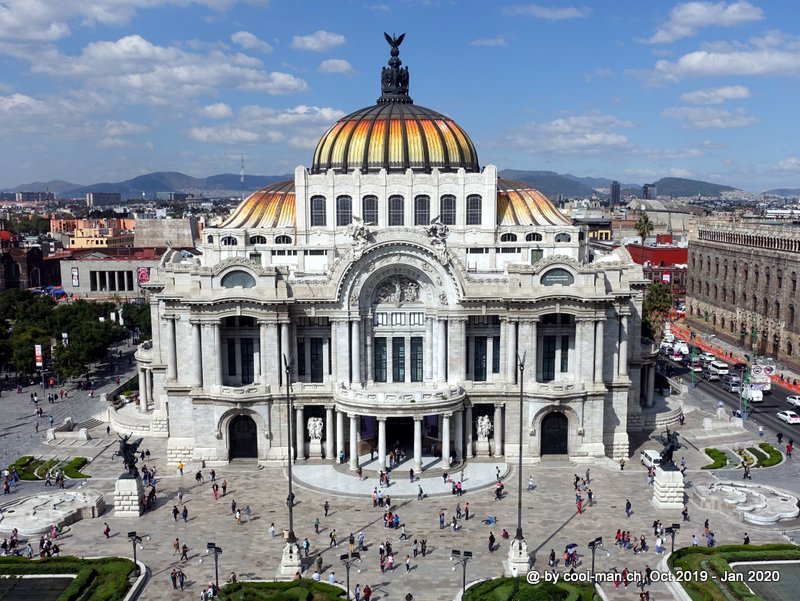 Since my colleague is a gourmet like me, we wanted to visit the restaurant Pujol. According to the San Pellegrino list of the world’s best restaurants, it is number 3 in Latin America in 2019. Although we tried to get a table weeks before the intended visit, our reservation attempts were unsuccessful. We also failed at the 11th placed restaurant Quintonil. Finally, my colleague suggested the restaurant Koma, where Mikel Alonso and Gerard Bellver stage a contemporary Basque cuisine.

The squid tasted as good as it looks. 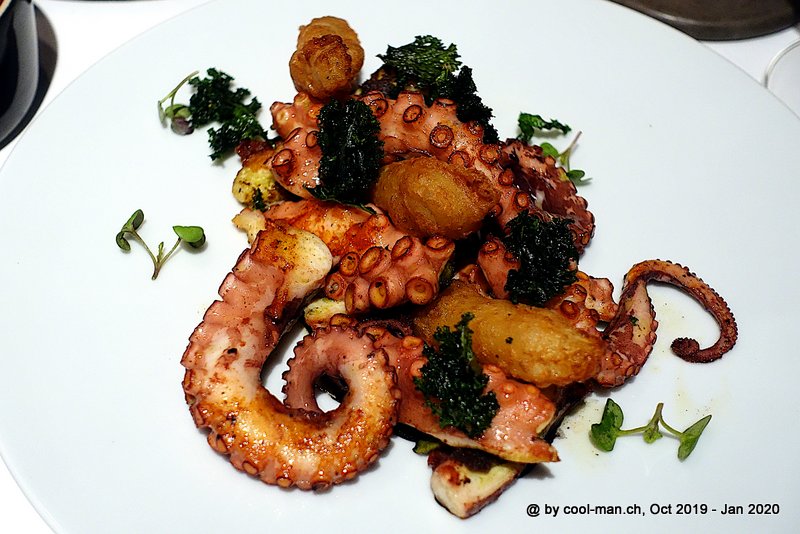 On the last day of my visit to Mexico, I browsed the nearby San Angel Saturday market with my colleague. San Ángel is another quarter with cobblestone streets, tree-lined streets and spacious houses. At the market artists exhibit their works for sale. Countless small shops sell high quality handicraft objects, decorative items, jewellery, clothes and selected foods. There are also good cafés and musicians. 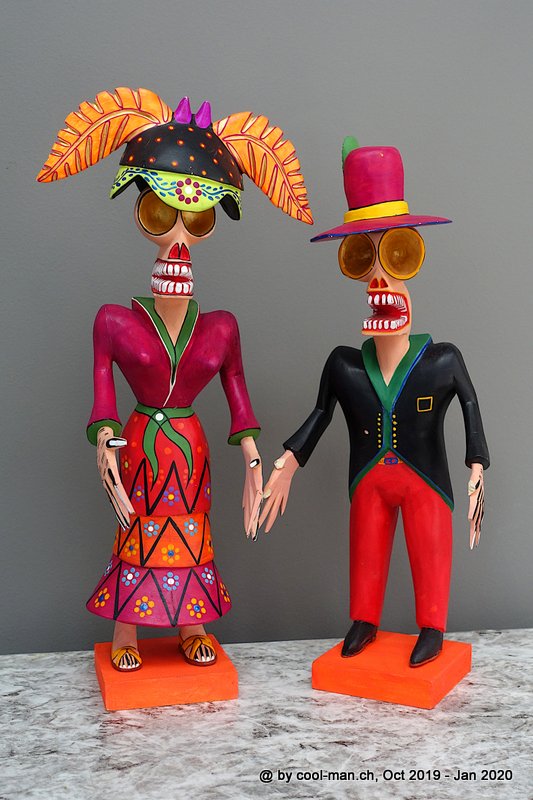 In the afternoon I visited the private Soumaya Museum, the most important art museum in Mexico. It was founded by Carlos Slim, the wealthiest man in Latin America and one of the richest in the world. The museum is named after his late wife. It impressed me with its thousands of works of art by many world-famous artists and its architecture, which spirals up six floors from the entrance. 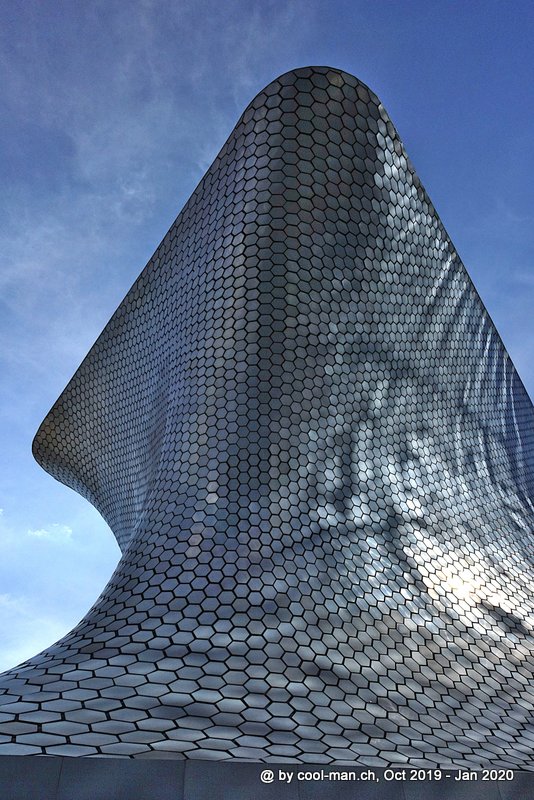 In the evening my colleague took me to a traditional taco restaurant. The dark taco on the right of the picture was made from the flour of the blue corn. 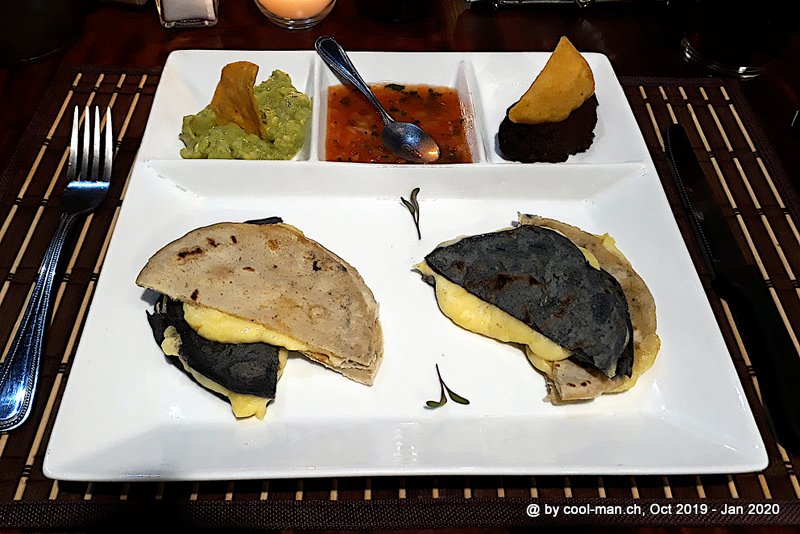 From Mexico City I flew to Guatemala City. After 8 weeks in Guatemala and Belize I crossed the border to Mexico again at the end of December. You can find the second part of my Mexico trip under this link.