I flew from Vietnam to Perth, the capital of Western Australia. A colleague from Switzerland accompanied me on my journey through this Australian state. It is a vast area, more than 60 times the size of Switzerland. In contrast, the population of just over 2 million people accounts for less than a third of the Swiss population. And 1.7 million of them live in the capital of Western Australia, Perth. Especially in the interior of the country, you can travel hundreds of kilometers without finding a settlement. If one reaches a settlement, it turns out that sometimes only a few hundred people live there. In all settlements outside Perth at 9 o’clock in the evening nobody is on the street anymore.

Western Australia lives mainly from the extraction of raw materials, which are so generously available that Western Australia has the highest per capita income of all Australian states. Anyone who wants can find work here. Thanks to the great demand for raw materials, the Australian dollar has also risen again. Australia is now almost as expensive as Switzerland. Coming from Vietnam, I first had to get used to the new price level.

The Australians have a healthy work-life balance. Most shops and cafes are already closed at 5:30 in the afternoon, so there is still time for a barbeque or a trip to the beach after work. Stress is a foreign word here. On the other hand one hears again and again the saying “no worries”.

Perth is a city with a high quality of life, pleasant climate, beautiful beaches, parks and many cycle paths along the Swan River. The city is generously laid out. People live in single-family houses and we have not seen any traffic jams even at peak times. 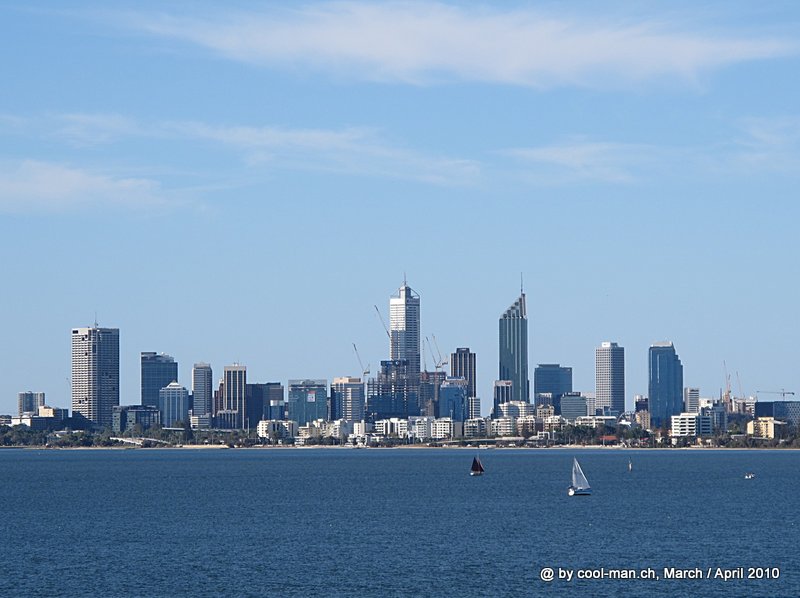 A statue of a kangaroo 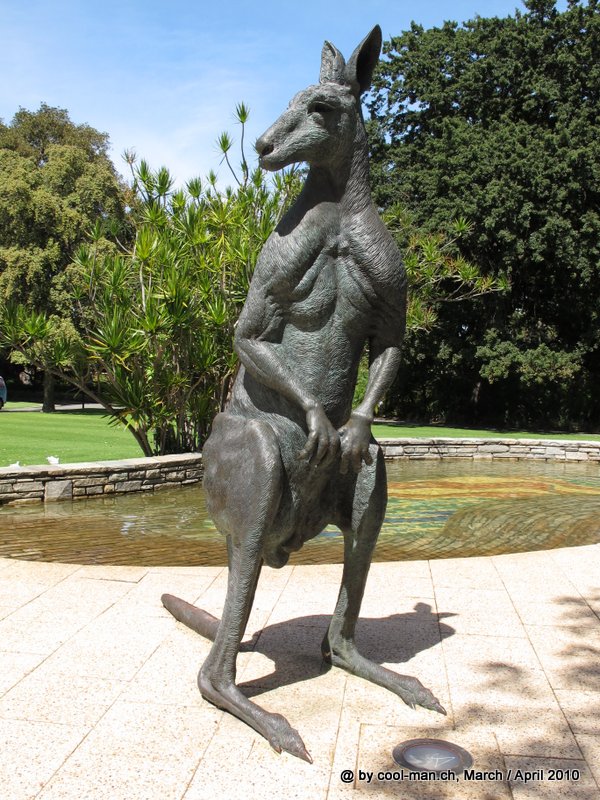 My colleague and I rented a mountain bike for four days and explored Perth and its surroundings. An excursion led us along the Swan River, where we saw the black swans so famous in the financial world for the first time, another time to Fremantle, the city with the harbour, another time to the beaches of Perth, which do not need to fear the comparison with Thai beaches. 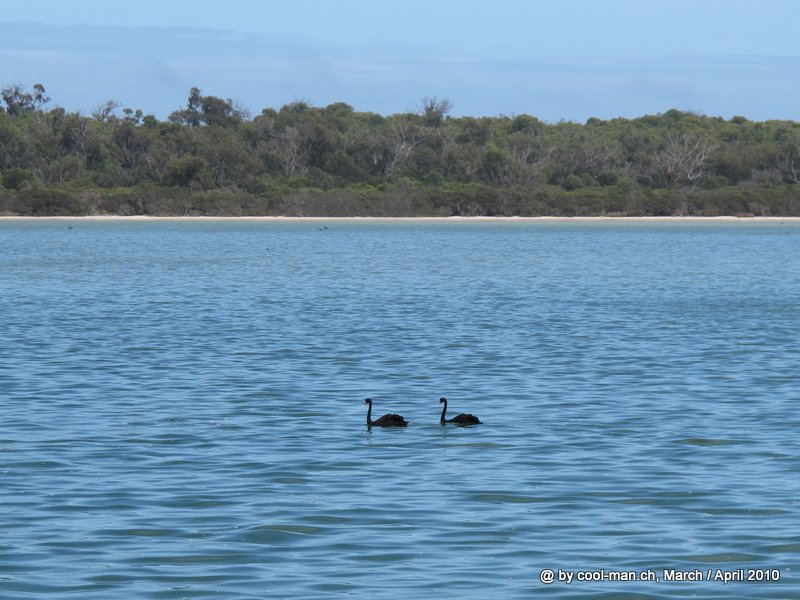 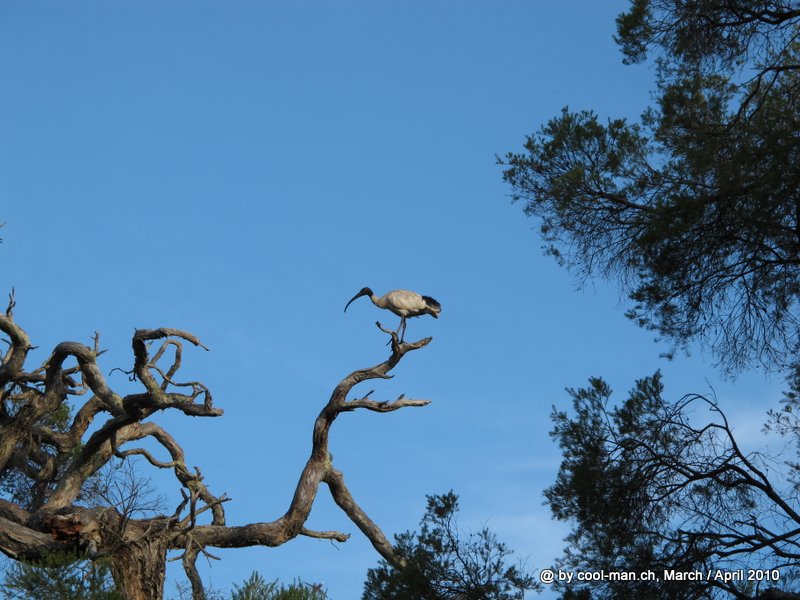 The first time I saw a wild kangaroo was in the Swan Valley. 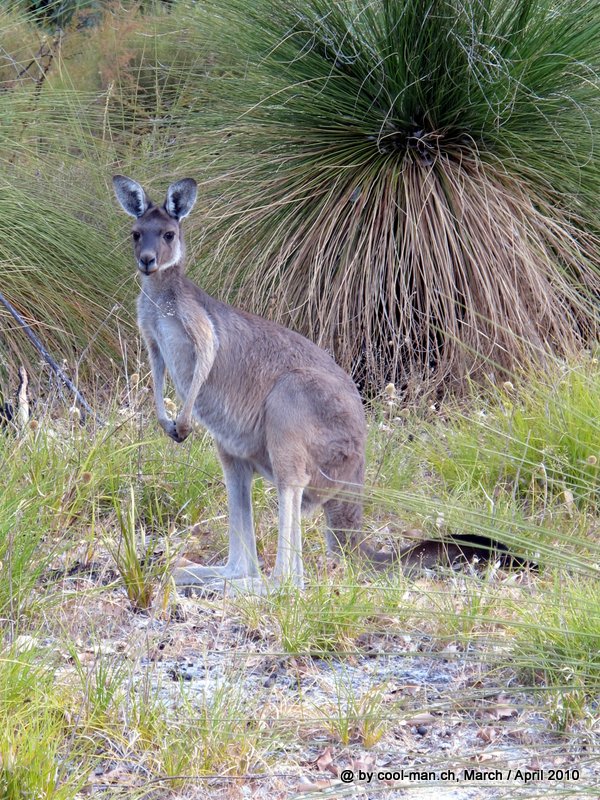 Next we took the train about 600 km to Kalgoorlie. Kalgoorlie is a gold mining town with an eventful history. At the end of the 19th century gold was found in the area. Since then gold mining has been an important economic factor and even today a quarter of the population is still active in the raw materials industry. Already in 1896 Kalgoorlie had a railway connection to Perth and in 1903 the 600 km long water pipeline through the desert was completed. The visionary and initiator O’Connor unfortunately committed suicide 12 months before completion, after he was criticized on a large scale unjustifiably. Kalgoorlie’s water supply is still secured through the pipeline today.

Thanks to excellent museums and guided tours, the time of the gold rush came to life.

With the simplest of aids, the gold prospectors of the time dug for gold. 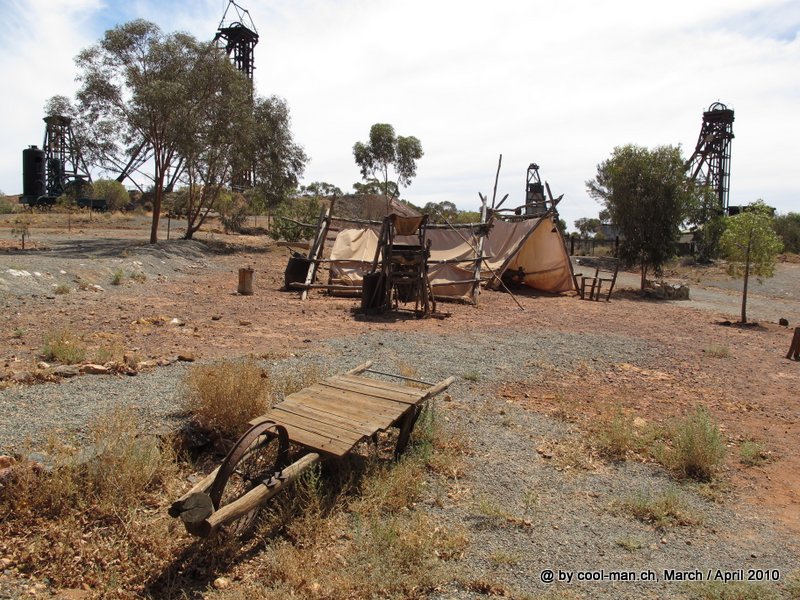 The visitors could witness how gold was melted. 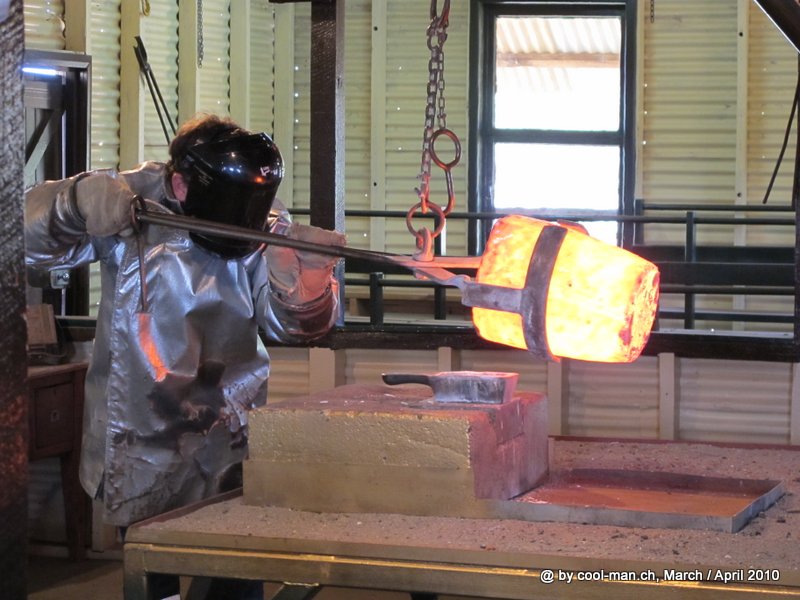 The lives of gold seekers and adventurers were not easy and full of both positive and negative surprises. Many adventurers made the long journey through the desert to Kalgoorlie on foot, others by horse and cart. Even camels were used. Many died of thirst. The biggest finds were discovered by chance, for example during a rest because of a lame horse. The largest gold nugget ever found (35.25 kilograms, 1,135 ounces) was discovered by a playing boy.

The largest gold nugget ever found 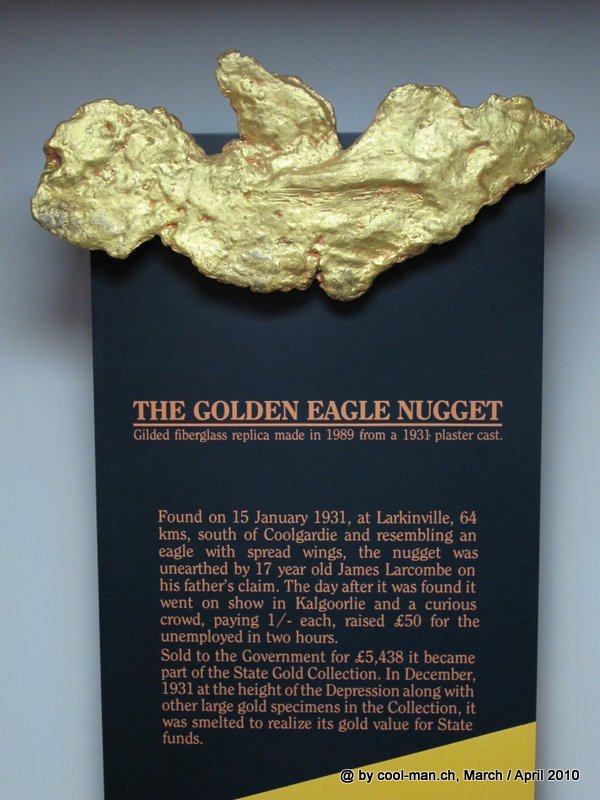 The life of the gold seekers was hard. Women had not often come to this area. So it is not surprising that in Kalgoorlie the two oldest brothels of Australia can be found. As it is apparently appropriate for a real mining town, in many bars is served topless even today.

In this city everything still revolves around gold. The so-called “Super Pit”, the largest open gold mine in Australia, is only a few kilometers away from Kalgoorlie. Today the mine is 3.5 km long, 1.5 km wide and 350 m deep and produces 28 tons of gold annually. And it is being dug deeper and deeper. 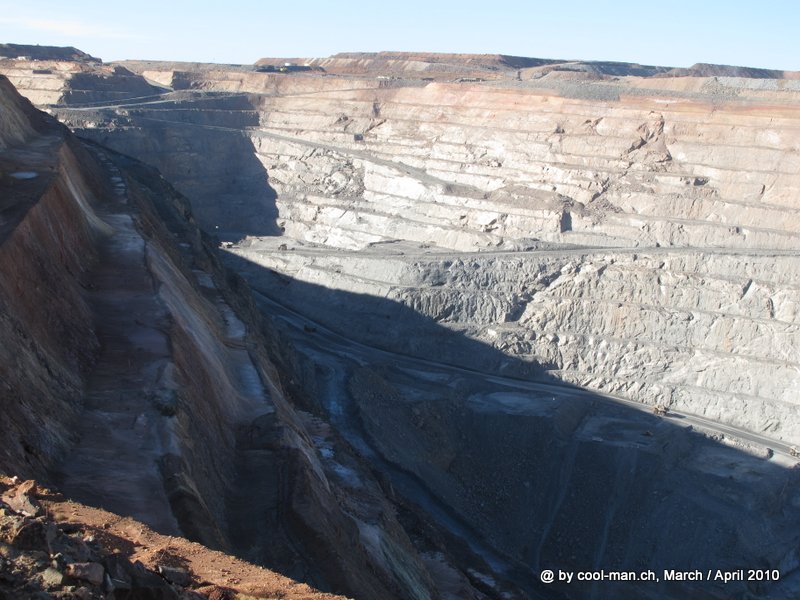 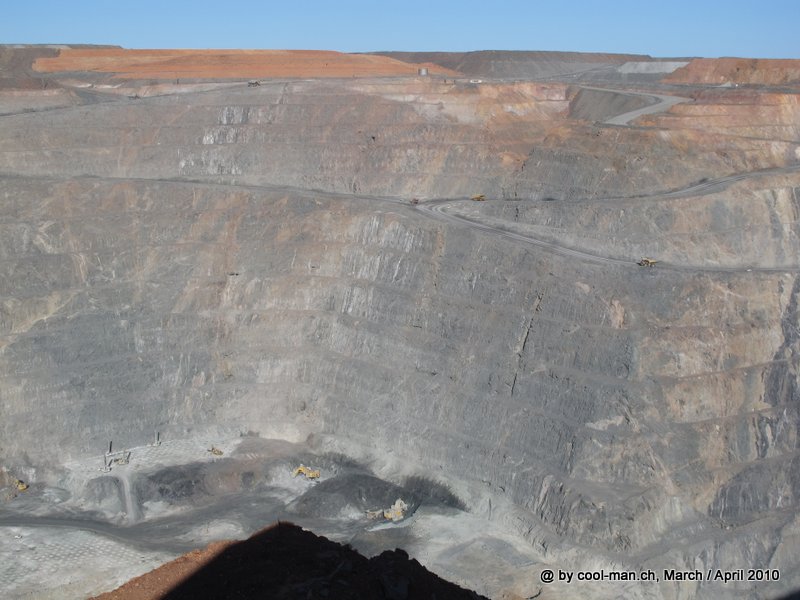 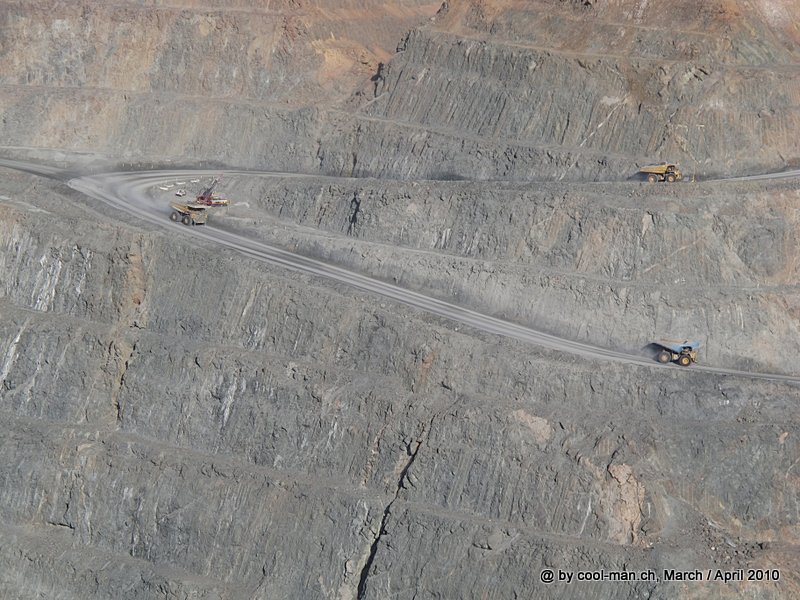 Gold is a daily topic in the local newspaper. In the city’s largest hotel there is an electronic treadmill that displays the current price of gold. 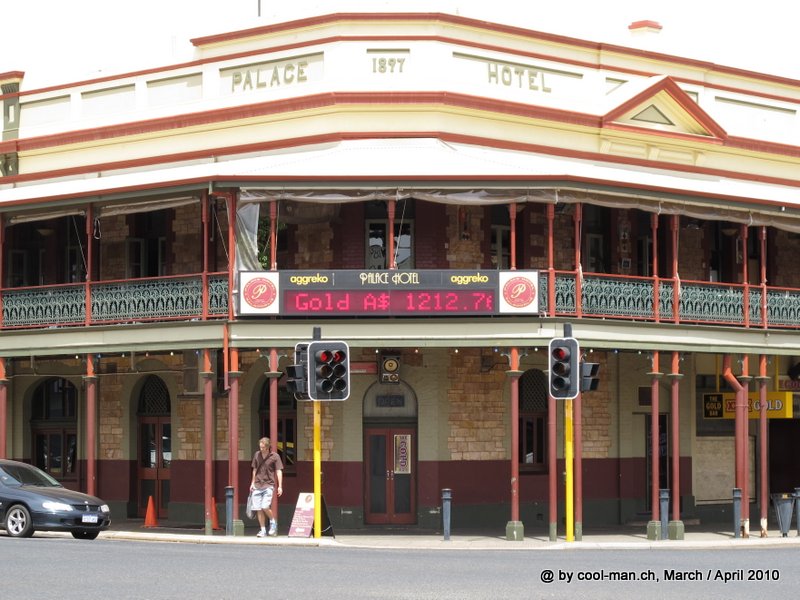 The time of adventurers is not over yet. Even today there are people who are walking through impassable areas with metal detectors and hope to make the discovery of their lives.

Back in Perth we took a camper bus which was our home for the next three and a half weeks.

After stays in Bunbury and Yallingup we stayed much longer in Margaret River than planned. The area is the largest and best wine-growing area in Western Australia. Soon other gourmet businesses such as small breweries, olive oil producers or a chocolate factory settled here. In addition, some wine producers have excellent restaurants overlooking the vineyards.

At a wine tasting session 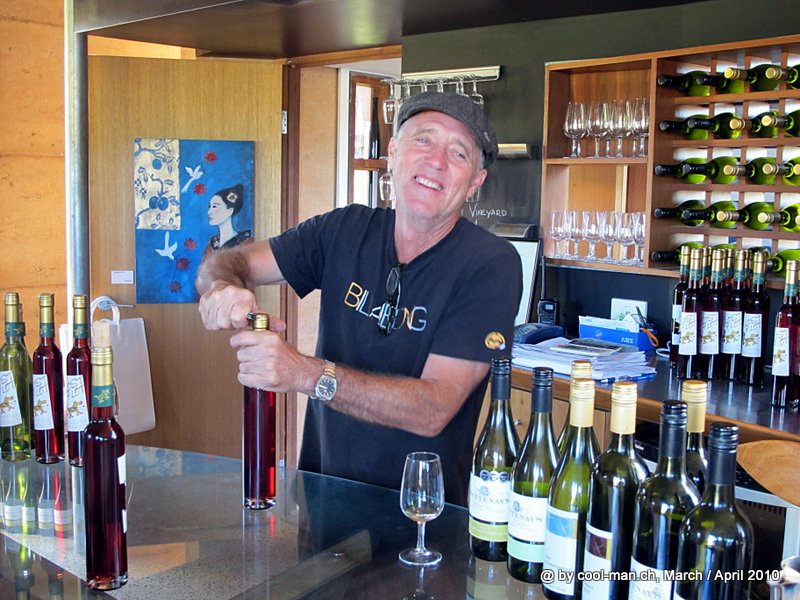 A paradise for gourmets! I discovered Australian beer here. Nowhere have I drunk better beers. The dark stouts are a dream, as are the Pale Ale’s. Even the yeast beers taste better than in Germany. This is all the more astonishing as many breweries were founded only 10 to 20 years ago, but by innovative beer enthusiasts who attach great importance to quality. At every small brewery that was somewhat on the way, we made a stop. Unfortunately, I have to mention it, the Swiss beers are only standard products without character. Margeret River also has ideal surf beaches. During our visit an international surf competition was taking place.

On the coast of Margaret River 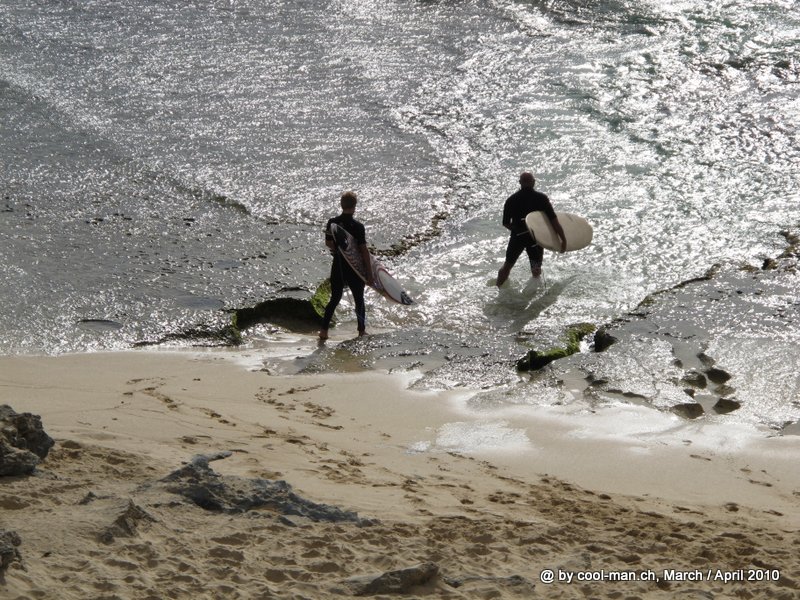 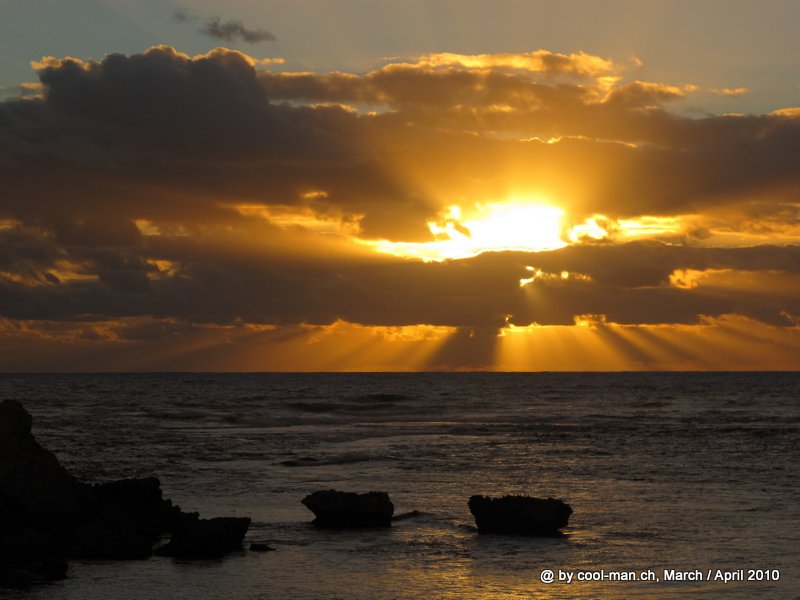 Our journey has developed more and more into a gourmet trip. Everywhere we enjoyed the many fine local specialities.

We went on to Pemperton, where huge forests of karri trees can be found. These grow up to 65 meters high and some trees can be climbed up to this height with ladders. From up there you can enjoy a fantastic view.

Birds in the Kari forests 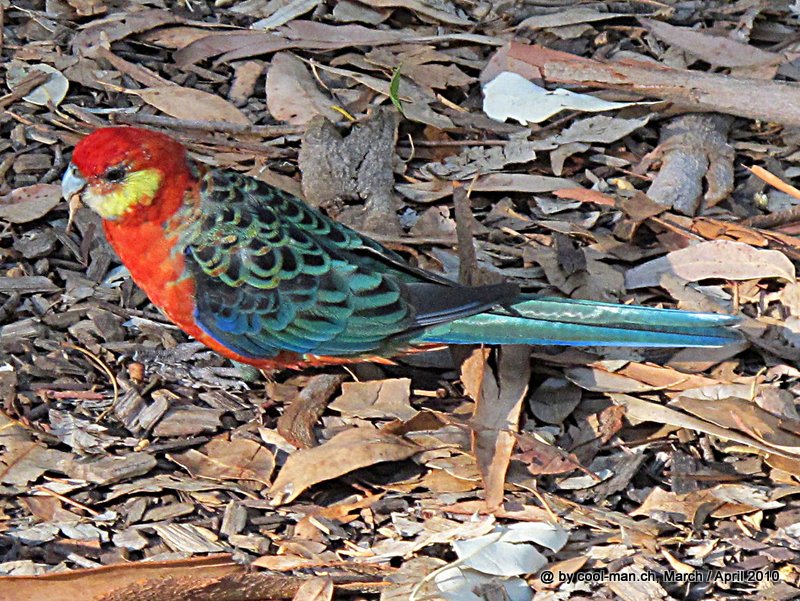 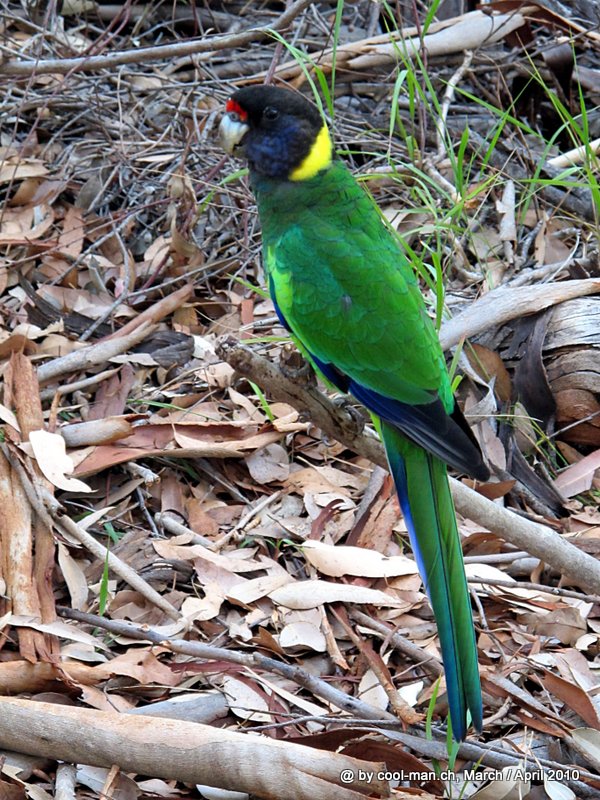 In Pemperton I found “Marron”‘s on the menu, a freshwater crayfish native to the rivers around Pemperton, almost as big as a lobster. Delicious! 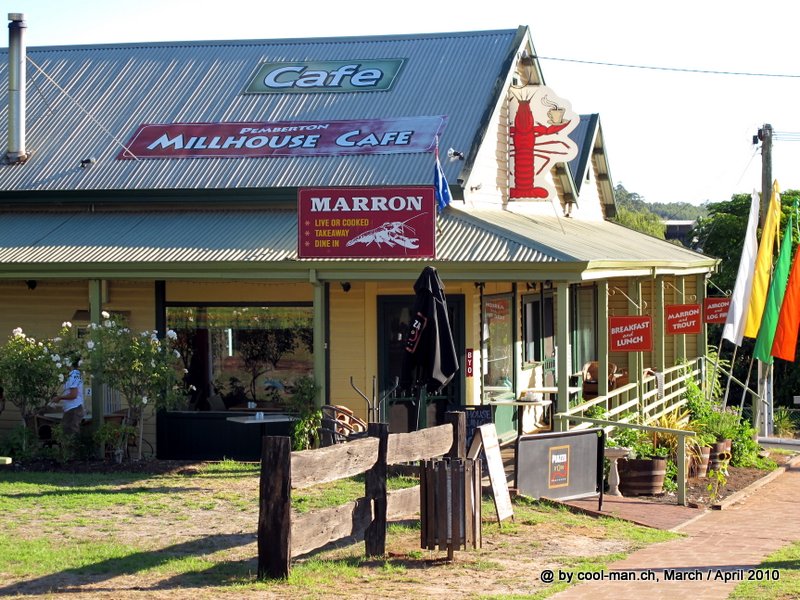 And there was this micro-brewery … 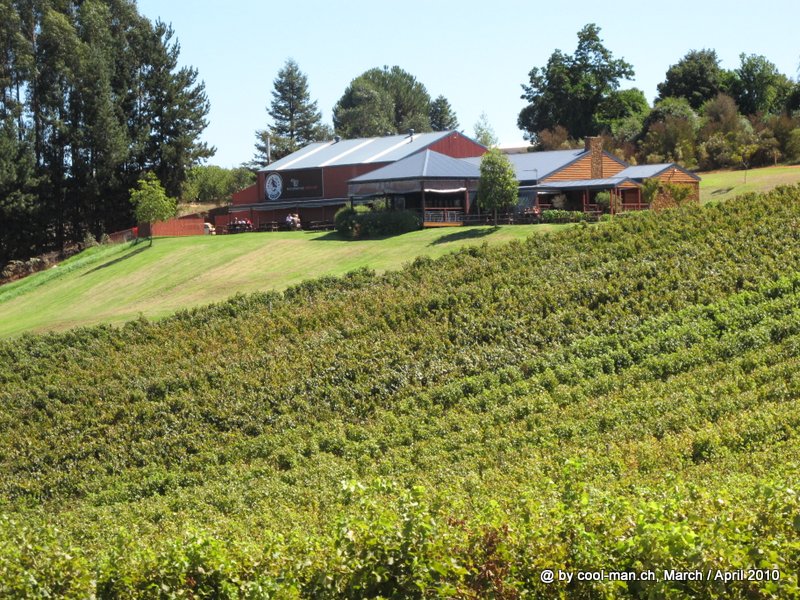 After a drive of several hundred kilometers we arrived in Esperance. It is a place far away from everything with wonderful, lonely beaches. The “Great Ocean Drive” leads from one dream bay to another. Everywhere you want to stay longer, but the next bay has to be discovered as well …

One of the bays around Esperance. On the beach you can see my colleague. 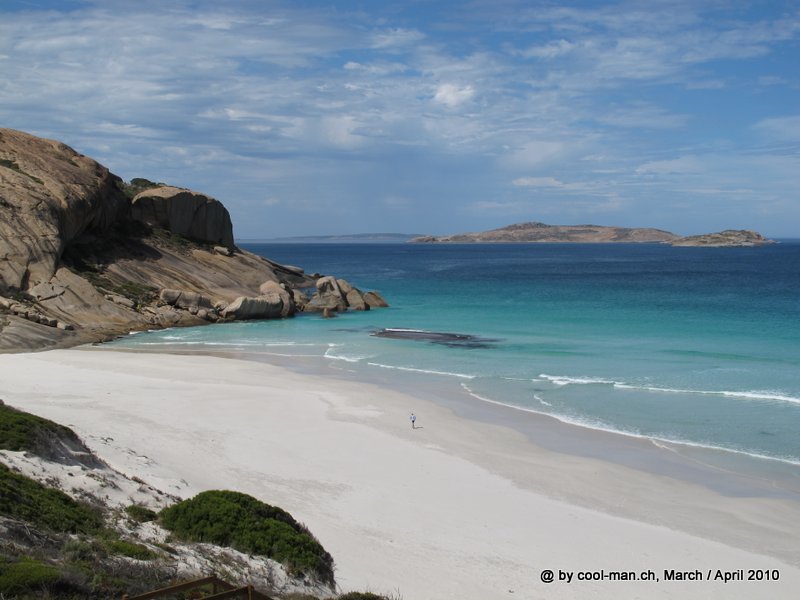 Oh yes, in Esperance there were yappies on the menu, a local crab, smaller than the Marron, perfectly prepared. I could still smell the sea. I ordered a second plate …

Back on the way to Perth we drove inland where we visited Wave Rock. One side of a huge 60 million year old monolith looks like a 15 meter high wave over 110 meters. The many colors have been formed over time by mineral-rich spring water that occasionally flows over the rocks. 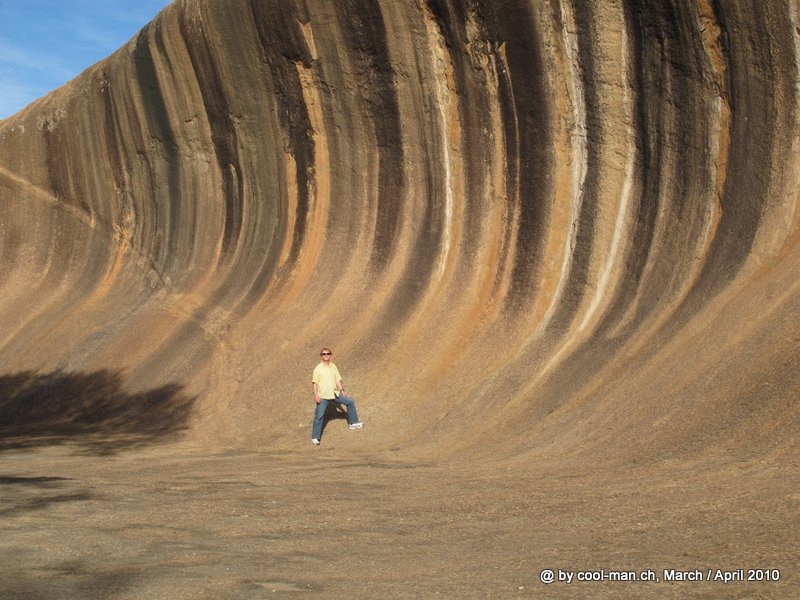 The next destination was York, the first city in Western Australia to be founded inland. Since the gold rush in the outback, when the city performed a supply function, not much has changed in terms of urban development. Today, the city consists only of historic houses. For the tourists (i.e. for us) there were two gourmet restaurants. 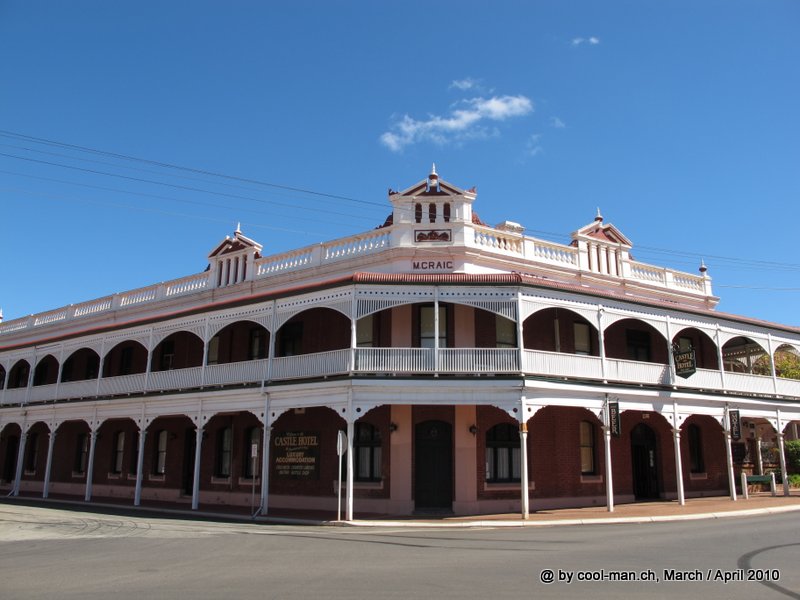 On this sunny Sunday, the motorcyclists made a stop in York and races of historic cars took place in the neighboring city. 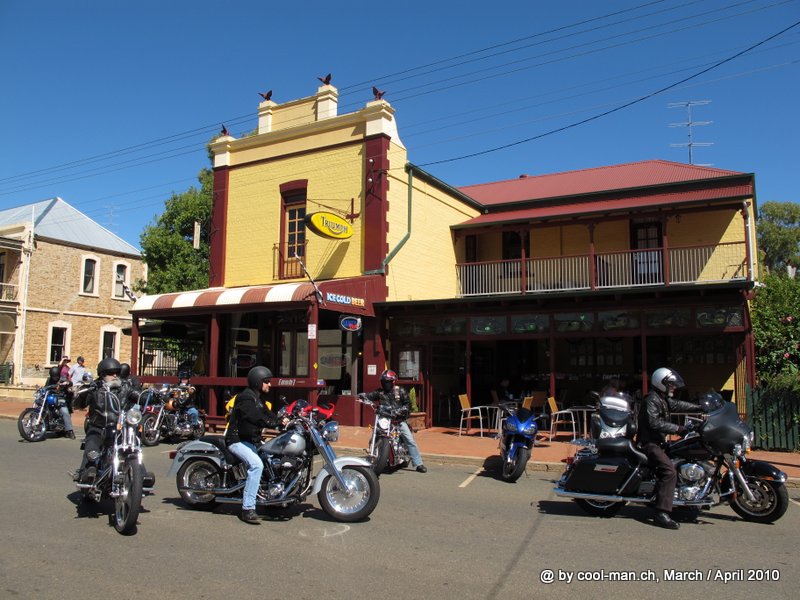 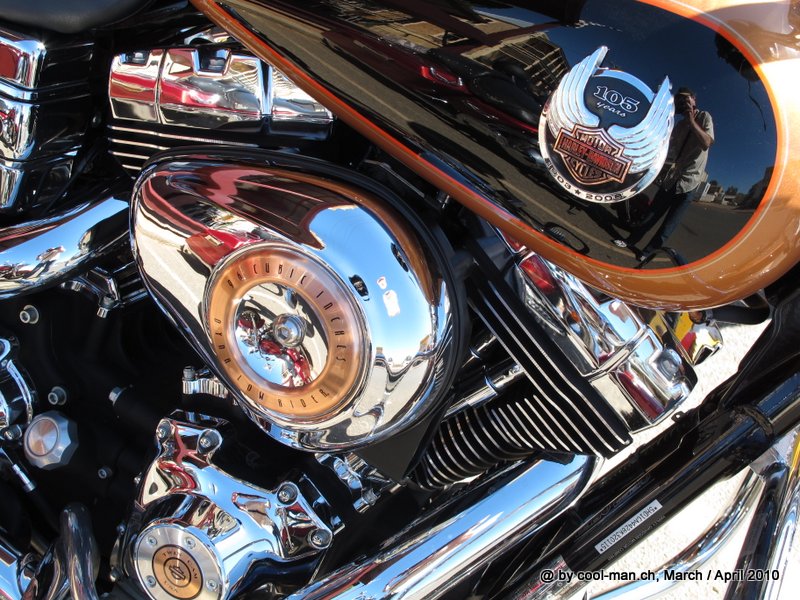 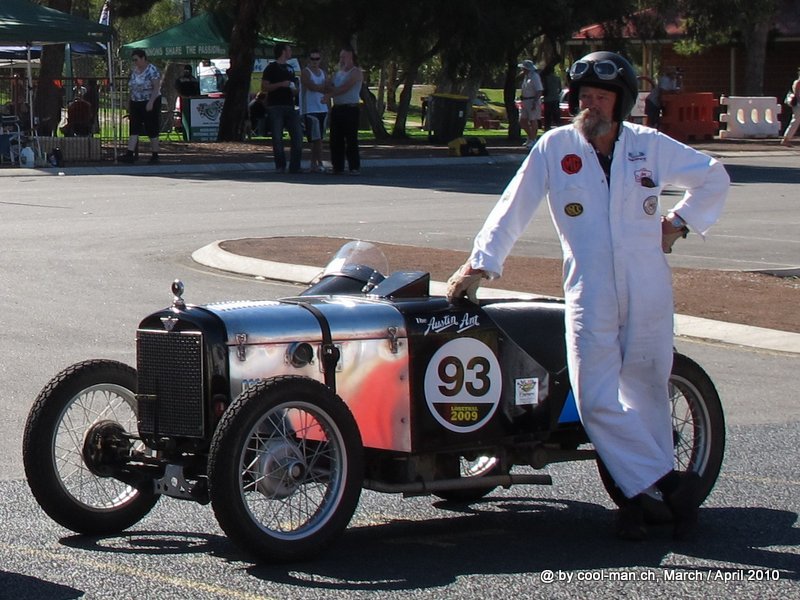 The Pinnacles Desert was our next destination. Here thousands of limestone rocks are moon-like distributed over a gold-colored desert. On our hikes through the desert we saw kangaroos and emus. It was a very special experience. 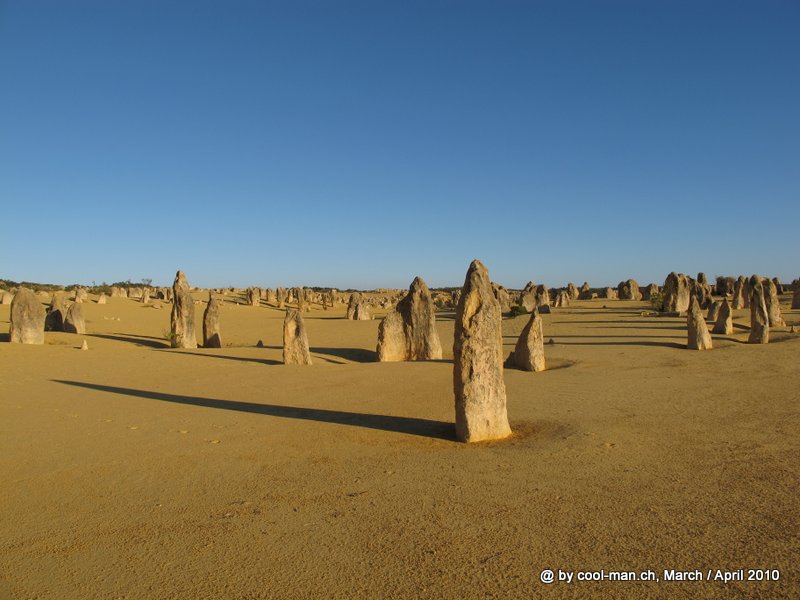 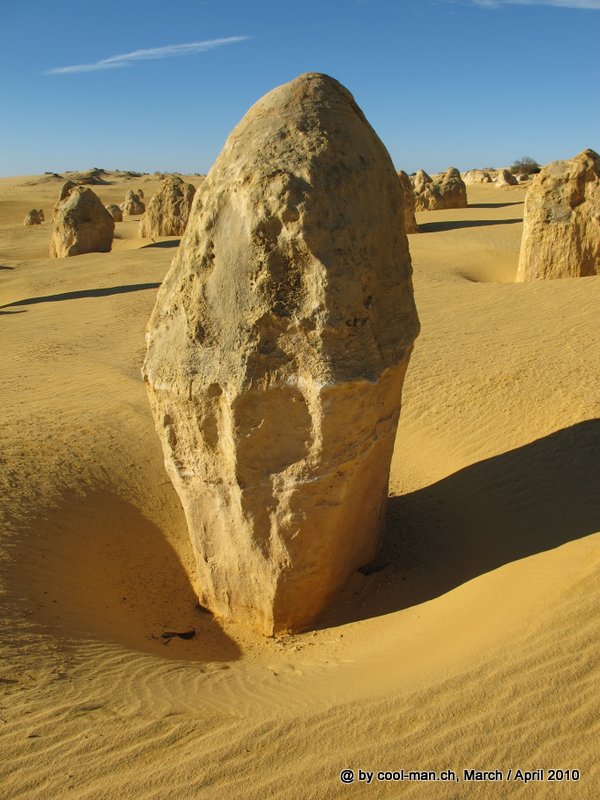 The last days we spent in Jurien Bay, a settlement north of Perth with beautiful, lonely beaches (once again), where lobsters and crabs are caught and eaten (once again). 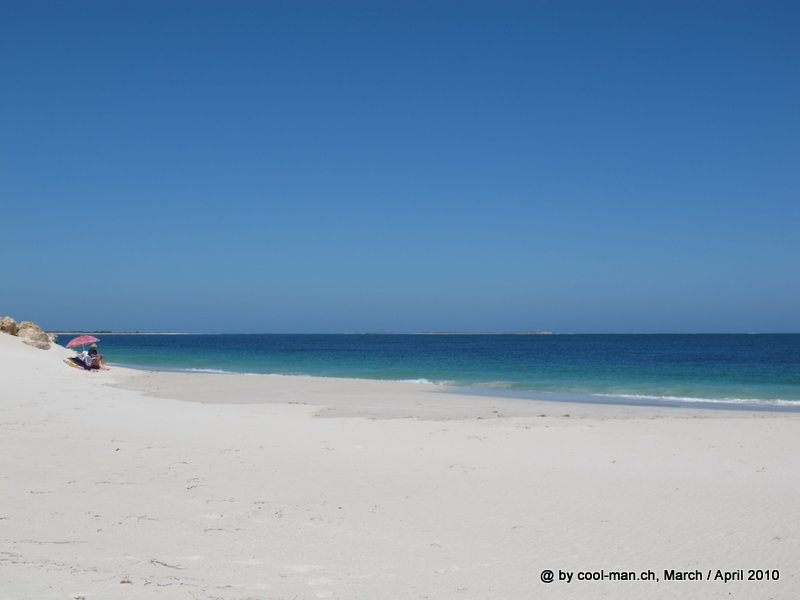 On the way back to Perth we stopped in the Yanchep National Park where we could observe koalas.

Travelling with the camper was uncomplicated. There were many camping/caravan sites that offered good and clean sanitary facilities. On every place there were gas grills, which were used by the Australians. Also we had noticed the advantages soon. Grilling is easy and the meat costs in the shop a fraction of the restaurant price. A kilo of rump steak (that’s how much it takes for two people) only cost about 10 Australian dollars. 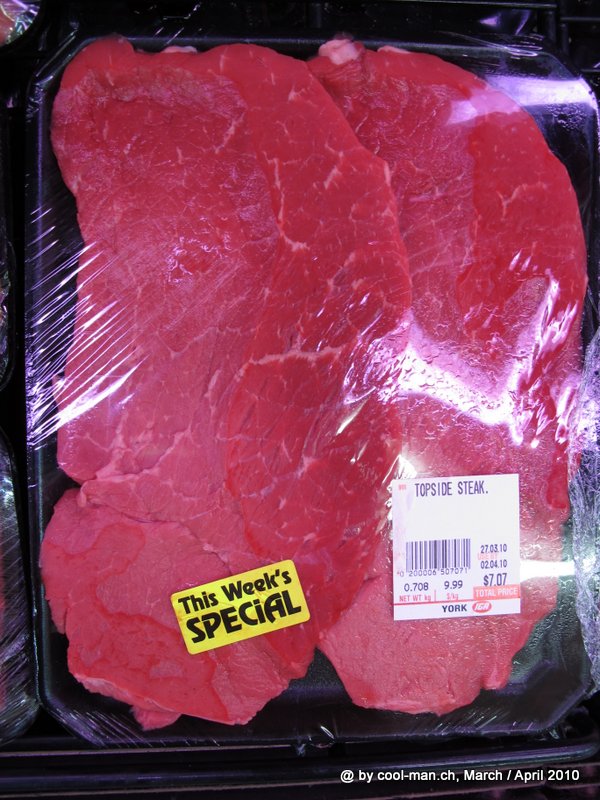 All in all, I liked Western Australia very much, like many other Swiss people we met. Outside Perth, every third international tourist was probably Swiss. We were told that since the financial crisis Americans and Englishmen, who had been frequent guests before, have hardly come since.