This website is part of the description of my journey through the Baa Atoll. Besides Dharavandhoo I visited the following islands: Fehendhoo, Fulhadhoo, Goidhoo, Thulhaadhoo, Maalhos, Kamadhoo and Dhonfanu. At the end of the website you will find the link to the next island.

From Kamadhoo I took the local ferry to the island of Dharavandhoo, the last destination on my journey through the Baa Atoll.

Dharavandhoo is only 1.5 km long, but has an airport with a runway that stretches the entire length of the island and occupies the southern half of the island. This makes Dharavandhoo the transport hub of Baa Atoll.

An aircraft on approach

There are a few cafes at the harbor and many guest houses. These fill up during the high season between May and November, when hundreds of Manta Rays populate nearby Hanifaru Bay.

A popular excursion destination is the island of Dhonfanu, 3 km away, where Green sea turtles live.

The Bikini Beach is in the northwestern part of the island. Unfortunately, this is where the island’s garbage dump is located, which is always burning and, depending on the wind direction, blows biting smoke onto the beach. This is why the few, mostly Russian speaking tourists sunbathed in the back part of the beach close to the forest, as there, the fumes could not be smelled anymore.

The Bikini Beach. In front of the beach is the snorkeling area. On the right side of the picture you can already see the beginning of the runway of the airport. 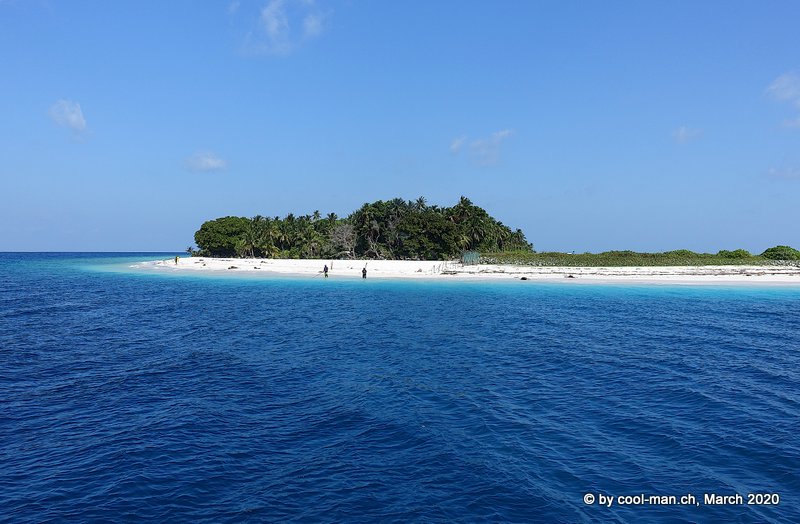 On the Bikini beach you will often find fishermen. If you are a snorkeler, you have to be careful of the thrown out hooks in this section. 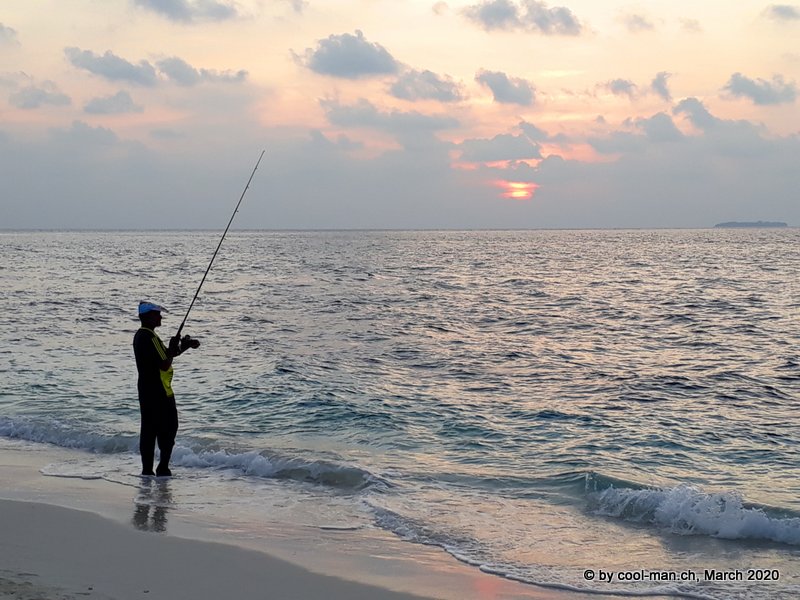 From the bikini beach you can watch beautiful sunsets. Unfortunately the fumes of the nearby waste dump disturb the experience at times.

The snorkeling area starts at the end of the path that leads to the northwest end of the island and extends to the area before the beginning of the airstrip.

Although the island Dharavandhoo with its airport is not a natural beauty, I was very positively surprised about my snorkeling experiences. For me this is the best snorkeling area I encountered during my trip around the Baa Atoll, because the biodiversity was very high, as the following photos show.

Right at the beginning I saw this Giant moray eel. 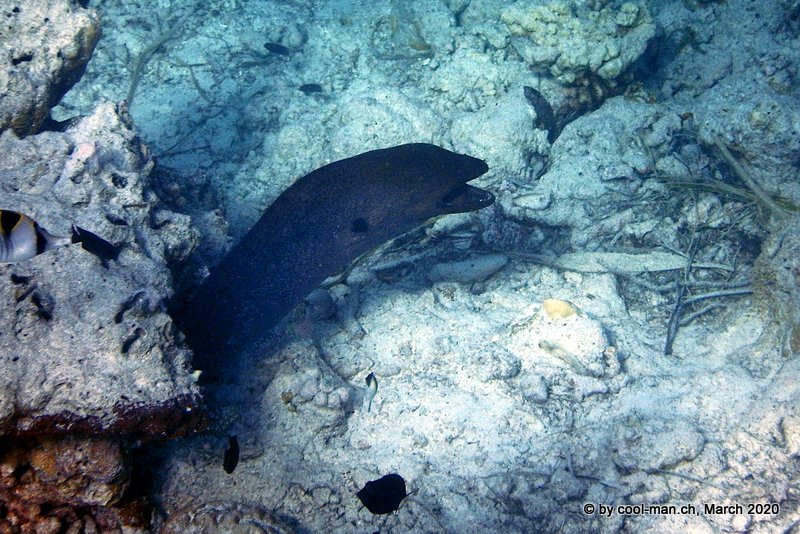 I encountered these animals again and again in the following days.

The Blue blanquillos are found in the area in front of the airport runway. 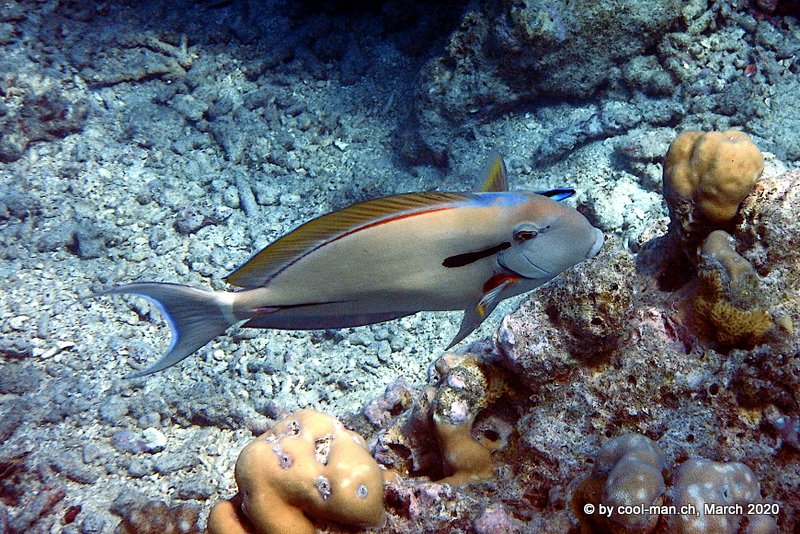 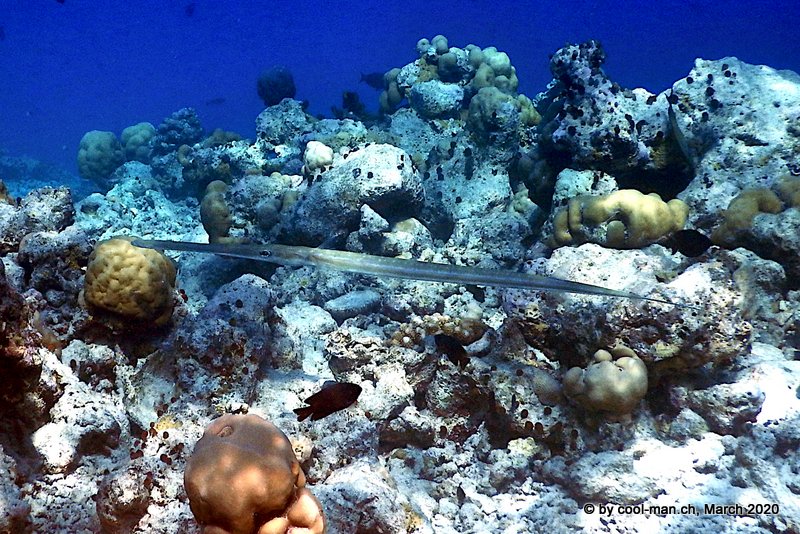 I also met these Hawksbill sea turtles from time to time. 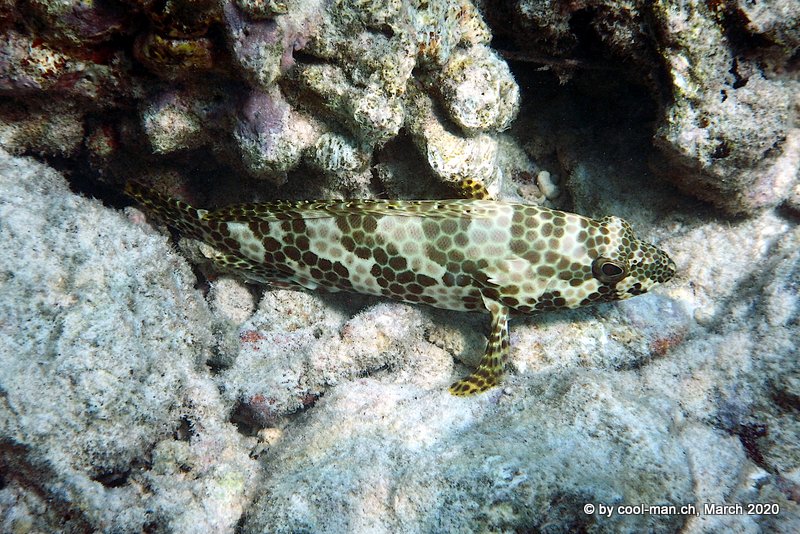 This wrasse species is probably an Ornate wrasse. 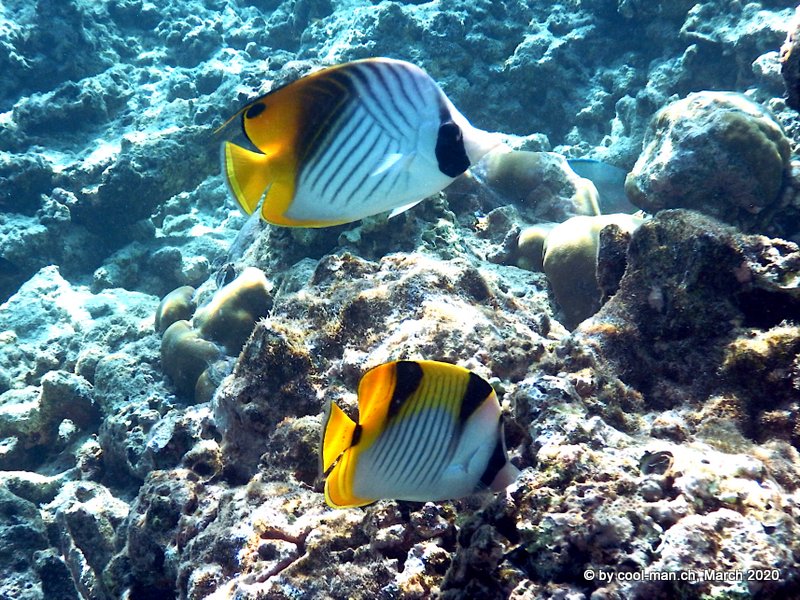 A Regal, Royal or Empress Angelfish 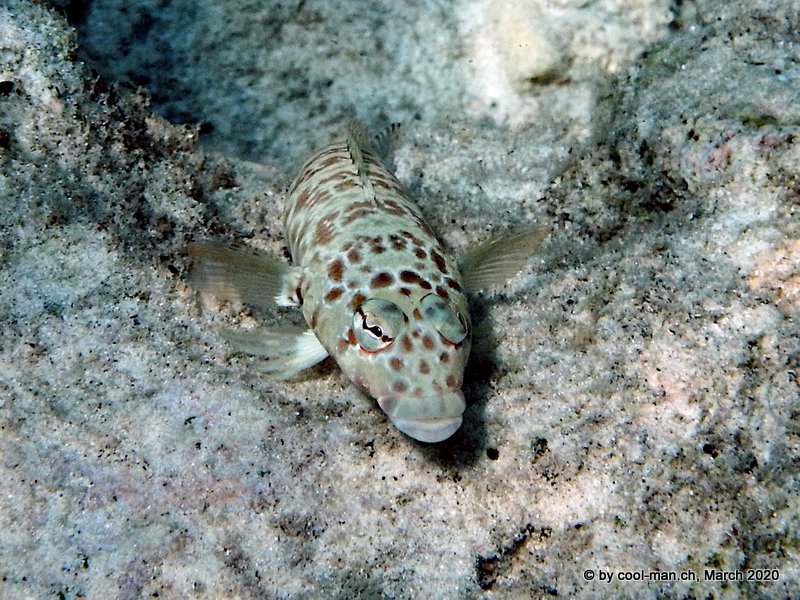 A Titan triggerfish and on the right a Black-wedged butterflyfish

I met this scorpion fish – probably a Tasseled scorpionfish – for the first time. 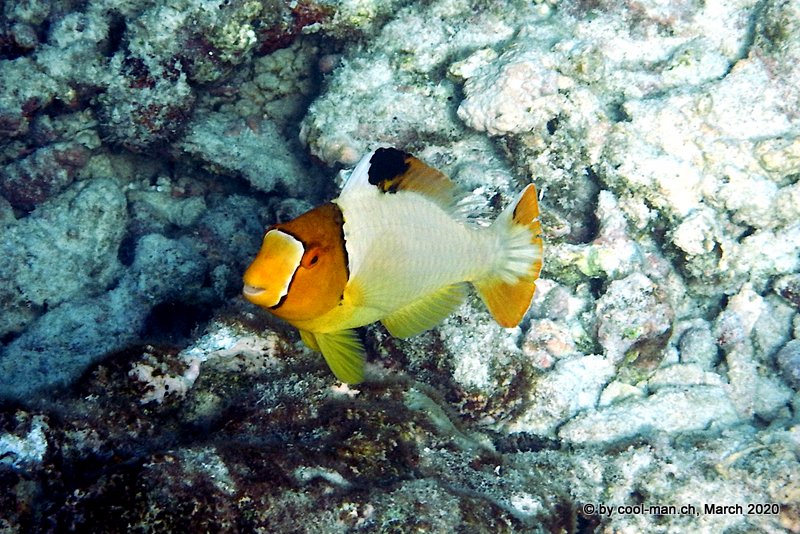 And an adult Bicolor parrotfish

I encountered this Silverspot squirrelfish for the first time.

This seems to be a rare sand perch species, because I could not identify it. 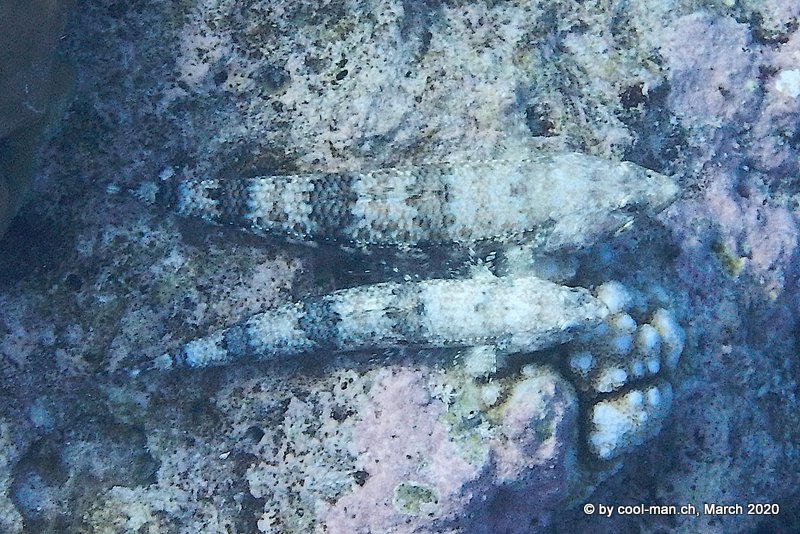 From Dharavandhoo I made a trip to the island of Dhonfanu, 3 km away, on the last day before my departure.

With this my trip through the Baa-Atoll ended after the allowed stay in the Maldives of 30 days. I flew back to Male.

Shortly before Male, the island Farukolhufushi appears, which was enlarged by filling it up and is supposed to accommodate the constantly growing population.

The same day I traveled on to Sri Lanka, where I stayed for 10 days. Afterwards I wanted to fly to Gan and during another month I wanted to travel the south of the Maldives with the atolls Seenu, Gnaviyani and Gaafu Fhaalu. Shortly before the trip to Gan the hotel informed me about its closing due to the pandemic and recommended me not to fly to Gan. To avoid travel restrictions such as possible forced quarantine, flight cancellations and entry bans, I decided to cancel my trip and return to Switzerland. Two days later I was already on the plane home, just in time before the closing of the airport in Colombo, Sri Lanka.

This meant that the other planned destinations Abu Dhabi, Azerbaijan, Armenia and Georgia were also cancelled. I wanted to visit these countries from mid-April until the end of May.

Thus my winter journey 2019/20 ended after 4 1/2 instead of 7 months. At least I could see the impressive countries Guatemala, Belize and Mexico on this trip.