I love deserts, be it the Wadi Rum desert in Jordan, the Atacama desert in Chile, the Negev desert in Israel, the Sonoran desert in the southwest of the USA or the deserts in Morocco. The landscapes are mostly spectacular, the sun shines every day and due to the low humidity you hardly sweat.

But my favourite desert is the one in the northwest of Argentina around Cafayate. In addition to the above-mentioned advantages, there is a great wine-growing area here, which contains the world’s highest wine areas. I was in this area as early as 2015 and have stayed much longer than originally planned.

So it was clear that I would visit this area on this trip to Argentina. I also remembered the village of Purmamarca with its spectacular landscape.

The travelogues of my two previous trips to Argentina contain many descriptions which I will not repeat. It is therefore worthwhile to look at them again. They can be opened with the two links below.

I flew to Salta on the same day I arrived in Argentina as I visited Buenos Aires several times before. For a description of Salta, see the 2015 travel report.

The Church of the Franciscan Order in Salta 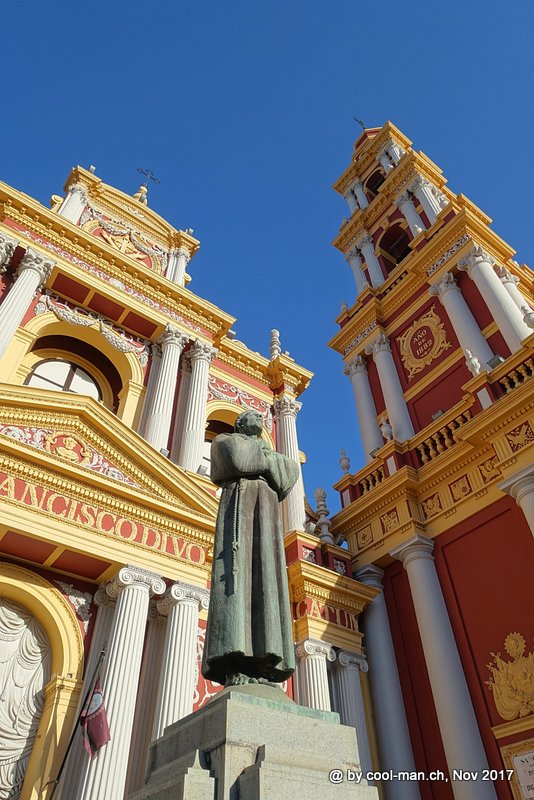 A visit to the Don Salvador Restaurant was also a must. It’s definitely one of the best in town. 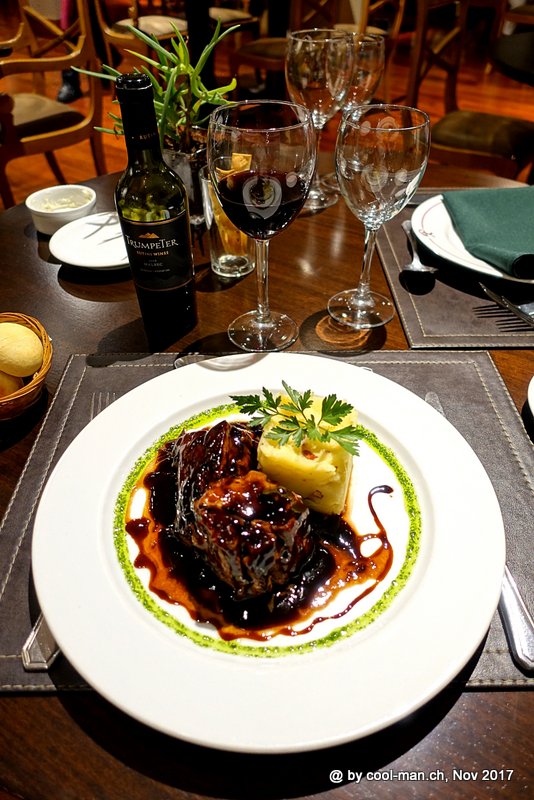 I have reserved two weeks for the little village of Cafayate. For me, there is hardly a place where the combination of peaceful life without stress and traffic, spectacular landscapes, great wineries and good food reaches this level.

The village of Cafayate seen from Cerro Santa Teresia

Two years ago, the Piatelli winery had the best restaurant. Soon I checked if this was still true. The photos below do not convey the taste. But also this time Piatelli was top notch. 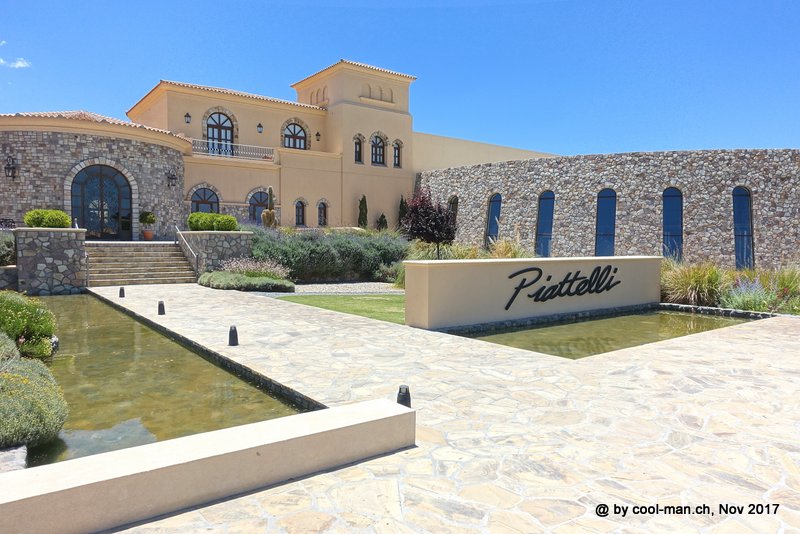 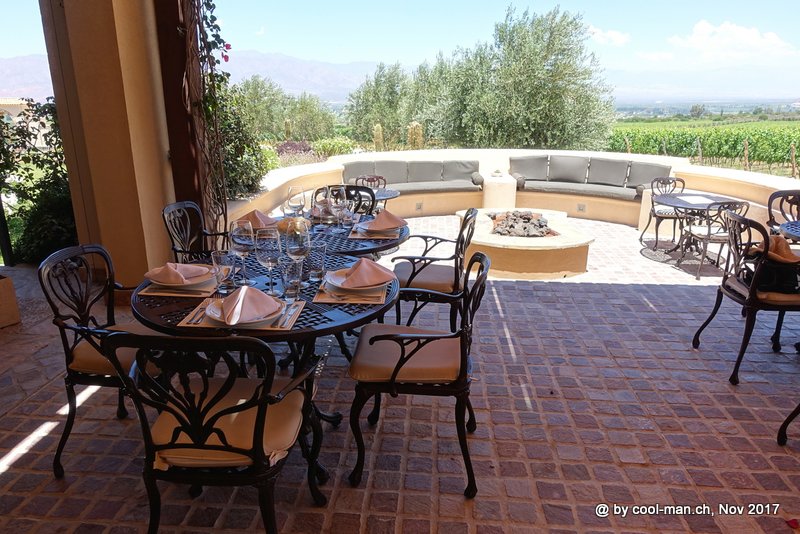 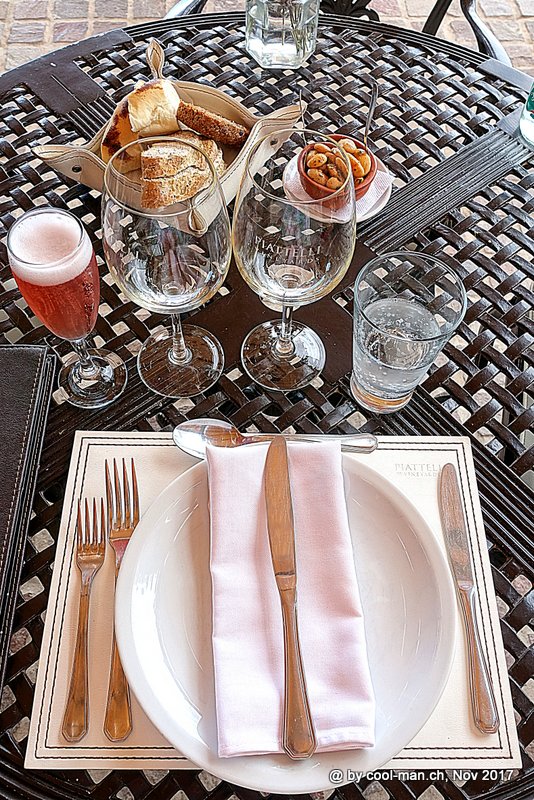 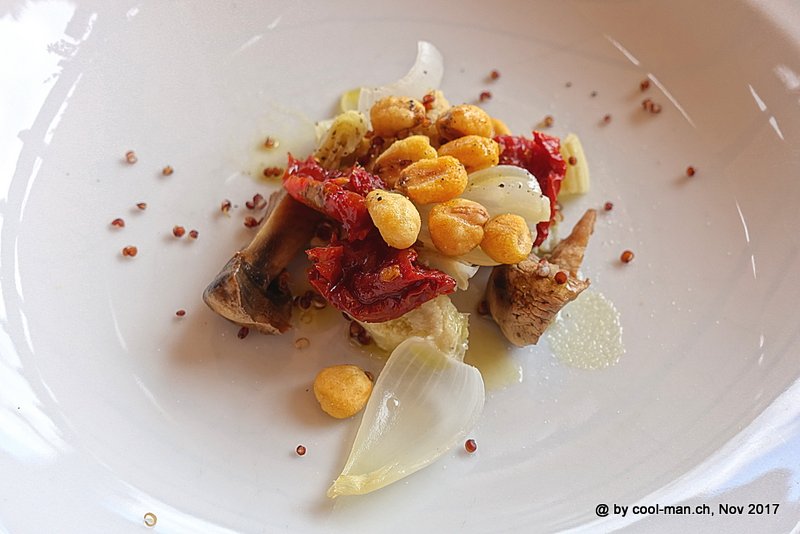 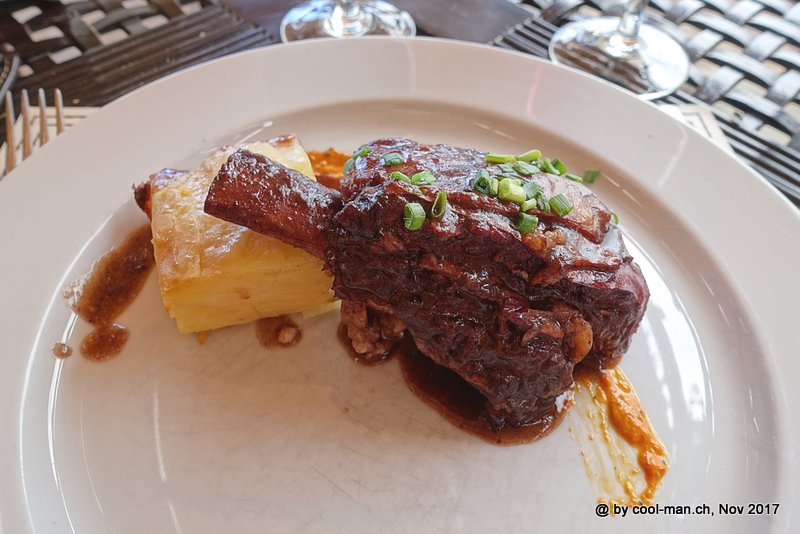 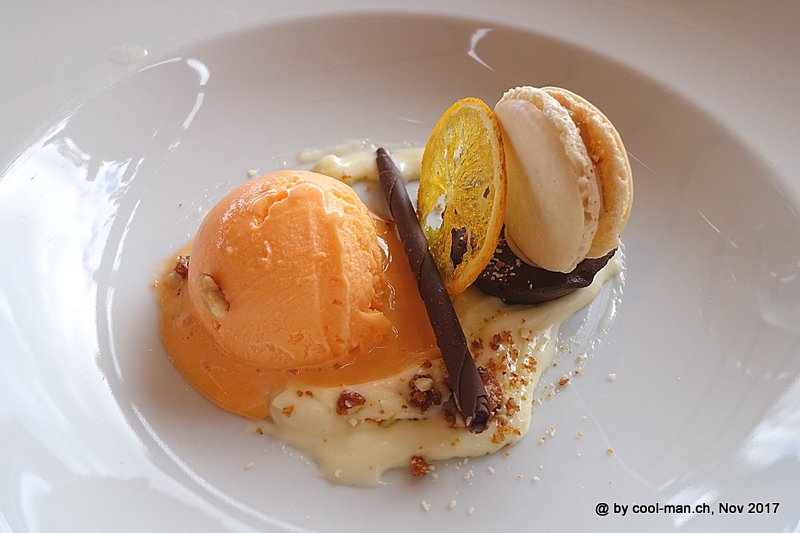 Two years ago I hiked mainly in the area around Ruta 68, which leads from Cafayate northwards to Salta. As the travelogue from 2015 shows, the red rock formations are spectacular.

Ruta 40 around the village Angastaco

On my last visit I drove on the Ruta 40 from Cachi to Cafayate, one of the dream roads of the world. Since I had to cover the distance in one day, there was only time for a few snapshots. And I was also unable to visit the nearby Colomé winery with the highest vineyard in the world. This time I focused on the Ruta 40. The route around the village of Angastaco is the most interesting.

That’s why I stayed several nights in this small village and explored this unique beautiful area. Without further commentary I let the pictures speak for themselves. 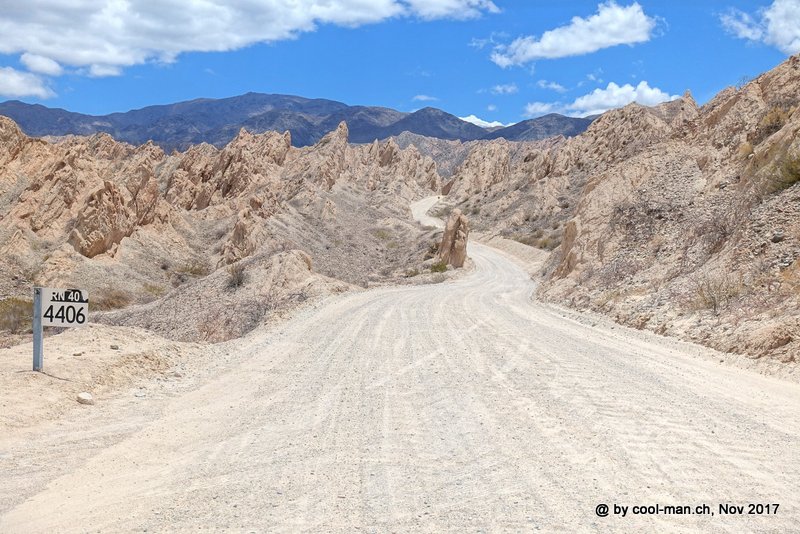 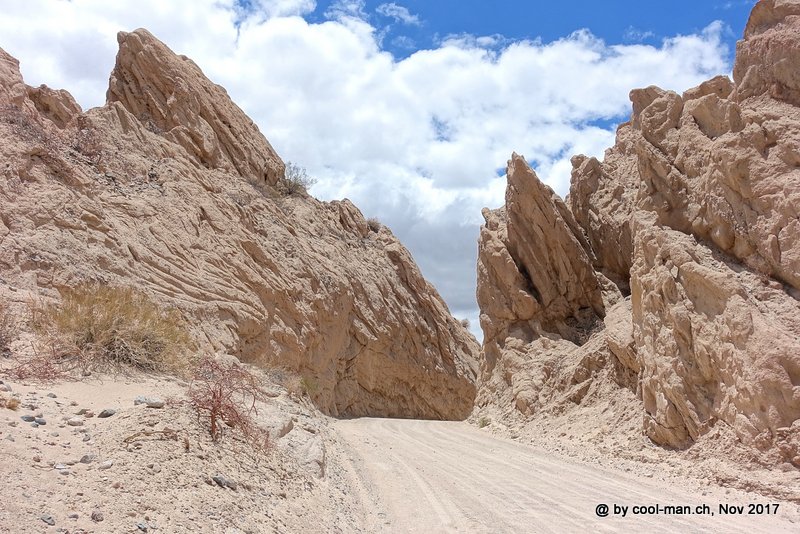 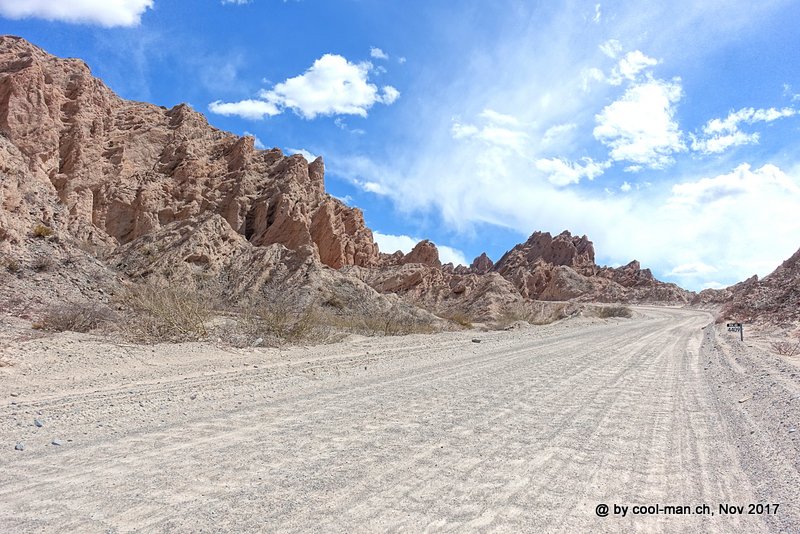 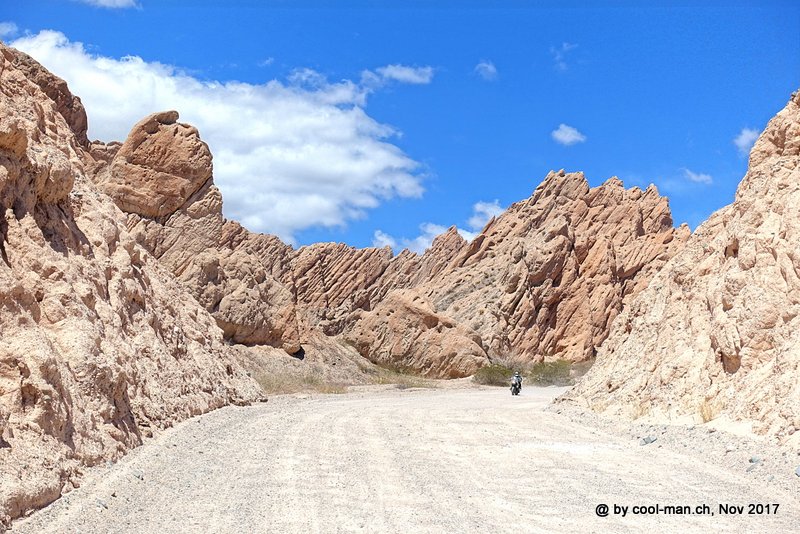 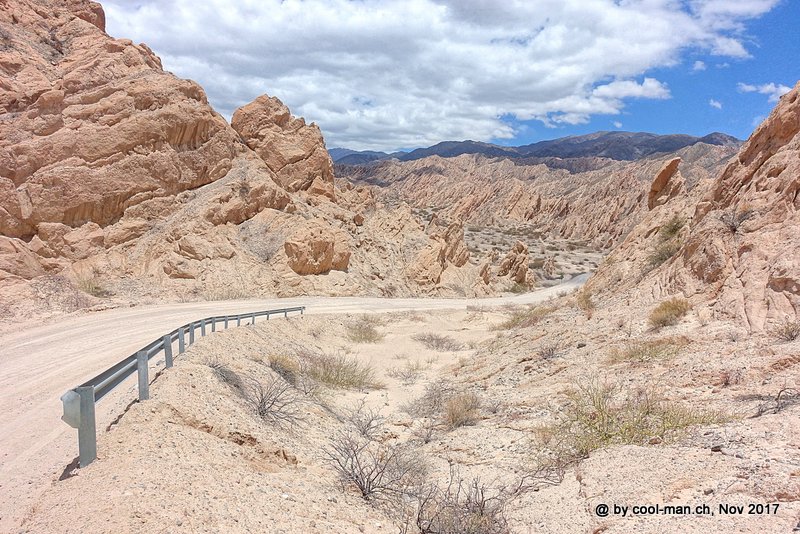 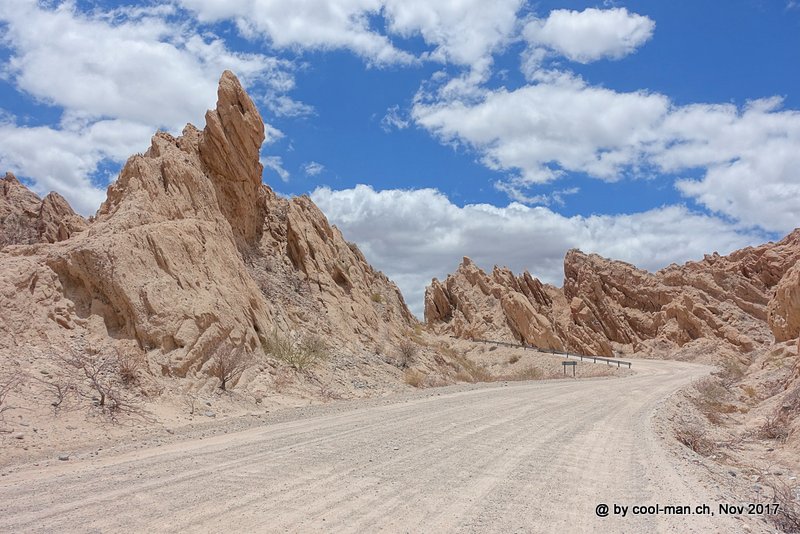 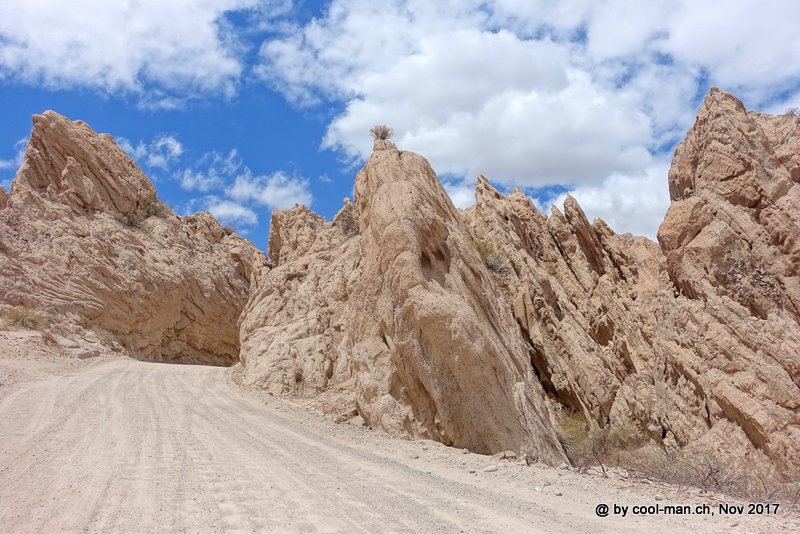 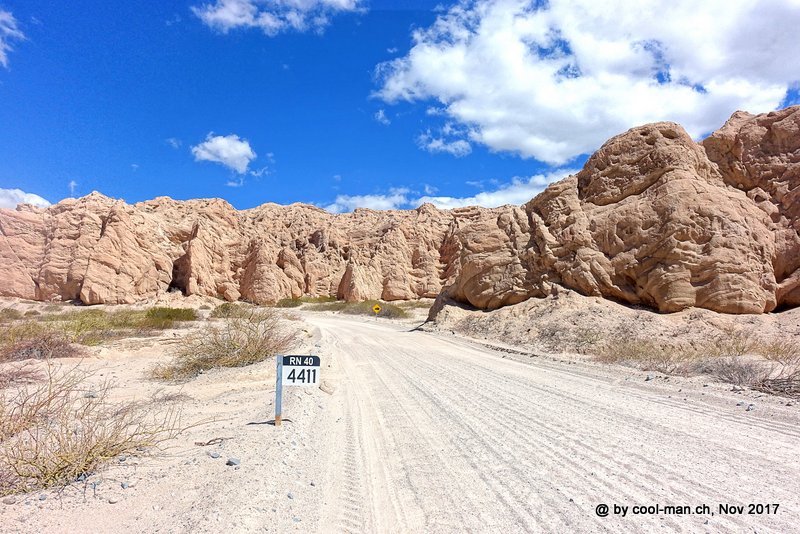 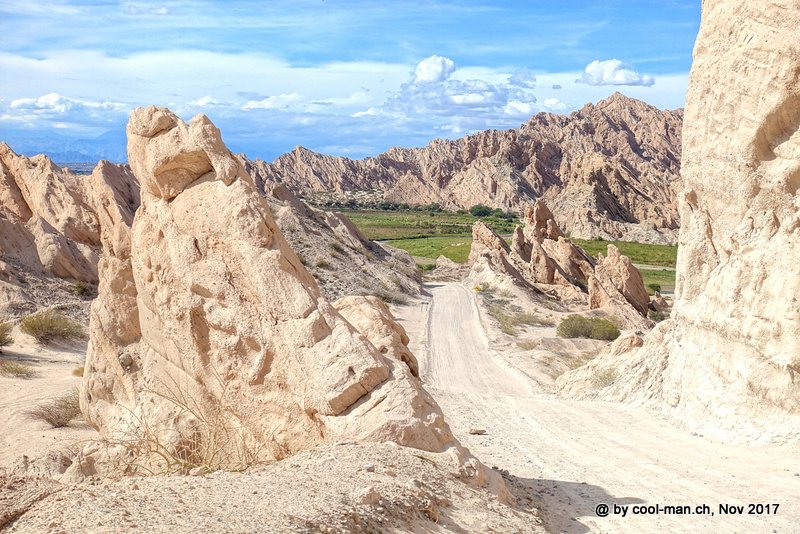 And here are some pictures a little off Ruta 40. 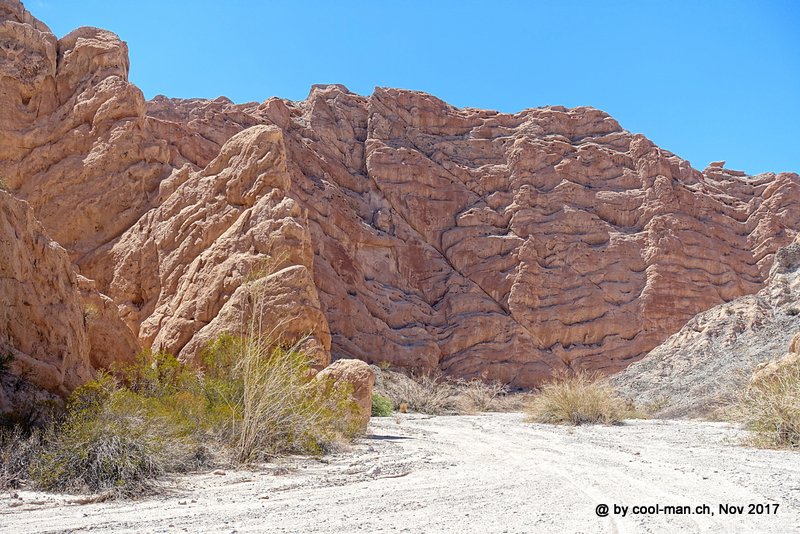 Here are my Cafayate favourites. I was so taken with the Tannat of Domingo Molina that I bought two bottles. Since I am travelling by bus and plane, I could not buy any more bottles. 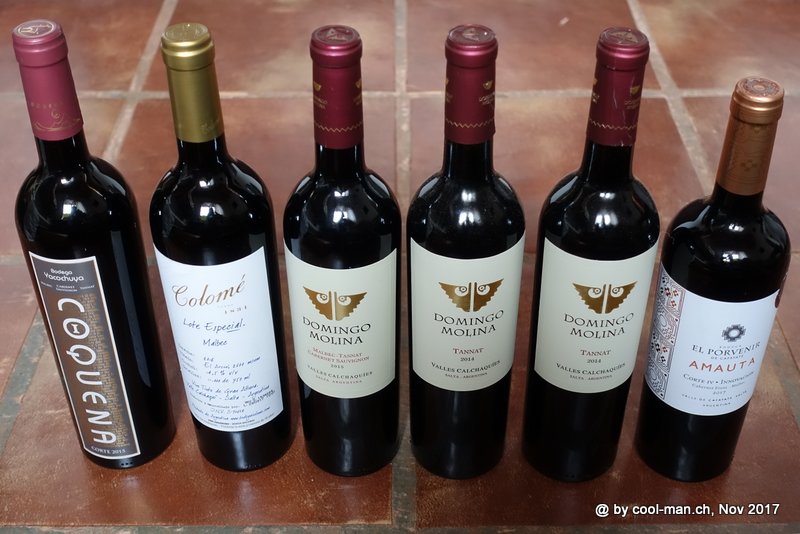 Two years ago, when I drove from Cachi to Cafayate by car, the time was too short to leave the Ruta 40 and drive for another 40 minutes on a gravel road to the Colomé estate with the highest vineyard in the world. This time I didn’t want to miss this visit. Together with a Frenchwoman I rented a car with a driver. After a few hours of winding drive through fantastic landscapes, we reached the Bodega at an altitude of 2,300 meters in time for lunch. As expected, the wines were very rich in tannin, as the grapes had to develop thick skin at this height because of the strong UV rays and the cold nights. I bought a few bottles, but the wine from the highest vineyard at over 3,100 meters, the Altura Máxima, was too expensive for me with about USD 150 per bottle. 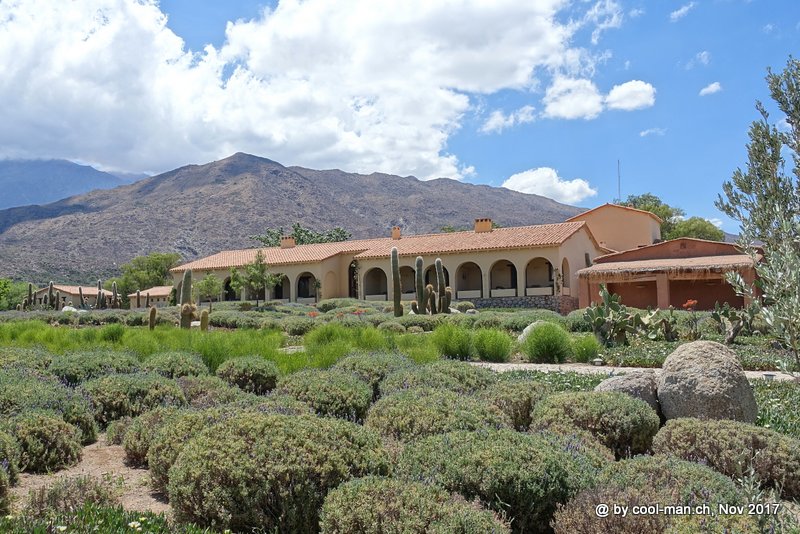 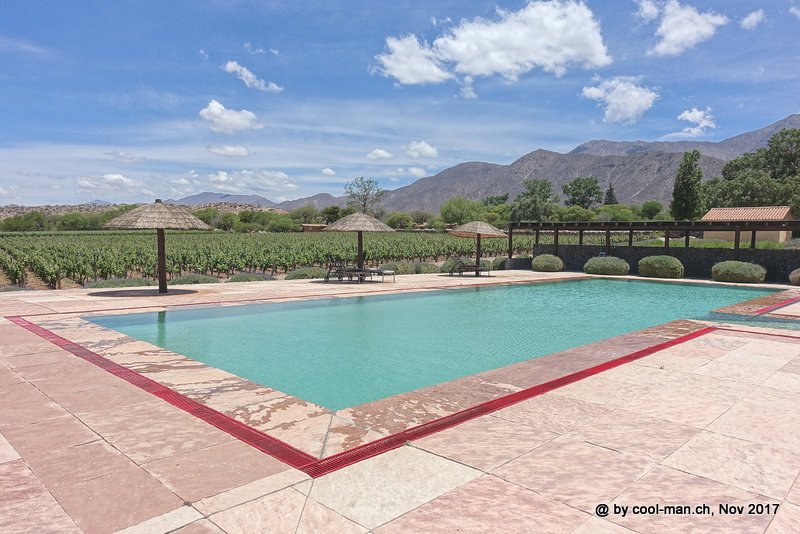 The Swiss owner Donald Hess, who had made his money by selling the Valser-water business, must be a special man, because he not only expanded and modernised the winery in this seclusion, but also created the only museum in the world dedicated exclusively to the American light artist James Turrell. It consists of nine room installations that together consume more electricity than the entire village of Colomé. No wonder, then, that a small river had to be diverted to generate electricity from hydropower. Some generators were also purchased.

On my last trip I remembered the village of Purmamarca because of its colourful landscapes. The village is located on the route from Salta to San Pedro de Atacama in Chile, where I travelled next. It is located at 2,324 meters above sea level. The Andean influences were unmistakable. In the restaurants each music group had a panpipe player and the plant quinoa, which only grows at high altitudes, was found on every menu. The people with their sun-tanned Indio faces clearly distinguished themselves from the people in the city of Salta.

Two years ago I stayed three nights, so I could only explore the areas around the village. Now I had planned six nights, which allowed me to walk much further in the different directions. As the photos show, it is a unique area.

In the foreground the village of Purmamarca by day … 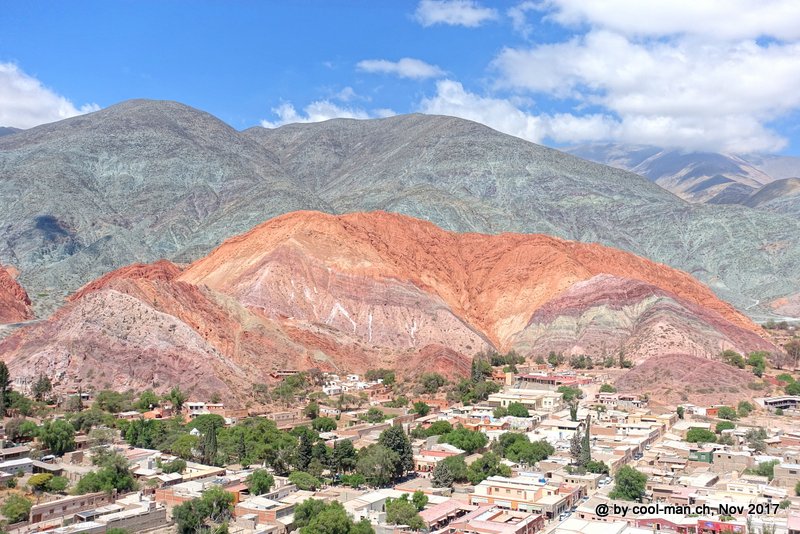 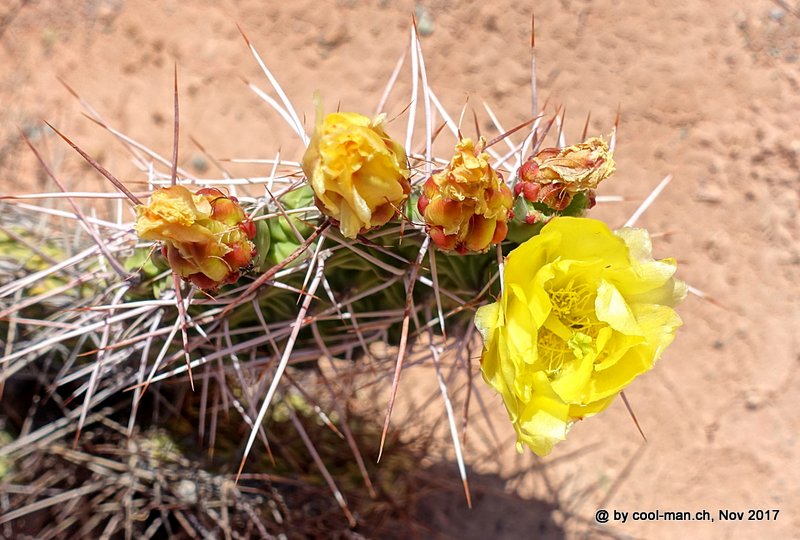 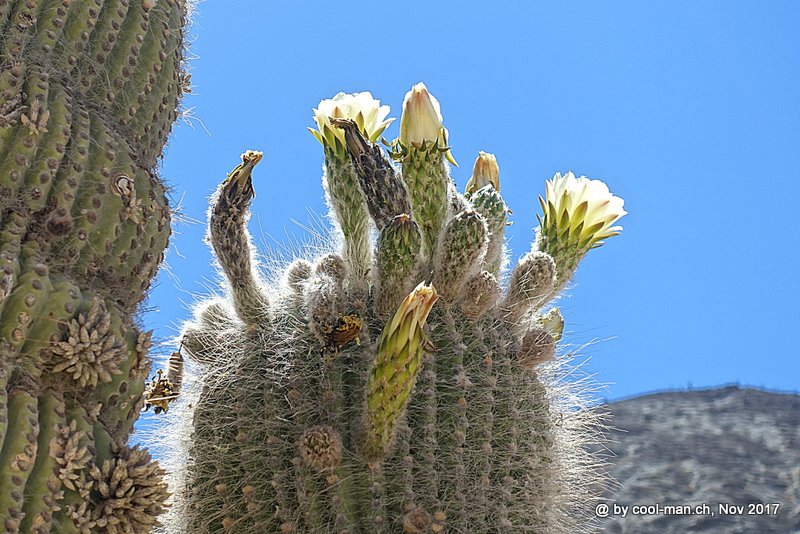 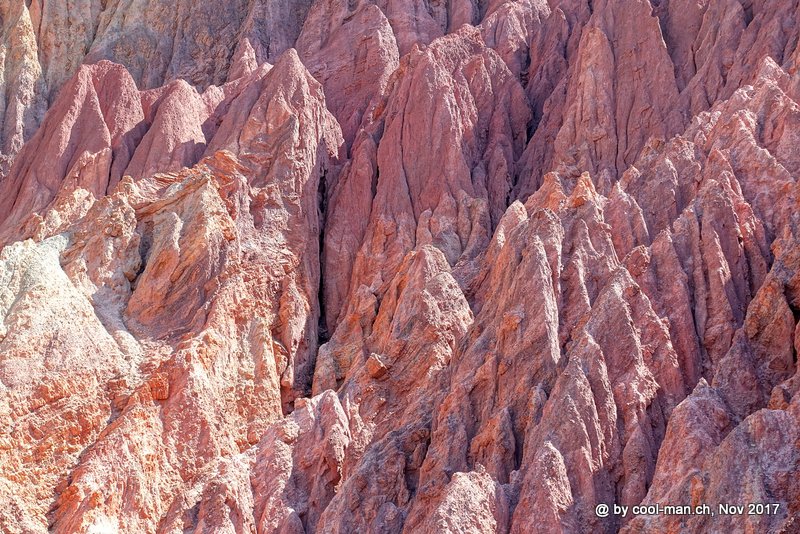 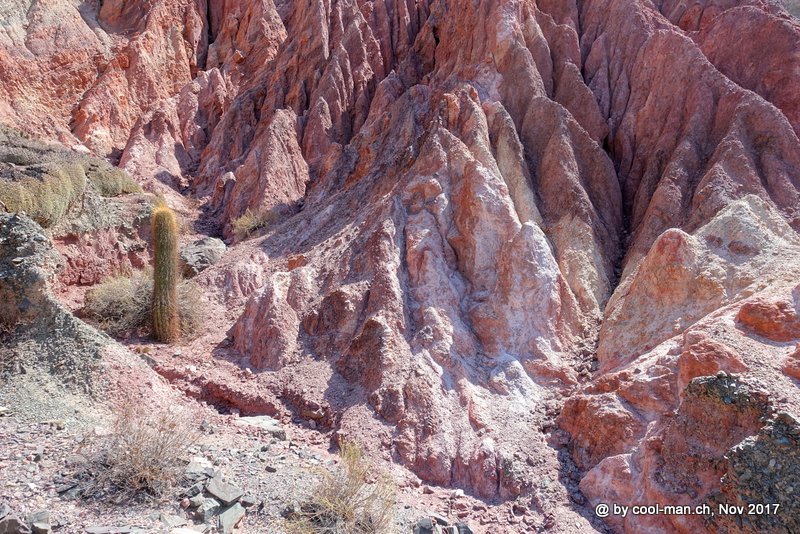 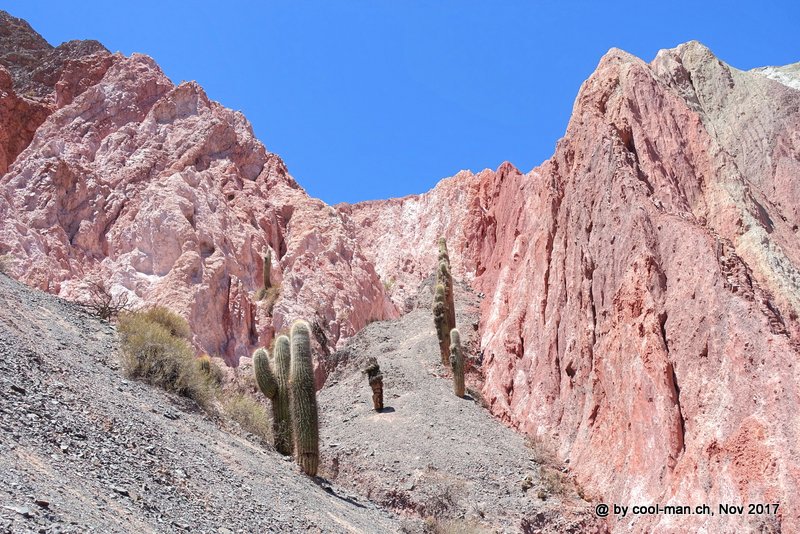 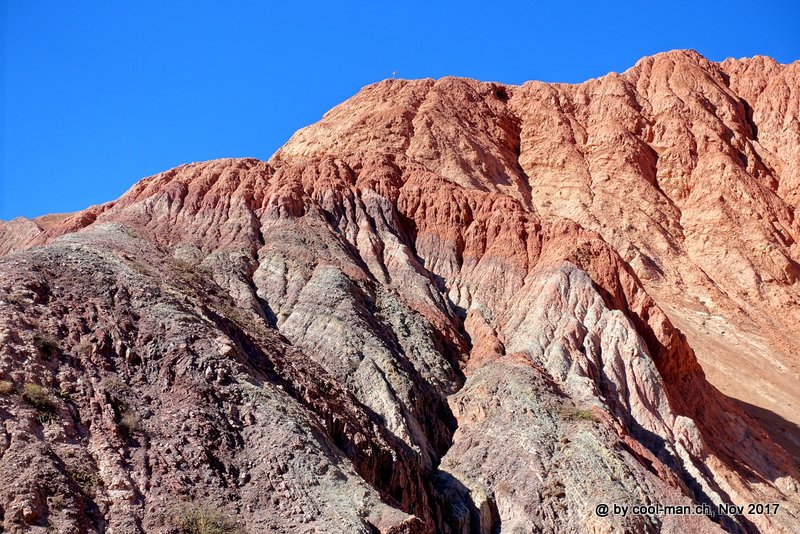 My next destination is Chile. I will travel from San Pedro de Atacama to Puerto Varas in nine weeks. Read more in the Chile travel report.