My journey began stormy. On November 8, 2013 Typhoon Yolanda swept over the Philippines. It was one of the most violent tropical cyclones ever observed. In the Philippines alone, 6,300 people died.

And I was right in the center of it. The eye of the storm passed my hotel with up to 335 km/h. 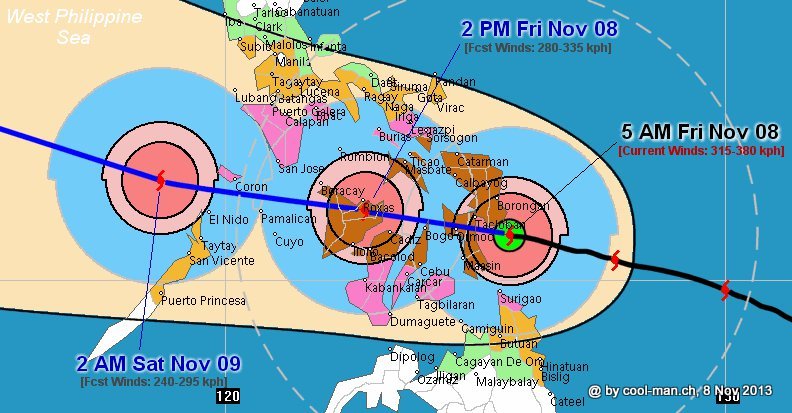 Although the windows of the hotel room were shaking, a crack in the ceiling was getting bigger and bigger and water was flowing into the hotel room by the bucket through the lamp opening in the ceiling, I got off lightly. The situation outside the hotel was quite different. Families with simple huts had to watch how the roof or the whole house was blown away. As a result all their belongings were soaked. The electronic devices such as television were often unusable. Many houses were also damaged by fallen trees. Most of the locals did not prepare for the typhoon at all. Although people were informed about the storm, most of them completely underestimated it. Accordingly, the damage was much higher than it could have been. Nevertheless, in view of the misery it was clear that I was helping wherever I could. 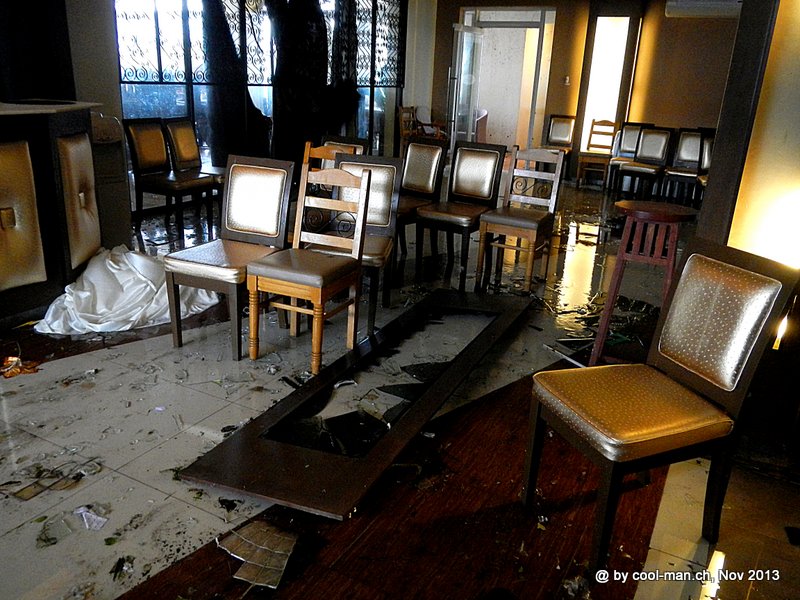 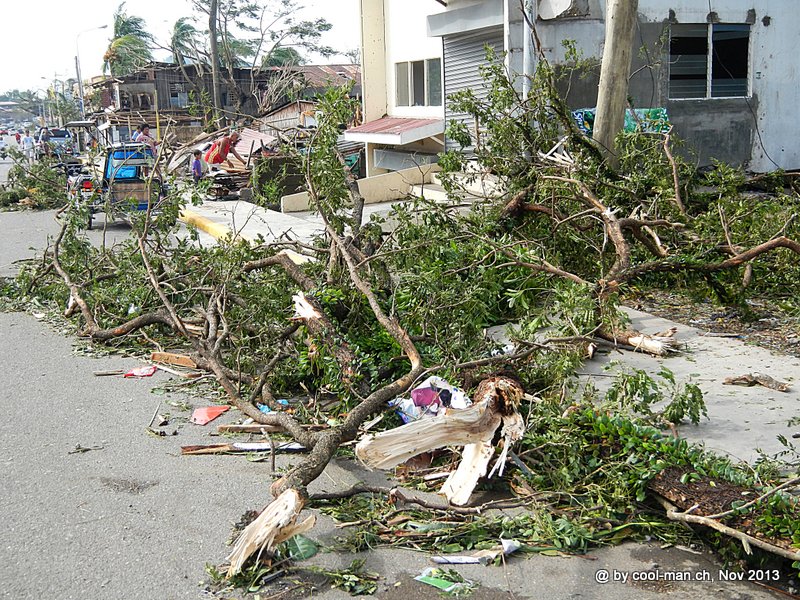 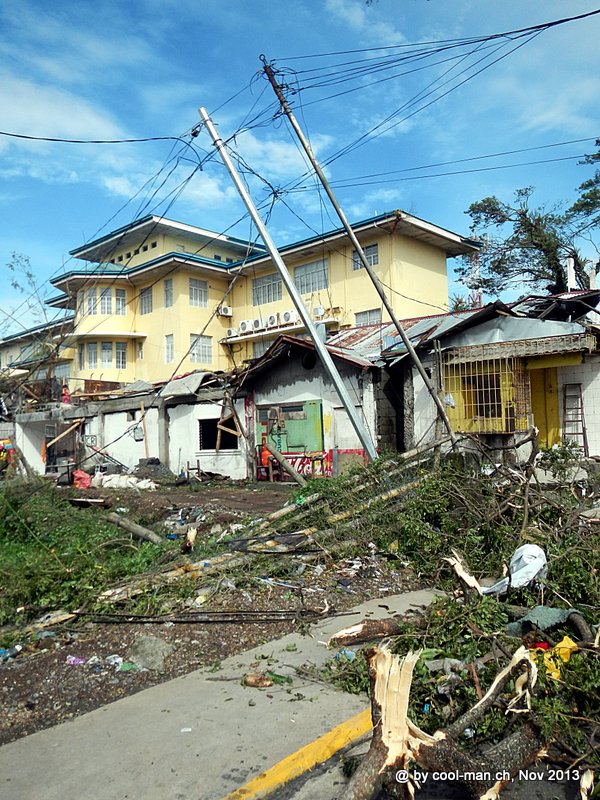 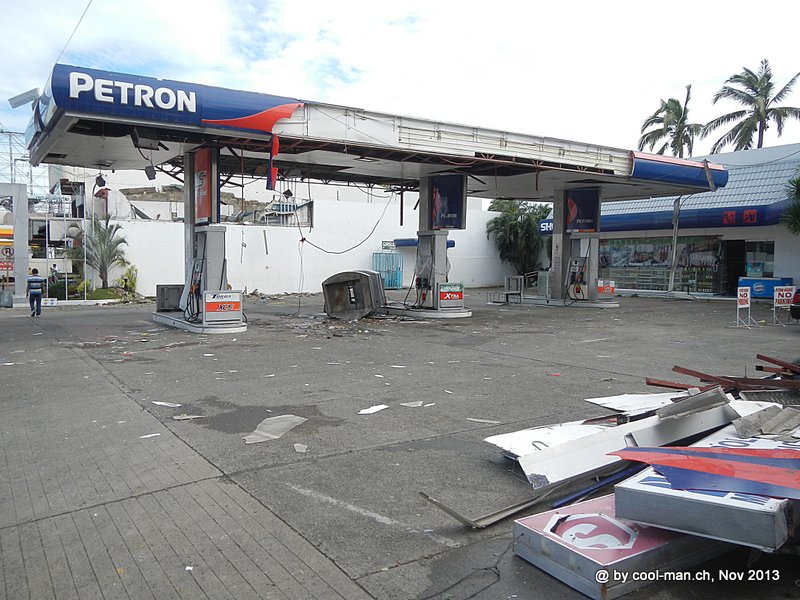 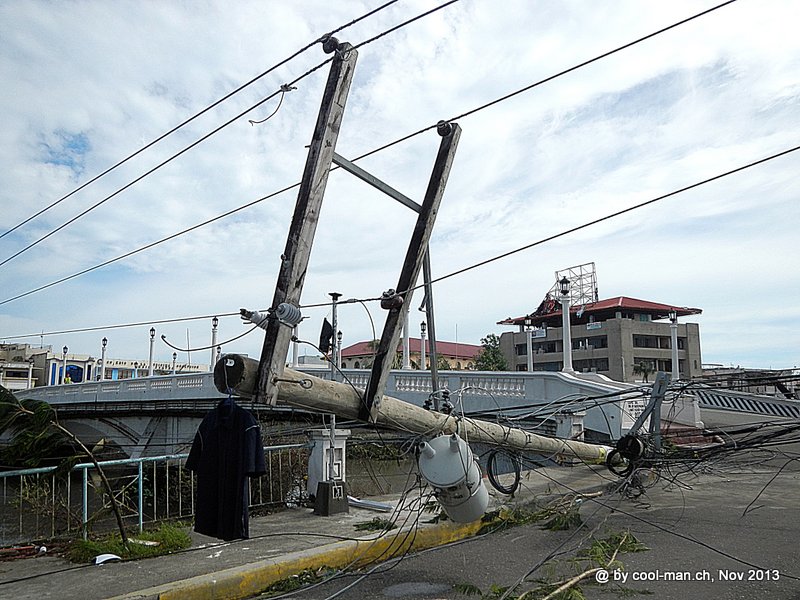 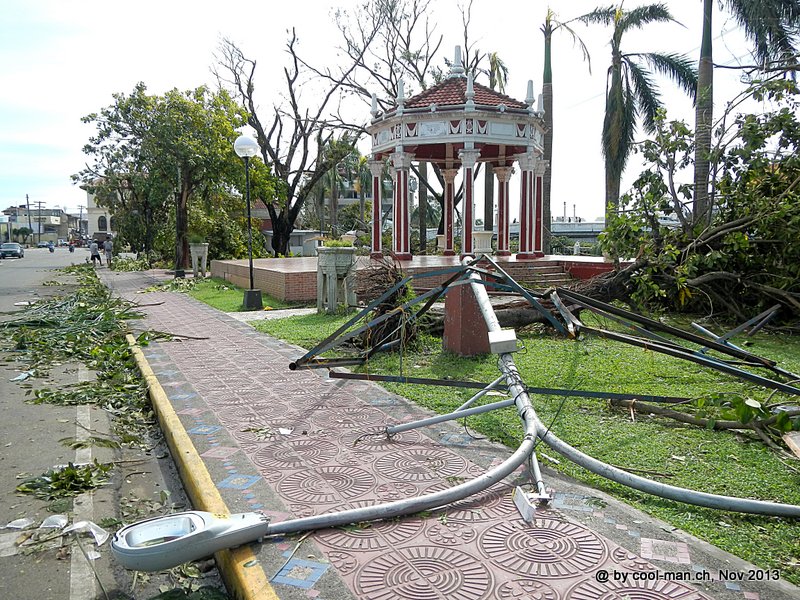 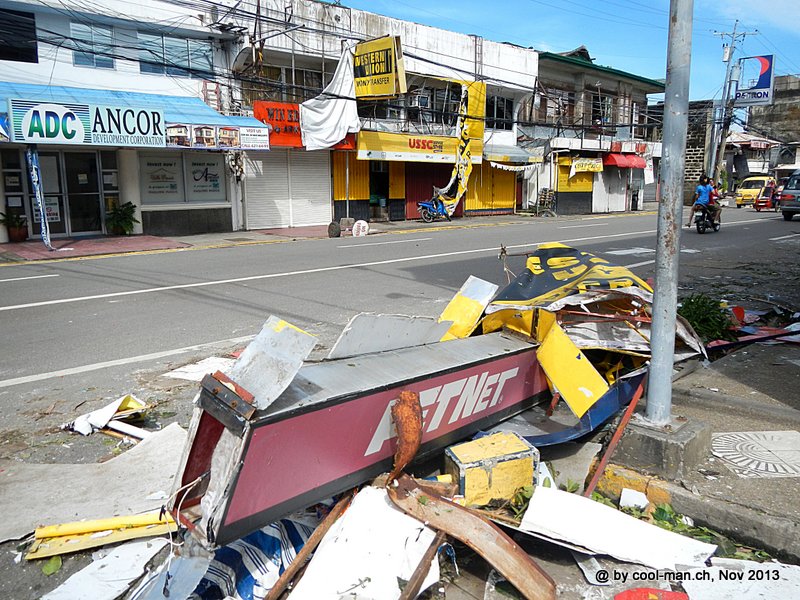 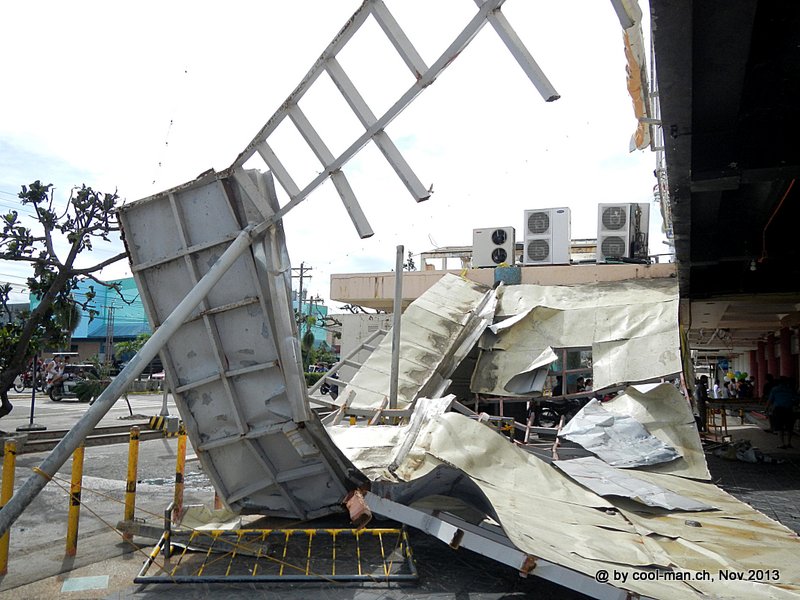 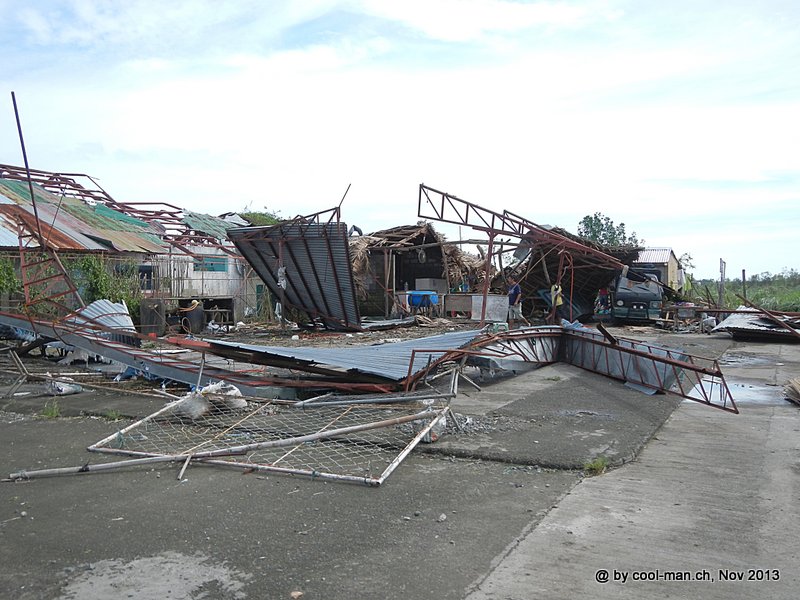 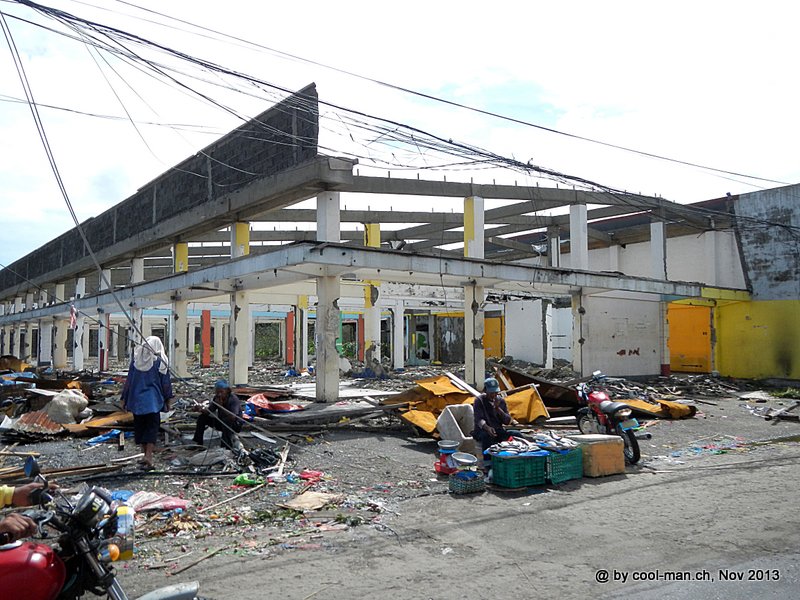 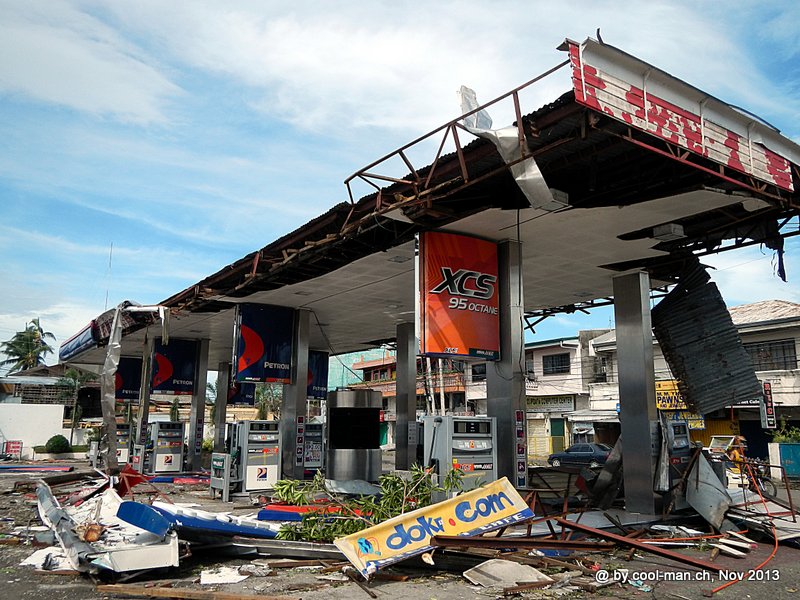 The Western media reported extensively on the disaster. The terrible images persuaded many people and organizations to donate. The aid money was well-intentioned. But if a lot of money is flowing into such a corrupt country as the Philippines, excesses are inevitable.

I could see how the professional aid organizations work. They lived in the most expensive hotel of the village and drove around with their big off-roaders with the tinted windows. The organization “Four paws” distributed animal feed to the perplexed, starving villagers. The animals must also be helped. Another distributed medicine, which finally ended up in the pharmacies where people had to buy the medicine. The global aid industry is going from disaster to disaster and is hardly familiar with local conditions. In addition, media-effective actions are preferred to invisible ones such as counselling.

Parcels after parcels were unloaded at the mayor’s house and stored in the garage. These relief supplies will certainly not be delivered. The politicians standing for the next election distributed money and rice in front of the camera. Their own relatives received maximum amounts, even without major damage. Other people did not receive any money despite large damages. Some expensive western relief goods were replaced by inferior local goods and the expensive goods were sold for good money.

Tacloban, the city that was most affected, is known to have put the Mayor’s stickers on the relief supplies before they were delivered, despite the extreme hardship. So the people did not come to their emergency aid until a few days later, but the re-election of the mayor was assured.

By the way, Tacloban is hit by a catastrophe about every hundred years. The city lies at the end of a natural funnel, so that large tidal waves inevitably flood the city. Two similar tidal waves are historically known. It is not simply fate when the city is later destroyed again and tens of thousands die again.

Westerners also profited from the typhoon. Last year I sailed with an American through the Philippine island world. He was short of cash and his wife was pregnant. My payment for the sailing trip was very welcome. Later I heard that the family had to move into a small house a little off the beaten track because they could no longer afford the central store. A few days after the typhoon I received an email from the American describing the need around him and asking for help. One should pay the money into his private account. When I came by this March, he had a new boat, a new, nicer house, and a bigger shop in a central location. Here it is at least clear where the well-intentioned aid money has gone. 😉

Many destinations in the Philippines were indirectly affected by the typhoon, as the mostly destroyed island of Leyte supplies other islands with electricity. Some villages had to live without electricity for more than two months. Under these circumstances I did not want to travel around the country. There came a promo offer of the airline AirAsia to Nepal just right. A few days later I landed in Kathmandu.