Dubai is a city with countless superlatives: The tallest building in the world is the Burj Khalifa at 2,717 ft. The highest restaurant is located on the 122nd floor of Burj Khalifa (1,447 ft above ground level). The highest hotel is the JW Marriott Marquis Hotel, which comprises two towers with 77 floors each. The world’s largest shopping center is the Dubai Mall, which extends over more than 12,100,000 sq ft. It contains the world’s largest aquarium pane. In the Mall of the Emirates is the largest snow area in a building. Dubai also holds many other records.

After three days in Doha, Qatar I traveled on to Dubai. From a small trading village at the beginning of last century, Dubai has grown into a huge city with countless high-rise buildings, luxury hotels and shopping centers.

The first three days I went to the historical center and dealt with the history of the city. A hundred years ago, people in Dubai and the surrounding desert were poor. Most of them roamed the desert as Bedouins with a few camels and goats. Dubai was built on a 14 km long sea inlet called Creek. The then emir lived in a simple house without any luxury made of shell limestone. The Great Mosque was a one-storey, cracked mud house.

The older houses have wind towers that capture air movements and direct them into the house. As it can get over 120 degrees Fahrenheit in summer, any kind of cooling is welcome.

It was actively traded with trading partners from North Africa to India. As in the past, the goods continue to be loaded from the ships with simple aids and a great deal of human strength.

Another profitable business was the pearl diving, not so much for the divers but for the pearl dealers who pre-financed the ship and all the equipment. But also the divers had the prospect of the big draw, because an extraordinary pearl was worth as much as the salary he could otherwise earn in his whole life.

Due to the high demand for pearls, more and more Bedouins settled in Dubai and Abu Dhabi all year round or during the pearl season from May to September, which contributed to the further growth of these places.

The pearl industry was hit hard in the 1930s, partly because of the worldwide depression, and partly because the Japanese had discovered pearl farming. After all, Dubai was less affected than the rest of the region, as Dubai had a more diversified economy as a trading center. The then emir abolished customs duties in 1916 in order to intensify trade and attract traders, which he succeeded in doing. Nevertheless, the economy did not recover until the discovery of oil in the 1960s.

Dubai is a melting pot of people from Africa, the Middle East and the Indian subcontinent and so you can also find spices and food with the associated smells from all these countries. Heavenly! I enjoyed food from a different country every day. The Arabs love their food and you can see that in the bodies of both men and women.

Although these immigrants are often Muslim, I had no problems at all with them. On the contrary, everyone was very friendly and open-minded. I was often approached with Boss.

Of course I visited the Burj Khalifa, the world’s tallest building at 2,717 ft. It’s impressive! It pierces the sky like a needle. From the viewing platform on the 124th floor, which can be reached by a direct elevator, you can look down to the other high-rise buildings. 500,000 tons of material were used and 12,000 workers worked on it at the same time at the peak. The building was supposed to be called Burj Dubai, but after the generous emergency financial aid of no less than 10 billion dollars from Abu Dhabi a month before the opening of the building, it was named after its ruler Sheikh Khalifa bin Zayed al-Nahyan. As a result, all the souvenir items with the imprint “Burj Dubai” had to be stamped and signs in public spaces had to be replaced at short notice. How did the proud emir of Dubai feel about it? According to this sign at the entrance to the building, he won’t get down. 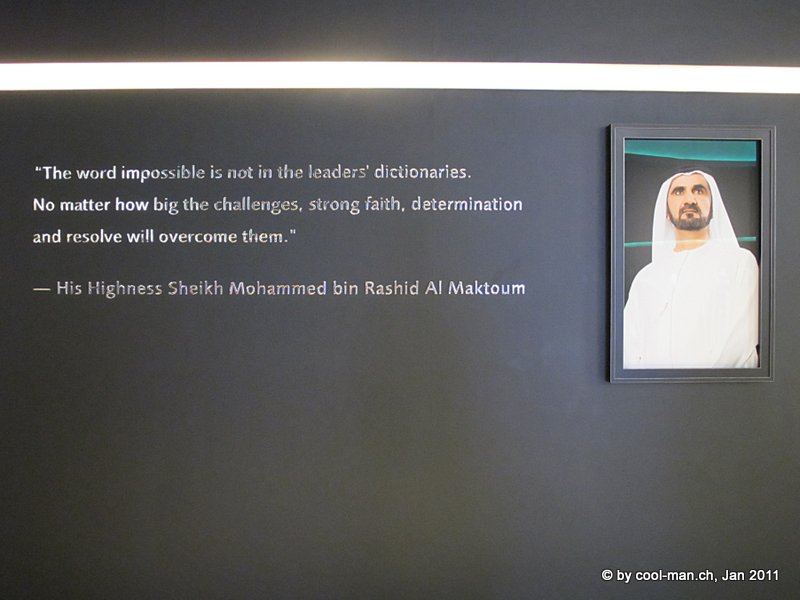 A quite wide river flows past the building, which is spectacular when you know that there is actually no water in the desert. At the foot of the building, a district with many restaurants and bars has developed. Every hour in the evening, a top-choreographed water fountain show takes place at the artificial lake in front of it, which has become an attraction in itself. I spent several evenings in this area. 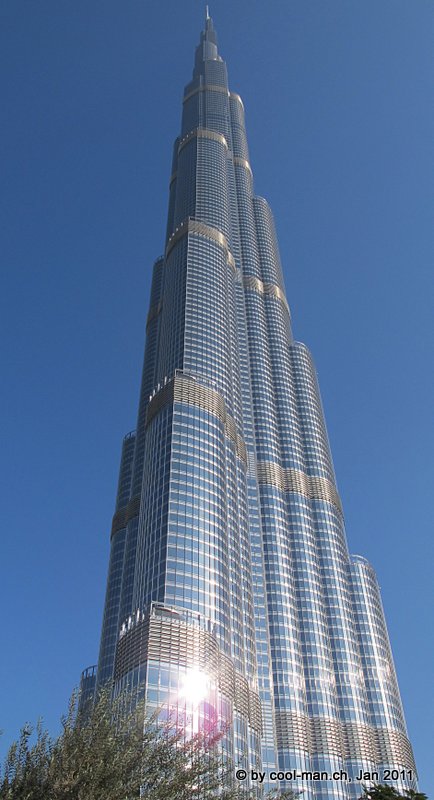 The view from the observation deck on the 124th floor

I also visited the landfill in the shape of a palm tree. At the top of the palm tree stands the huge Hotel Atlantis, which was built on the model of the Hotel Atlantis in the Bahamas. Of course a giant aquarium should not be missing in it.

Mall of the Emirates

I saw the famous ski slope with chair lift and snowman in the “Mall of the Emirates” shopping center. 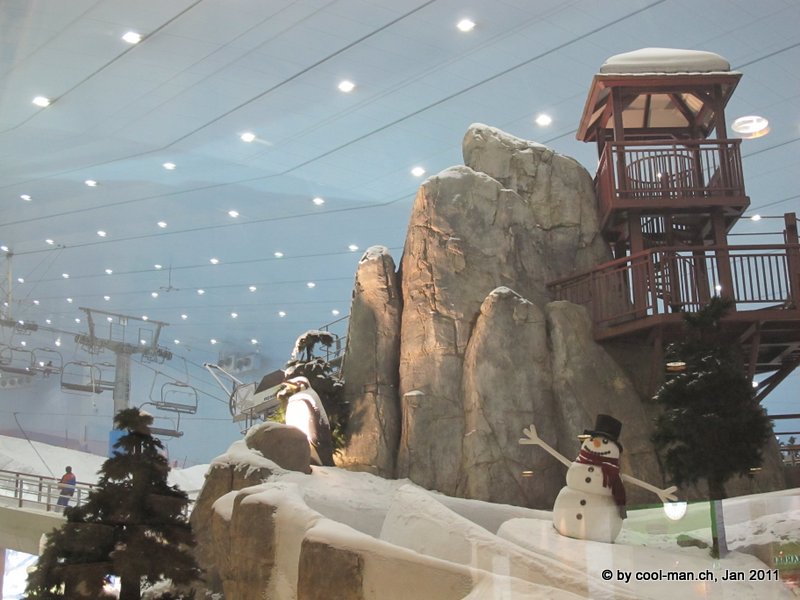 The world’s largest aquarium panel at 32.88 meters is in the Dubai Mall shopping center. Whole shoals of fish, rays and even full-grown sharks swim in this water tank. 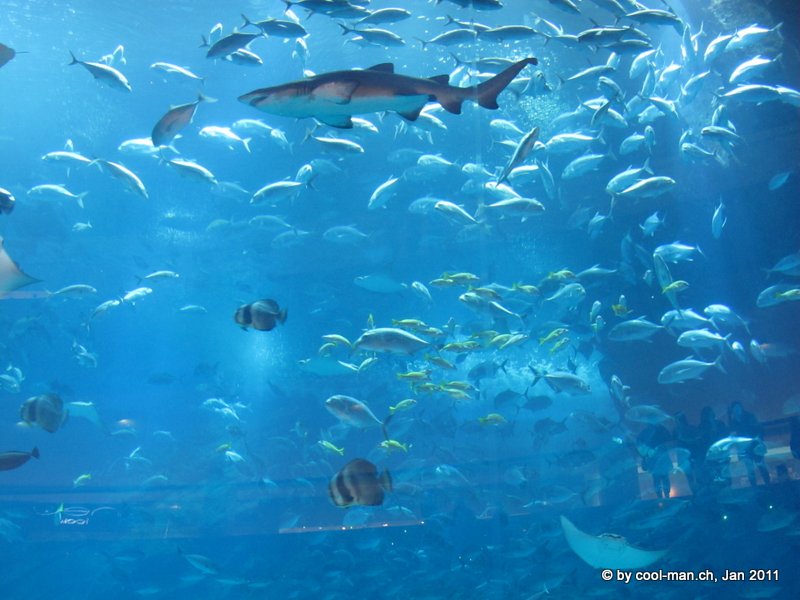 In contrast, the ice skating rink and the 2,800-seat cinema complex appear unspectacular.

In the Dubai Mall

Another highlight was the visit to the Hotel Burj Al Arab with its unmistakable sail shape. Some call it the only 7-star hotel. From the Jumeirah Beach Hotel and Madina Beach Hotel you have an impressive view of this extraordinary hotel.

The view from Madinat Jumeirah 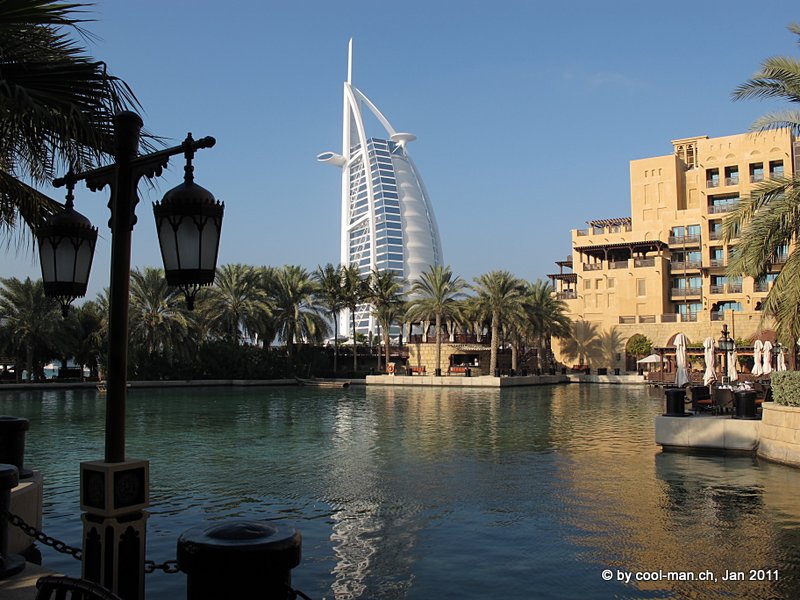 Of course I wanted to see the hotel from the inside. Therefore you had to show a reservation for a bar or a restaurant. I chose the main restaurant, the Al Muntaha on the 27th floor. The next day I was received there for lunch. 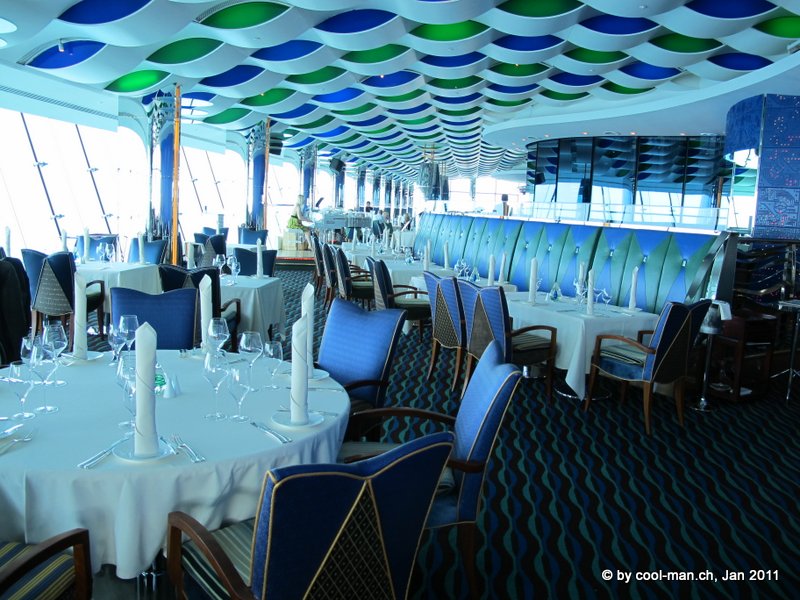 Of course, everything including the prices was at the highest level, even if the creativity of the top restaurants in Europe was not achieved. From the restaurant you could see the Jumeirah Beach Hotel on one side 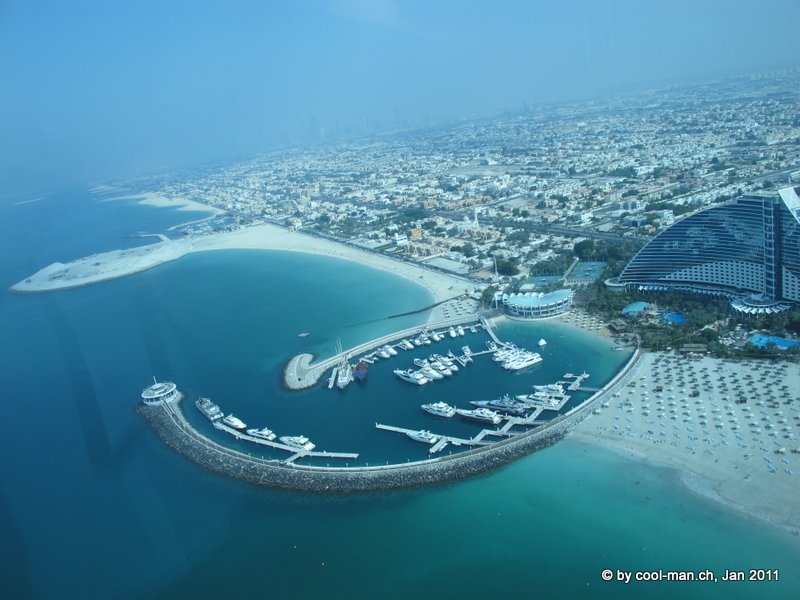 … and overlook the palm islands with the Hotel Atlantis on the other side.

I looked around the hotel after lunch. 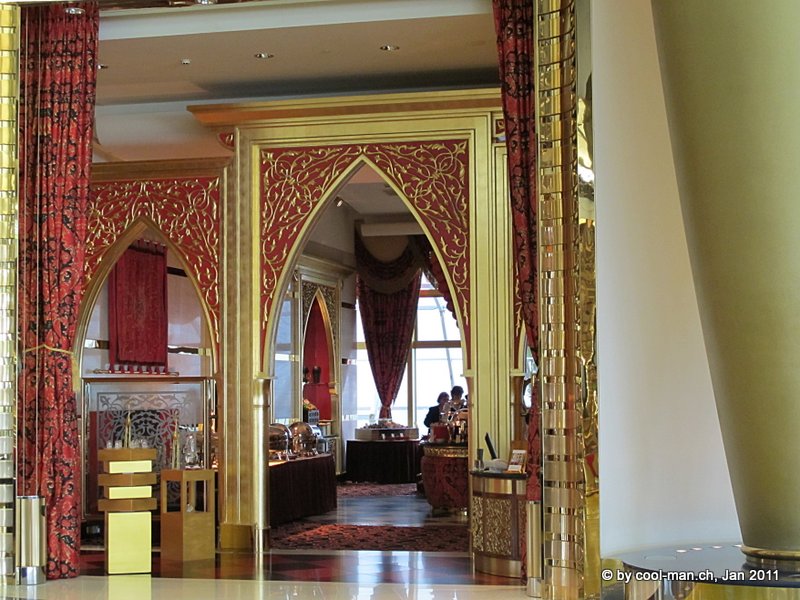 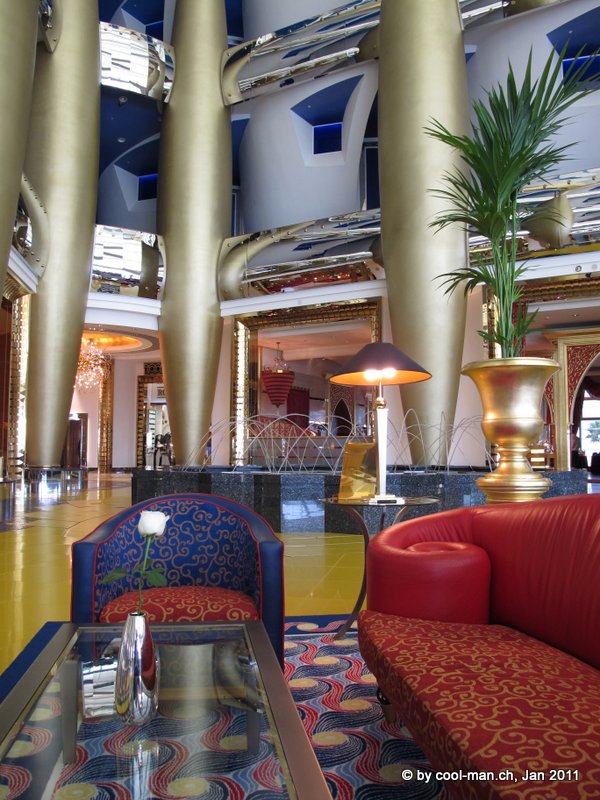 The lobby of the Burj Al Arab

On the left the Jumeirah Beach Hotel

View from Jumeirah Beach Hotel to the marina 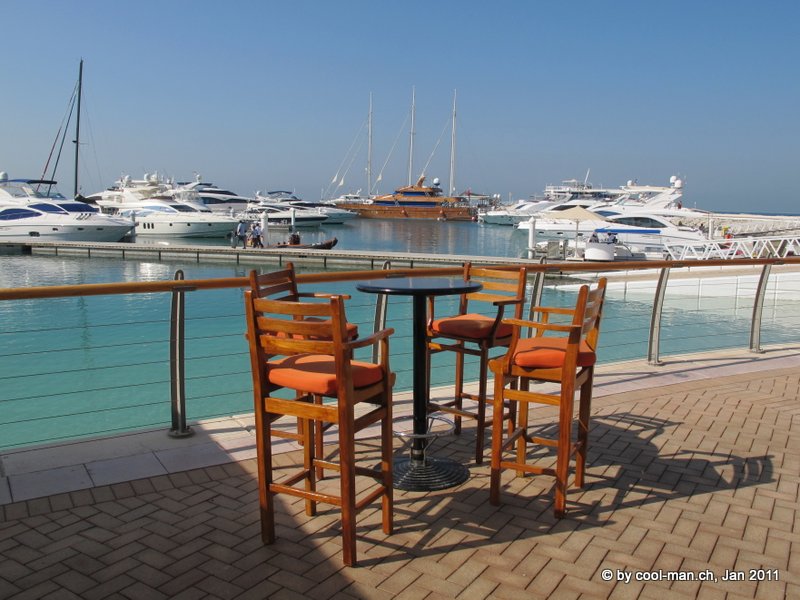 All in all I liked Dubai very much. It is definitely worth a visit!

Afterwards I flew on to Vietnam.

Coming from Indonesia, during this trip to Dubai I wanted to visit the world’s highest restaurant The At.mosphere in the world’s tallest building, the Burj Khalifa. When I last visited Dubai five years ago, the restaurant was not yet open. I also took care of the Uzbekistan visa.

Thanks to the large Indian population I could find my beloved Indian sweets here. One day I wore a T-shirt with the Boracay logo without thinking about it. Boracay is one of the main tourist destinations in the Philippines. All day I was approached again and again by pinoys, that’s what the Philippinos and -as call themselves. I realized how many pinoys work here.

In 2011, after the financial crisis, hardly any construction took place. Now a few real estate projects are under construction again, but Dubai has hardly changed in the last five years.

View from The At.mosphere, the highest restaurant in the world on the 122nd floor 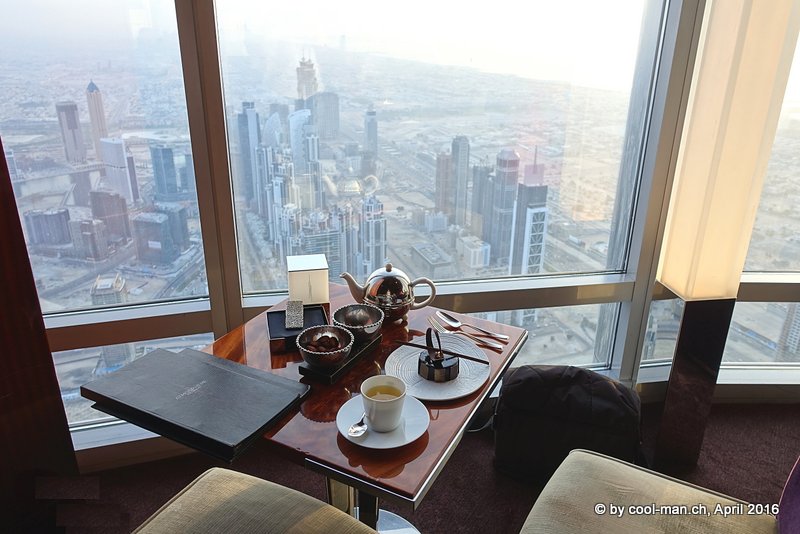 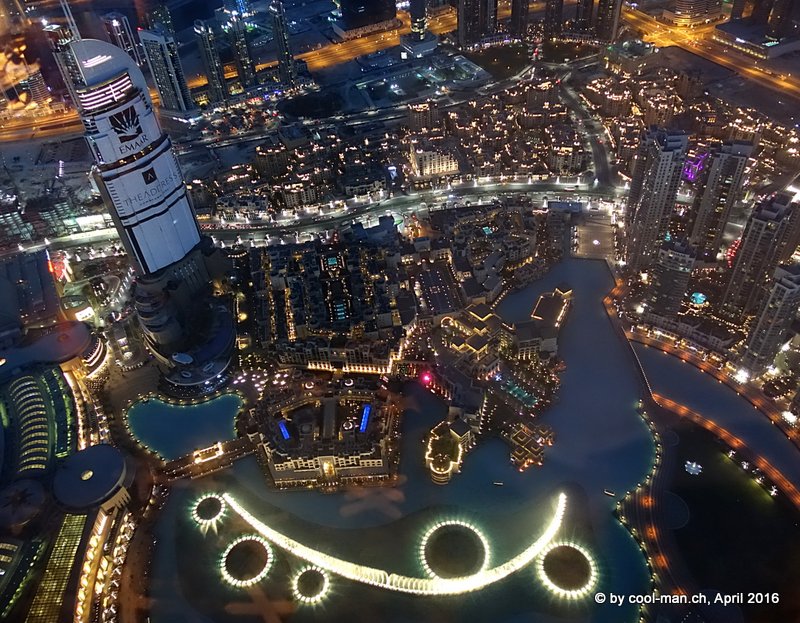 The lake at Burj Khalifa 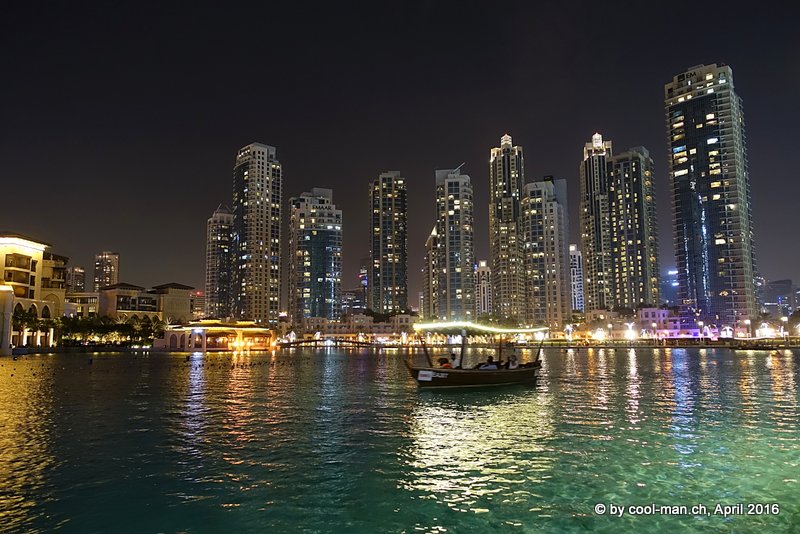 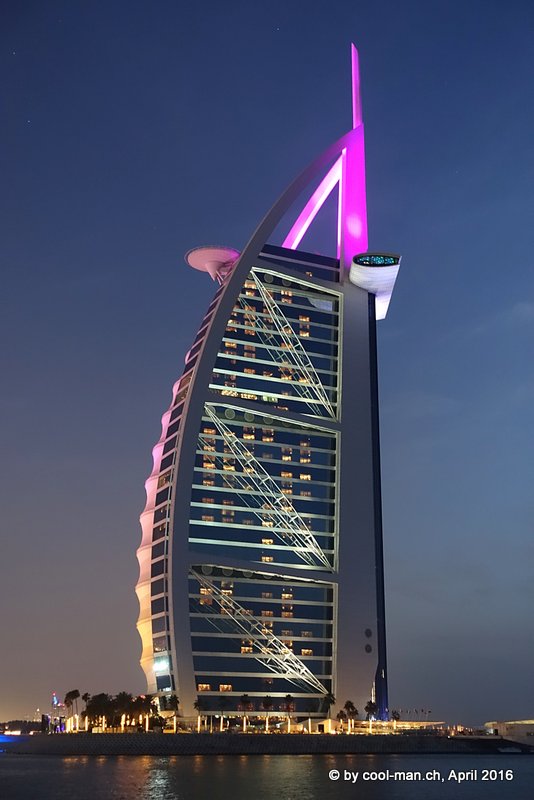 Afterwards I traveled on to Kyrgyzstan.

Actually, Dubai wasn’t on my itinerary. Since there are no direct flights from Colombo to Tehran, I had to transfer somewhere. Dubai is a fascinating city and so I decided to make a four-day stop in Dubai. I always stay at the Radisson Blu Creek Hotel, which is located near the old town and an underground station. Where else can you enjoy 5-star luxury for USD 100 including a varied breakfast buffet? 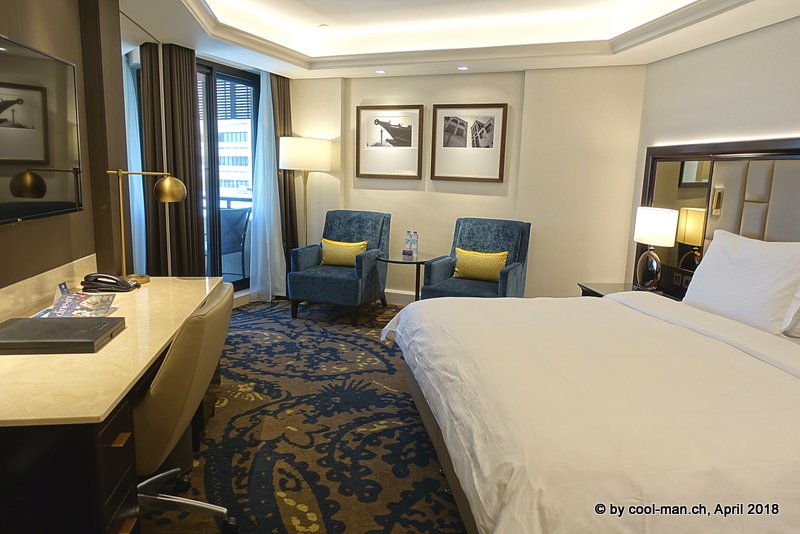 As we are in the United Arab Emirates, camel milk is also a part of the breakfast buffet. It tastes salty and fermented and was no pleasure for me. I loved the four different types of dates. Compared to previous years the sushi offer has been discontinued.

I saw these pepper and salt shakers in a cafe. 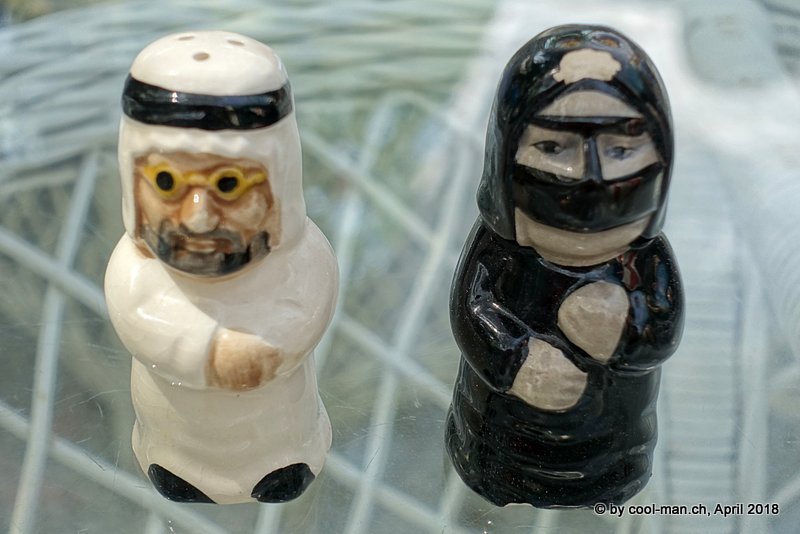 A new light show has been installed since my last visit. 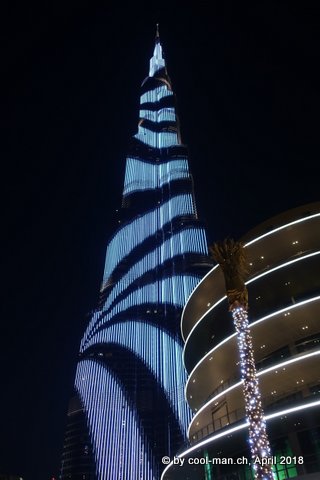 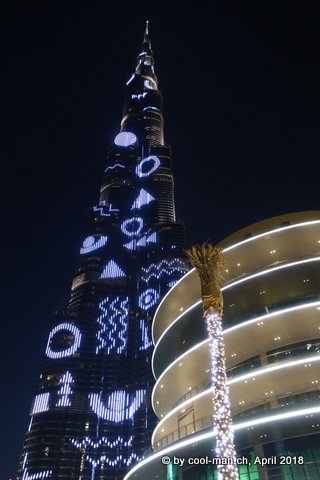 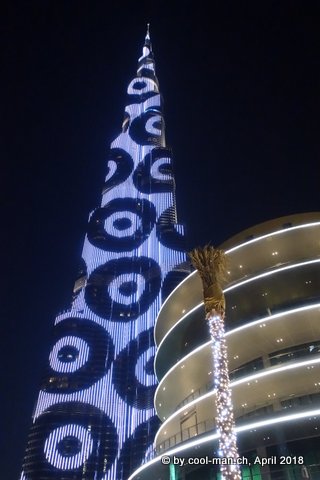 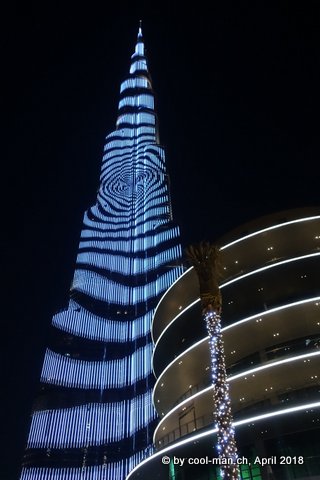 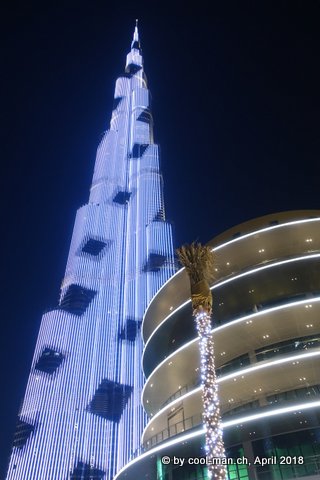 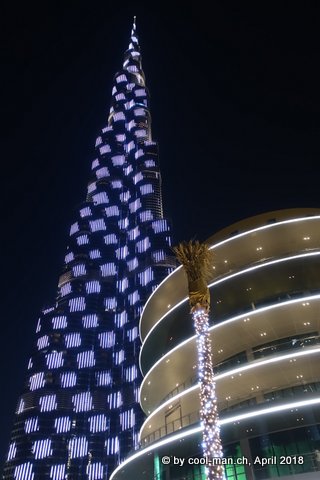 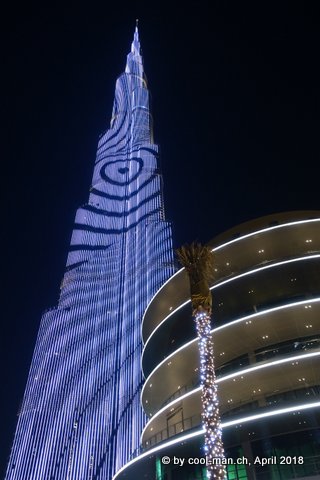 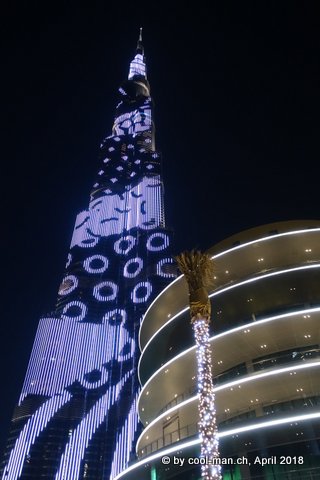 No alcohol is served in all the restaurants around the Burj Khalifa. Actually, I wanted a juicy steak, but red wine is just part of it. I went somewhere else to eat.

The Jumeirah Mosque is the only mosque that non-Muslims are allowed to enter in Dubai. As part of this visit, the Sheikh Mohammed Centre for Cultural Understanding offers tours to introduce visitors to the culture of the Emirates and Islam. The views on the position of women in Islam during the subsequent round of questions were interesting. 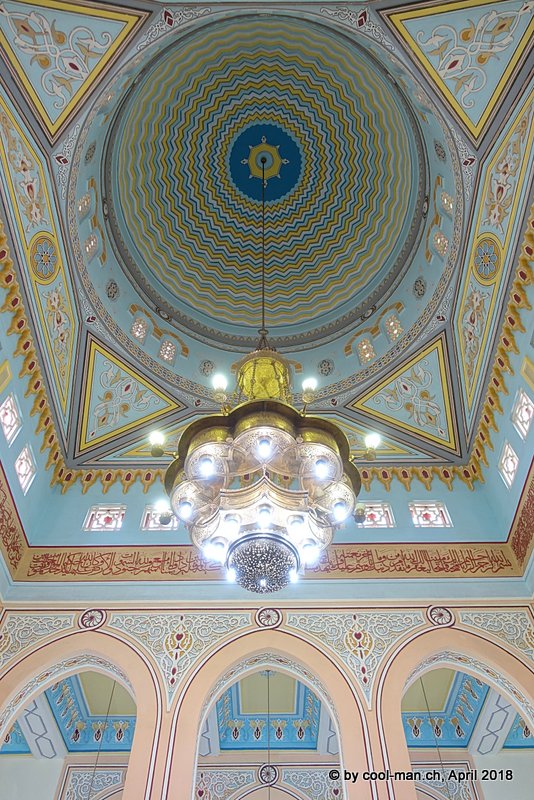 A visit to the nightlife district Madinat Jumeirah with its artificial water expanses could not be missed. The view of the Burj Al Arab Hotel is part of the attractiveness of this area. 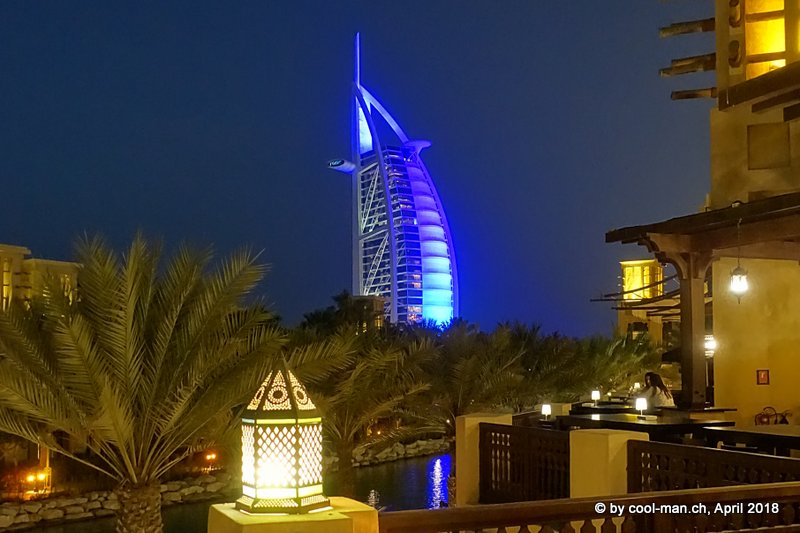 The highlight of my trip to Dubai this year was a visit to the Al Grissino restaurant on the 16th floor of the Emirates Financial Towers, which offers a spectacular view of the Burj Khalifa. 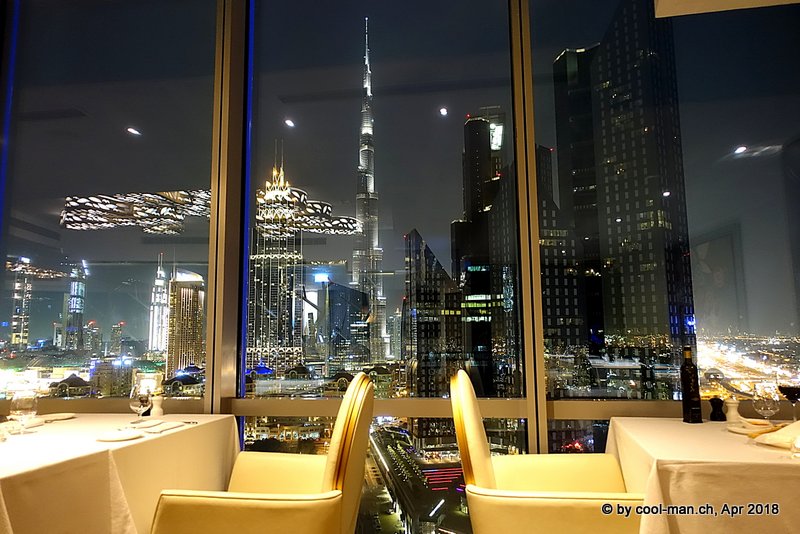 The food was perfect, too. The wine offered in the glass was a Montes from the Colchagua valley in Chile. The cheerful African waiter with his avant-garde hairstyle was impressed when I showed him the pictures of the Montes Winery, which I had visited in December 2017. This time, no salad sauce interfered with the enjoyment of the wine. Now I know that the Montes Winery also produces excellent wines. Here in Dubai a glass costs almost as much as the whole bottle in Chile.

After four days in this unique city I traveled on to Iran, where I had to forgo alcohol for the next month.