Then I flew to Lima, where I visited the third best restaurant in South America, Astrid y Gaston the following day. In my opinion this restaurant is overvalued and overpriced. Although the food was at a high level, it was still quite traditional. The wow effect was largely absent. The wine selection for the menu was international, but not in the absolute top segment. I don’t visit a Peruvian restaurant, for example to taste a German Riesling Spätlese, when there are so many top wines in South America.

A safe value in Lima is the Locanda Restaurant in the Swissôtel. It is not an absolute top restaurant, but as the photos show, this restaurant offers a traditional cuisine on a high level. Moreover, as a hotel restaurant, it is also open on Sunday evenings when the other top restaurants are closed.

Trilogy of lobster, tuna and mushrooms 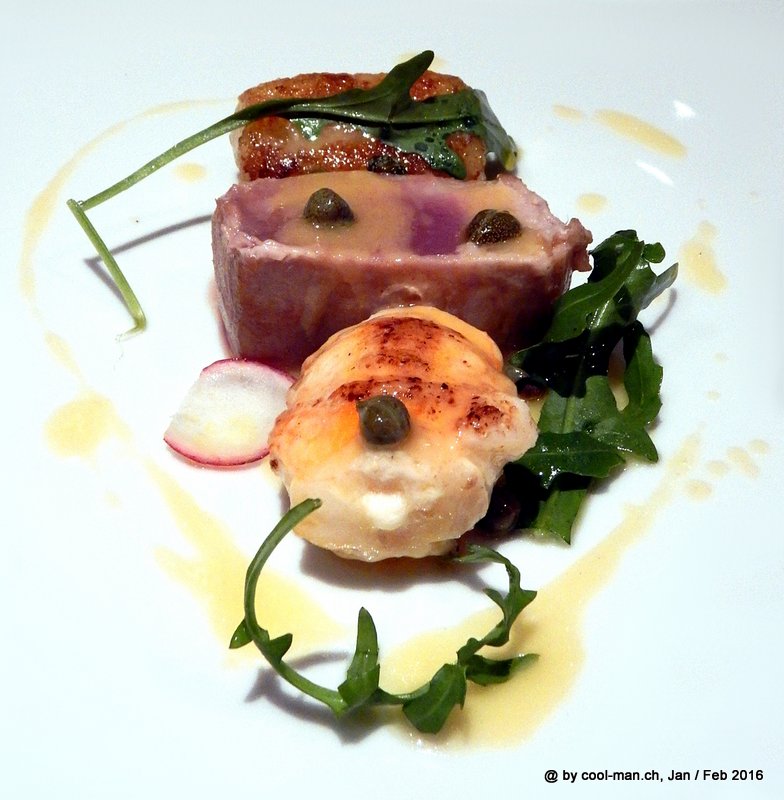 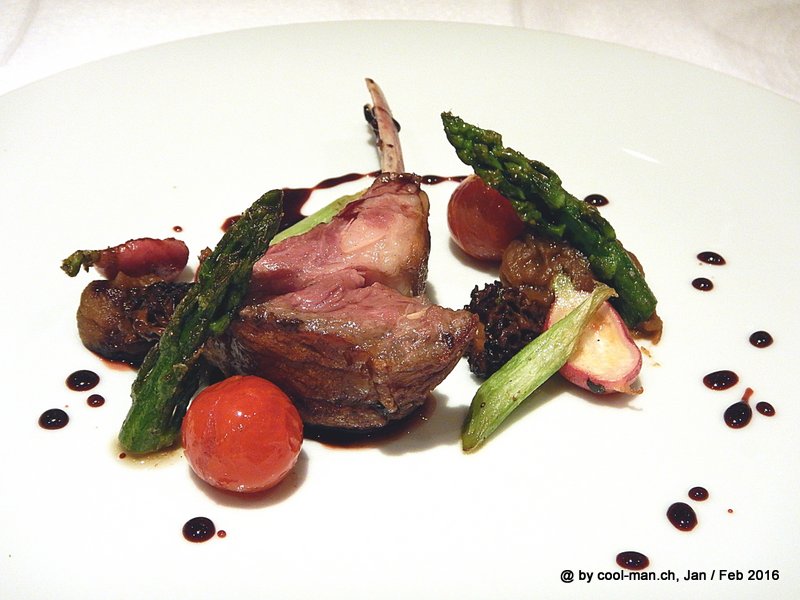 Fillet of beef with pepper crust 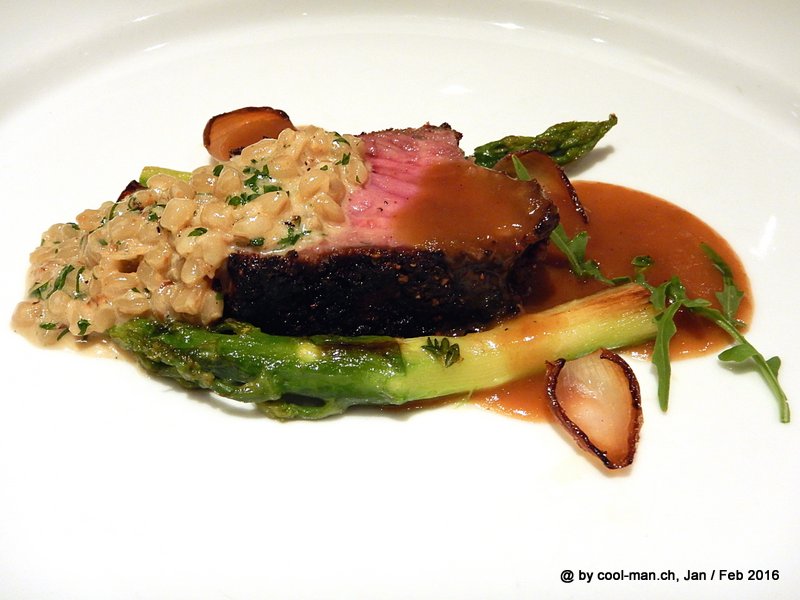 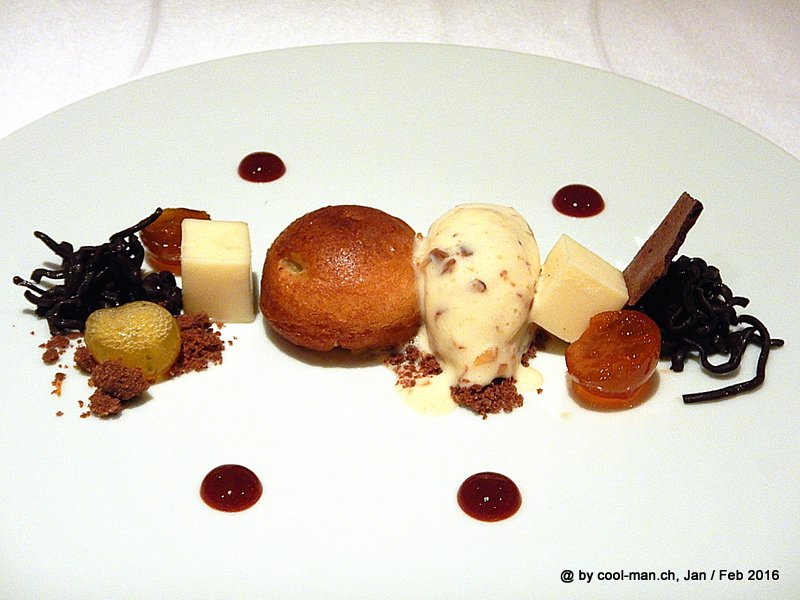 Actually I wanted to discover the surroundings of Lima for 10 days between my restaurant visits. However, this plan was difficult to implement, as the buses to my destinations often departed far away from my hotel. Lima is a huge city with 9 million inhabitants. Moreover, it was impossible to find the timetable of these buses. Further it turned out that at one of my desired destinations there was no possibility to stay overnight.

Iquitos and the Peruvian Amazon region

I was looking for an alternative and found it in Peru’s Amazon region. Many years ago I was in the Brazilian Amazon, whose atmosphere I liked very much. So I booked a flight to Iquitos. With over 400’000 inhabitants, it is the largest city in the world that is not accessible by road, but only by plane or ship. Big ships can reach the city after a 3’600 km long journey on the Amazon from the Atlantic Ocean. Like the city of Manaus on the Brazilian side of the Amazon, Iquitos, founded by Jesuits in 1757, was also influenced by the rubber boom. The discovery of vulcanization by Charles Goodyear opened up new applications for this raw material. This process made rubber a stable commodity that was no longer sticky at high temperatures and brittle at low temperatures. Thanks to the steamboats, it was possible to trade on the Amazon for the first time, because it is impossible to travel against the current with muscle power. From 1870 the town grew by leaps and bounds. The steamboats brought more European adventurers with each arrival and soon 30,000 inhabitants were counted. The advent of cars gave a further boost to the demand for rubber. Some people made huge profits by exporting rubber, so that the latest fashion from Paris was in vogue in the middle of the jungle. The building materials of the rubber barons’ houses consisted almost exclusively of imported materials from Europe. There is even a house designed by Gustave Eiffel in Iquitos. Even today, these houses are the most beautiful in the city. I lived in the house of rubber baron Morey, which is now a hotel. The suite was huge, with a separate lounge and a spacious bathroom.

I stayed in the house of rubber baron Morey, which is now a hotel. 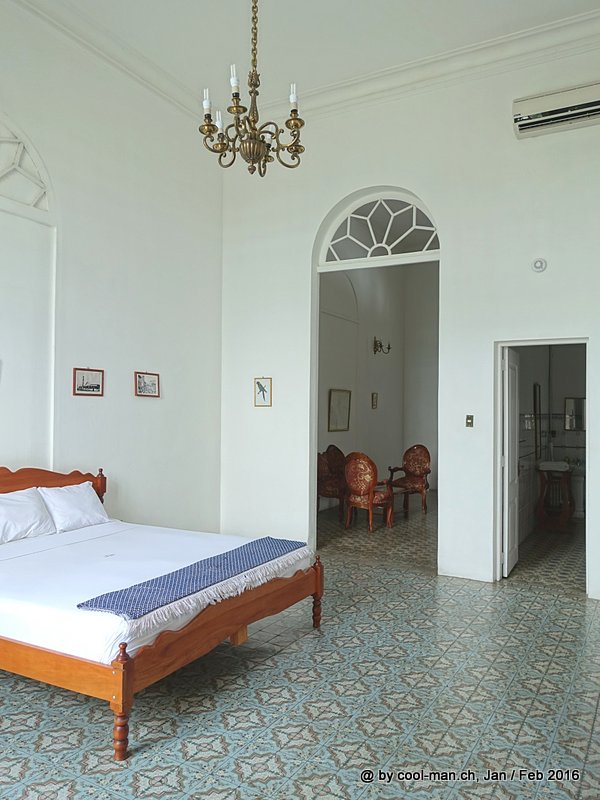 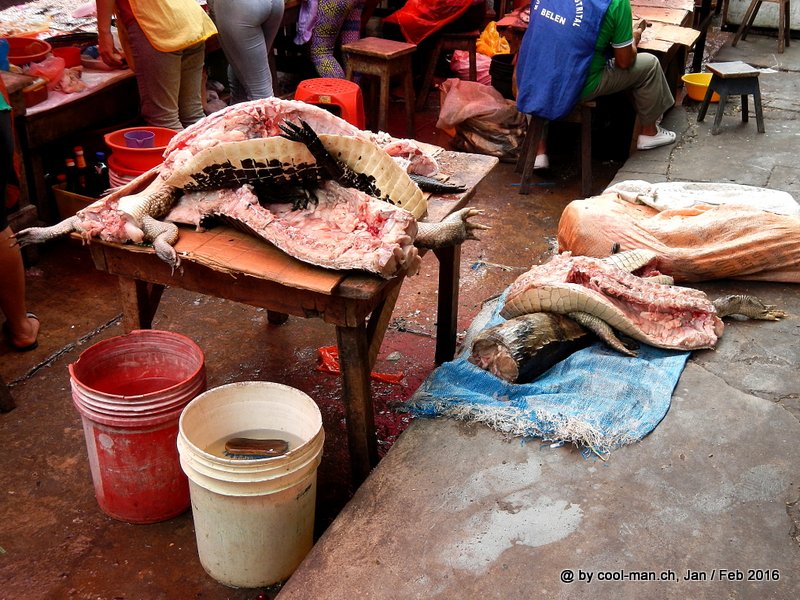 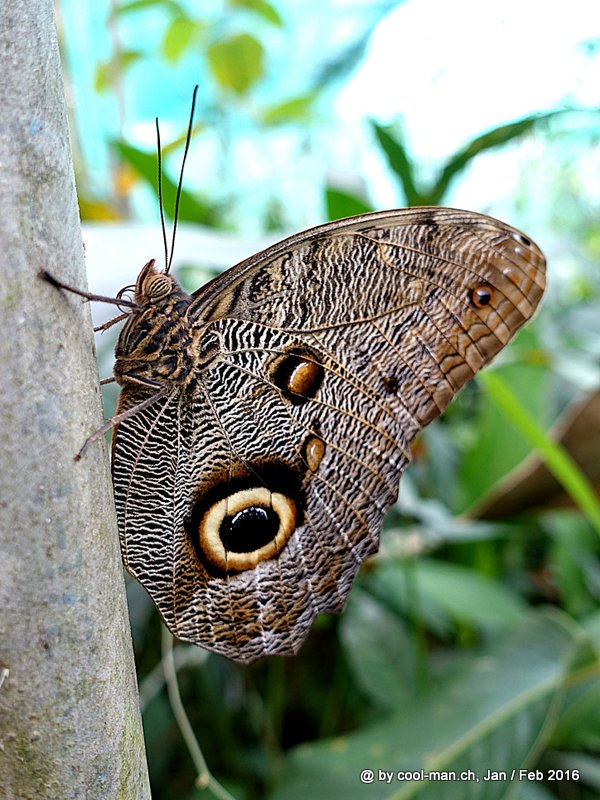 I wanted to get to know the jungle in as untouched a landscape as possible and decided on the Muyuna Lodge, which is located four boat hours upstream at the border to the Pacaya – Samiria National Park. Most of the lodges are much closer to Iquitos and serve tourists who have little time. The animals are partly captured (often robbed as babies) or fed to show themselves. It is important for Muyuna Lodge not to support such practices. The seclusion and proximity to the national park, however, guaranteed wildlife sightings. This meant that the animals were often distant. But with the binoculars one could observe them very well. Since I had no telephoto lens with me, it was difficult to take striking pictures of the animals. I saw different kinds of monkeys, sloths, caimans, the two species of dolphins, many kinds and sizes of parrots and macaws, various fish, snakes, lizards, countless birds, ants, termites, tarantulas and other spiders, scorpions, big and small frogs, butterflies, diverse plants, mushrooms and millions of mosquitoes.

I had my personal guide who had grown up in the jungle and knew every (really every) animal and plant species and their medical uses. He could recognize and imitate the call of over 200 birds and saw the camouflaged animals in fractions of a second. This was necessary because there was very little time left in the moving boat to discover the animals. It took much longer for me to recognize the animal in the thicket. We undertook boat tours and hikes, also at night. Long, wide clothes, preferably in two layers, and insect spray were essential to reduce mosquito bites as much as possible. Malaria prophylaxis was seemingly not necessary. I took the tablets anyway. Not far from the lodge was a village of Amazon residents, some of whom were employed by the lodge, for example as boatmen or in the kitchen. The jungle animals are best protected when the inhabitants of the villages are not hungry and therefore do not have to hunt.

My guide and I encountered this nonvenomous snake on a walk through the jungle. 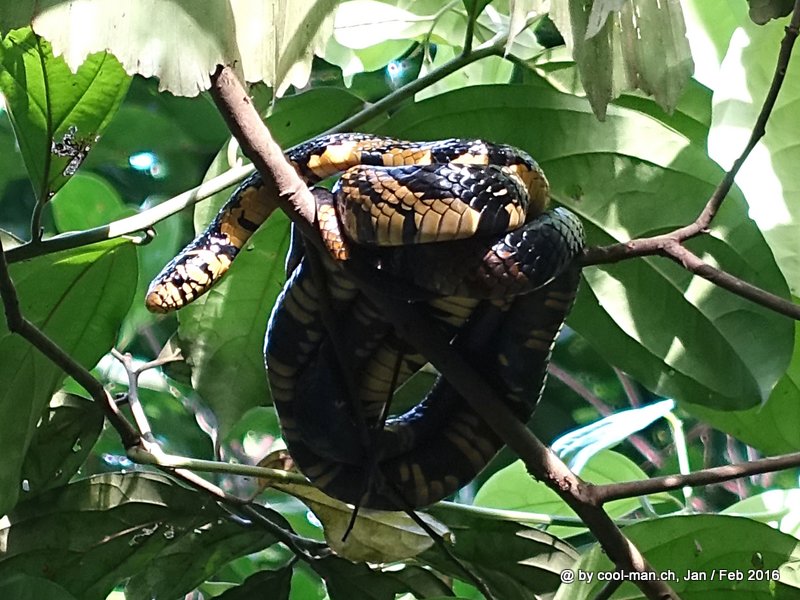 … and this Pinktoe Tarantula. 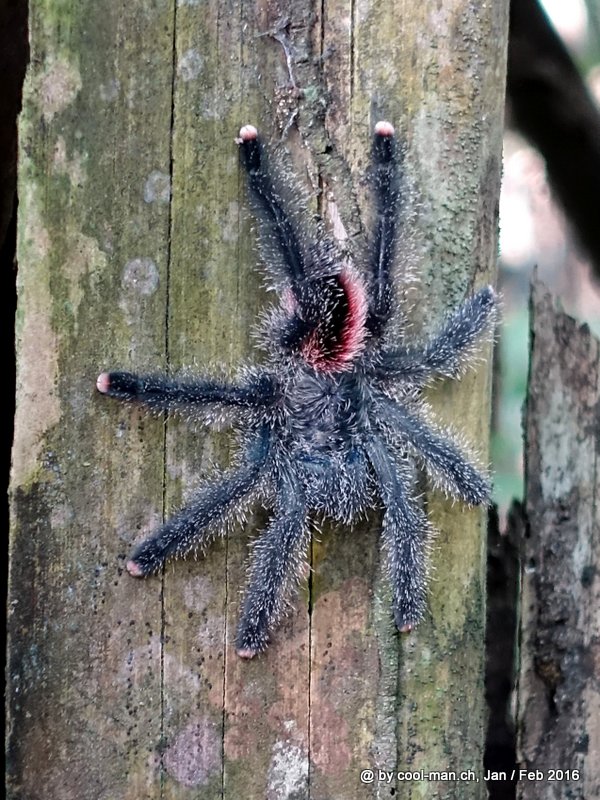 A Noisy Night Monkey with a baby, one of the many different kind of monkeys I came across. 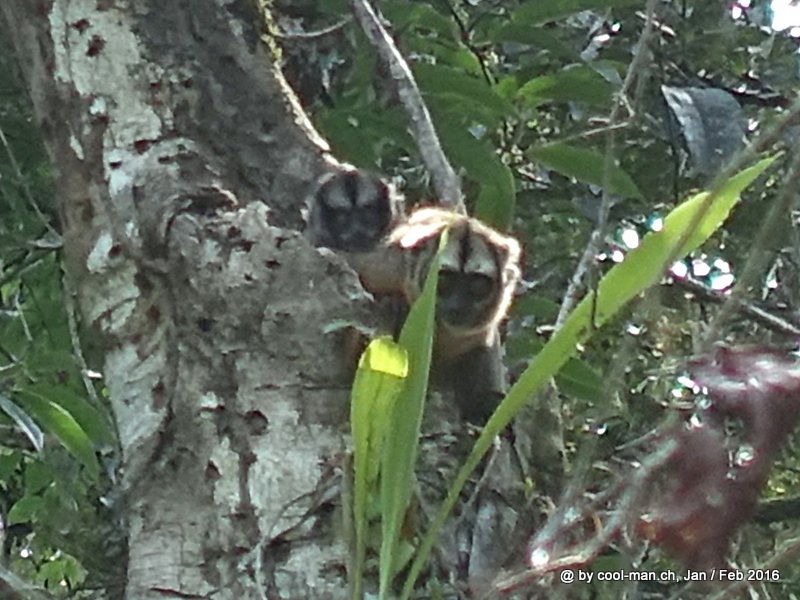 We encountered this nocturnal Black Scorpion on a night walk. 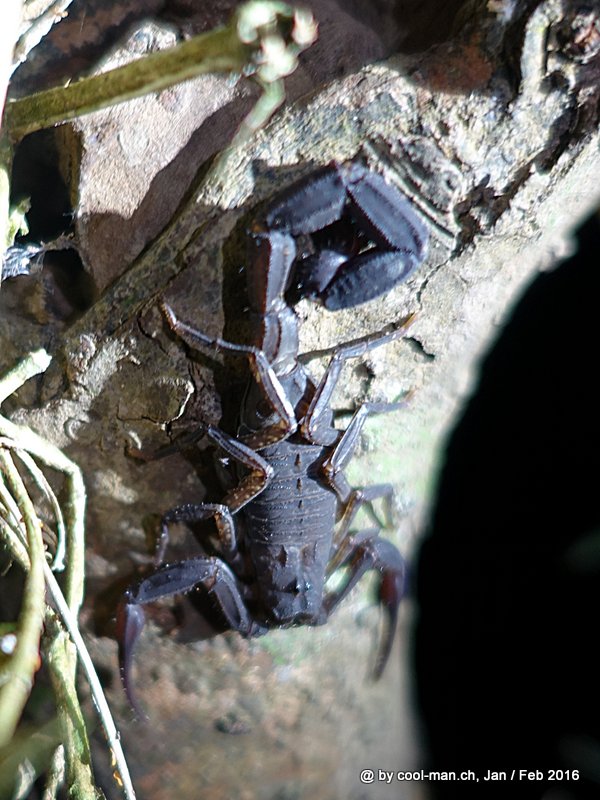 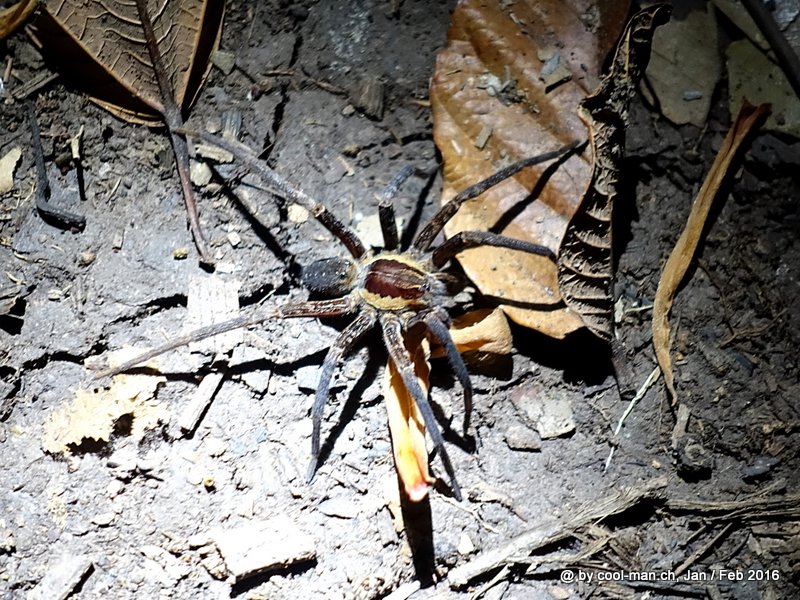 … and this Smoky Jungle Frog. 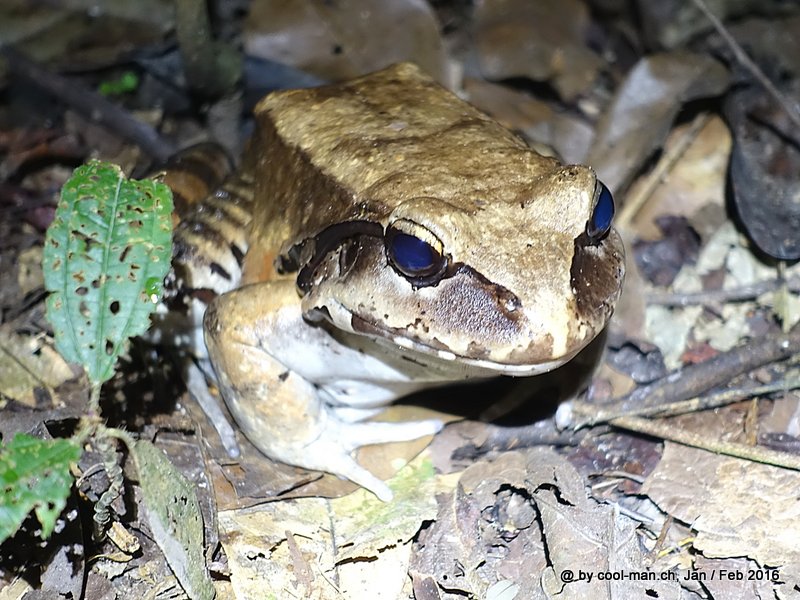 Fresh tracks of a Jaguar. This animal does not attack humans. 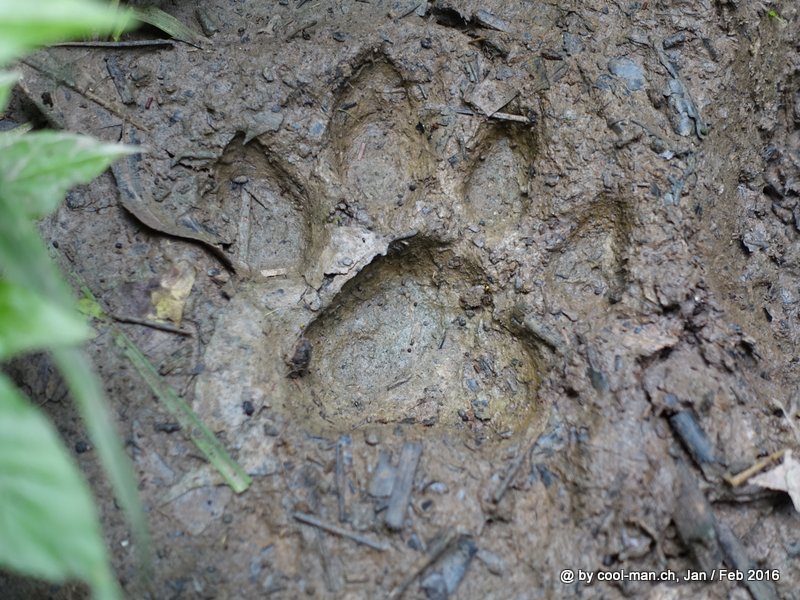 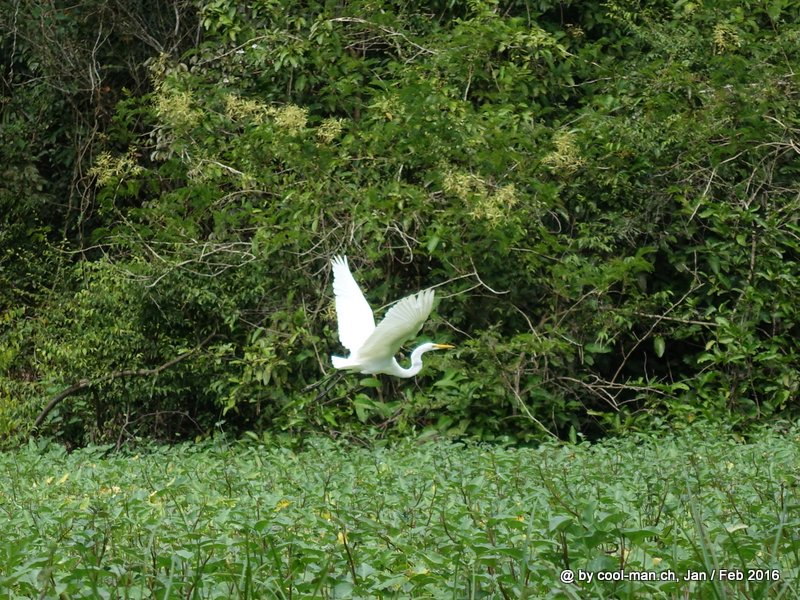 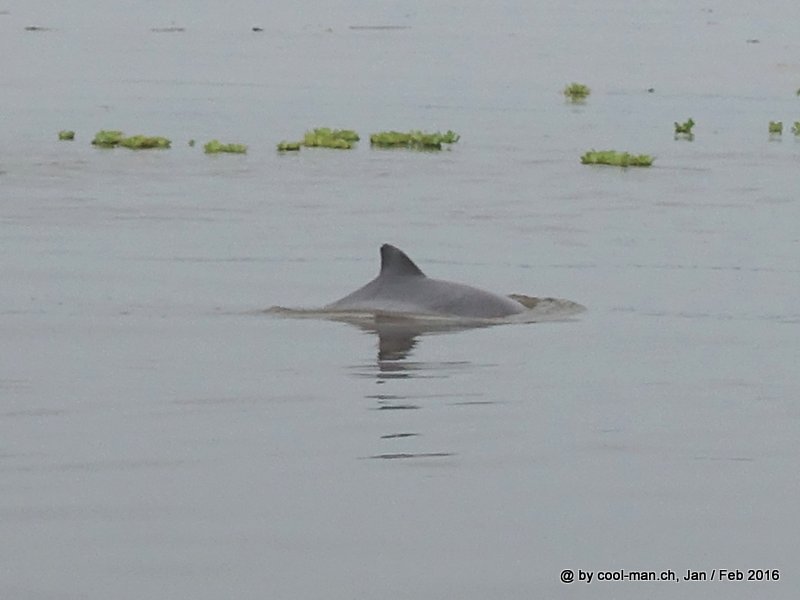 The village San Juan de Yanayacu is half a mile away from the lodge. There is neither electricity nor mobile phone connection. Some village people are employed by the lodge. 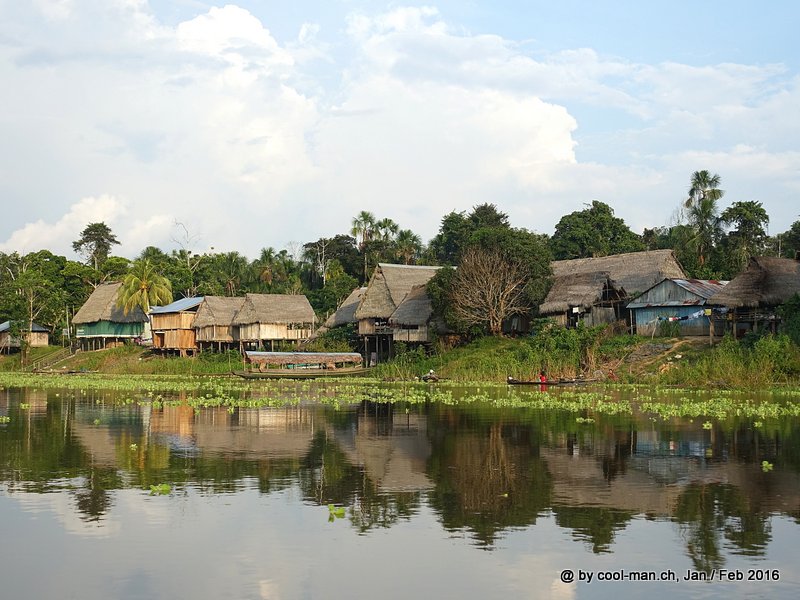 You get one-tenth of a second to spot an animal in the jungle from the passing boat. Do you find it?

My guide saw it immediately. It is easier on the picture than in the wild because the caiman lizard is almost at the center of the lower half of the photo.

My guide hunted fishes with a harpoon. This one is a Peacock Bass. I did not see any fish in the murky Amazon-water.

The Black Collared Hawk is common in the Amazon region. 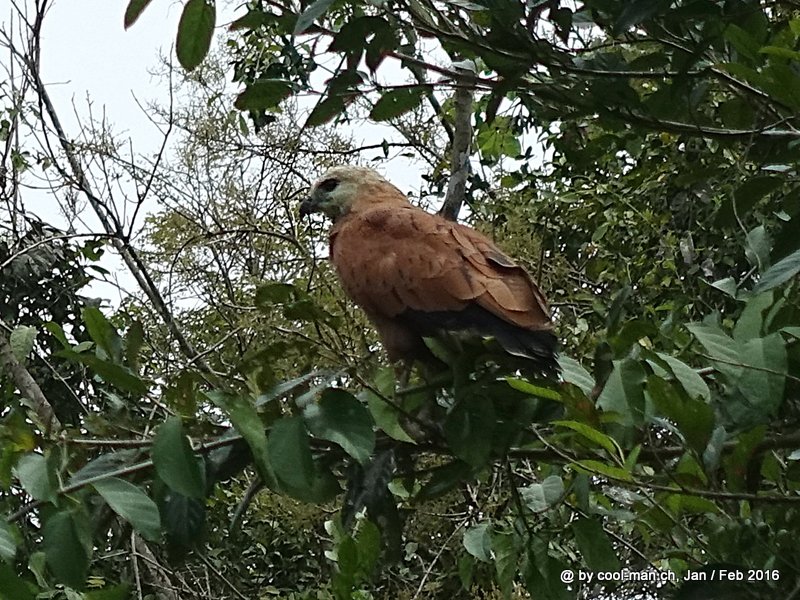 After my return from the lodge I stayed one more night in Iquitos. There I met a woman from Vienna who lived two weeks with a shaman in the jungle to take the Amazon drug Ayahuasca. In certain western circles this seems to be the new kick. Despite negative side effects, the potion did not work as desired for her. But that was normal in the beginning. She also told me that she was robbed in Lima in a hotel mini bus. The robber as a motorbike rider smashed the side window , penetrated the inside of the bus with his upper body through the broken window and grabbed her bag. Unfortunately, she was so naive that she had her passport and credit cards in her bag. I use a belly bag for these things, which I wear under my clothes. The way the robbers proceeded is extremely audacious and surprised me. Until that time I had my small luggage with the important things like the laptop always in the taxi interior, because I believed that it was safer there. From now on I stow it with my suitcase in the trunk, where one cannot see it.

Back in Lima I visited the same evening the restaurant Central, according to the ranking the best restaurant in South America. The difference between the two worlds couldn’t be bigger! The big menu was called Mater Elevations, the same as last year, and the principle that food of the same height is served per course remained unchanged. A year ago the courses were very innovative and sometimes too experimental, but this year Virgílio Martínez and his wife Pia opted for a more enjoyable but less surprising menu. This year, too, the Coca bread was not missing. Many courses consisted of endemic South American plants, which are still cultivated by local peasants, but are not lucrative for the international food business and are therefore hardly offered. The wine selection this time was international, including European wines. The Trouvaillen from Peru were no longer there. For me the BORAGó in Santiago de Chile was the number 1 in South America, because it was more creative and surprising and the wines were really top. Moreover, the BORAGó is much less expensive than the Central or the Astrid y Gaston – which will probably change soon with this success. 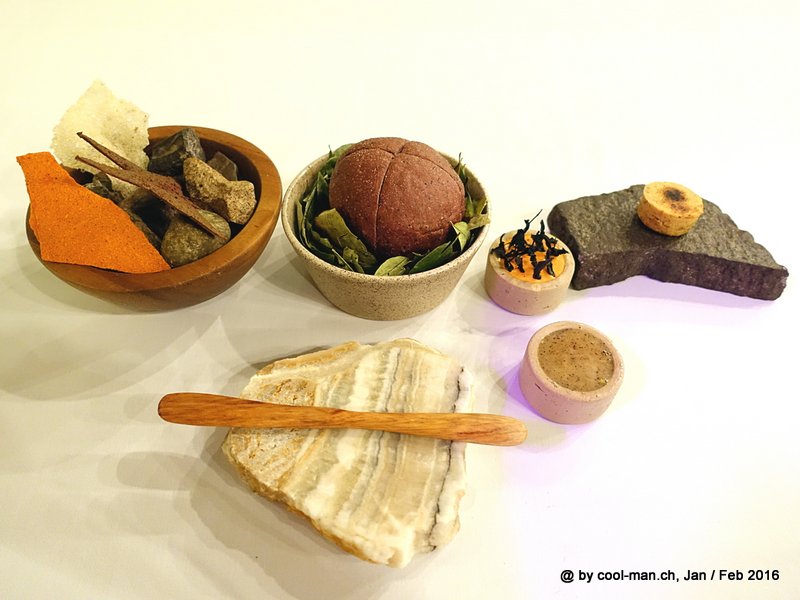 Here are some of the courses 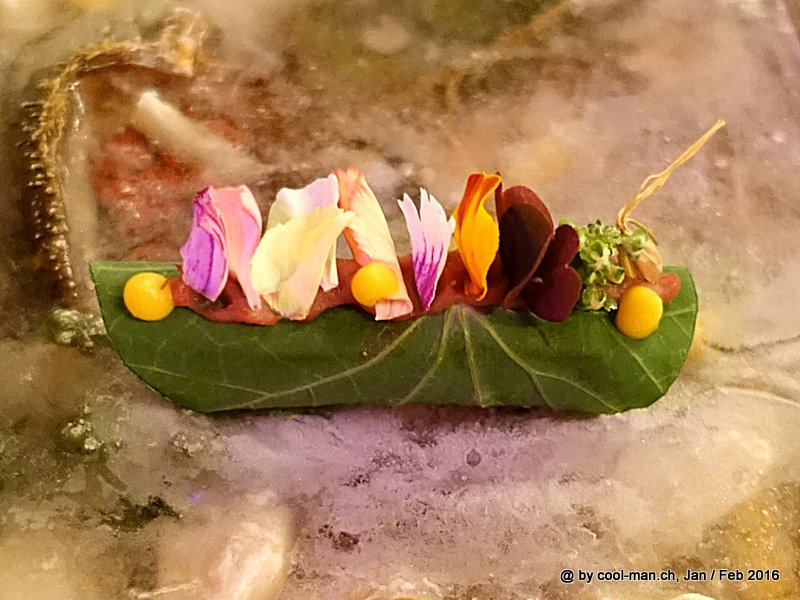 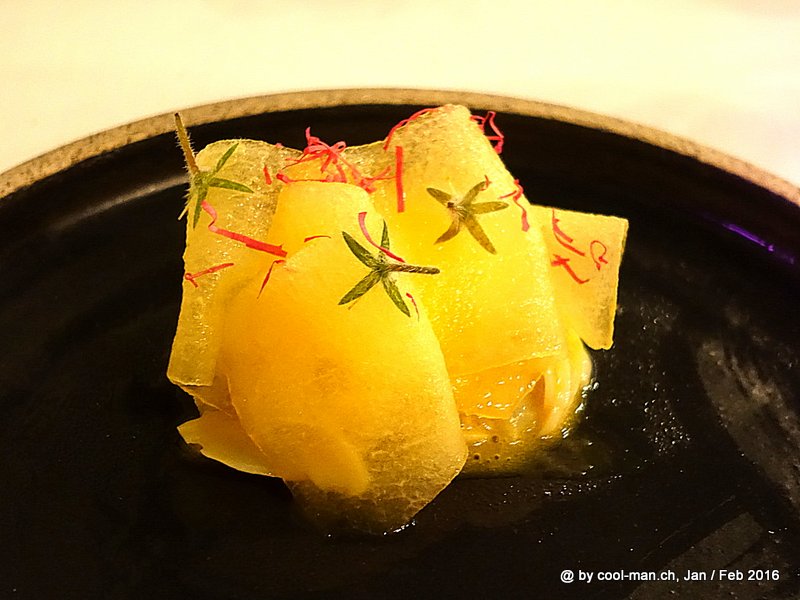 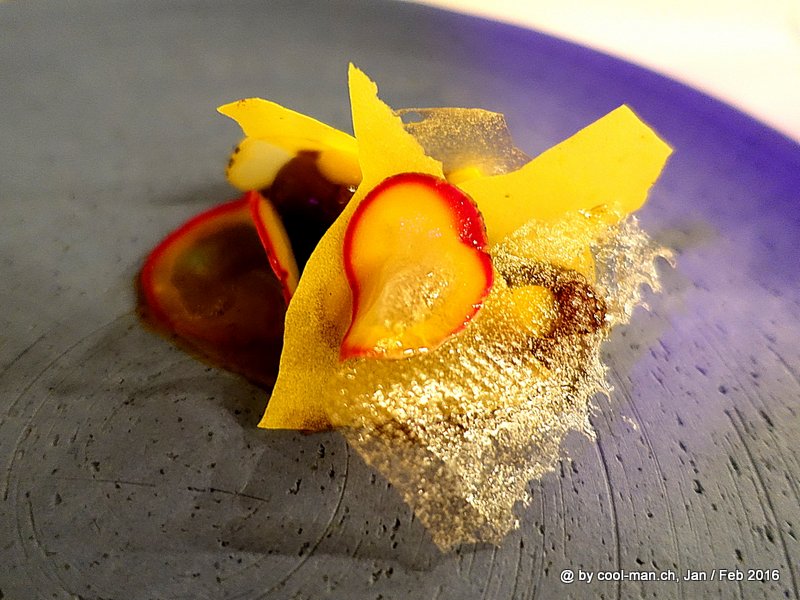 Next on the agenda was my longest flight so far to the other side of the globe. It took 33 hours and 20 minutes with KLM from Lima via Amsterdam to Manila, including 5.5 hours break in Amsterdam.