After visiting the best snorkeling spots in Indonesia I traveled to the Baliem Valley. It is a fertile valley in Papua, situated at 1’800 meters above sea level, which was discovered by the western world only in 1938 during an exploration flight. At that time the different tribes lived in the valley as in the Stone Age. Until now no road has been built through the Papuan jungle, so that everything has to be flown in. In 1954, the first missionary was parachuted and in 1963 the Indonesian government annexed Papua. The missionaries did their work well, and today, the peoples of the Baliem Valley believe in Jesus Christ alongside spirits. The Indonesian government also did their best to “civilize” these people. As a result, their culture is becoming extinct. The younger generation no longer wants to live in the simple, narrow huts and move to the largest village in the valley, to Wamena. In twenty years the culture will be largely disappeared and and will only revive once a year at the Baliem Valley Cultural Festival.

The Dani tribe lives around Wamena and is therefore most visited. The men are for the most part naked, only their penis is covered by a gourd. They are adorned with colored feathers of rare birds, shells, pig’s teeth, which are fixed by a hole in the nose, and dyed pig fat, which they apply to their upper bodies and the face. Women wear skirts that consist of dried grass before marriage and after marriage from woven textiles. The Indonesian government wanted to ban the wearing of the penis gourd, but could not enforce it.

How a pig is transported 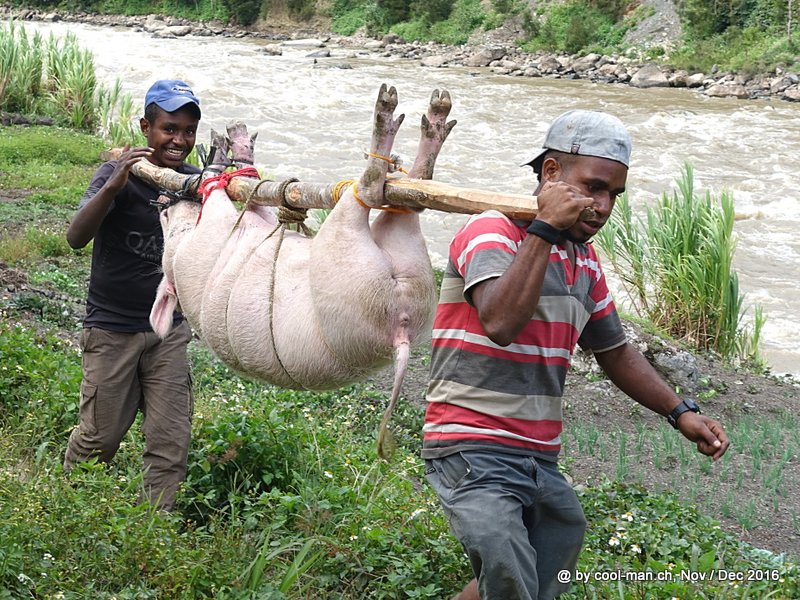 The first encounter with the Dani tribe was cautious 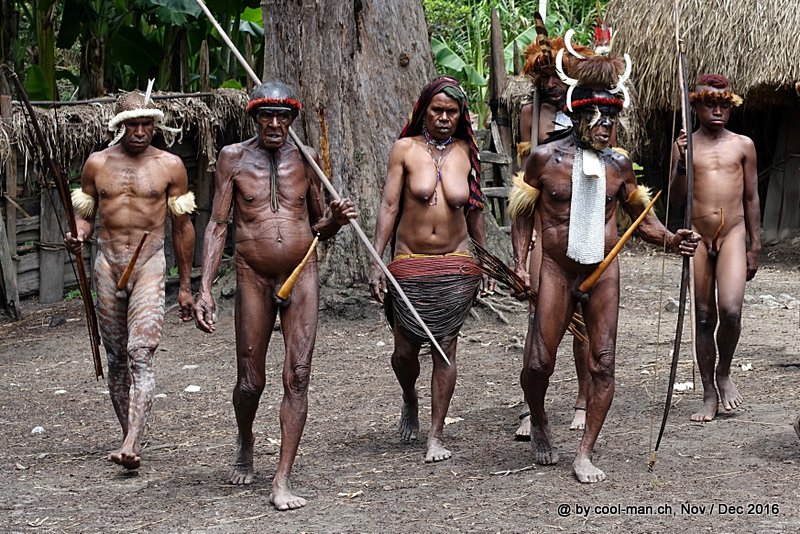 The chief of the clan turned out to be a showman and welcomed us. 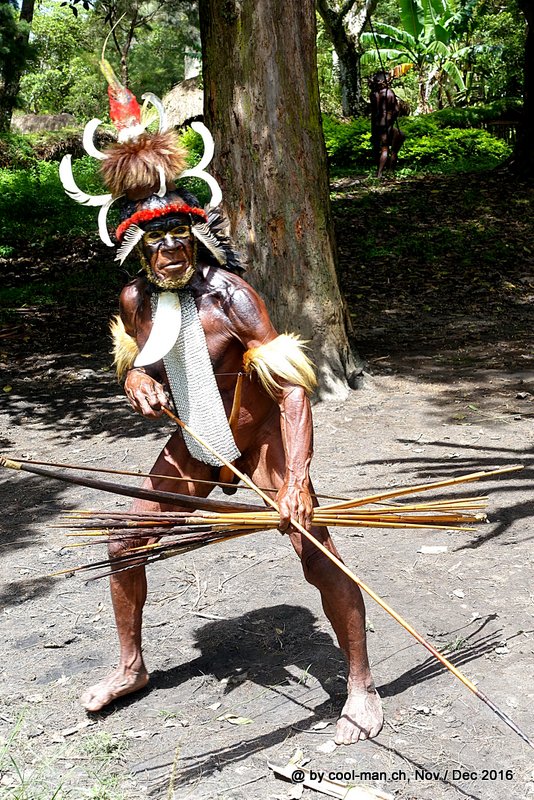 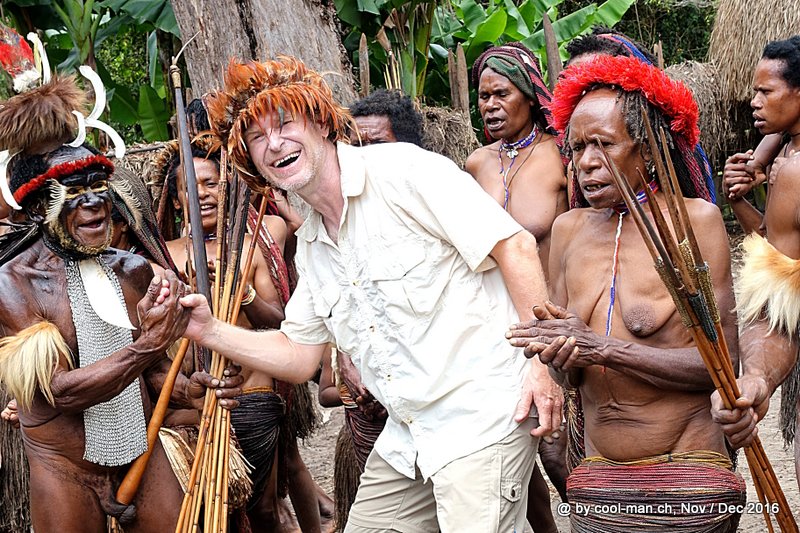 A pig was slaughtered for Christmas. 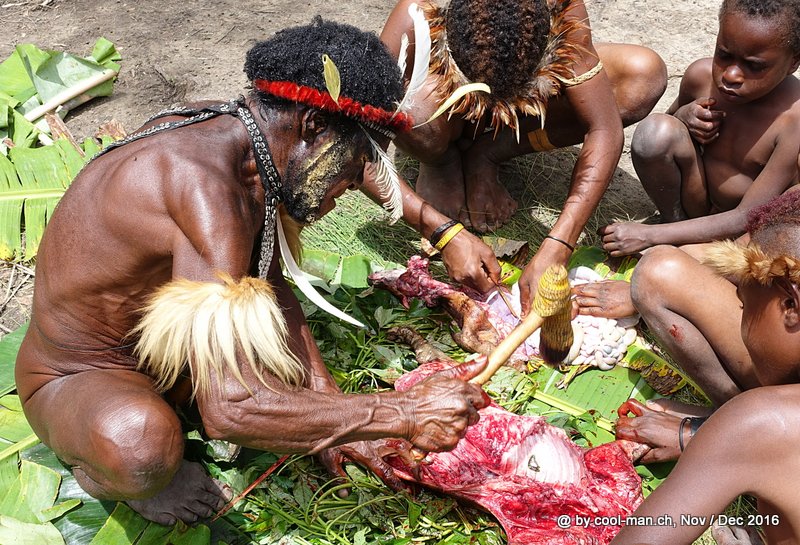 The fire was ignited using a Stone Age method.

The hot stones are carried into a hole in the ground. With the heat of the stones the pig is cooked in the hole for about an hour. 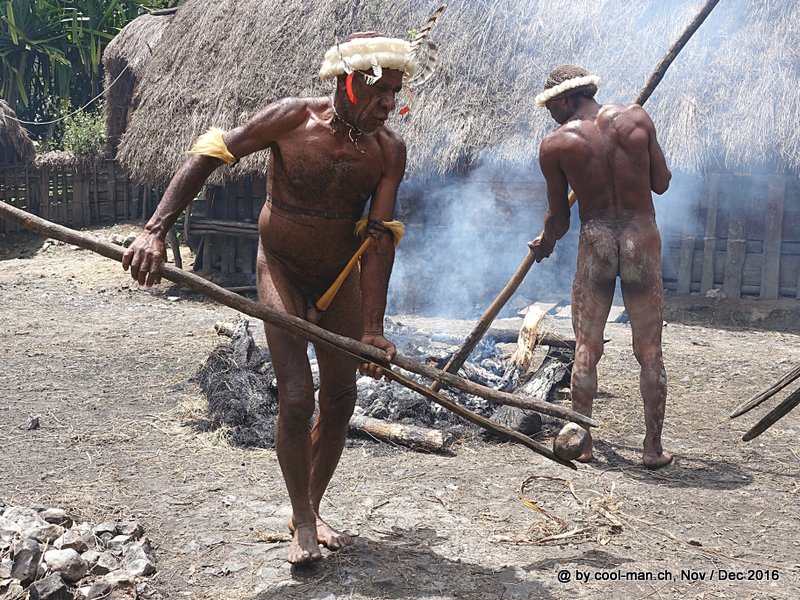 The status of a Dani depends first on the number of pigs he owns. Pigs are the second most important living creatures after their fellow humans and belong to the family. Many Papua people believe that the world originated from a prehistoric pig. The size of the pig herd determines how many women a Dani-man can have. Sometimes a pig is exchanged for a woman, but in general the herd shows the economic and social position of the man, which allows him to maintain a large household.

The Dani people live a modest, peasant life. Pigs are only eaten on special occasions. Otherwise, the tribes of the Baliem Valley feed on sweet potatoes, of which they know more than 70 different species. It is cooked over a fire ignited with friction, which covers the whole hut in smoke. There are no pans, pots and other cooking utensils. Some Dani learned English and are now making good money as tourist guides, as many tourists pay excessive prices for their services. Others earn part of their living by selling homemade jewellery or posing for photos with their penis gourds or grass skirt. On the other hand, people in remote villages that are hardly visited by tourists are very hospitable and generous. A traveler wanted to spend the night in a village. The inhabitants asked him to stay even longer. Finally he stayed in the village for four days and was fed with food and drink. On his departure they did not want to accept any money.

Death is a drastic event for the Dani, too. As a sign of mourning, the women of the mourning family were each severed a finger phalanx by a stone ax. Women mutilated in this way can still be found in the villages.

What does the future hold for these two Dani boys? 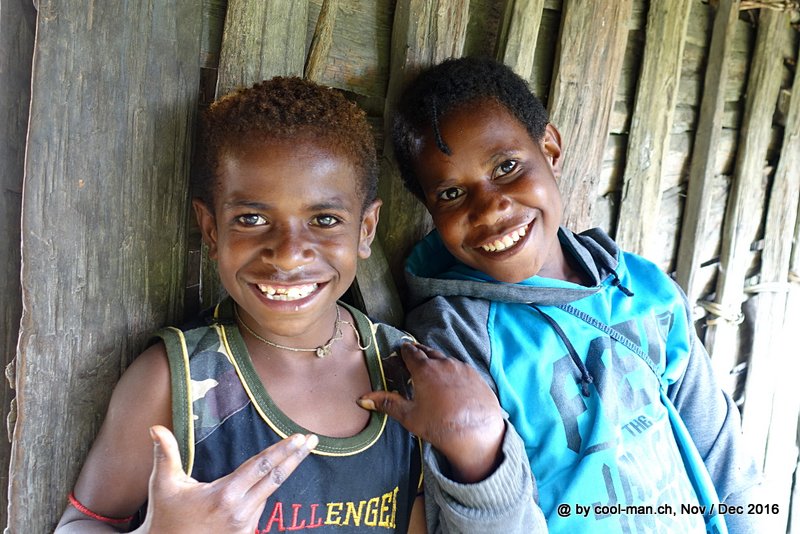 The two months in Indonesia passed quickly. Now I am already in East Africa, where I will spend the next two and a half months.