From Buenos Aires, Argentina I traveled on to Colombia. The part of the country with the big cities of Bogota, Medellin and Cali is located on different high plateaus between 2’800 (Bogota) and 1’000 (Cali) meters above sea level, which makes the temperatures pleasantly despite the proximity to the equator. Only in the coastal strip, where the majority of the population is dark-skinned, do you find hot temperatures.

My first destination in Colombia was Medellin, where I helped a former work colleague for a week to change from the Colombian accounting standard to the international standard.

Medellin is known beyond the country’s borders for its Christmas lighting. 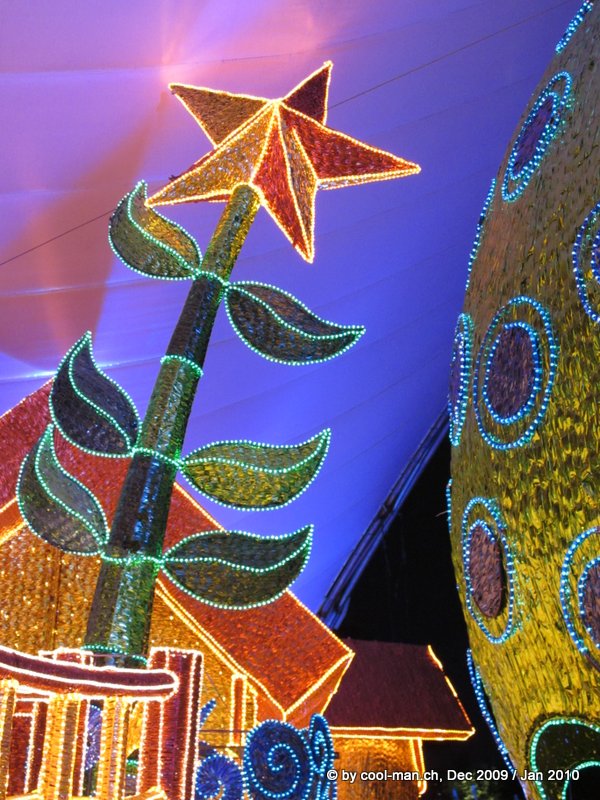 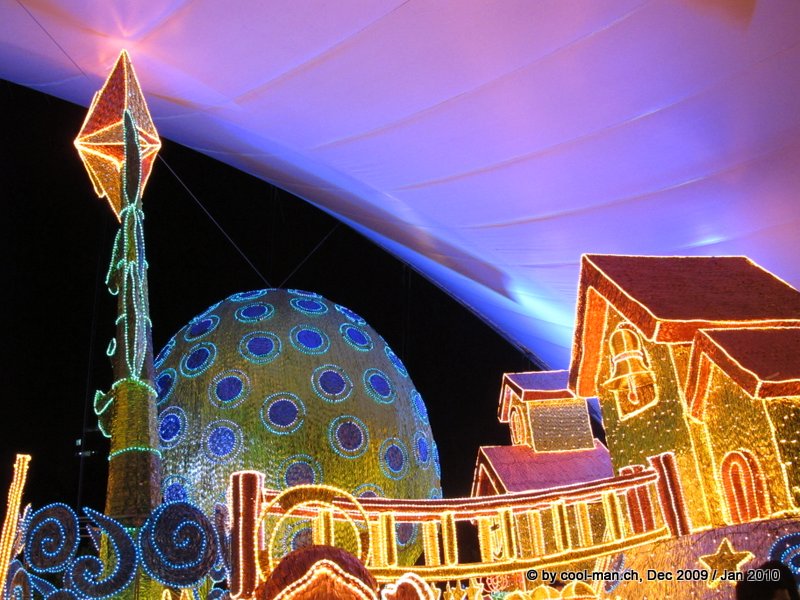 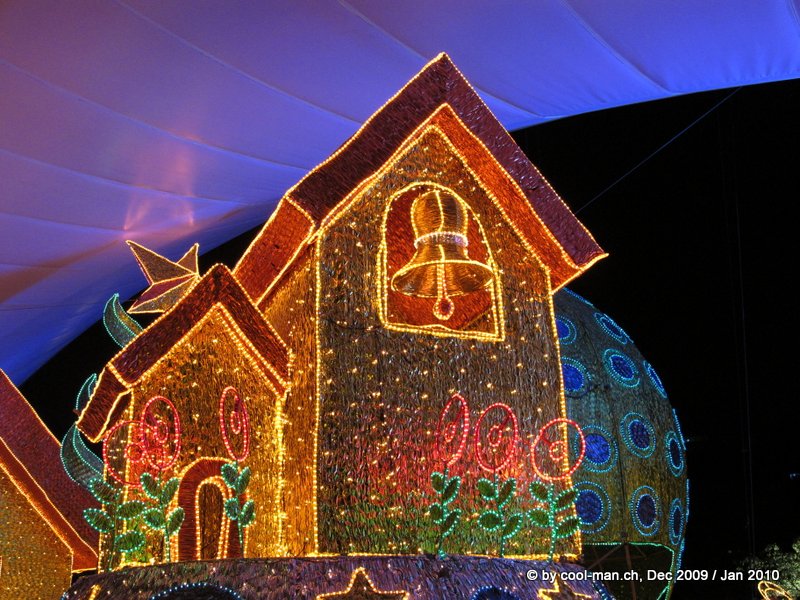 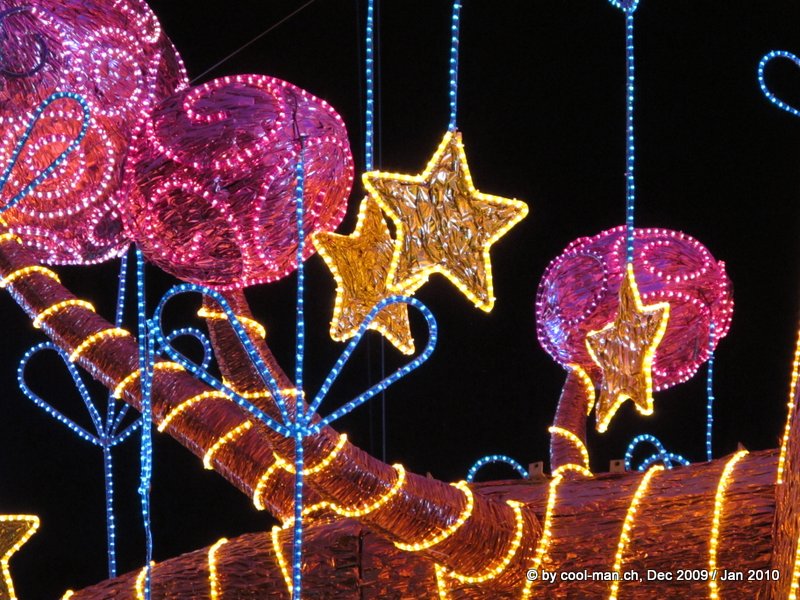 Many of Colombias public figures come from here. Besides Pablo Escobar, the former drug king, the painter and sculptor Fernando Botero is very famous. Many of his sculptures, which always depict corpulent people, stand on a square in the old town named after him. One notices how clean and organized Medellin is. 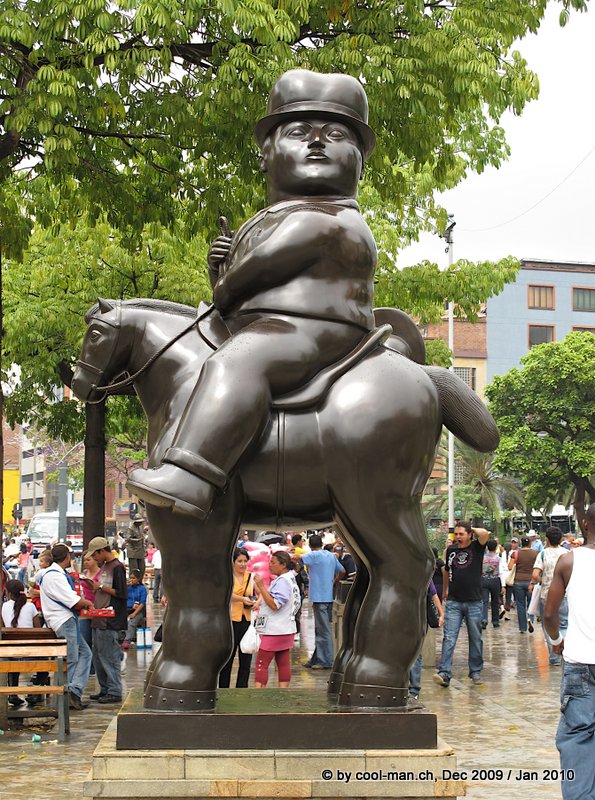 Since women are often well-built around the hips, breast augmentations are common in order to restore the proportions desired by Colombian women. Those who can afford the 2-3’000 dollars will have the operation at the age of sixteen. For fun, the valleys of Cali and Medellin are therefore called Silicon Valleys. I sometimes wondered if everything was real. When in doubt, probably not.

Next, I went on a trip to the Zona Cafetera, where I enjoyed excellent coffee and learned everything about growing and processing coffee.

The world’s largest wax palm trees grow in this area, which can reach a height of 60 meters. 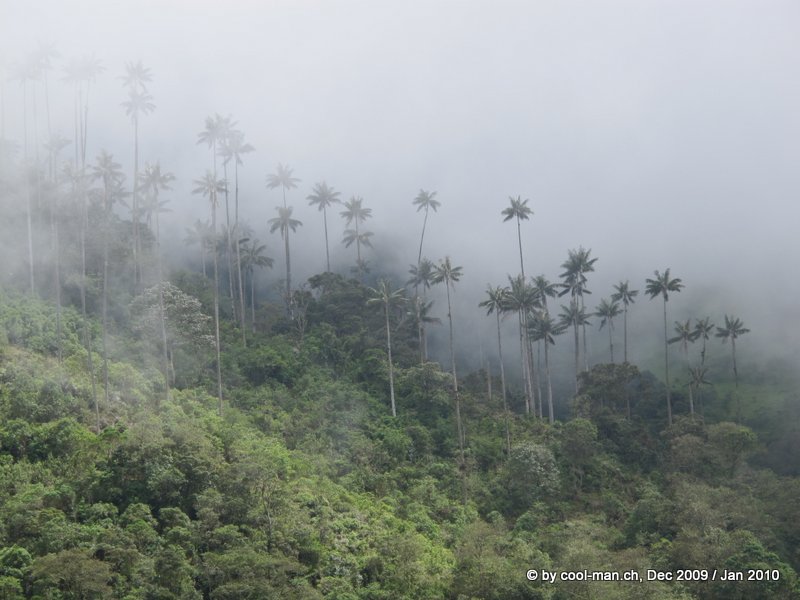 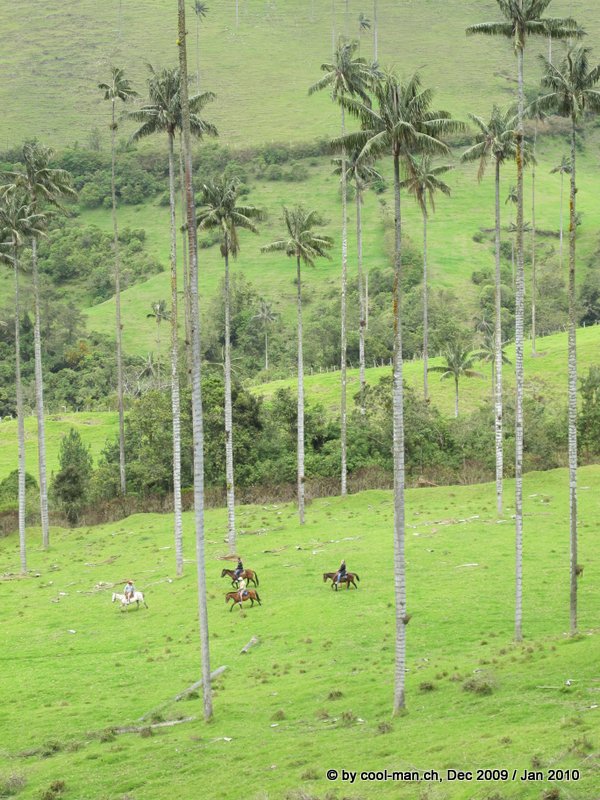 Hiking in the surrounding enchanted primeval forests is a special experience. 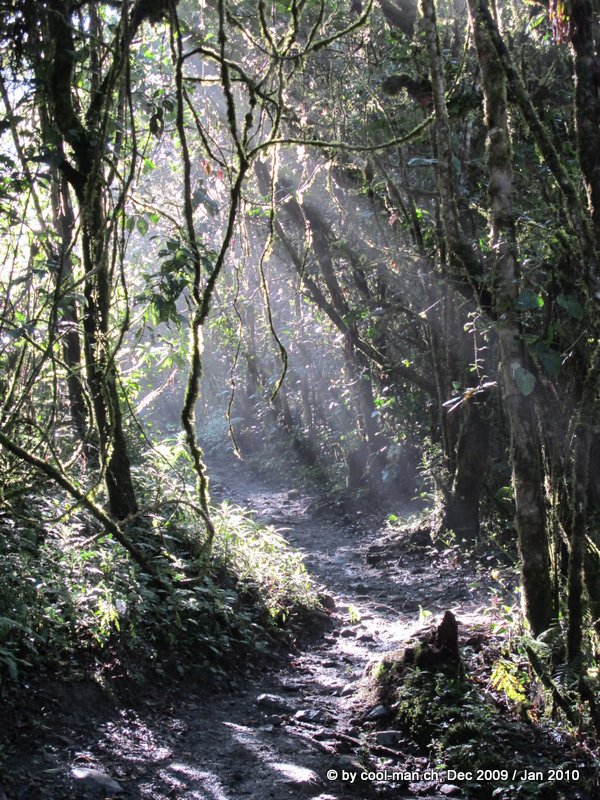 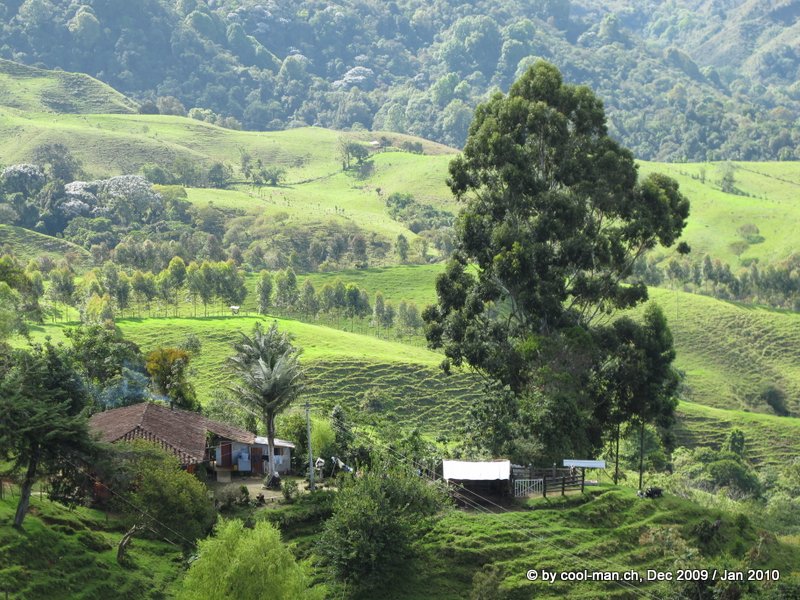 I spent Christmas in the charming little town of Salento.

Back in Medellin, I realized that I would spend an extra day in this city, because my colleague’s colleague – his name is Giovanni – had not informed me that we would not depart for the coast until a day later. This day I drove to a huge 137-metre-high boulder called El Peñón de Guatapé, which offered a fantastic view of the surrounding hills and lakes. 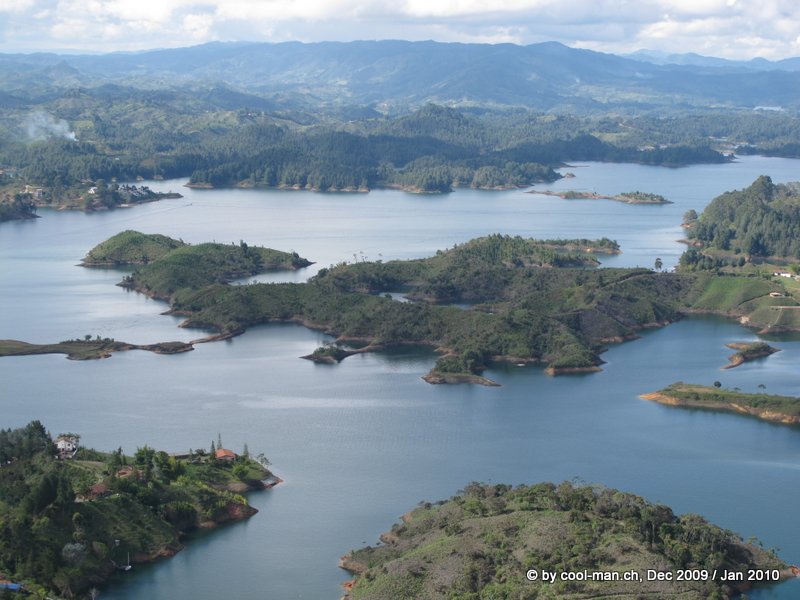 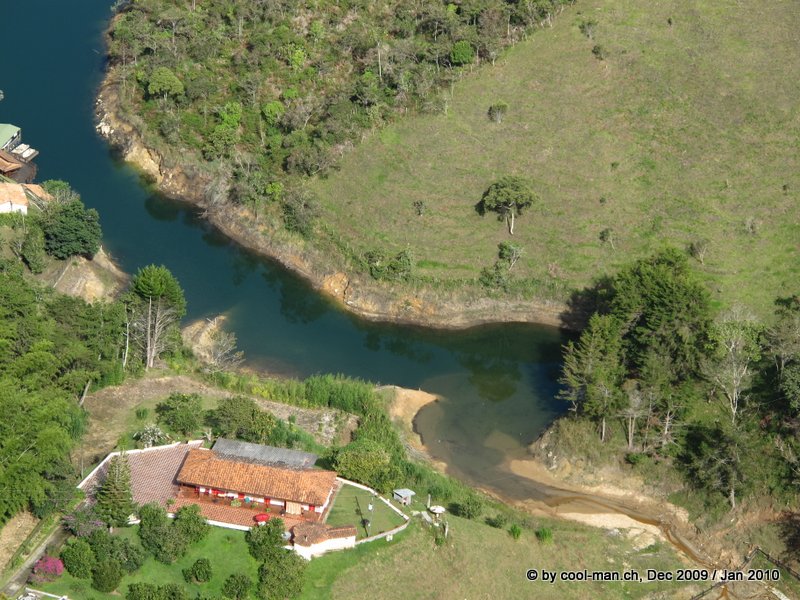 Drive to the coast to San Antera

Giovanni invited me to go to the coast with him and his extended family. He has rented a house there, right by the sea. We started at 5 o’clock in the morning, because the journey takes 12 hours. In the areas with rebel sympathizers there was a soldier standing at the roadside every 200 meters. Around noon his car broke down – the odometer had stopped at 145’000 km some time ago. After 4 hours the car was ready to drive again. But after half an hour the car was no longer working. With the most important luggage we stopped a bus. In the city where we changed buses, the next one didn’t leave because the driver didn’t pass the alcohol test. Since we were dependent on this bus to arrive at the holiday home before midnight, Giovanni finally drove the bus after he had passed the alcohol test successfully. When we got off the bus, it was another few kilometers to the beach and far and wide there was no other means of transport to be found. Luckily the police were on the spot. They came back with an emergency vehicle and drove us to the house. Was this a normal Colombian trip? 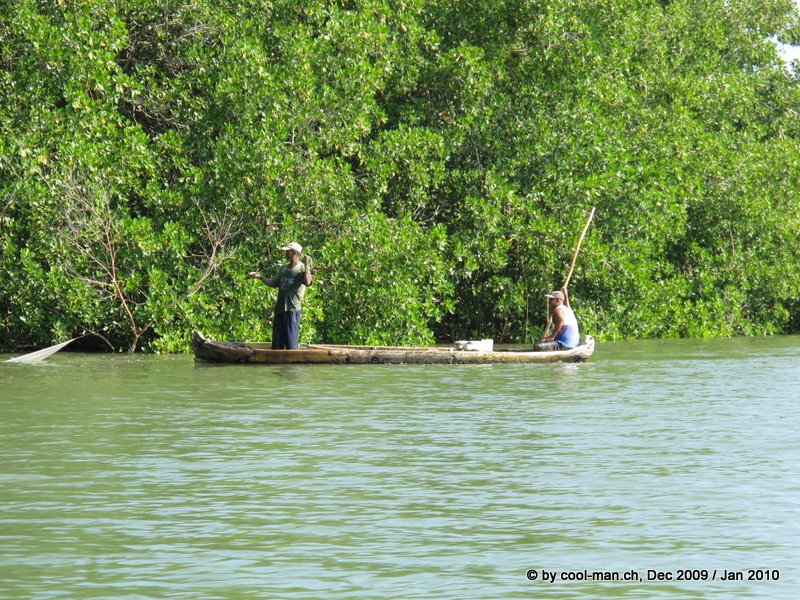 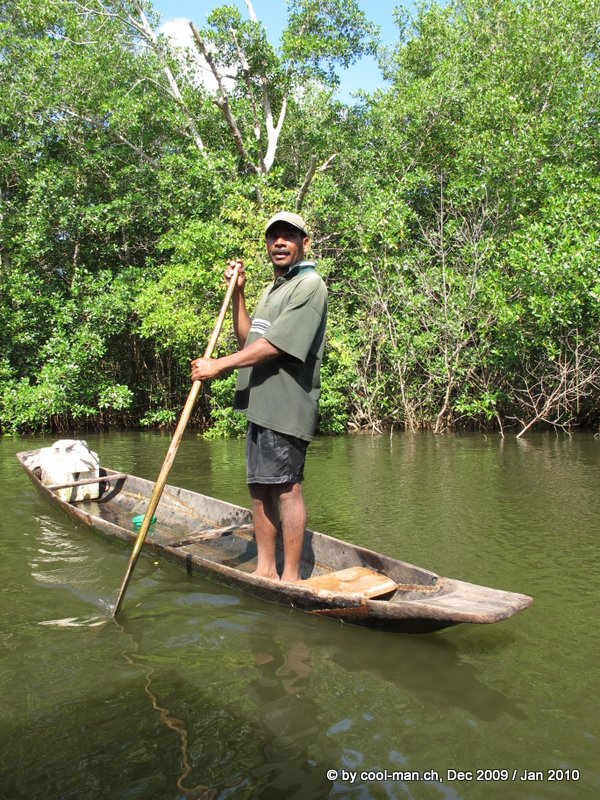 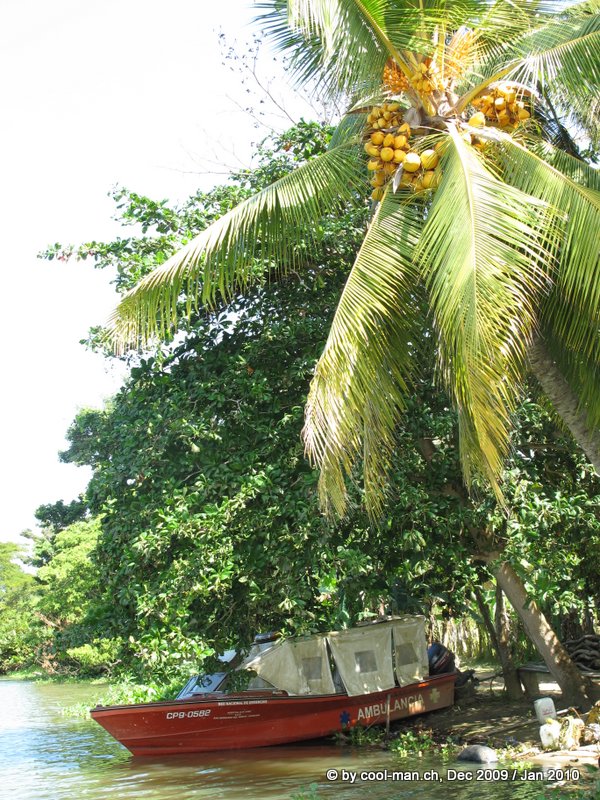 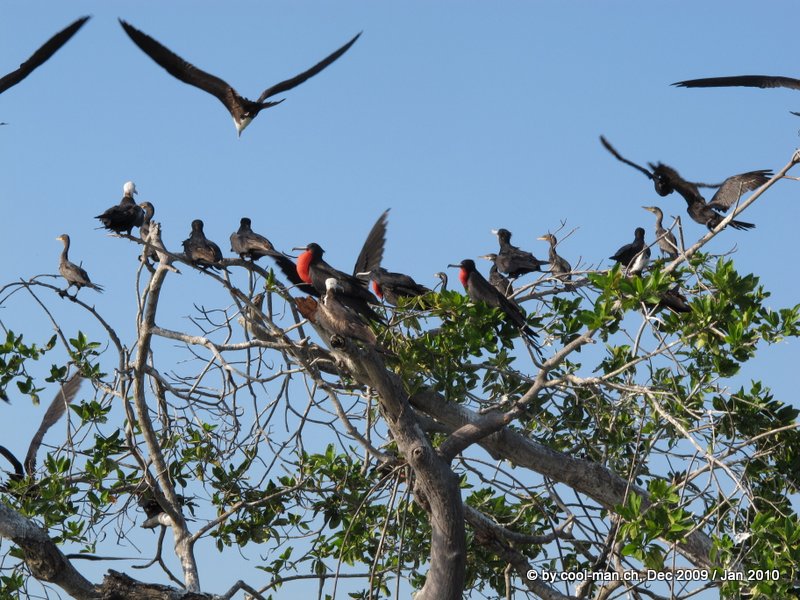 Unfortunately, it turned out that many of Giovanni’s promises were so far from reality and I was to pay a larger part of the holiday costs for the whole family that I no longer felt like spending my time with these people and from one day to the next I traveled on to Cartagena.

Cartagena was one of the colonial main ports of the Spanish. Here the slaves from Africa were brought ashore and large quantities of gold were shipped to Spain. No wonder, the city was attacked again and again. The Spaniards reacted with extensive fortifications, which can still be seen today. The whole center consists of the original colonial houses. It was a special experience to spend the New Year’s Eve in this city. As Cartagena is an international tourist destination, there are also many good restaurants and open-air cafes. 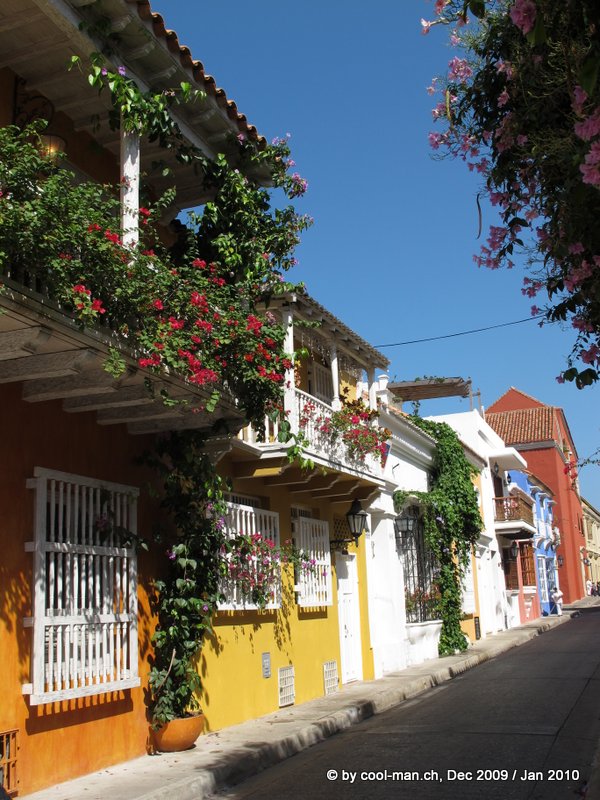 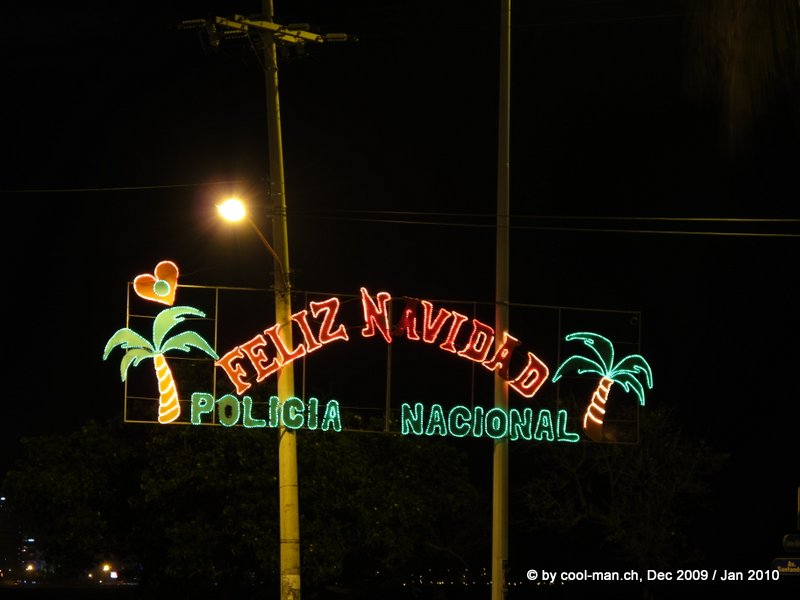 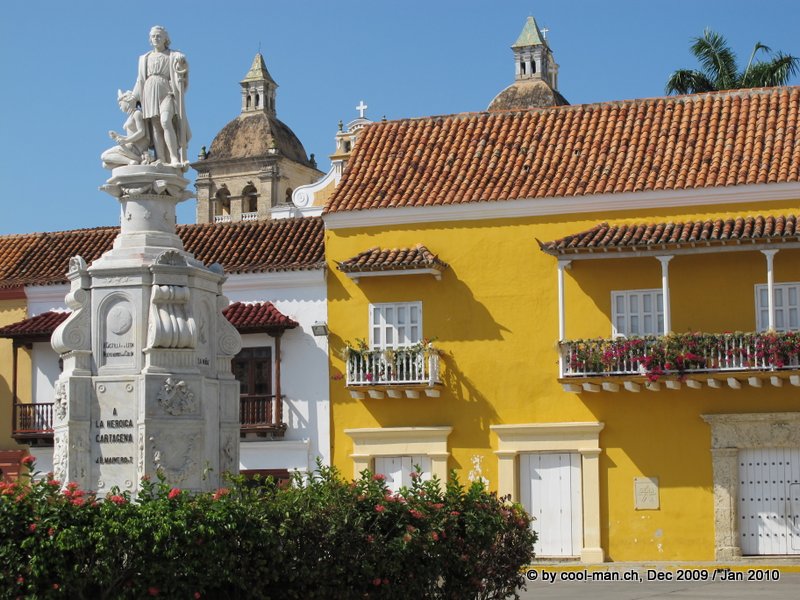 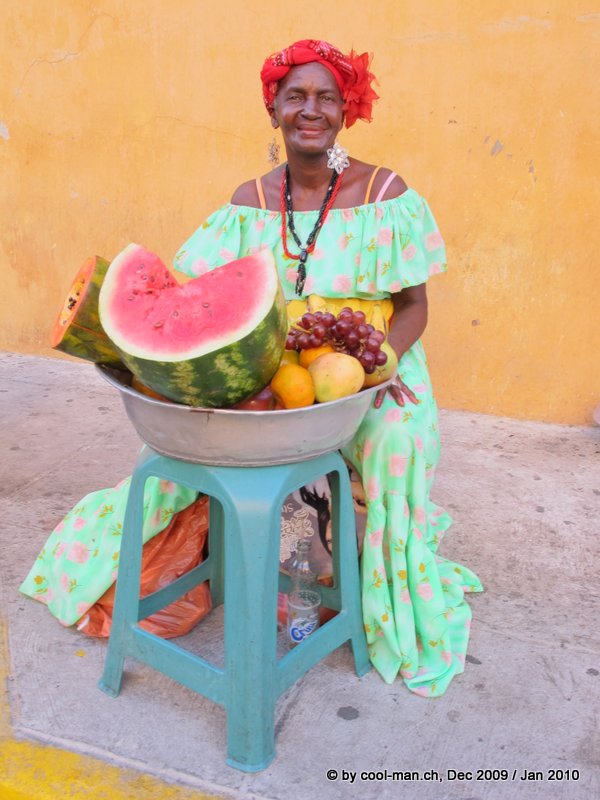 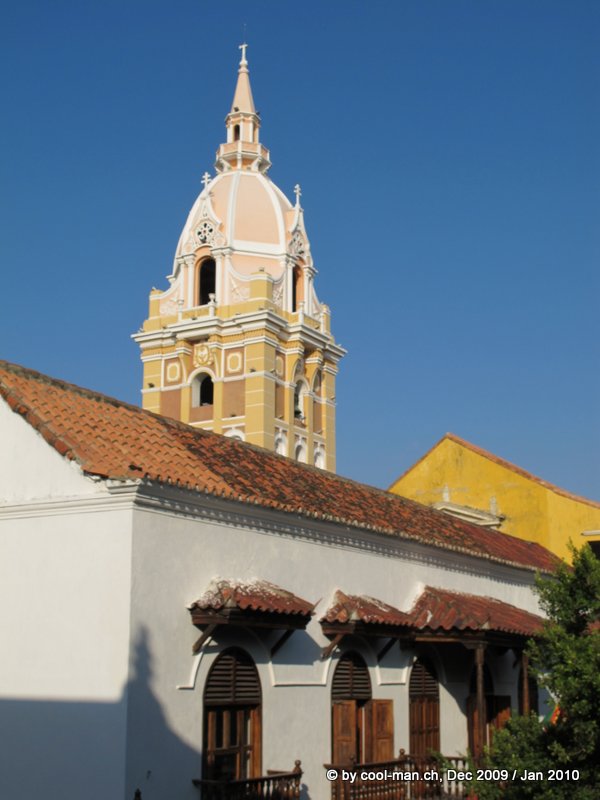 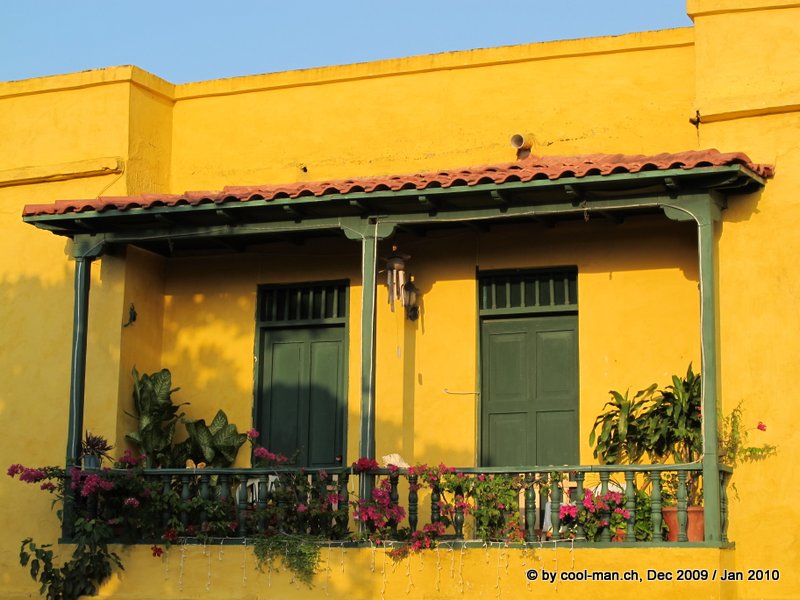 My last stop in Colombia was the capital Bogotá. When checking in at the hotel I received a list of warnings like not to walk at night, not to talk to strangers or accept food and drinks from them etc. When you then see that the laundry, where I brought my clothes to be washed, was completely barred and that they unlock the lock just for my laundry bag, you know that the warnings are meant seriously. As in Medellin, there are some safe streets in the city, where those who can afford it meet in trendy bars and restaurants. Some of these are really good, with restaurants on Gault Millau level and of course a lot cheaper than in Switzerland. Bordeaux Grands Crus wines are also served. To these zonas and back you go by taxi.

View from Monte Monserrate over the city 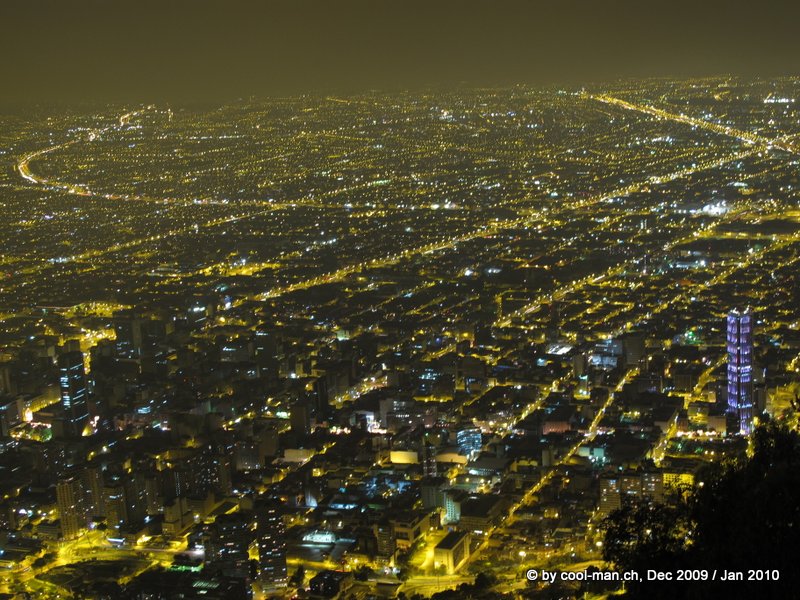 If it were not for the Gold Museum, Bogota would not be worth the trip. In this museum the gold works of the pre-colonial cultures of Colombia are exhibited. They already used all the goldsmithing techniques known today. These cultures also valued the gold with its brilliance and the unweatherability highly and the possession of as much gold as possible was already then a status symbol. It was also used for religious purposes. Although the museum has around 50,000 gold exhibits, most of the works of art made by the various tribes are irretrievably lost, because the Spaniards, who were only interested in gold as a metal, melted everything down before transporting it to Spain. 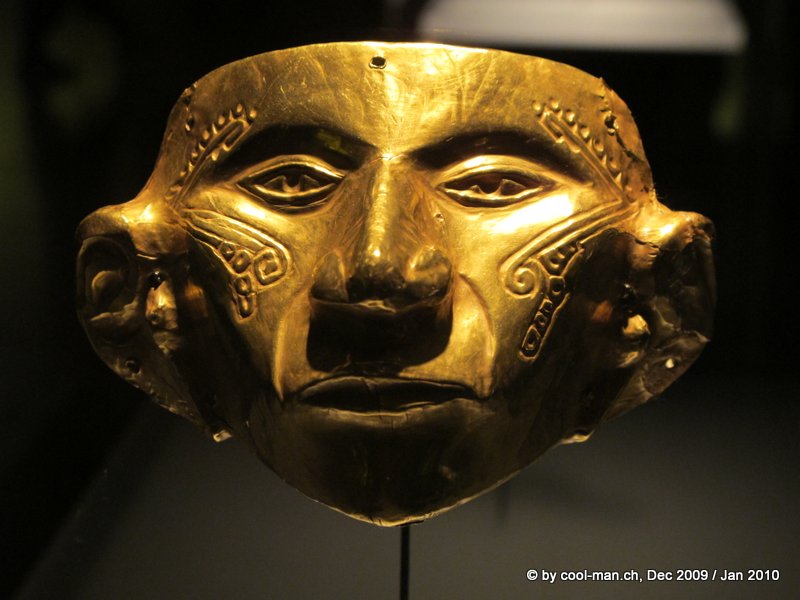 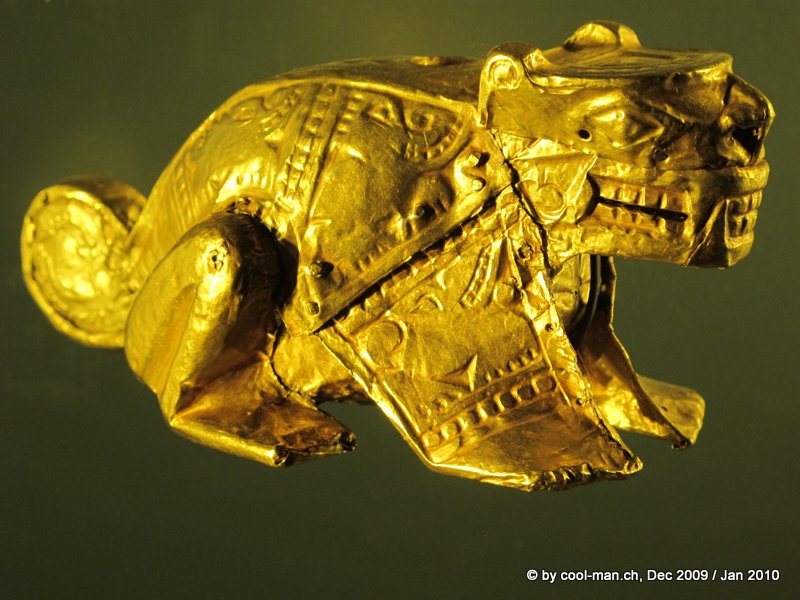 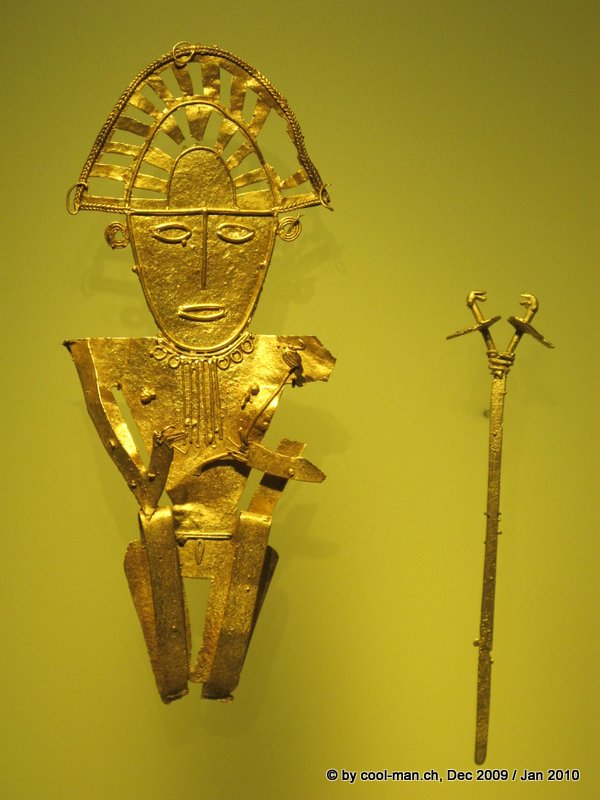 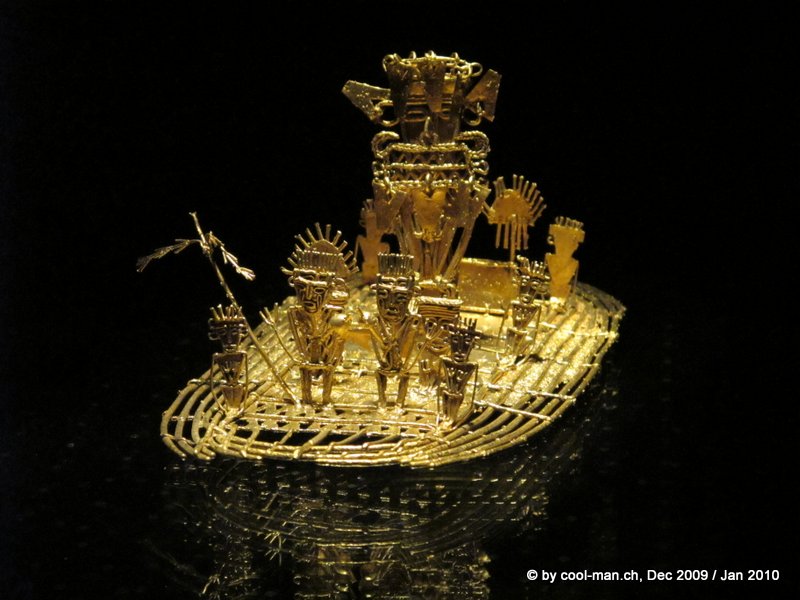 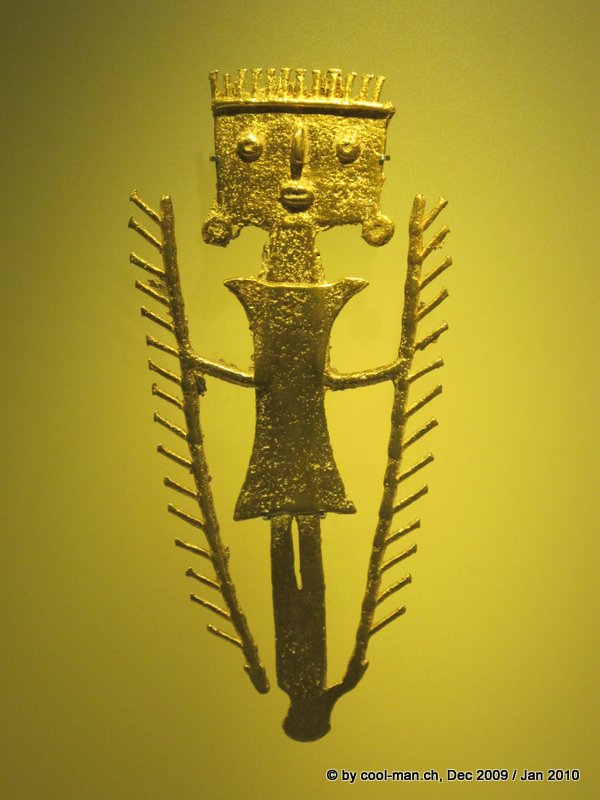 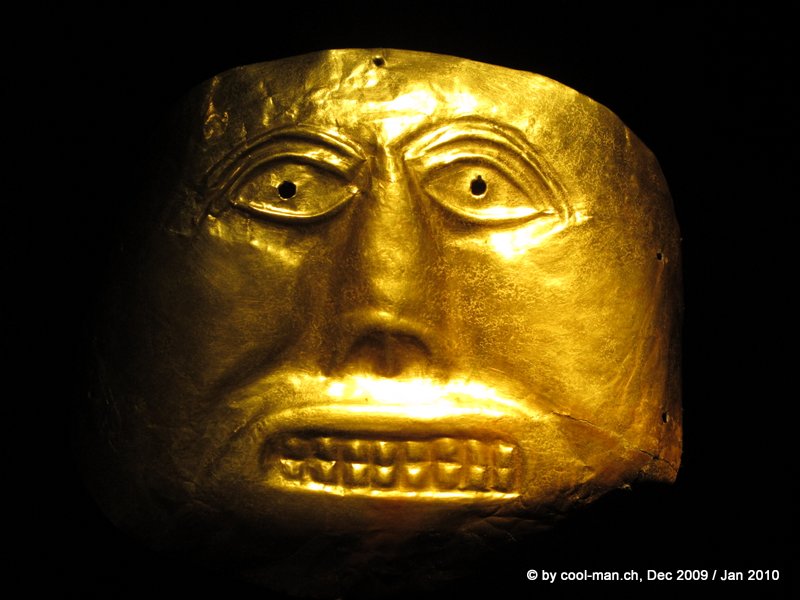 The salt cathedral of Zipaquirá

An excursion to a salt mine, where the workers had carved a cathedral from the salt rock underground in honor of the patron saint of salt miners, rounded off the visit to Bogota. 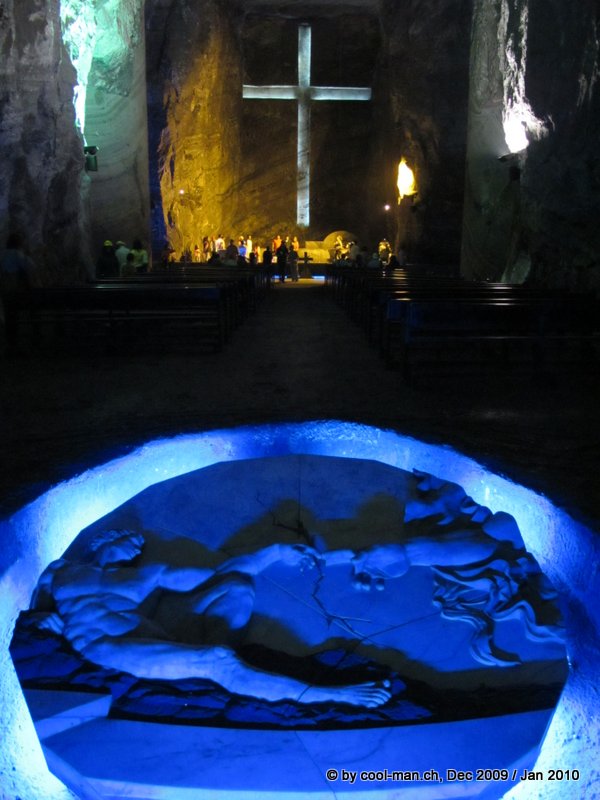 After a month in Colombia I flew back to Buenos Aires. What a difference! The same evening I enjoyed once again one of the world’s best steaks, as you can only find in Argentina.

I spent the next three days in Uruguay.