For a long time I wasn’t sure where I was going after my stay in South Africa. Madagascar, Mauritius, the Seychelles, a combination of these islands and Jordan were the possibilities. The Federal Department of Foreign Affairs warned of crime and political tensions and demonstrations in the run-up to the presidential elections in Madagascar. In addition, Madagascar’s roads are in poor condition. Meanwhile, Mauritius has so many cars that there are traffic jams every day on the ring road around the island. With the Seychelles I was not sure whether I was out of place as a single traveler among all the couples in love.

I remembered a German couple I met in the Philippines who told me that they were in the Seychelles. They dispelled my doubts and were able to give me many valuable tips. Ten days before my departure I contacted the hotels/restaurants in the Seychelles. After I had secured the overnight stays, I booked the flight from a lodge in Kruger Park six days before departure and a rental car one day before departure, as usual with Thrifty Rent-A-Car, after I made a big profit with shares of this company. I like to give something back.

I didn’t get to the Thrifty office at the airport of Mahe, the main island of the Seychelles, until after 8 pm. The Thrifty employee John and his girlfriend were already waiting for me and gave me the car. After I told him that I wanted to go to my hotel and asked him for some directions, he spontaneously offered me to drive his car in front of me, even though he actually lives in the opposite direction. He wasn’t sure if I would find the hotel because it was already pitch dark. I accepted the offer. After thirty minutes driving to the hotel I was glad that John had shown me the way, because I would not have found the hotel immediately. John picked up a bottle of liquor from his car and offered me a sip and then another. No wonder this company has so much value with this customer service!

The hotel was on Beau Vallon Beach in North Mahes. The beach is long and wide and ideal for swimming and jogging.

The next day I explored the capital Victoria. Victoria consists of a few streets and has no tourist highlights. A two meter high copy of Big Ben in London is already an attraction. Another one is the market where you can see big fish. There is also a modest National History Museum, which you have seen in ten minutes. My most important visit was to the office of the largest telephone company in the Seychelles, Cable & Wireless, to buy a SIM card for mobile internet access. I buy it in every country, but in the Seychelles it was the only way to get affordable internet access. Free Internet (incl. WIFI) is nowhere available, on the contrary. Eight Euro and more per hour are the rule.

In the afternoon and the next two days I explored the island by rental car.

The first thing I noticed was Eden Island. On this artificial island 450 luxury houses with boat kick-off will be built. According to the original plan, the construction work should have been finished a long time ago. Because of the financial crisis, the sale of the houses was delayed and accordingly the completion lags years behind the original plan. The buyers, mostly South Africans, receive a settlement permit and over time a Seychelles passport. The houses are often bought through company structures, which can also be used for tax optimization. Since many properties have several owners via time-sharing, concerns arose in the Seychelles about the eligibility of these potentially numerous new citizens to vote.

Unfortunately the weather on Mahe was cloudy all the time, so I could not take nice pictures of the beaches of this island. I visited the local rum distillery, whose rum cannot compete with the Cuban one. 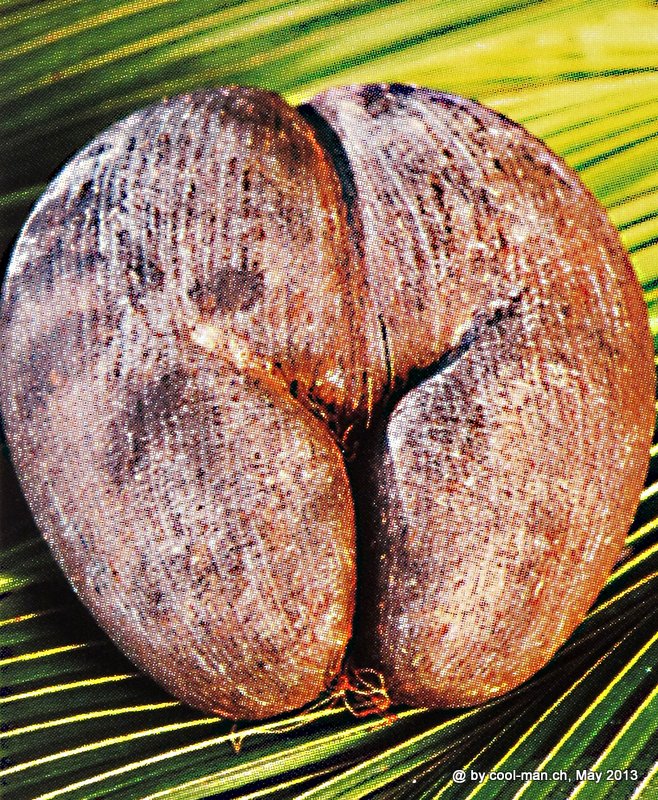 In the Vallee de Mai, a UNESCO World Heritage Site 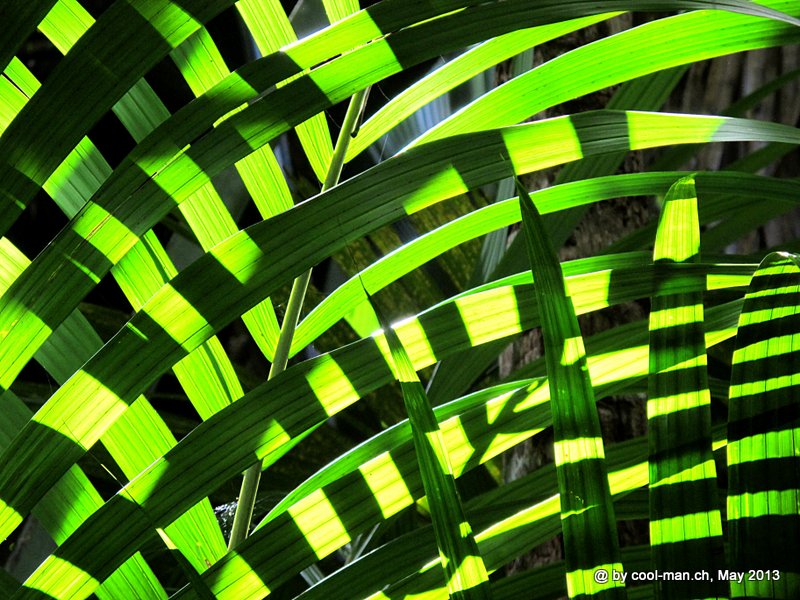 One of the most beautiful beaches in the Seychelles, Anse Lazio, can also be found on Praslin. Nevertheless, I was disappointed by this beach, as half of the beach was closed with buoys. Swimming was only allowed in this area after two shark attacks in 2011. After the first fatal incident, sixteen days later another man who was on a honeymoon died. The beach was well visited because of its popularity. For me, a dream beach is a beach where there are hardly any or no people to be found, as I can experience in the Philippines.

I spent the longest time on the third island, La Digue, which is only five kilometers long and three kilometers wide. There are hardly any cars on this small island. Residents and visitors alike use bicycles. 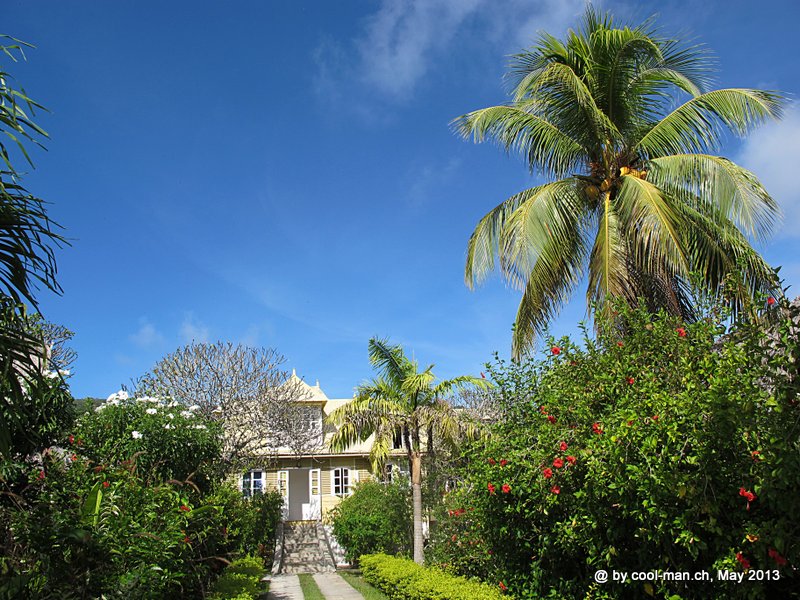 Some beaches, called Anse here, of this island are considered the most beautiful in the world. The combination of round rock formations, fine sand and crystal clear water make these beaches unique to the eye. Unfortunately, massive waves and strong currents make swimming impossible on most beaches.

The most beautiful beach, Anse Marron, can only be reached with a guide after a two-hour hike, during which you have to wade through the water and climb over stones. This is a deterrent to most people, so that only a few people visit this beach. 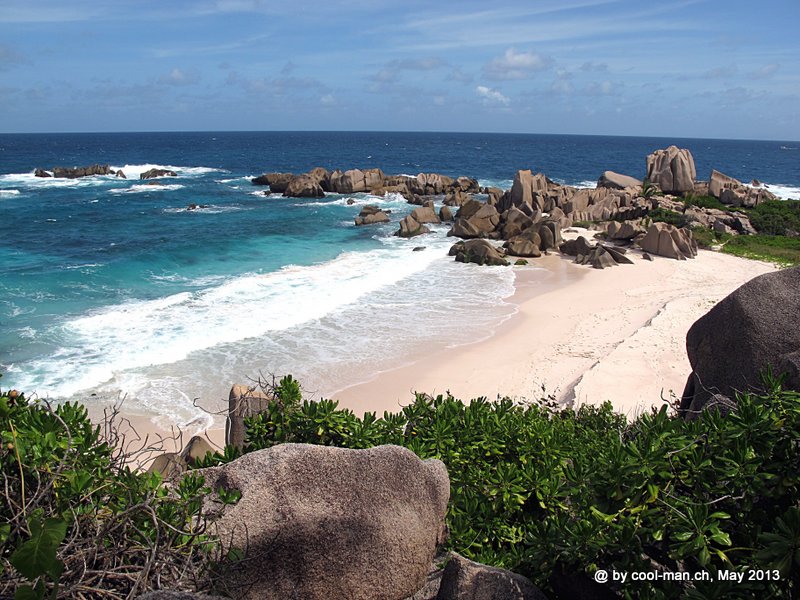 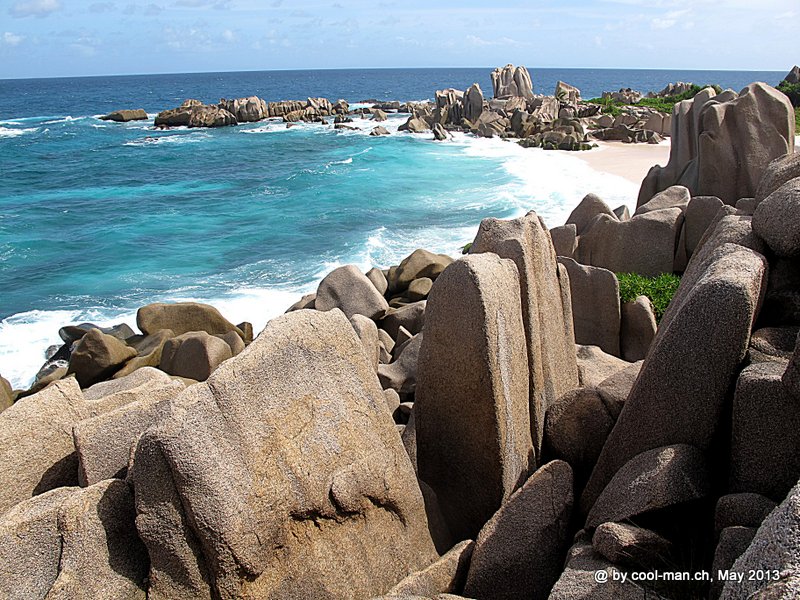 Our tour guide and cook Robert, who led our group to Anse Marron beach on La Digue. 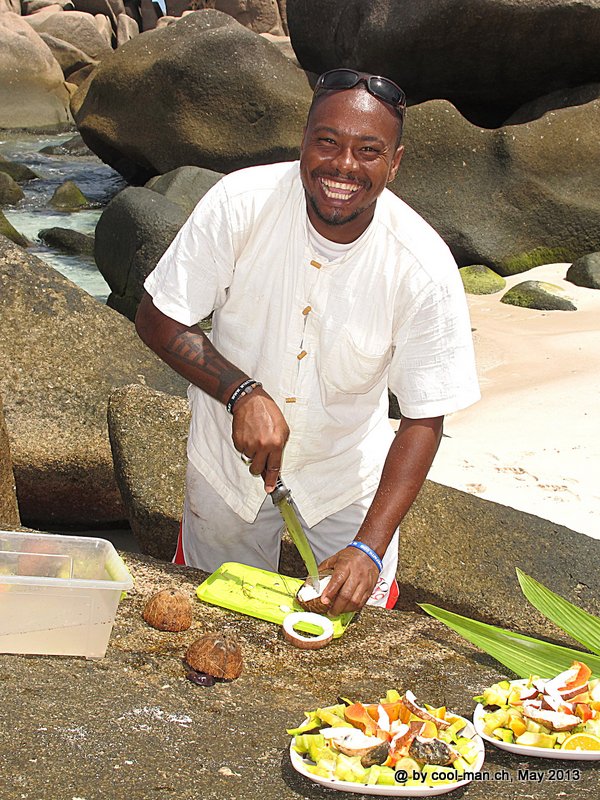 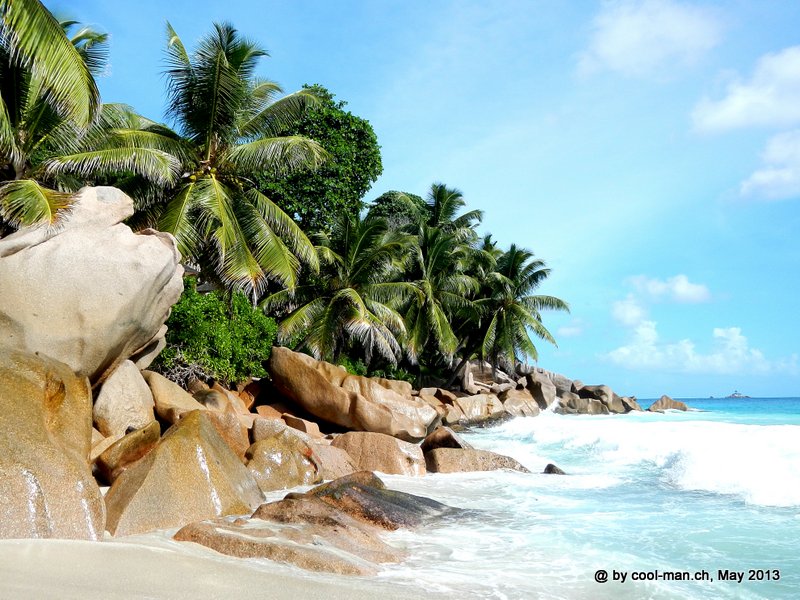 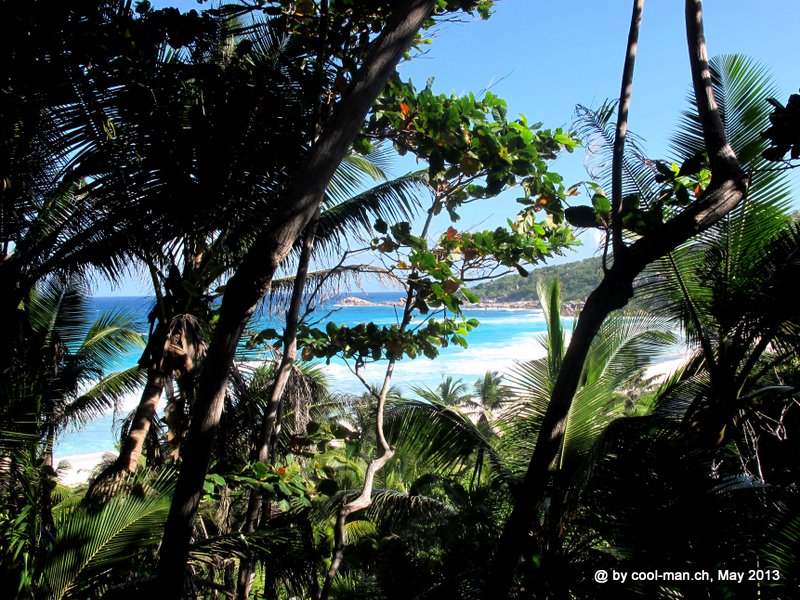 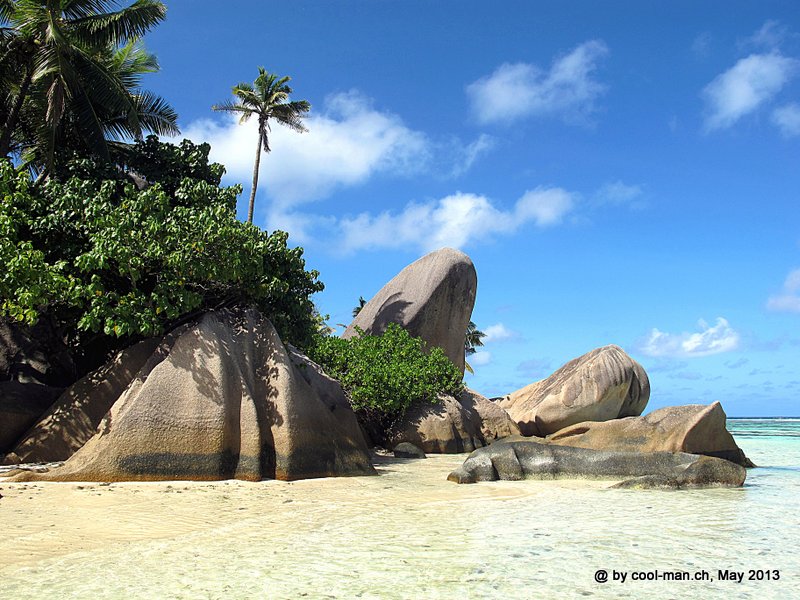 Since the inhabitants live from tourism, hardly any fishing is done. Therefore you can see big fish and turtles while snorkeling.

The islands of the Seychelles were covered with giant turtles in the past. Unfortunately, most species became extinct because they were easy to hunt. They were also popular with seafarers, as the turtles survive several months without water and food and were therefore a welcome source of fresh meat on board. Only on a remote archipelago in the Seychelles can you still find wild tortoises.

The Seychellois, as the inhabitants of the Seychelles call themselves, are very nice and generous people. At the departure at a hotel, the receptionist and I forgot that I had to pay some beers and water. Later I noticed it and called the hotel to charge my credit card. The nice lady said that it was okay and I didn’t have to pay anything. At another hotel, a hotel employee explained to me that she had mistakenly told me the price for two persons when booking. The single room price was then a lot lower. Worth mentioning is that there is a brewery in the Seychelles. Besides two refreshing lager beers, Guinness is brewed under license. Since Guinness beer is one of my favorite beers, it was very convenient for me.

As the photos show, the beaches are rightly considered to be the most photogenic in the world.

I have been in Jordan for more than two weeks now. As the last country on this trip I will visit Israel before returning to Switzerland at the end of June.