The travelogues of my two previous trips to Argentina contain many descriptions which I will not repeat. It is therefore worthwhile to look at them again. They can be opened with the two links below. I visited Bariloche already in 2009/2010.

Actually I wanted to visit the Puyehue National Park in Chile before my trip to Bariloche, Argentina. As rain and fog was forecasted for the next few days, I changed my plan at short notice and traveled to Bariloche in Argentina via an Andean pass earlier than planned. Here the sun was shining again.

I already knew Bariloche from my visit in 2009 and I remember the blue lakes and the great views well. This time I wanted to take more time to visit San Martin de los Andes and Villa La Angostura, too.

Bariloche lies on the widely ramified Nahuel Huapi lake. There are other smaller lakes nearby. From the mountains you can enjoy impressive views over this fantastic lake landscape. In Switzerland, the area is closest to the Engadine, with the difference that there are more lakes and views.

On the advice of the Bed & Breakfast owner, I made a short hike to the Cerro Campanario, from where I could enjoy one of the eight most beautiful panoramic views of the world according to National Geographic. And indeed, the view was overwhelming. The strong wind and the many people who came up to the mountain by chairlift had a slightly negative impact on the experience. 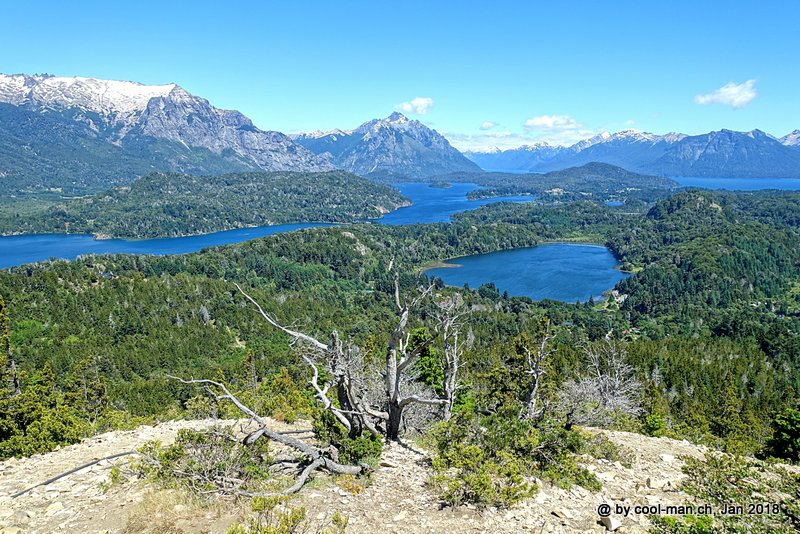 On the last day of the year I climbed Cerro Llao Llao. The starting point was the five-star Llao Llao Hotel. 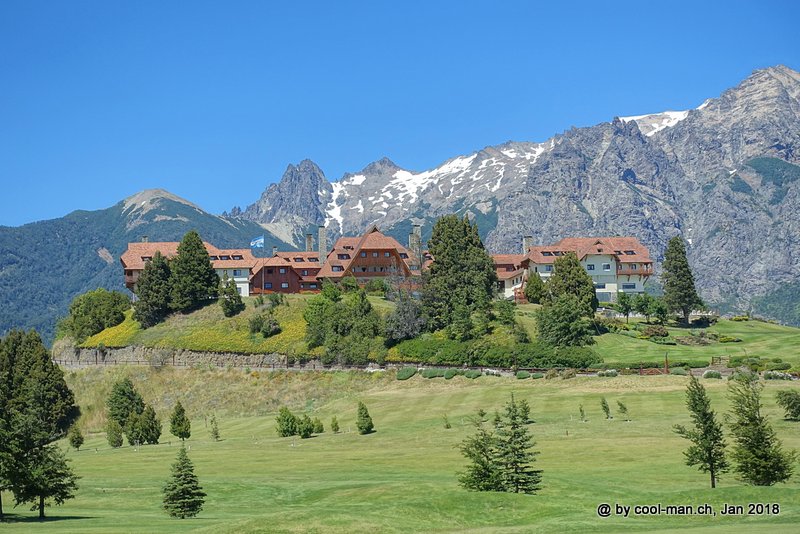 The panorama of this mountain impressed me even more. Moreover, only a few other hikers were to be found here. The intense blue of the lakes contrasted with the green of the forest. Thanks to the good long-distance view, even far-away details were easy to spot. A magical place! 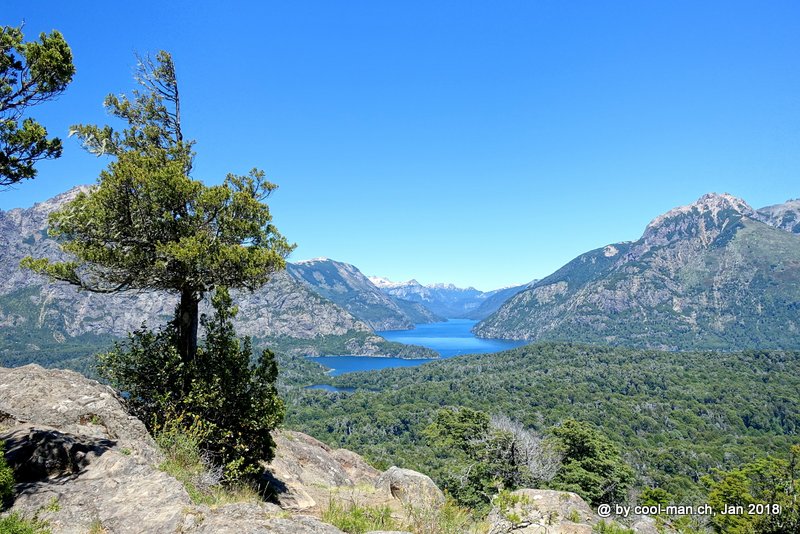 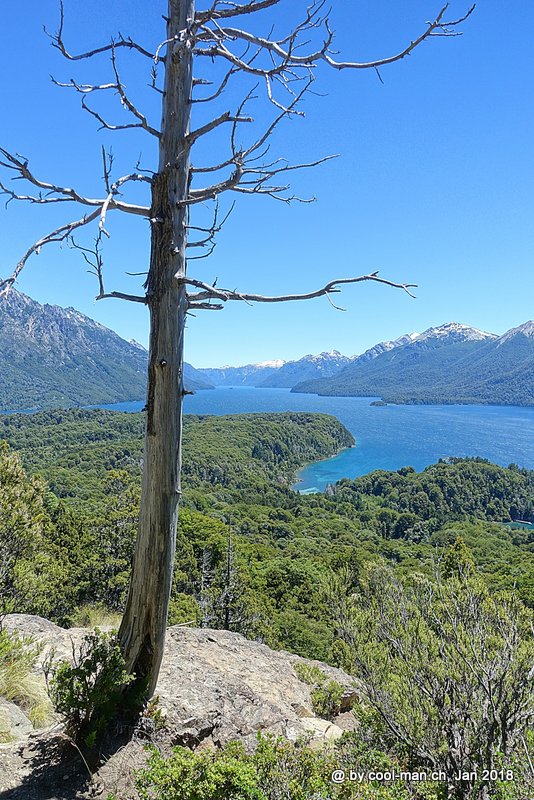 I went on to Villa Tacul Beach, where the locals swam in spite of the cold water. Here you can also find some Arrayán trees, which stand out with their red spotted bark. These trees are abundant in this area and can live up to 600 years. 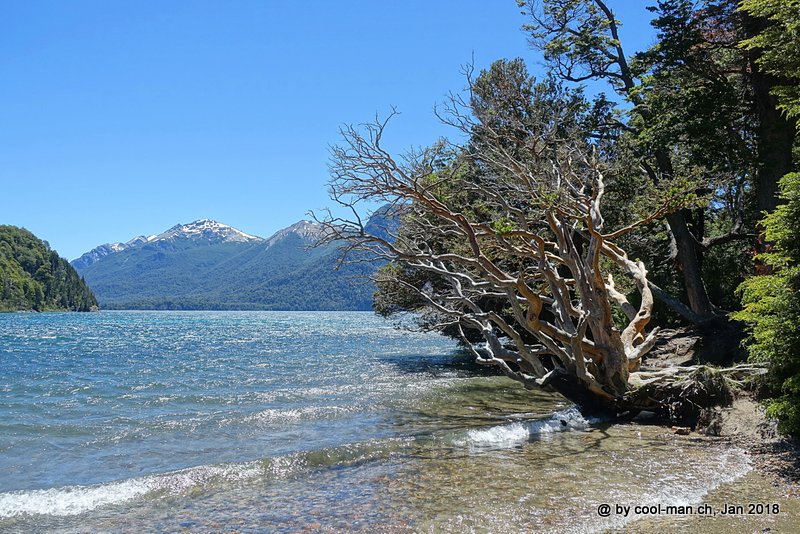 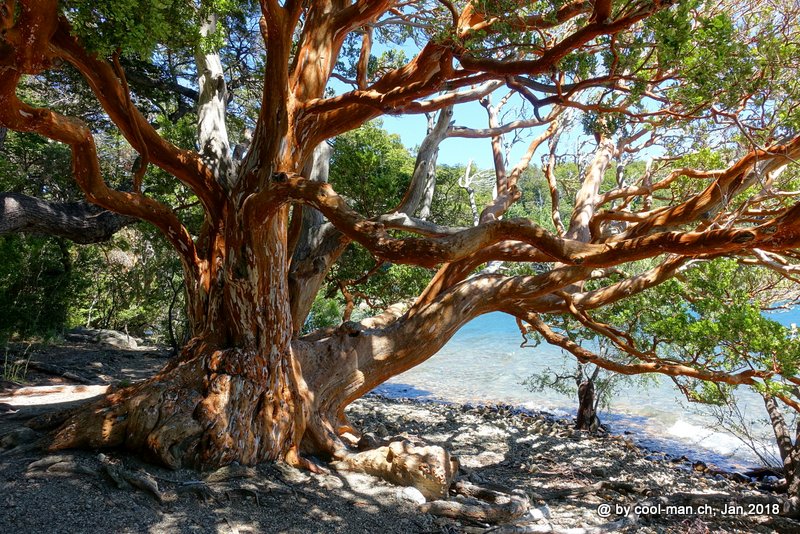 I almost had to finish the year starving, because I was surprised that on New Year’s Eve in touristy Bariloche almost all restaurants were closed. The few open places were already fully booked. After an hour-long walk through the city, I found an open steak house that I would not have visited on another occasion. The landlord told me that he would close immediately and that he could not accept any more orders. At my request and my suggestion that I would eat quickly and otherwise have to finish the year starving, he said that he would discuss this with the kitchen staff. I got a steak and he gave me even more time. After all, I wasn’t the last guest to leave the restaurant.

On the 1st of January I was already early on my feet, because I wanted to hike to the Refugio Frey in Nahuel Huapi National Park in four hours. According to the timetable, the bus should go to the ski resort Catedral, the starting point of the hike, every day, i. e. also on 1 January. This information turned out to be false. I finally drove to Catedral with an Austrian in the car of an employee of the local bus company.

The Refugio, a mountain hut, is situated at the edge of a mountain lake and at the foot of a valley surrounded by rugged mountains. No wonder, this area is a climbing paradise! Here too, I wanted to stay as long as possible before starting the inevitable descent. 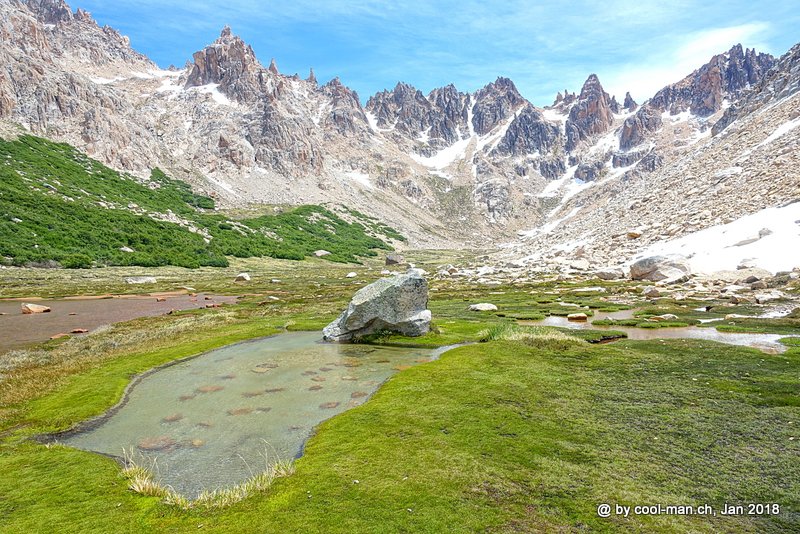 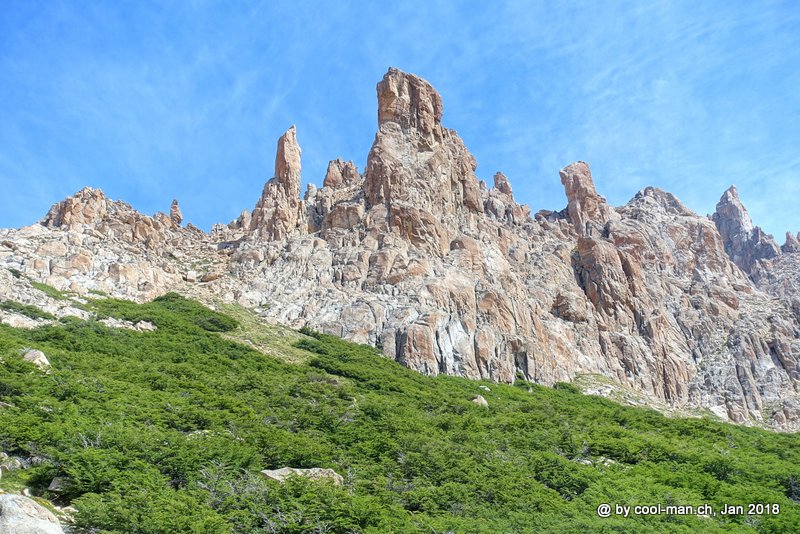 For the next few days, there were forecasted heavy rainfalls and even storms in Bariloche. I wanted to go back to Chile, but also there the weather was not suitable for my planned hikes. I studied the map and the weather forecasts of various places. The next bigger city in Argentina was Neuquén 440 km away. The weather forecast was good. When I read in the travel guide Lonely Planet that three wineries can be found “just out of town”, the decision was quickly made. The next day I was already on my way by bus to Neuquén. The vineyards were then 65 km outside the city. Distances are relative in Argentina.

Thanks to his Swiss ancestors, an employee of the hotel in Neuquén was also a Swiss citizen. However, he did not speak German and has never been to Switzerland. He proudly showed me the tattoo of Habsburg Castle on his forearm that showed that his ancestors came from the canton of Aargau. Too bad I didn’t take a picture of it.

The next day I visited the two wineries Schröder and Fin del Mundo. I had an excellent lunch at the Bodega Malma. These wineries produce several million bottles of wine per year and are thus much larger than those in Cafayate in northwestern Argentina. Quality suffers from this. I clearly liked the wines in the northwest much better.

The winery of the Schröder family, who emigrated from Germany, consisted of a modern visitor center and an informative tour. The restaurant is famous. A wine line is called Saurus because dinosaur bones have been found on the vineyard grounds. 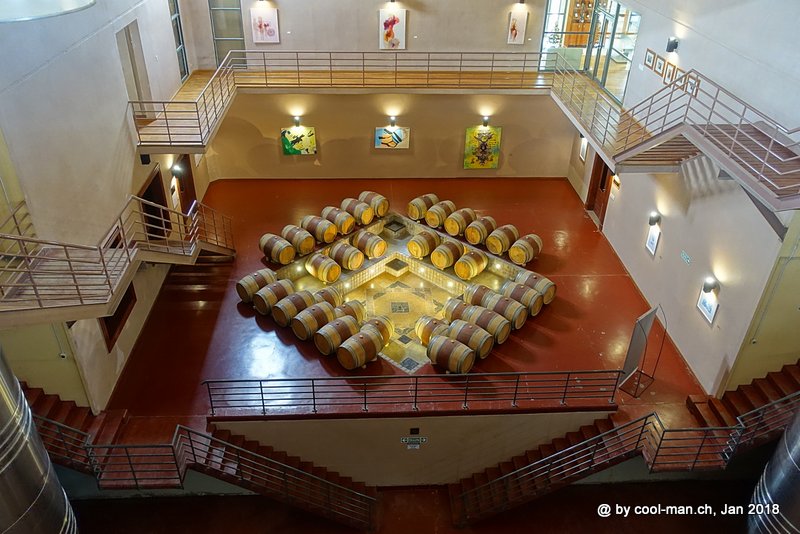 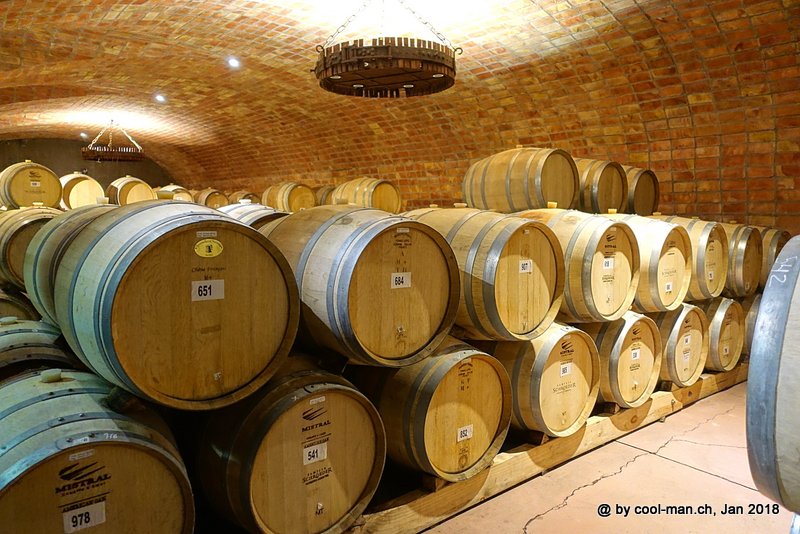 The Fin del Mundo estate was even bigger and more modern. 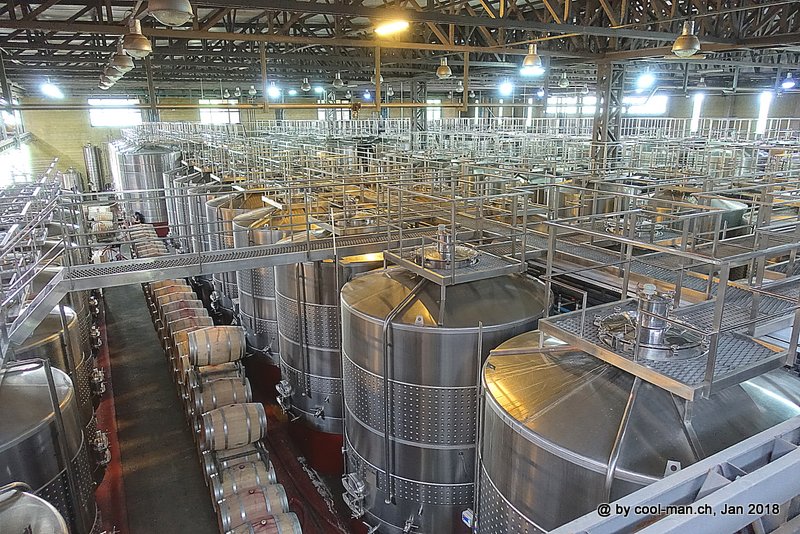 Since there was nothing else to see in Neuquén and the weather in Bariloche showed itself again from the friendly side, I returned to Bariloche the next day, where I planned my onward journey to San Martin de los Andes.

From Bariloche you can reach San Martin de los Andes via the beautiful 190 km long Seven Lakes Route, which, as the name suggests, leads past seven lakes. It is a small town on Lake Lácar, which lives mainly from tourism. I’ve done some hiking. The most beautiful one is to the viewpoint Bandurrias over Lake Lácar. 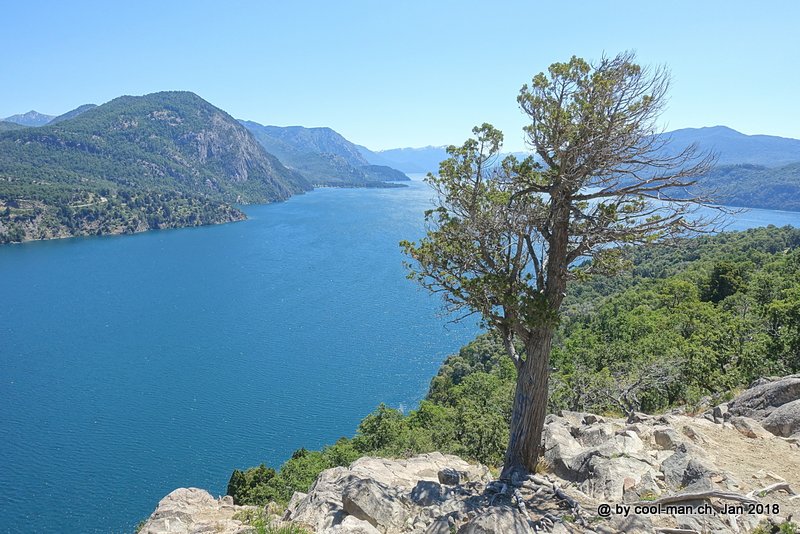 Another hike led me to the Cerro Colorado, whose summit was littered with flowers. 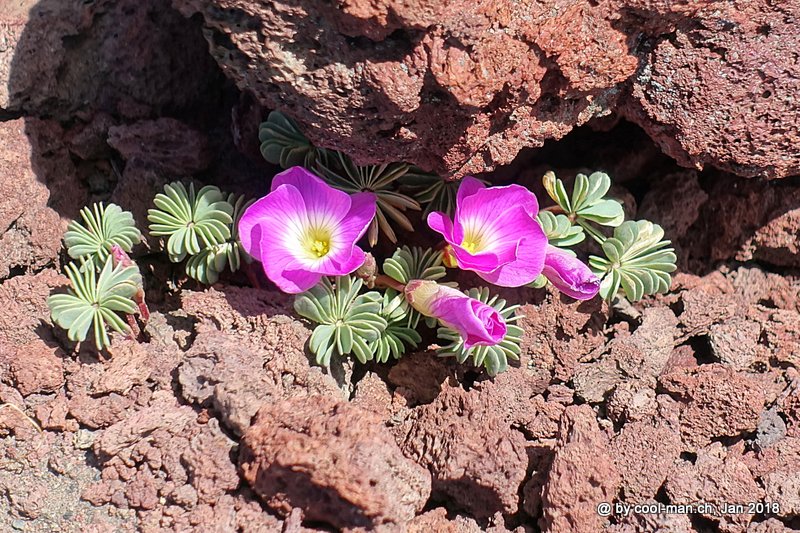 My last stop in Argentina was the tourist town of Villa La Angostura, situated on the same lake as Bariloche, Nahuel Huapi Lake. This place is famous in Argentina because President Macri is a regular guest here. The main attraction is Los Arrayanes National Park, a 12 km long peninsula with centuries-old Arrayán trees. The walk through the park offers great views of the lake and mountains. 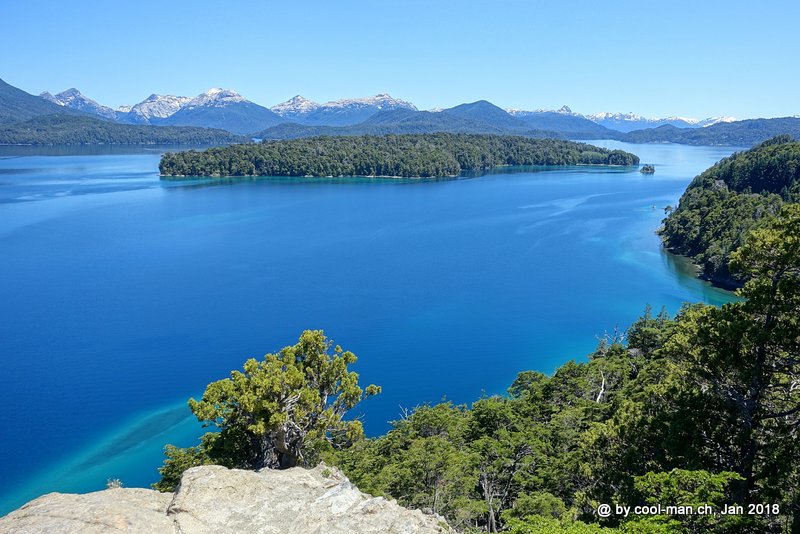 Afterwards I took the bus across the Andes through the Puyehue National Park back to Chile.

The area around Bariloche was more expensive and due to its southern location cooler than in the northwest. In the evening I put on a light sweater. On the day, however, the T-shirt was the right clothing. The Argentine summer holidays began at the beginning of January. Then it became more difficult to find suitable accommodation. Countless students were on the way with their backpacks and tents and occupied the many campgrounds.