This website contains the 3rd part of my journey through India and describes South India with Mumbai, Goa, Hampi, Mysore, Wayanad, Kerala and Kollam. At the end you will find some thoughts about this trip to India and about the religions encountered.

The first two websites about India are:

With the night train we traveled on to Mumbai. We arrived only a few days after the terrorist attacks on November 26, 2008. Several targets in the city were attacked, including the Taj Mahal Palace Hotel ( in the picture below). 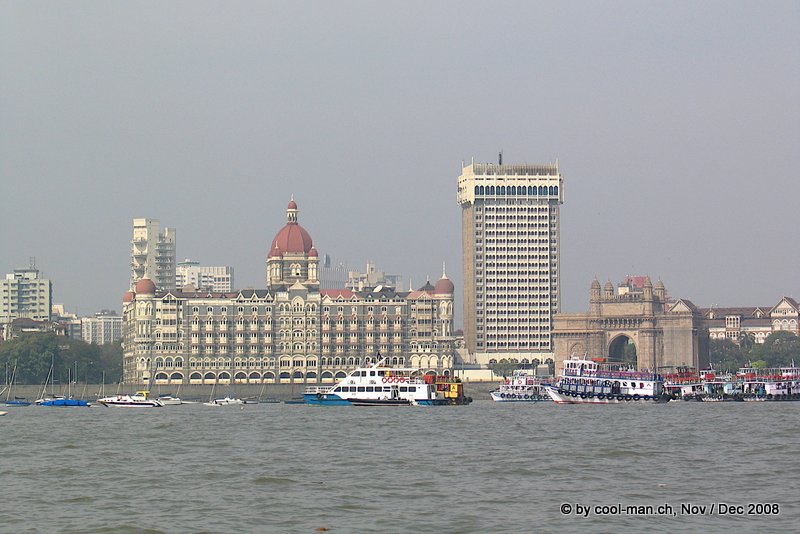 Our hotel was just a hand grenade throw from the Taj Mahal Palace Hotel. After the attack we considered the situation safe and so it was. We could still see the traces of fire on the Taj and also grenade impacts in a street cafe, where besides some customers also two employees lost their lives. For us Mumbai was a good opportunity to enjoy once again good western food and to enjoy alcohol (wines, cocktails etc.) and bars in 5-star hotels. 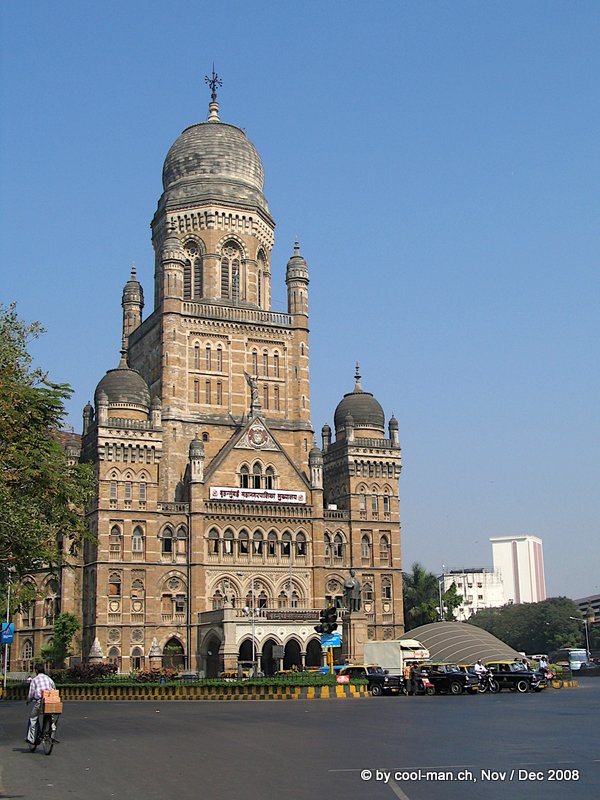 In the historical part of Goa (Old Goa) are many churches and monasteries from the 16th century, when Goa was the center of Portuguese rule in Asia. These are now protected as UNESCO world heritage sites.

In Goa I met a colleague who works as a manager in a 5-star hotel in Mumbai and whom I had met on a Philippine island. He told us some background stories of the corrupt Indian system. It fits in well with the fact that buying votes is common practice in many Indian states (between 20 and 47% of all votes are common!). So democracy becomes a farce, of course. Democracy is probably not the right form of government for a country like India with an uneducated class of poor, who make up about half of the population. It is clear that these huge sums of money handed out have to be recouped by the politicians, for example through the allocation of building projects, licenses or jobs. Poverty is not simply God-given, but a direct result of decades of mismanagement and social obstacles to development such as the caste system, superstition and outdated customs.

We were only two days at Goa’s beaches and maybe our beach was not representative. It seemed to me that many western tourists (especially English) come to Goa mainly because of the cheap flights. It can hardly be because of the beauty of the beaches, because they were not very beautiful. Many stores had Russian signs. On one beach a Russian oil tanker had been washed up and nobody seemed to be responsible for it.

Hampi is also a UNESCO world heritage site. Around 1500 Hampi was the capital of the Hindu Vijayanagara Empire and the second largest city in the world after Beijing. In 1565 the empire was conquered by a coalition of Muslim sultanates and Hampi was largely destroyed.

The most famous and oldest sight is the Virupakshya Temple, to which countless Hindus still make pilgrimages. 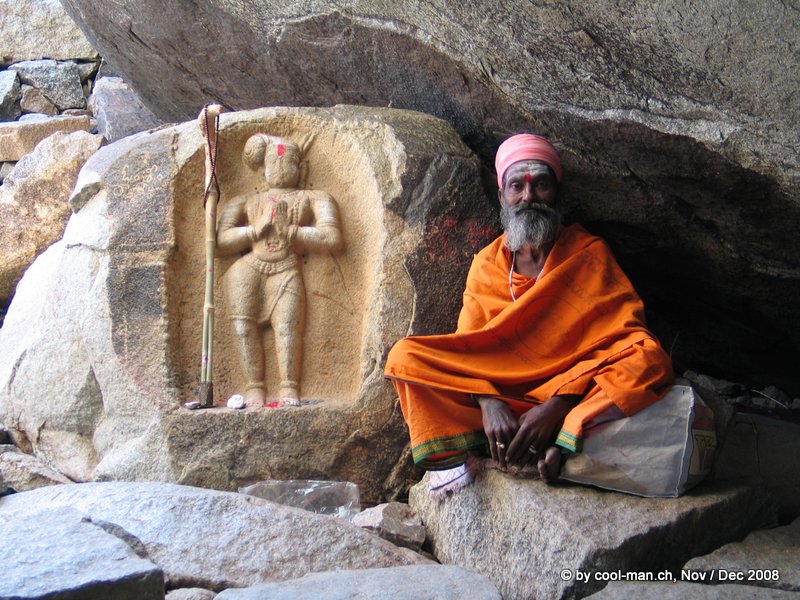 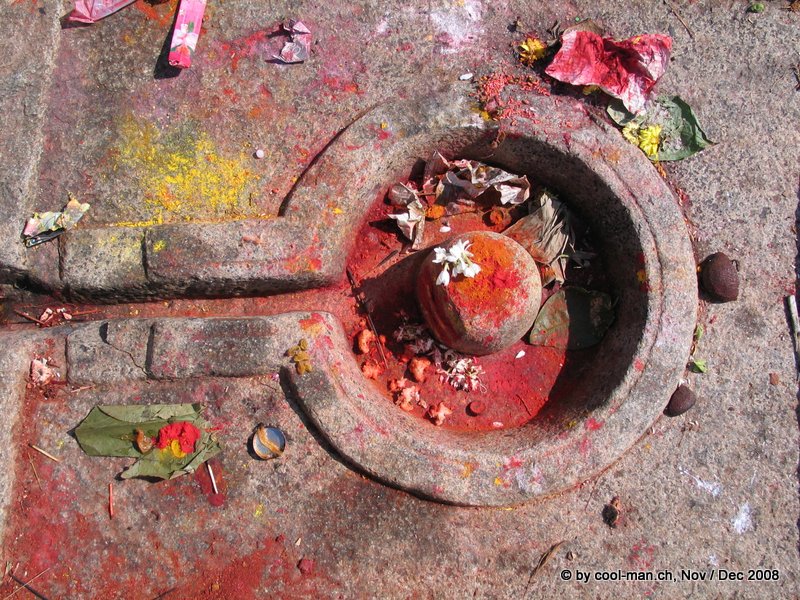 The Garuda shrine in the form of a stone cart at the Vitthala Temple. 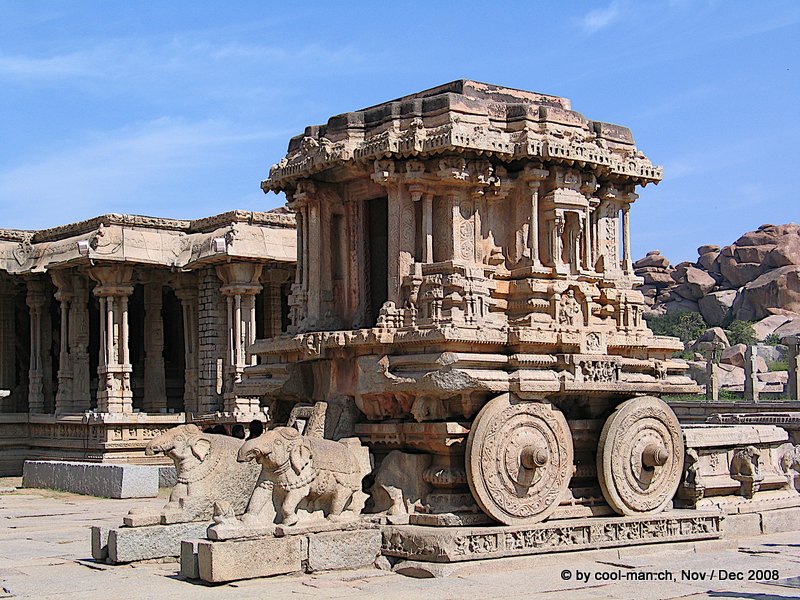 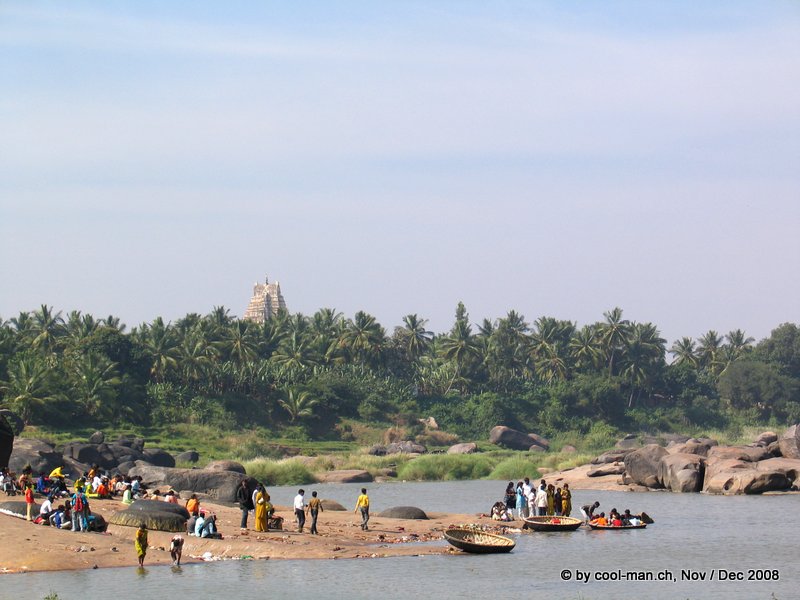 The area consists of countless large round stones that create a mystical atmosphere.

The city of Mysore served as the capital of the Kingdom of Mysore for almost six centuries from 1399 to 1956.

The Mysore Palace is the royal residence. 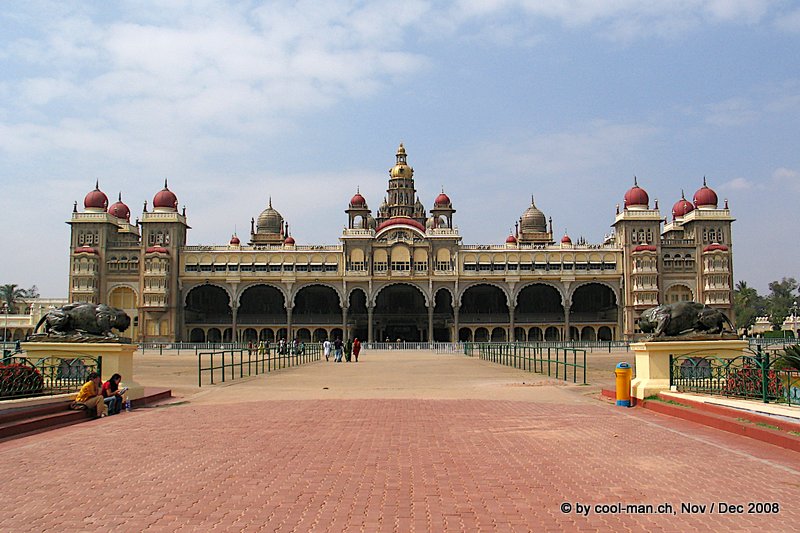 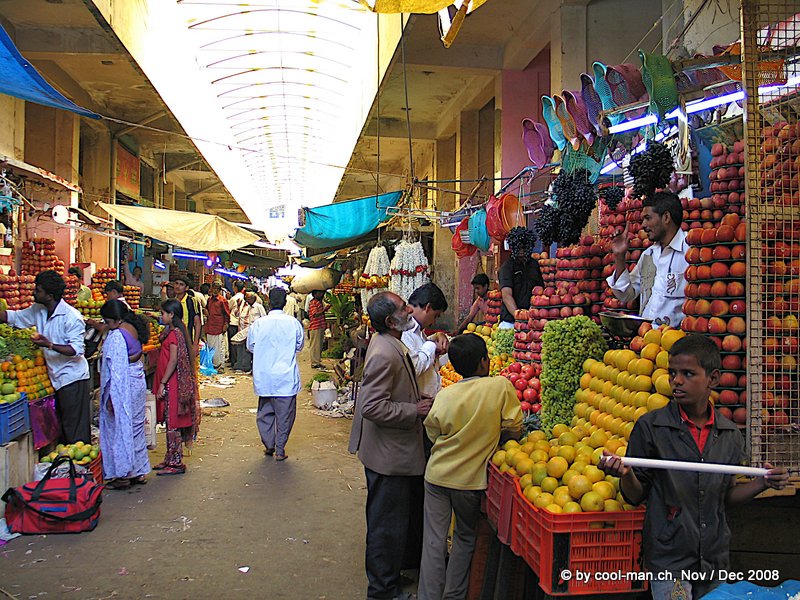 The Wayanad District is located in the mountainous area of the Western Ghats between 700 and 2’100 meters. 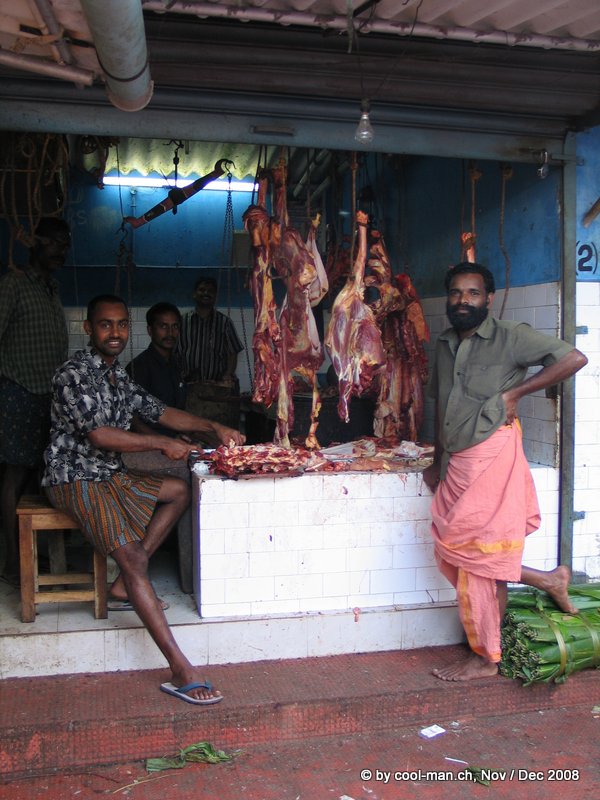 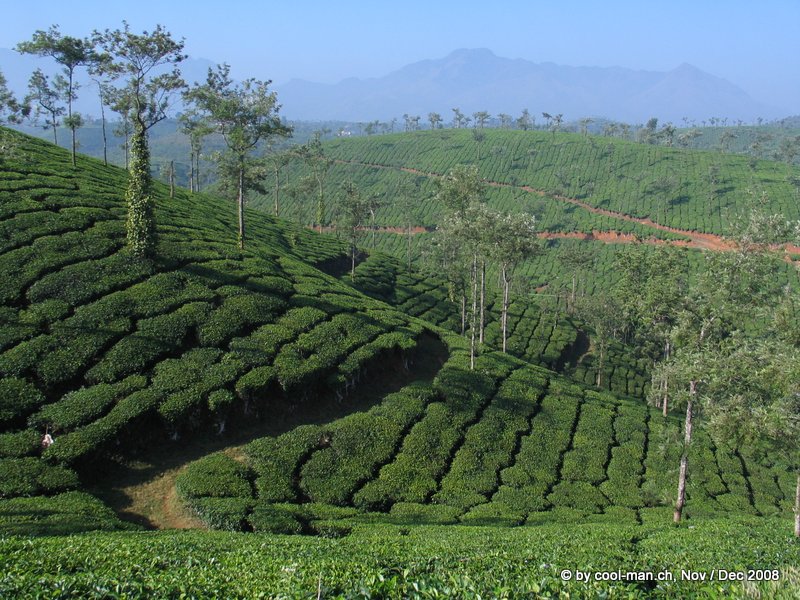 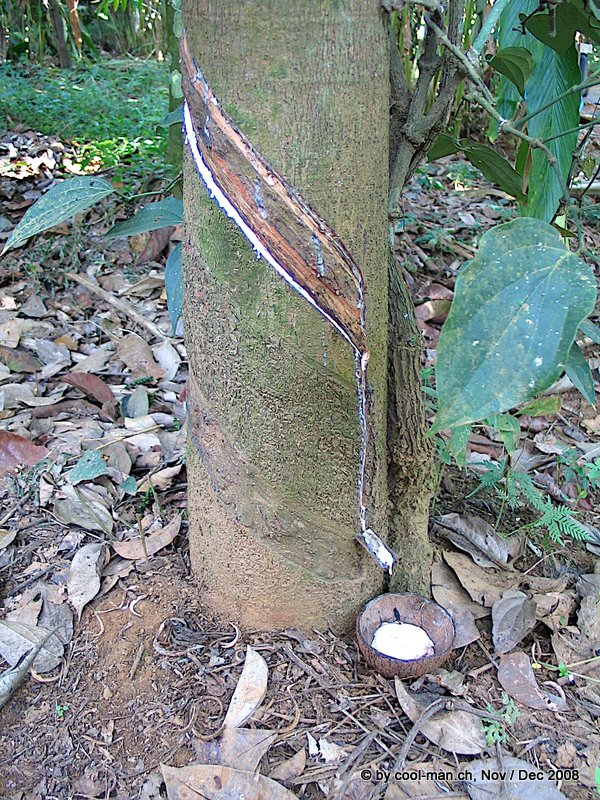 The Indian state of Kerala is located on the southwest coast of India and was the end point of my journey through India. We struggled more and more to find accommodations because of the upcoming holidays. Finally we found a small paradise on a headland in the Kollam district in the south of India, away from noise and exhaust fumes, where we took a canoe tour on canals through small villages and palm forests.

The backwaters of Kerala. The guidebook did not promise too much when it mentioned it as one of the best experiences in India. Innumerable channels wind their way through palm groves. The people stay in small villages on the waterfront and live mainly from coconuts, bananas, fish, shrimps and shells. 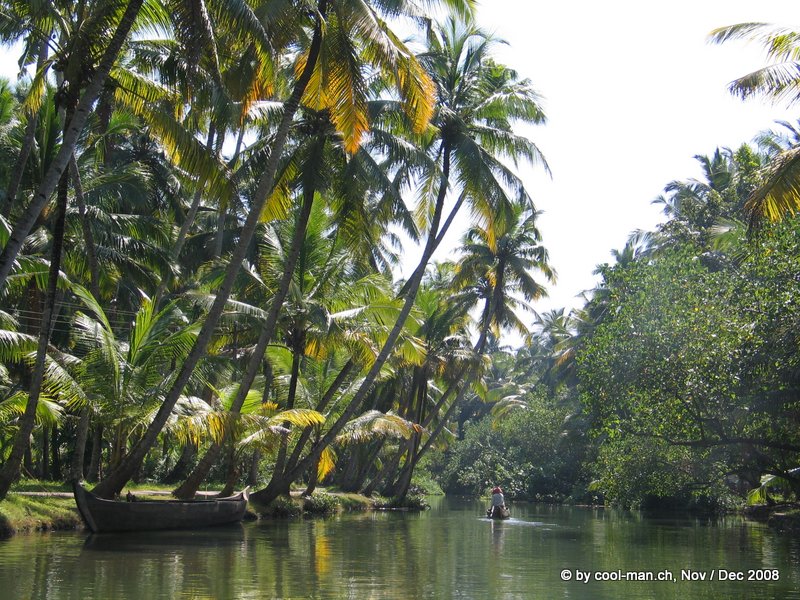 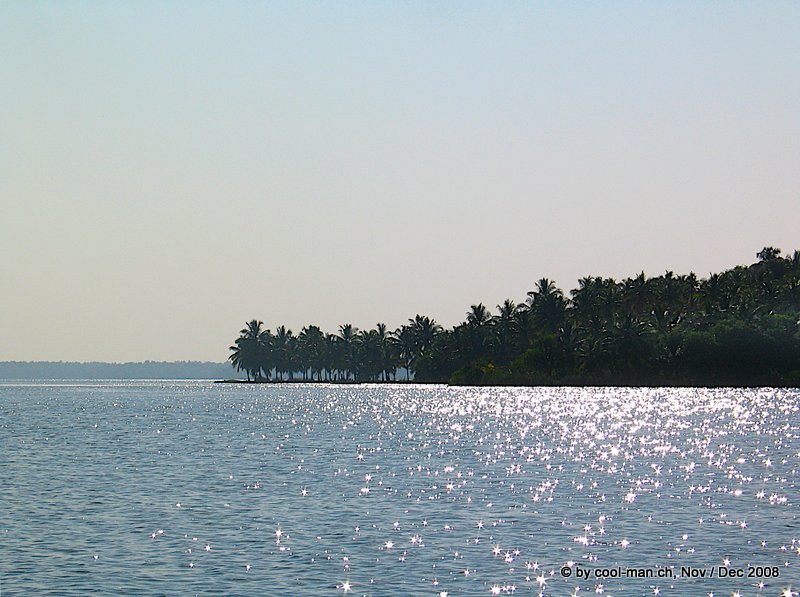 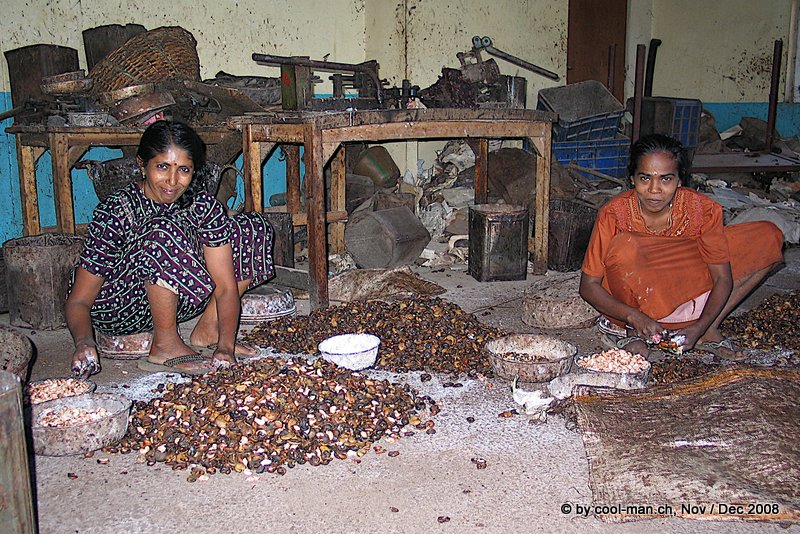 In a match factory 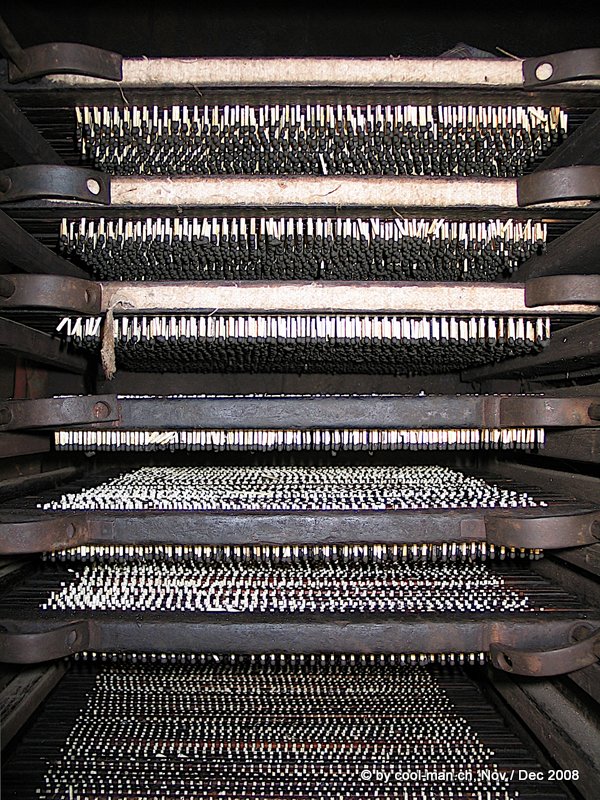 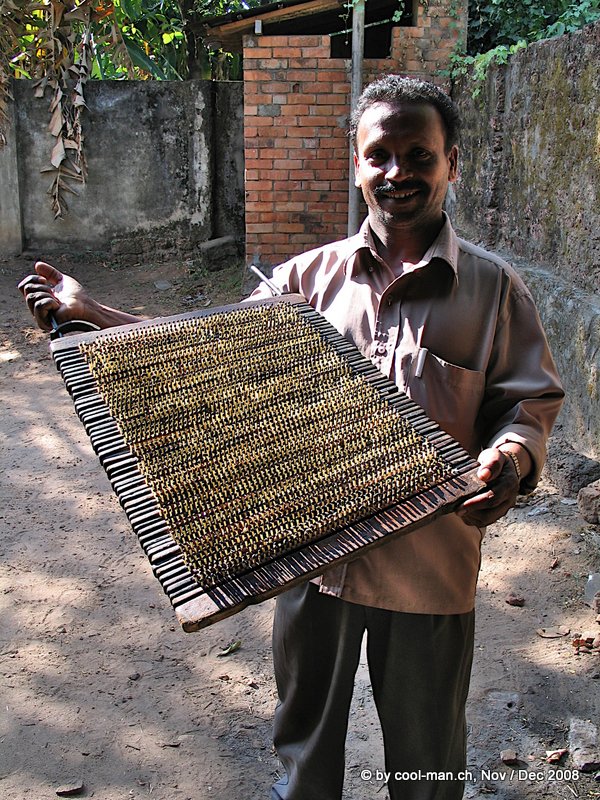 The packing of the matches into boxes is also done by hand. 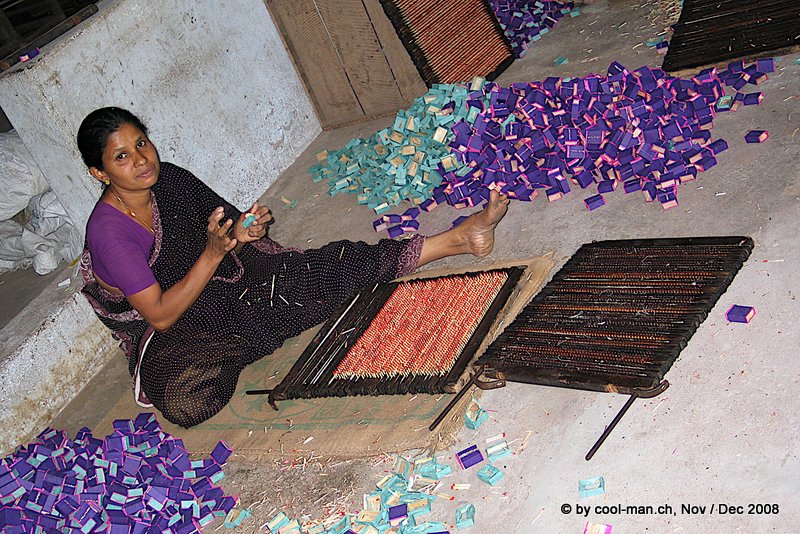 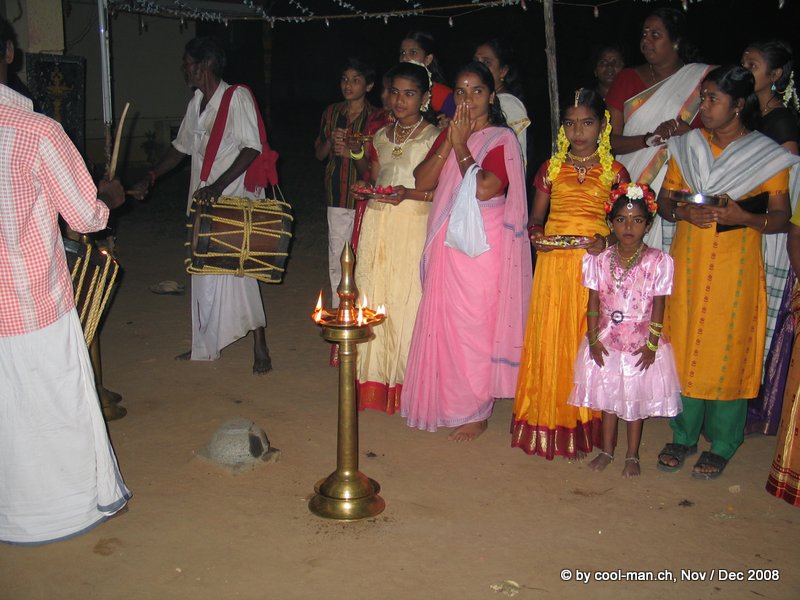 On our trip to India we got to know five religions. This are my subjective impressions:

Besides many great impressions we also noticed some negative points. Despite the hype in recent years, India has remained a developing country, with a poverty rate of about 50% that has remained the same for decades. Due to the lack of education of the many children growing up in poor conditions, this will not change so quickly. Like many countries of this kind, India has huge environmental problems. Air and water pollution and waste problems are alarming. There is also no awareness that this is a problem at all.

As mentioned above, corruption is widespread and ensures that the grievance are not addressed, as huge amounts of government money trickle away into private pockets.

Due to a lack of knowledge and carelessness, food is not handled properly, so that even when the usual eating rules are observed, one has to struggle with stomach problems.

We got to know many nice Indians who enriched our trip. On the other hand, especially in tourist areas you meet liars, cheaters and commission hunters. And not all of them are so poorly off. The nature of the tricks allowed us to draw conclusions about the naivety of the other travelers, which sometimes seemed to be boundless. The Indians are not perfection. Many Indians, be it a bus driver, a conductor or simply a fellow traveler, are not too ashamed to blatantly ask for money. This contrasts with the people in Nepal, whose standard of living is much lower than in India. The Nepalese are much too reserved to ask for money.

All in all, this trip was a complete success and brought many experiences and insights. The number of pictures alone shows how much there was to discover.