Coming from the Philippines, I spent the last month of my trip on Fiji. We associate this name with a South Sea paradise with fine sandy beaches, crystal clear water, a breathtaking underwater world and friendly South Sea inhabitants. Fiji has it all and I felt at home on Fiji.

When you leave the resorts and travel around the country, you soon notice that Fiji is a third world country with all the associated problems like rural-urban migration, high unemployment, crime, a low level of education and hardly any infrastructure outside the big cities and the tourist centers.

Fijians are half indigenous and almost half descendants of Indian forced laborers brought to Fiji by the British colonial government in the 19th century to work on the sugar cane, cotton and tobacco fields. These two groups have remained very homogeneous. Only very few marry across group boundaries. Although tourists do not notice this, there are tensions between the indigenous people who own the land and the Indians who dominate the economy. These tensions led to several coups d’état – the last one in 2006 – from which the population suffered because of the decline in tourism. Even now, the situation is unstable.

The Fijians are friendly people. That’s why you can’t blame them for the fact that despite good will, things always go wrong. Once a travel agency booked for me in a resort and I received a voucher from the travel agency. But the resort did not know anything about my booking. Another time, one booked a bungalow for me without own bathroom, although I wanted one with own bathroom and this was noted on the voucher. Of course the price was much higher and I had to pay the difference on the spot. Another time was the offered price of a travel agency on the basis of a two occupancy, although the travel agency knew that I was alone on the way. Finally, once the washed laundry was still wet at my departure time, although I was assured beforehand that the time was sufficient. Or the calculated exchange rate was worse than on the scoreboard stood. The display was just not updated yet. I was generous to the locals, because the wages on Fiji are low. Nevertheless it is noticeable that all mistakes have turned out to my disadvantage. Over time I learned that it was best to organize everything by myself and not to believe the promises of the locals. After that I had hardly any problems.

On the other hand, I have no sympathy for the fact that on the island of Taveuni a protected marine park continues to be advertised for great snorkeling and a high entrance fee is charged, even though Cyclone Thomas destroyed almost all the corals a year before and there are hardly any fish left. The village has got used to the income from the park and now wants to collect it anyway. Also the sales staff of a high-priced department store behaved unfairly and assured me that the VAT will be refunded at the airport on departure. At the airport it turned out then that I did not reach the minimum purchase quantity and therefore I received nothing back.

But now to my journey. The main airport is near Nadi, the second largest city on the main island Viti Levu. It is a very sprawling city, but its center consists of only a few streets. I immediately stocked up with some flowery Fiji shirts and a Sulu. The Sulu is a monochrome, up to the lower legs reaching skirt for men. The international jazz and blues festival took place during my stay in Nadi, so I stayed there longer to see bands from Fiji, New Zealand, Australia and the USA for two nights. 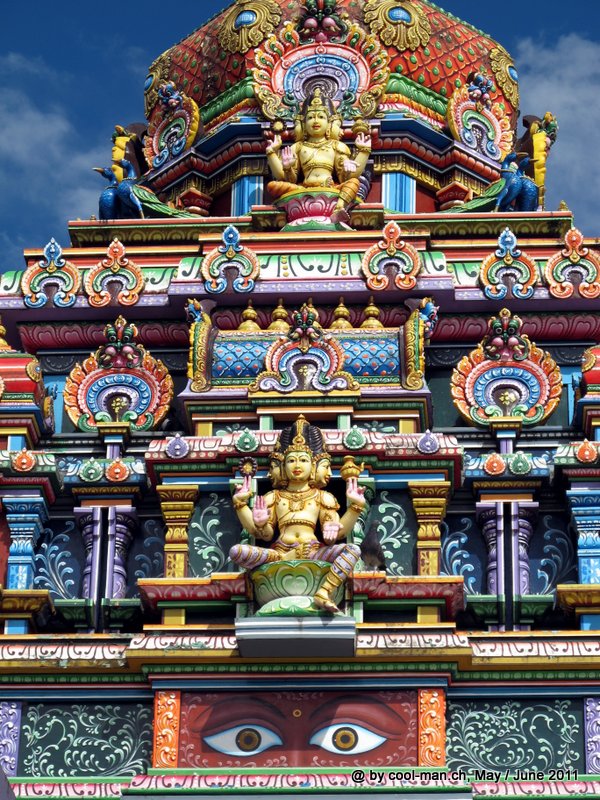 Garden of the Sleeping Giant

A visit to the “Garden of the Sleeping Giant” near Nadi is well worth it. 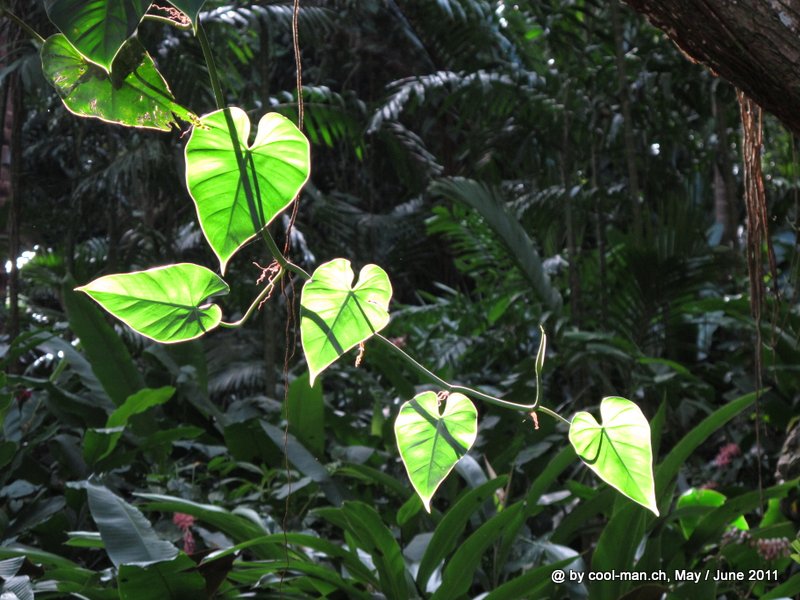 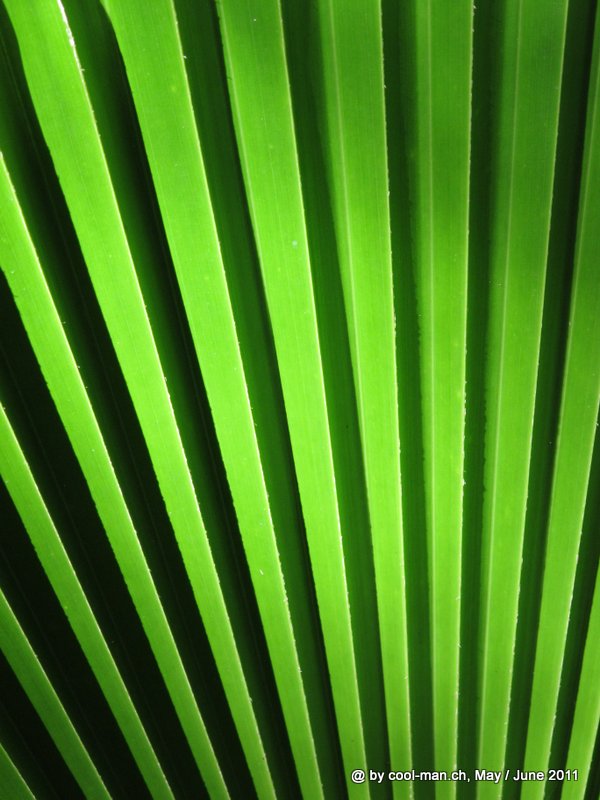 The next two weeks I spent on the island groups Mamanuca and Yasawa. Each island and each resort had its peculiarities and on each island there were also new discoveries to make under water. So I have seen hunting shoals of fish, a shark, an octopus, a water snake, several rays and an almost two meter long Baracuda.

Views from a beach walk 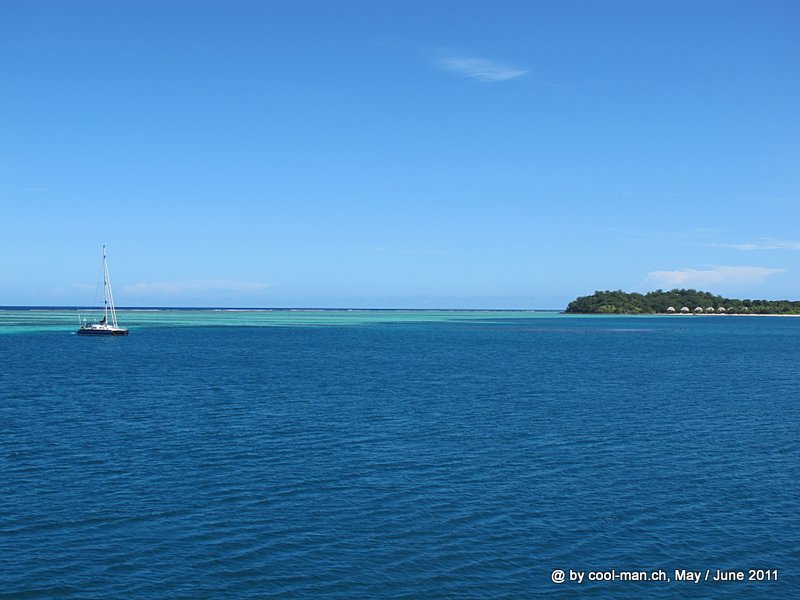 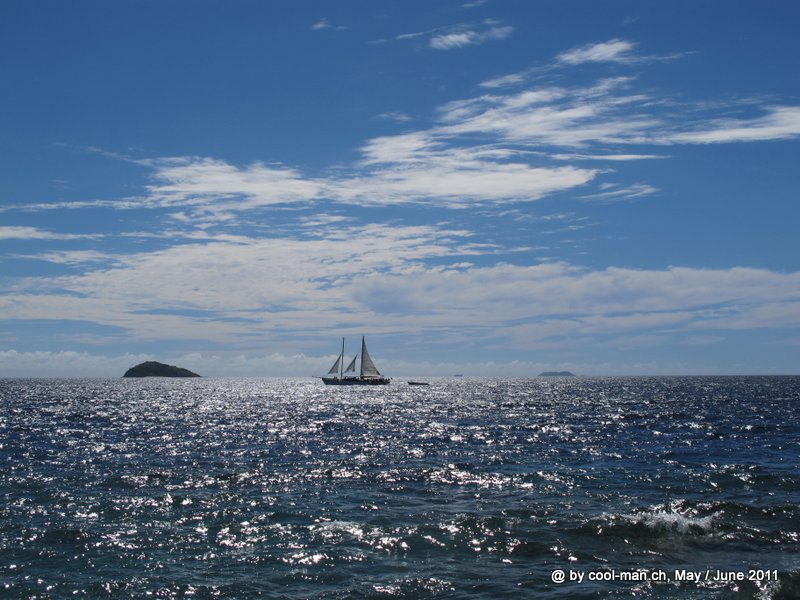 These Indian mackerels can open their mouths pretty wide. 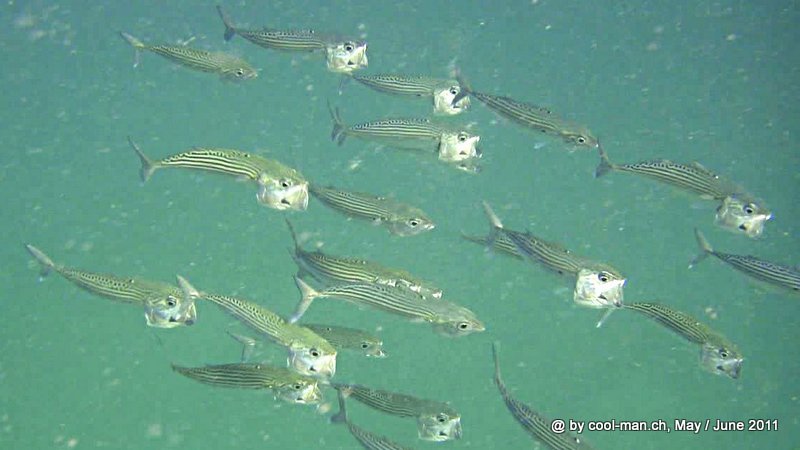 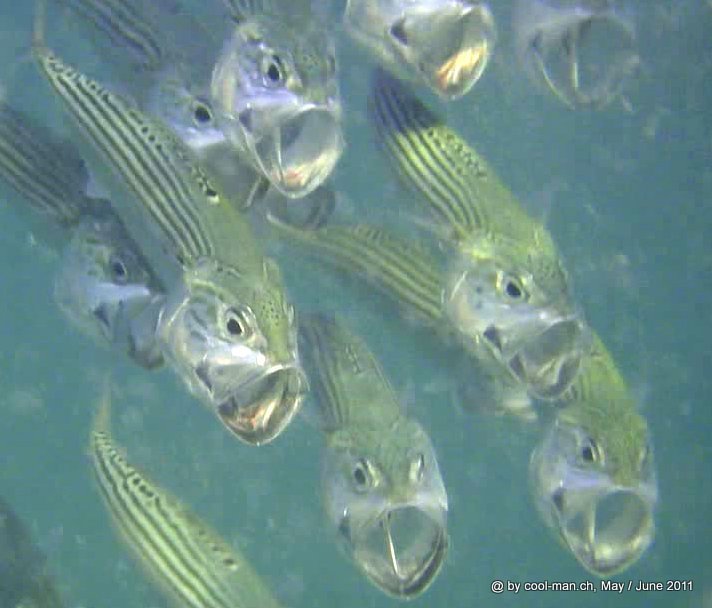 By boat from Mana Island to Bounty Island 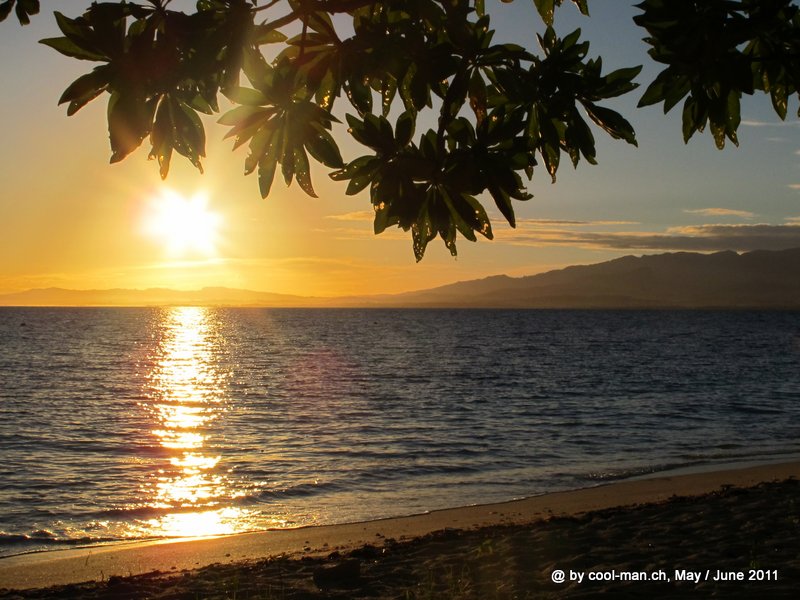 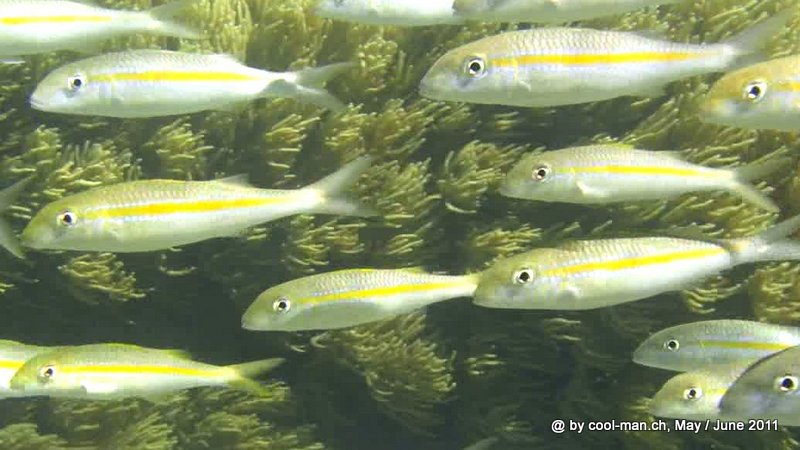 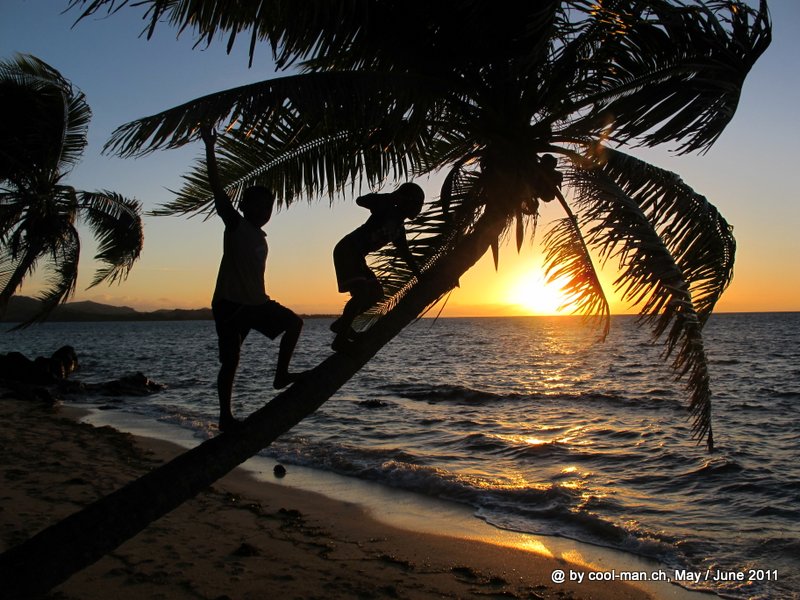 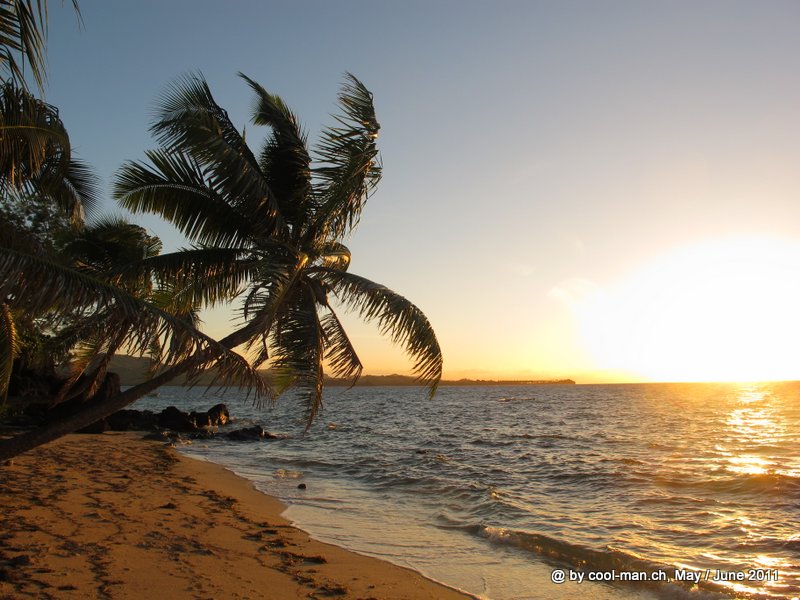 The people on Fiji are very religious. A woman rings the church bell on Sunday morning.

Two locals with the colorful Fiji shirts and the Sulu. The Sulu is a one-colored skirt for men, reaching down to the lower legs. 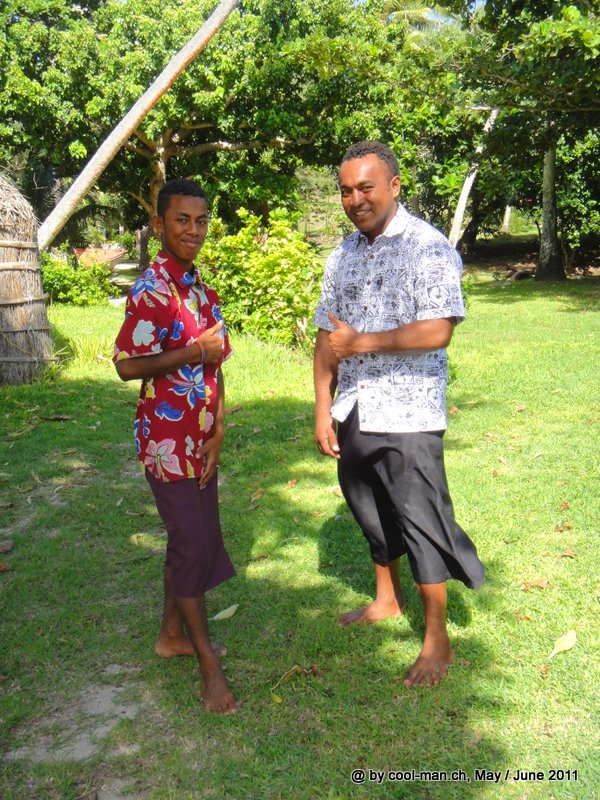 I had saved the highlight of the Yasawas Islands for the end. The island of Nacula has a long sandy beach with an intact reef that the resort had restored with the help of an American reef expert. Since the village chief is the owner of the resort, it is ensured that no local fishes there. The sea is crystal clear and light blue thanks to the sandy bottom. A view like from the holiday brochure! 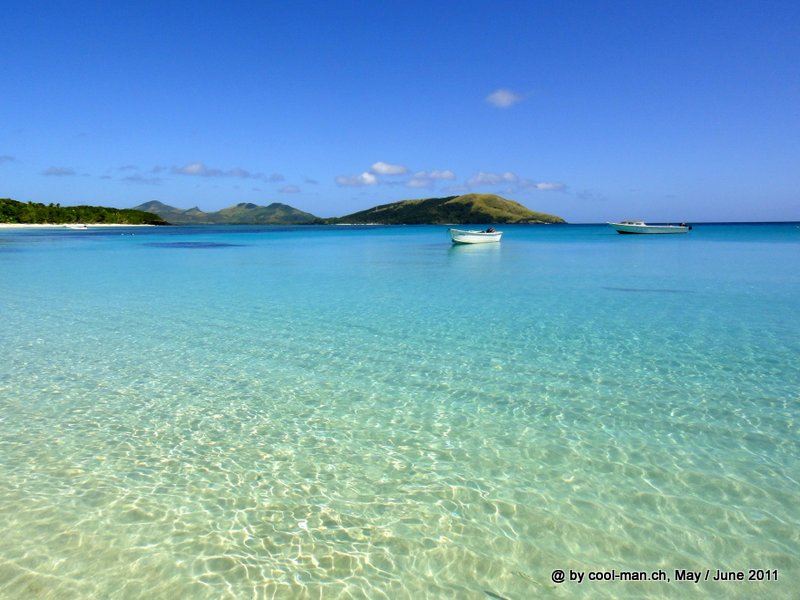 With the resort’s employees 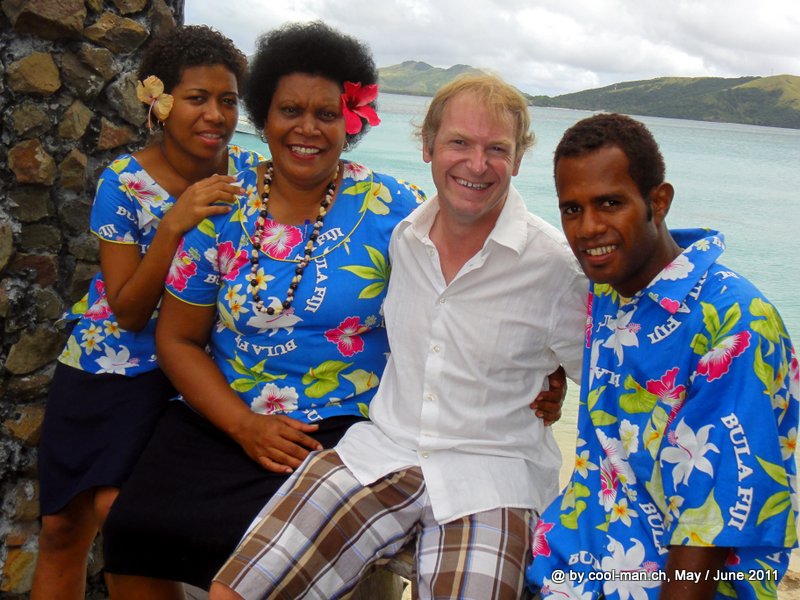 View from the hill above the resort 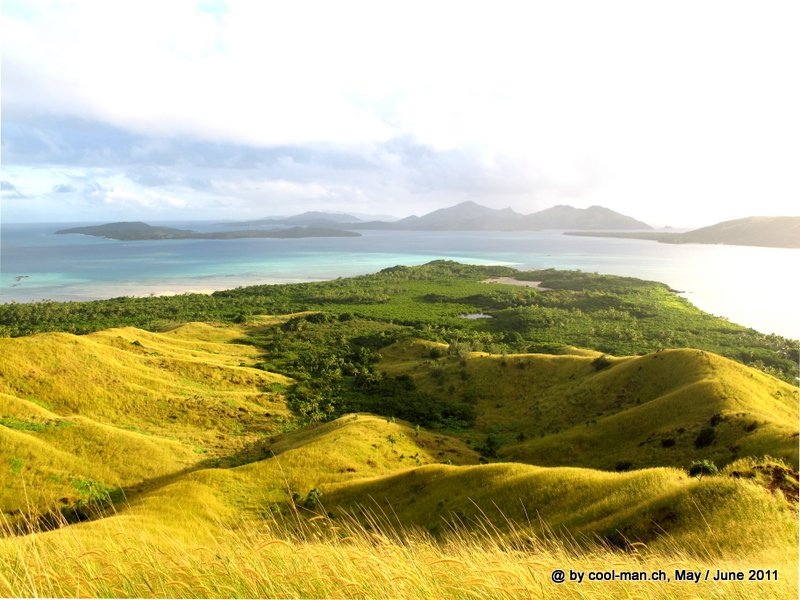 Snorkeling in the house reef 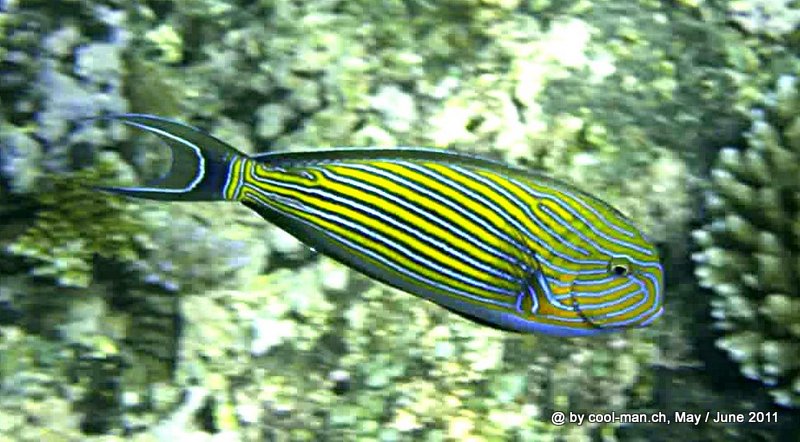 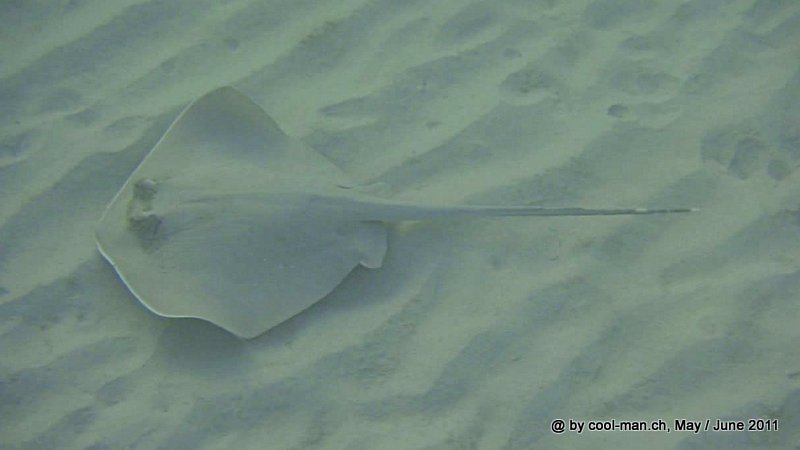 On this island the mobile phone network was upgraded with UMTS, so that I could enjoy fast internet here once again. By the way, I was the only one on the island to have internet because the resort’s internet access was broken. Word got around so quickly that the locals came to me to log in to their Facebook account. 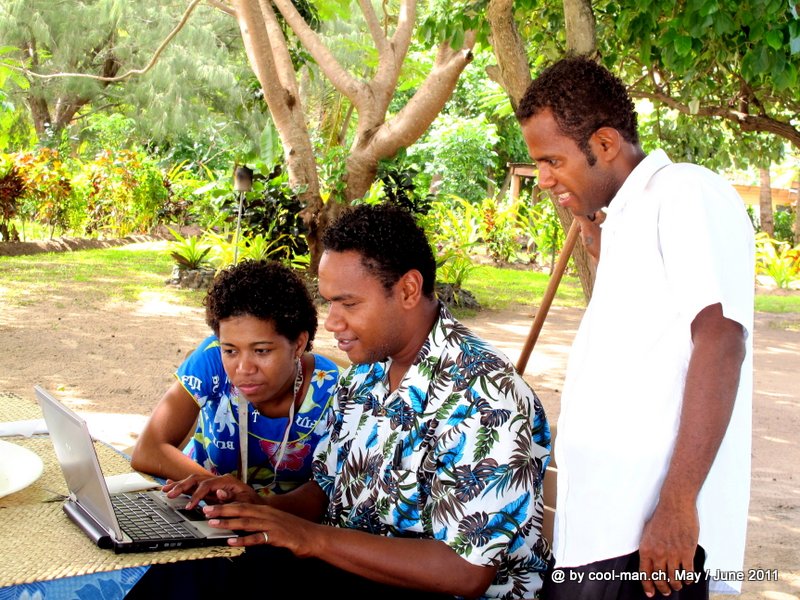 Otherwise, the islands were only equipped with the slow 2nd generation mobile phone network (GPRS), which takes about 10 minutes to open your first mail. Downloading the credit card statement took about 25 minutes.

Back on the main island I traveled along the south coast, the so-called Coral Coast, to Suva, the capital and largest city in the South Seas. On the way there were the biggest dunes of the South Seas to admire and there are along the coast a few resorts with beautiful beaches. 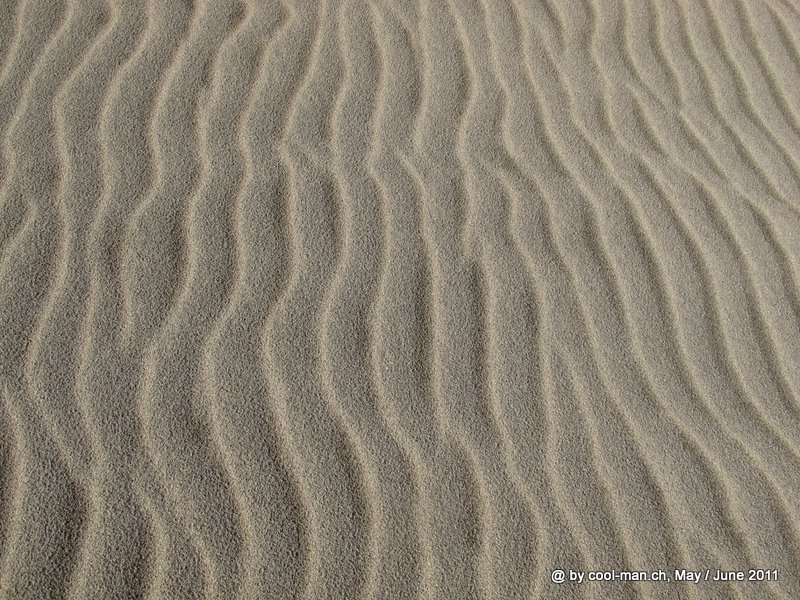 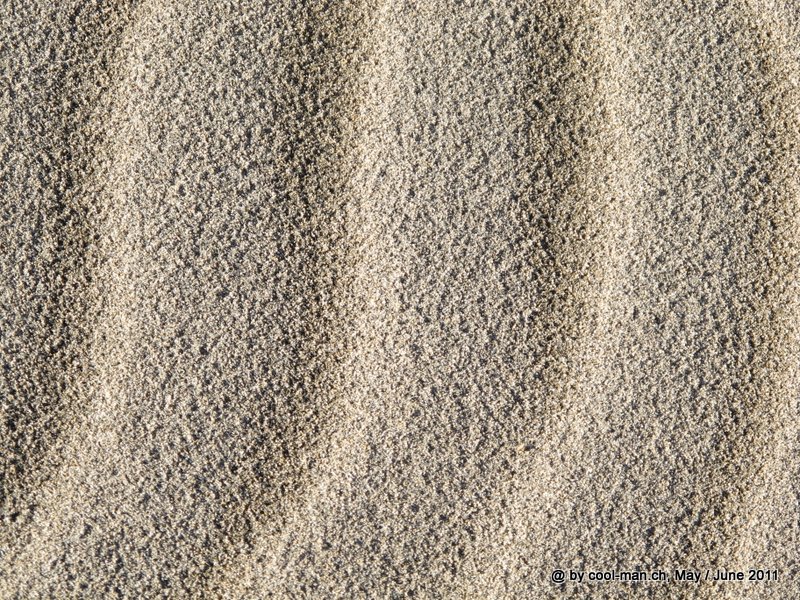 Suva also has a relatively small center and is very spacious. The architecture of the city reflects different styles and time periods. Colonial rows of houses stand next to modern shopping malls. There are villa quarters – well, not villas as we know them from Switzerland – as well as large accumulations of the simplest dwellings standing on unregistered land. Half of Suvas population lives in these huts. Accordingly, crime is high at night. It is recommended to always use a taxi at night and not to be alone anyway. A highlight in Suva for me were the Indian sweets, which I already know from India and which are produced here by the local Indian population.

My last week on Fiji I spent on the island of Taveuni, which is known for its diving and snorkeling sites.

A staff member informs the passengers about the safety regulations before the flight to Taveuni. 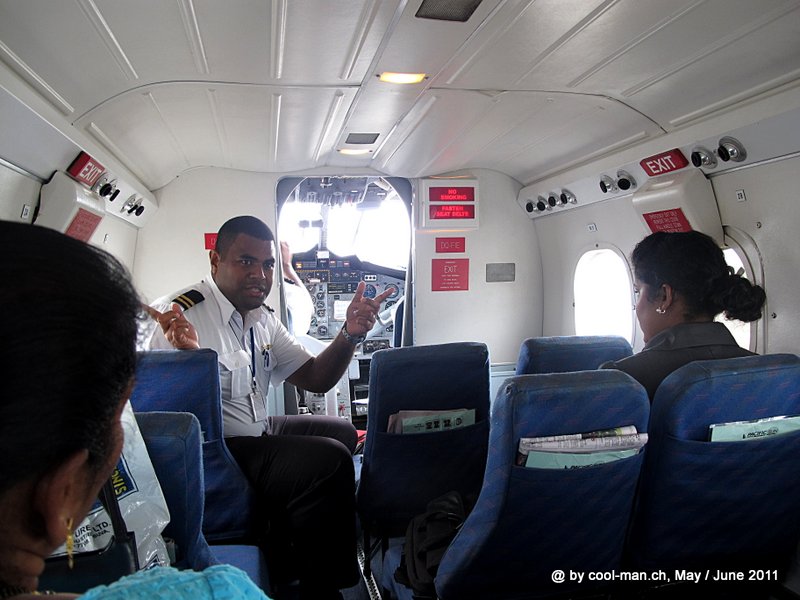 Here I got to know the real Fiji. The island does not have its own electricity grid. Every village or resort has its own generator, which often only runs in the evening for a few hours because of the expensive petrol. The only road around the island is only a small part paved. The bus timetable is to be understood as an approximation. Delays of more than one hour are quite normal. To be on the safe side, the mechanic rides with the bus. And in fact there was a problem with the brakes that the mechanic was able to solve on the way. Of course the mobile phone network is only on the 2nd generation. For this I was rewarded with wonderful landscapes, endless palm groves, lonely beaches, original villages, an extremely diverse underwater world, flora and friendly people. There is an abundance of fruit, so everyone can pick as much fruit from the trees as they want for free.

Evening entertainment in Taveuni: playing guitar and drinking kava. Kava is the national drink of Fiji. It consists of powder from the roots of a plant found in the Pacific and tastes slightly bitter. 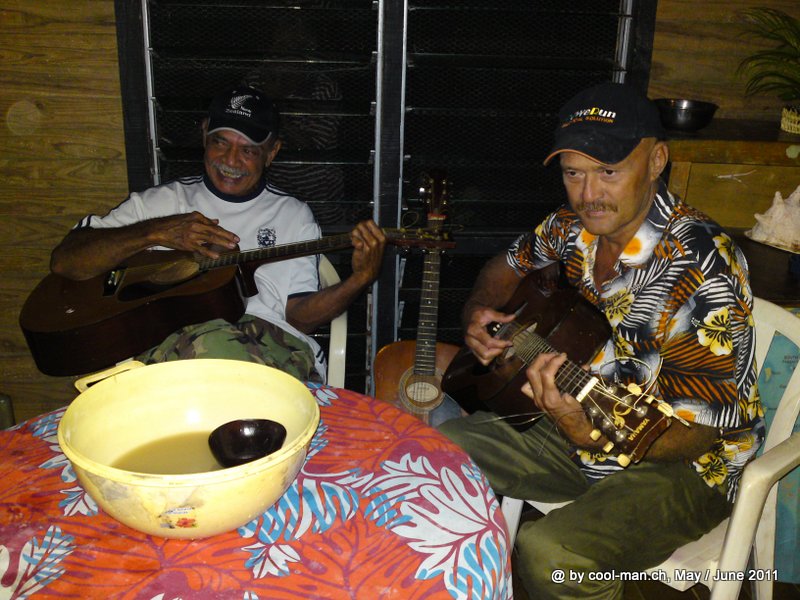 The 180 degree meridian runs through Taveuni. This shop claims to be the first in the world to open every day. 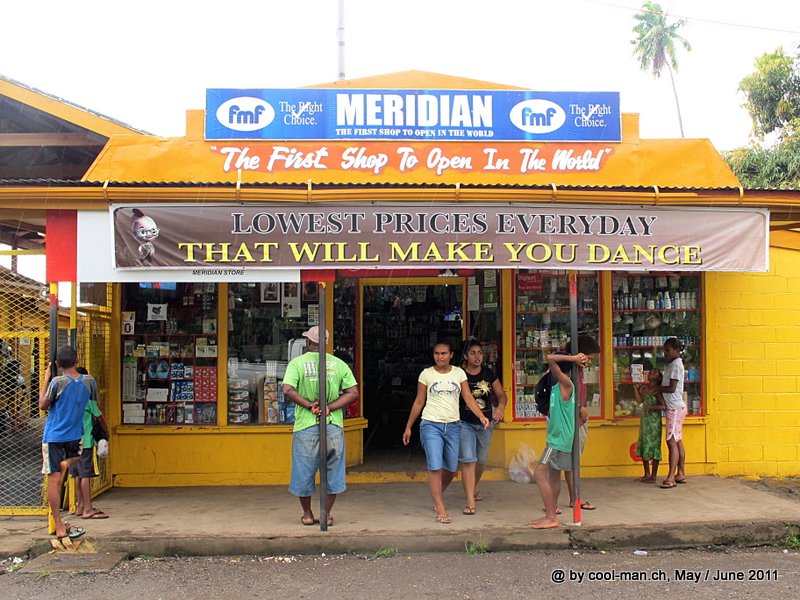 A few foreigners have also discovered Taveuni and now run resorts, have holiday homes there or enjoy a very contemplative life on their properties with sea views.

The large terrace on the lower right belongs to a restaurant where I had lunch a few times. 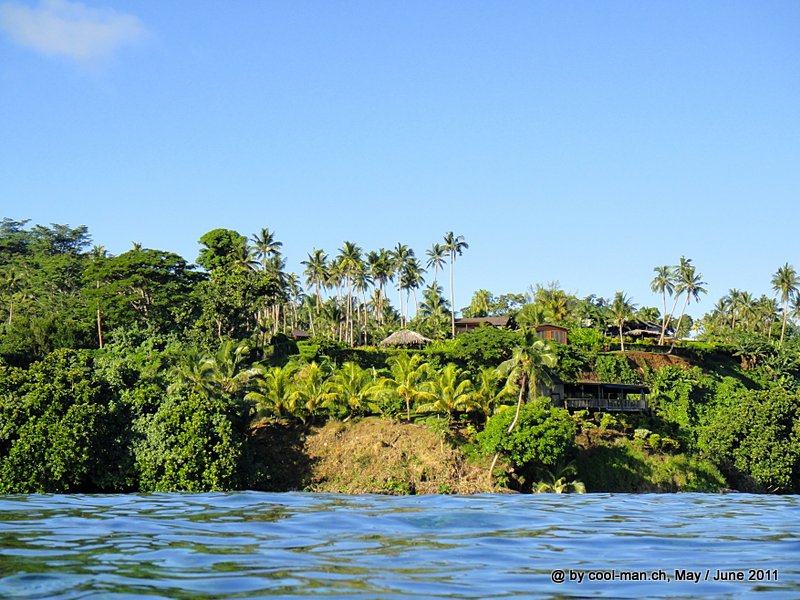 School children board the school bus 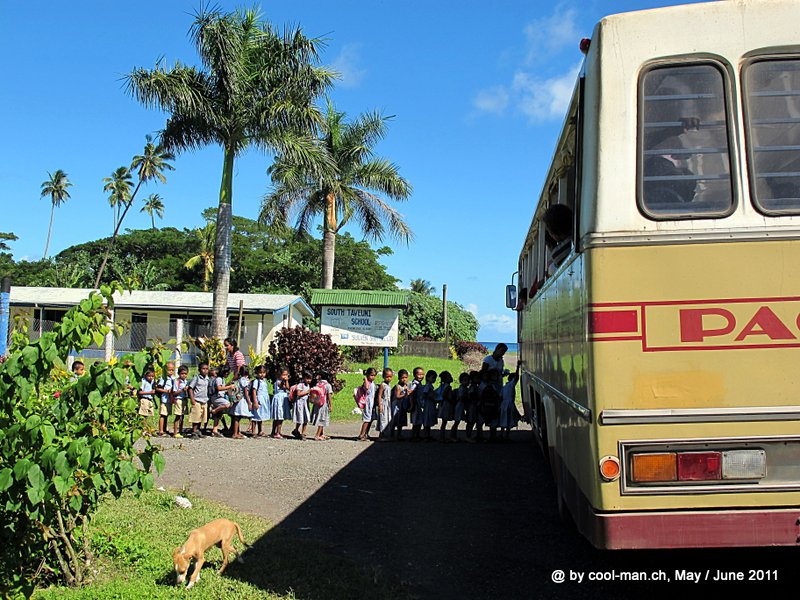 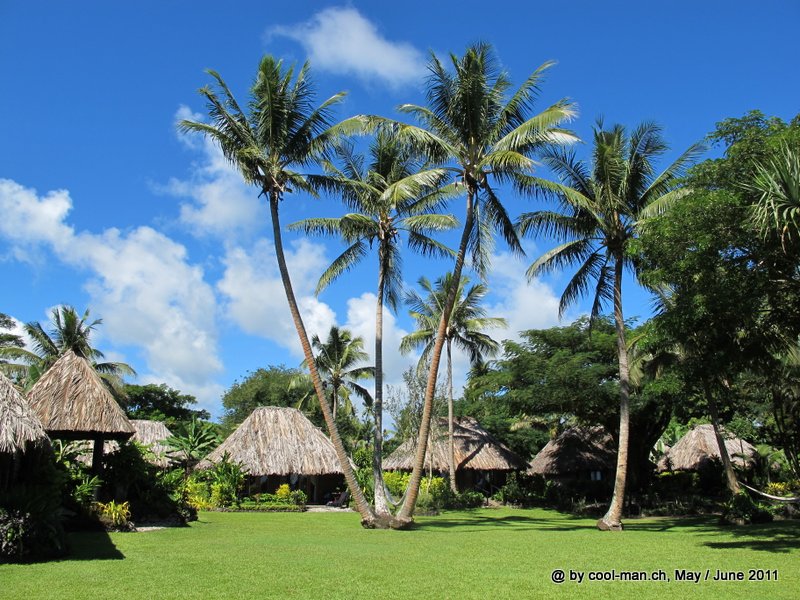 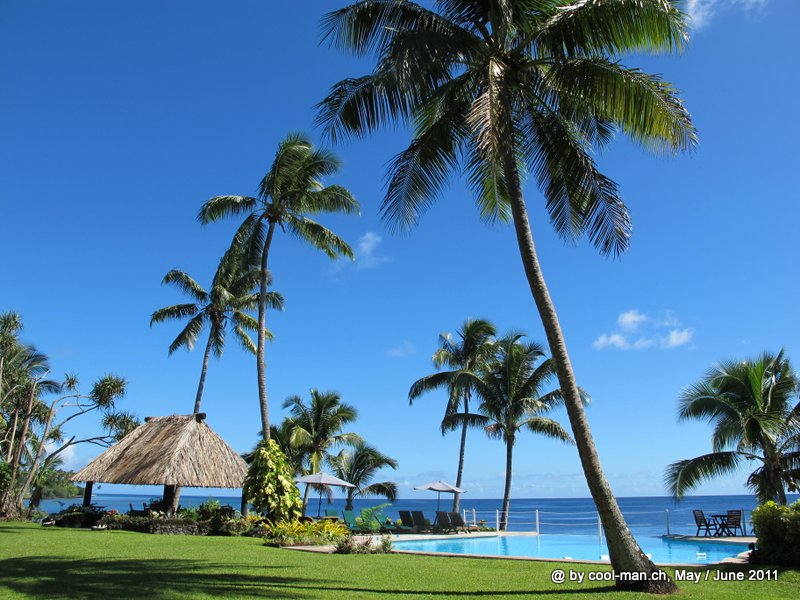 The New Zealanders have introduced the concept of hiking trails. The villagers maintain the trails and are allowed to charge a fee for using them. This allows them to finance the school and other village facilities.

A villager was my guide on the Lavena coastal walk in Bouma National Heritage Park. He was walking the 5 km there and back barefoot.

The end point of the way was the Wainibau waterfall, which one could reach swimming. 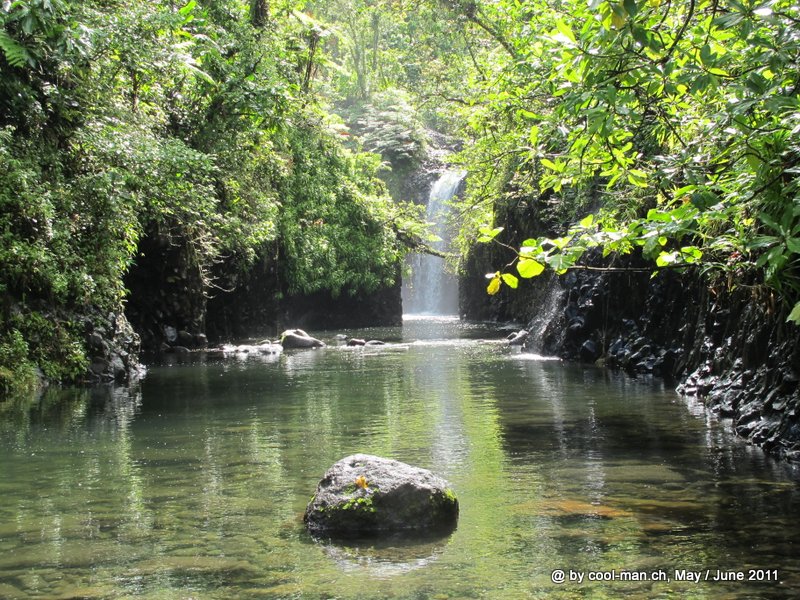 But even Taveuni is not without problems, as the pearl farms operating here have to be guarded 24 hours a day after all the shells and the pearls in them have already been stolen in a cloak-and-dagger operation.

All in all, the trip to Fiji was worth it. The underwater world was more diverse than I know it from Asia. I also got to know interesting tourists that I would not have met in Southeast Asia. But if I got back to Fiji on a trip around the world again, I would only visit the island of Nacula. Because this place is a paradise!

All in all, the five and a half month winter trip went without a hitch. Apart from a cold, I was never ill and did not have to experience a serious incident. This is not a matter of course. If you are in the wrong place at the wrong time, something can happen even to an experienced traveler.

After a few days in Singapore I returned to Switzerland.