Since the rainy season soon began in large parts of South America, I flew with a colleague to Panama, which we visited for about a month.

Panama City had a very bad reputation years ago. Since the Panama Canal and its revenues fully belong to the Panamanians, Panama has been able to invest a lot in the construction and security of the country. Meanwhile, the country is largely modern and the skyline of Panama City can compete with American cities. 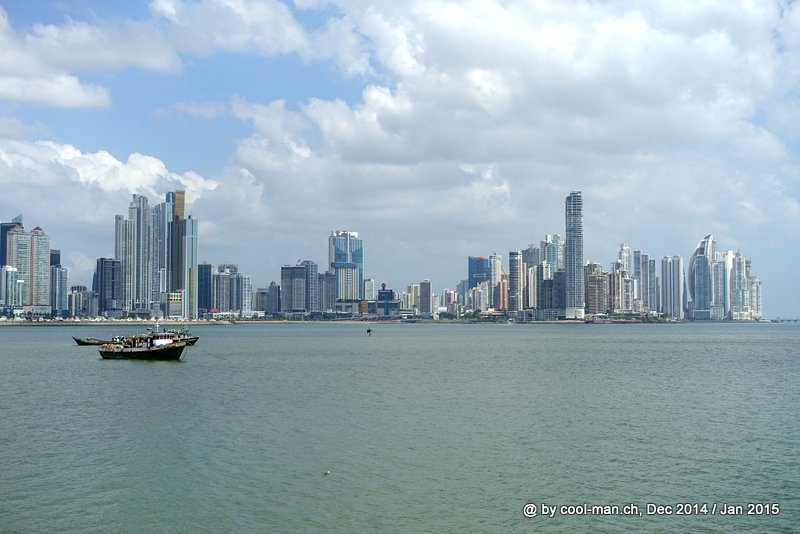 The skyscrapers are mainly occupied by banks. 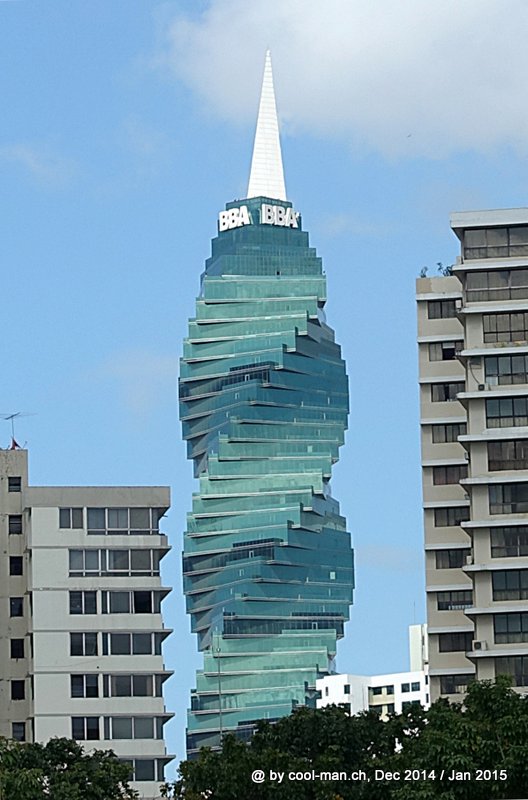 Since April 2014, Panama City has been the first country in Central America to have an subway, which currently comprises one line and is being expanded. The old town is slowly being renovated. A few good restaurants can be found in the historic buildings and on two squares. The first task in Panama City was to find a SSD hard disk for my laptop to replace my dying hard disk, which was damaged in the highest village of Chile because of the thin air. SSD hard disks do not have rotating parts, but store the information on memory chips. This is important for me as I will be using my computer at La Paz (3’650 m.a.s.l.) and at Lake Titicaca (3’812 m.a.s.l.) at altitudes that are unsuitable for conventional hard disks. I found a computer repair shop that could order an SSD hard drive. I also ordered a new screen because the old one often flickered. The delivery time was three weeks, which was ideal as we wanted to travel around Panama and return to Panama City at the end of our trip.

A visit to Panama is not complete without a Panama Canal tour. We booked a tour that took us on a ship through about half of the canal and over two locks. We were amazed at the huge cargo ships with the countless containers. The canal is 82 km long. By means of the locks, which are all historical and therefore over one hundred years old, the ships are lifted up to 29.5 meters above sea level. 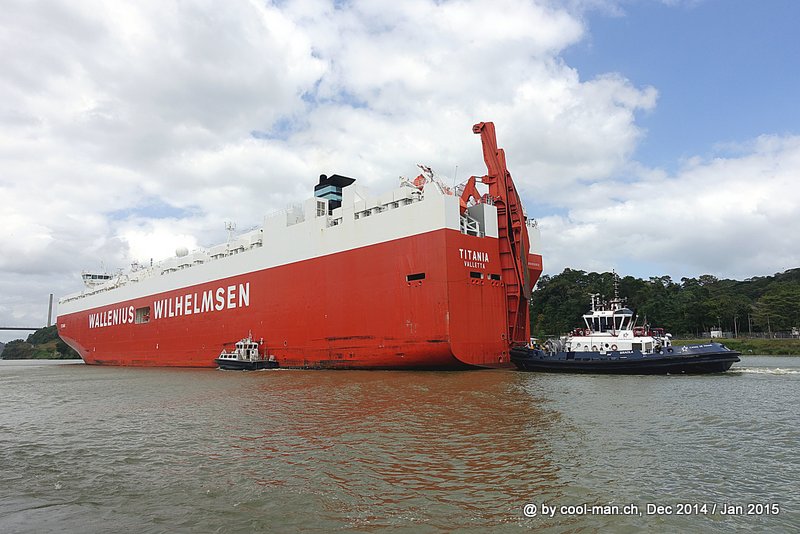 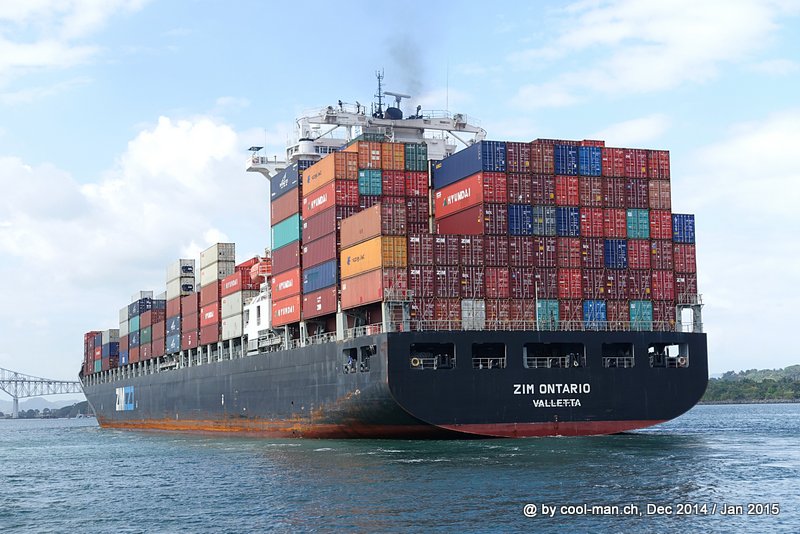 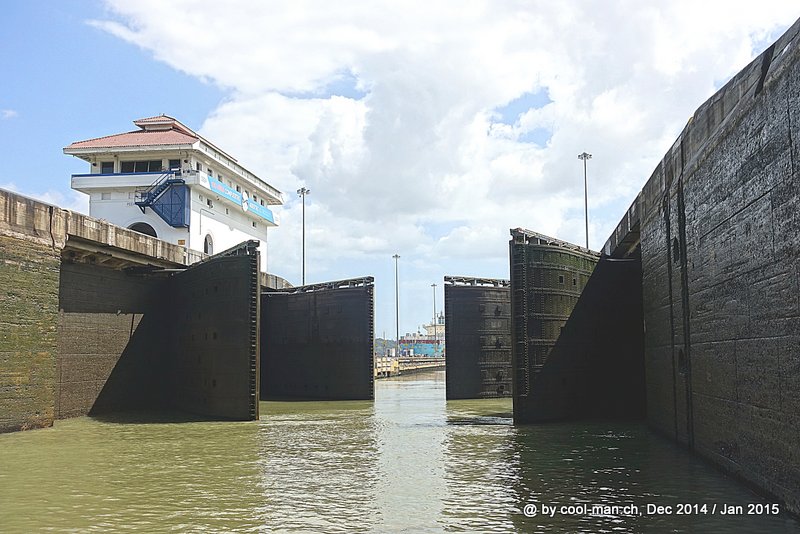 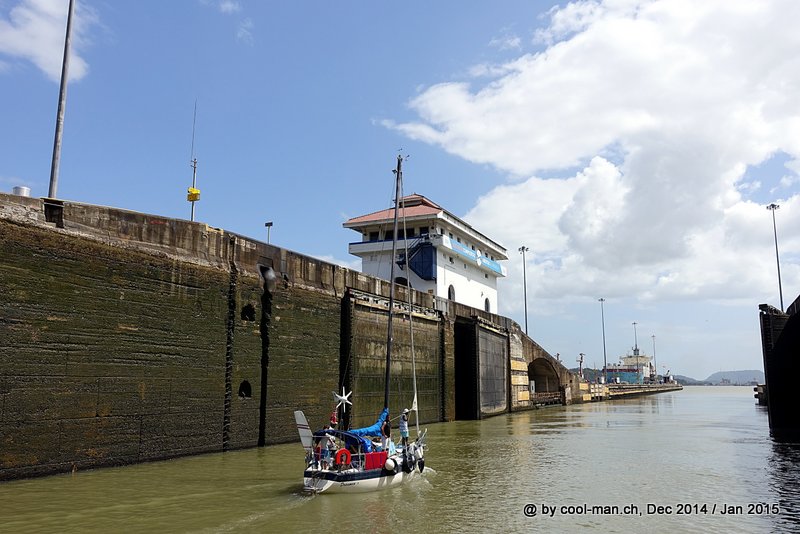 Next we visited the small town of Pedasi, where a colleague of my travel colleague emigrated with his wife, children and dog. We found a small town with a dirty beach, high waves and hardly existing public transport. The next beautiful beach is 35 kilometers away. About the same distance in the opposite direction we find the next bigger town. Everywhere in the area you can see “For sale” signs. We wondered if the emigration plans of this family would work out.

The beach Playa Venao, 35 km away from Pedasi 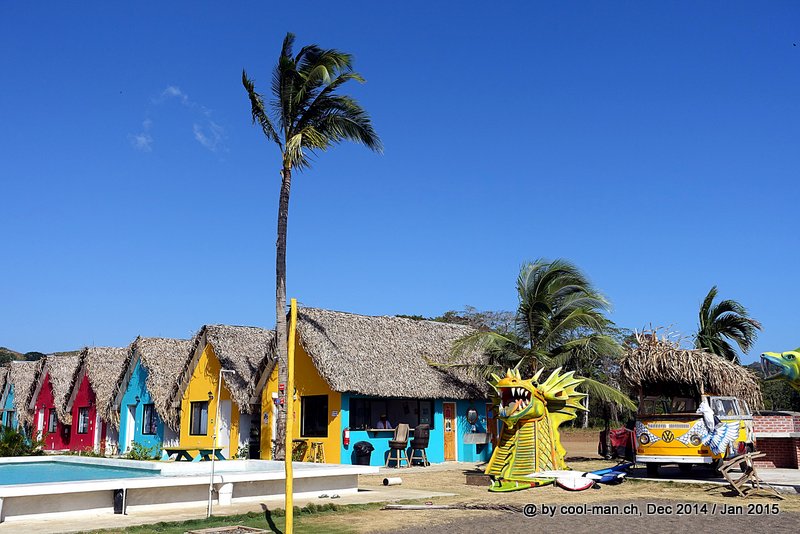 We traveled on to Boquete, a small village at about 1’200 m.a.s.l. On the slopes around the village coffee is mined on the volcanic earth. The coffee was quite good, but there was something missing to keep up with top coffee from Colombia or Ethiopia. It was cool and often rainy, so we had to put on our long trousers and sweaters in the evening. 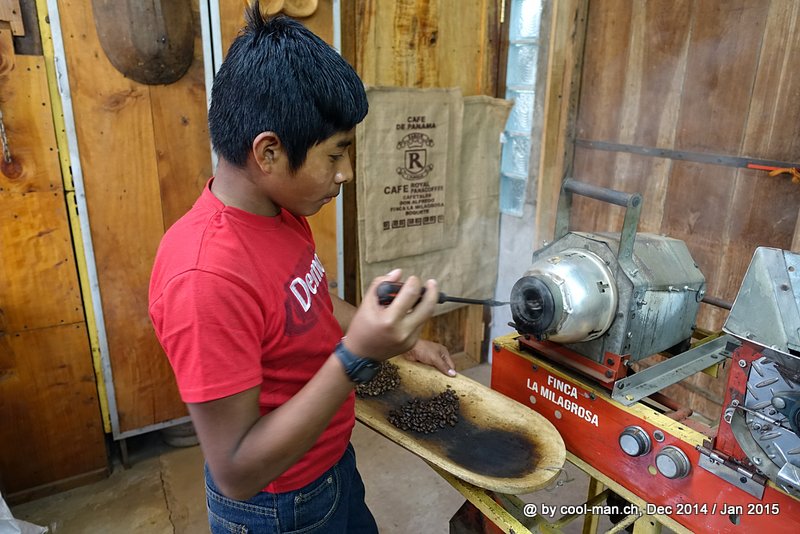 After a four hour bus trip and a half hour boat trip we reached the island village Bocas del Toro. From this place several more islands can be reached. The chocolate from cocoa beans from the province was a highlight. Another one was the beer of the local micro brewery. Especially the dark Chocolate Stout was phenomenal, so that we visited the brewery every day. Otherwise the place was another disappointment. The price/performance ratio of the accommodations was not correct at all and the only beach where one could swim was only accessible by boat and an entrance fee was charged. We also expected much more from the snorkeling tour.

According to the Lonely Planet travel guide, the San Blas Islands are one of the highlights of a Panama trip. They are located in the Caribbean Sea and are only a few kilometers off the mainland of Panama. The Kuna people were able to gain great autonomy in this remote region of Panama. The Kuna control both the islands and all the very simple “resorts” as this people does not accept external investors. Although many islands are beautifully located and we have even seen dolphins on the outward journey, it was noticed that there are tourism beginners at work here who built the tourist infrastructure without regard to aesthetics. Ugly concrete walls can be found as well as visible reinforcing irons, plastic buckets and plastic pipes. Accordingly, there is no South Sea atmosphere. In addition, the weather was often windy and partly rainy, so that we could not snorkel.

The sun shone for a short time. 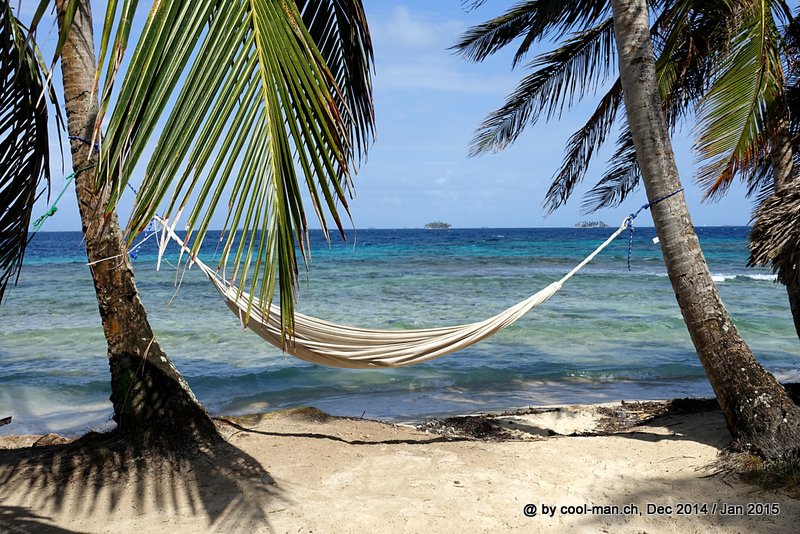 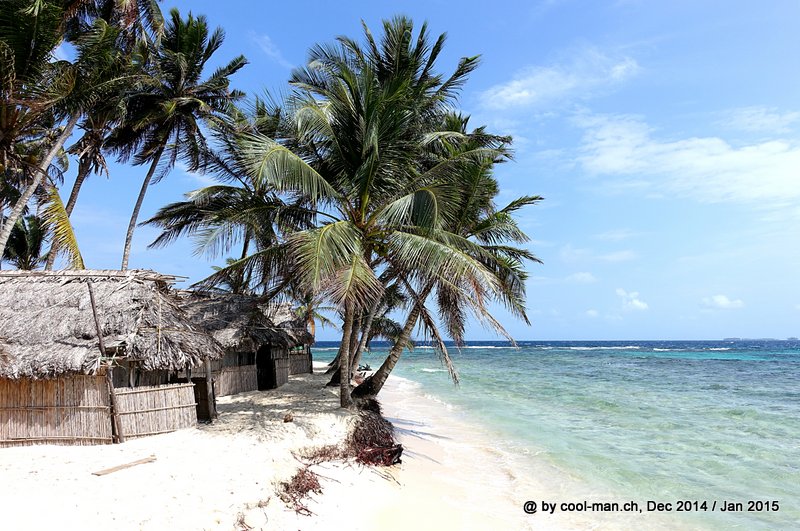 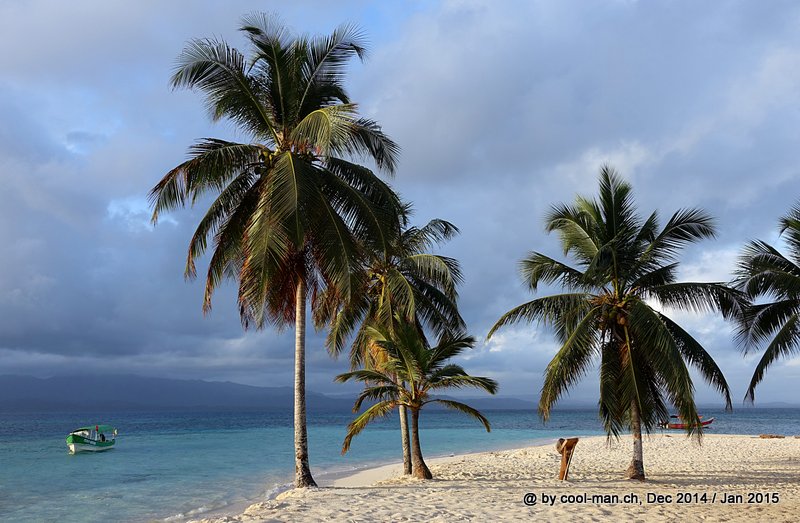 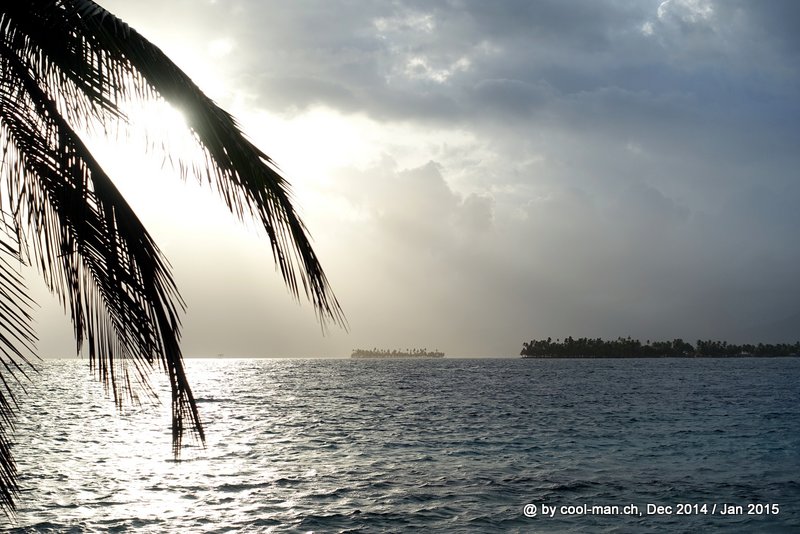 After this further disappointment we returned to Panama City. First I went to the computer shop. The hard disk and the screen had arrived, so that the computer shop could start with the installation. While the parts worked perfectly, I was less satisfied with the shop’s configuration. First, the wrong operating system (64 bit instead of 32) was installed. Also the names of the user accounts were not exactly the same as before, which caused me some difficulties. Since I didn’t have the activation code of my own Windows operating system with me, I had to buy a new operating system. Because the new drive had a smaller capacity than the old one, I couldn’t simply copy the old one to the new drive. This meant that I had to reinstall and re-configure all the programs, which took many hours. Without my mobile backup hard drive, I would have lost the old program configurations. Then I would have had to travel to Switzerland so that I could continue my asset management business. Fortunately, I was spared that.

All in all, we were not satisfied with the price/performance ratio in Panama. Actually I wanted to travel further in Central America, but I was told that the next country Costa Rica was even more expensive than Panama, but otherwise very similar. So I decided to do an island hopping in the Lesser Antilles. My journey led me from Guadeloupe to Grenada. Since the area is known for its rum production, I wanted to visit as many distilleries as possible and taste their rum.