After a 3’600 km long flight from the Chilean mainland I reached Easter Island or Rapa Nui, as the locals call their island. Rapa Nui is one of the most remote islands in the world. The next inhabited island is the island Pitcairn, which is 2’075 km away and on which the 50 descendants of the mutineers of the ship “Bounty” live. Rapa Nui was first populated by Polynesians around 1200 AD. They probably left the Mangareva archipelago 2’600 km away. One can hardly imagine how these people could find the only 25 km long Easter Island in the wide ocean. After all, parts of plants in the water as well as insects and birds in the air already show 100 km before an island can be seen that land is nearby.

The famous statues of Rapa Nui, called Moai, represented presumably deceased respected clan members. The more numerous and bigger the statues were, the more prestige the clan gained. The competition between the clans and the overpopulation led to a mad overexploitation of nature, which finally meant the downfall of the Rapa Nui culture at that time.

When the social order collapsed within a short time, 288 Moais were erected, 92 were on their way to their destination and 397 were in progress. The largest Moai was 9.80 meters high and weighed 74 tons.

When the first Polynesians took the land, the island was richly forested and three tree species reached more than 15 meters. The transport and erection of the Moais required a lot of wood, so that more and more of the large trees were felled. In the end there was not even any wood left to build the canoes, without which no fishing was possible. Also the number of birds decreased strongly because of the lack of trees. When the first Europeans discovered the island in 1722, only 2,000 to 3,000 people were on the island, compared to 15,000 at the height of Rapa Nui civilization a century earlier. As food became scarce, war broke out among the various clans. Cannibalism could also be proven. The clans began to overthrow the Moais of the other clans, which was only possible in a group under immense use of force. In 1830, because of the internal conflict, all the Moais on the island were finally on the ground, with some also overthrown by earthquakes and tsunamis.

In this time of upheaval, good warriors became more powerful and the cult of the bird man gained importance. This was based on a competition for the first captured egg of a particular species of bird on an offshore island. In Hawaii, there are exactly the same rock paintings of the bird man cult, so one has to assume that the first settlers already knew this cult.

Despite the devastating situation on the island, things got worse. In 1862, Peruvian slave traders invaded the island and kidnapped 1,500 people, half of the population at the time. Among the kidnapped people was the entire upper class, which was the only one who could read and write the Rongorongo script. Thus this writing was lost forever. Diseases, introduced by the Peruvians and by whalers, decimated the rest of the population, so that in the low point only 111 people lived on Rapa Nui. A few people were old, so only 36 of them had children again. At times so many people died that the dead could not even be buried.

Today more than 6’000 people live on the island and the most important Moais are raised again. Although it is a secluded, simple life with slow Internet, the people do not live badly. Many are employed in tourism. Chile also grants them a complete tax exemption. Only the VAT on goods and services from the mainland has to be paid, because it is already included in the price. The traffic on the island is so modest that there are neither traffic jams nor parking meters or traffic lights.

I was on this magical island for eight days and mostly traveled by bicycle.

As the photos show, a trip to Easter Island is a very special experience. From the Moais emanated a tranquillity that put me in a meditative mood. At night I could see millions of stars and the Milky Way, because there is hardly any light and air pollution.

The Tahai statues stand near the main village of Hanga Roa 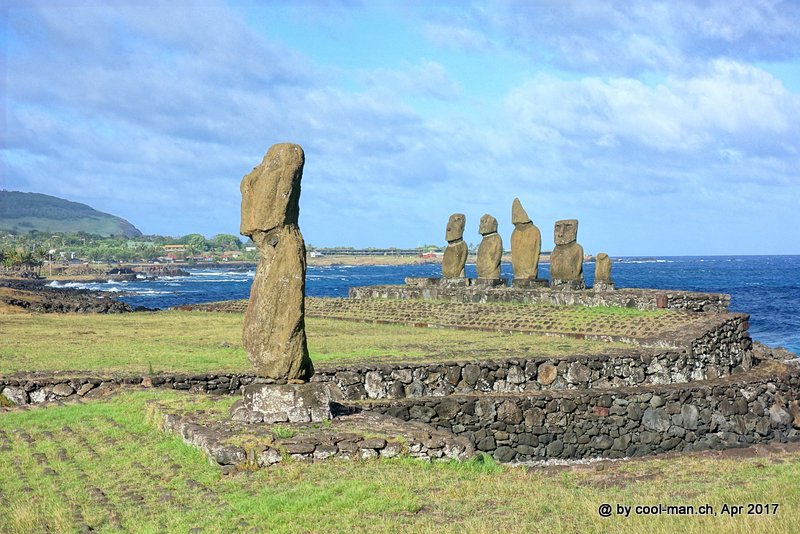 … and some red tuff statues. 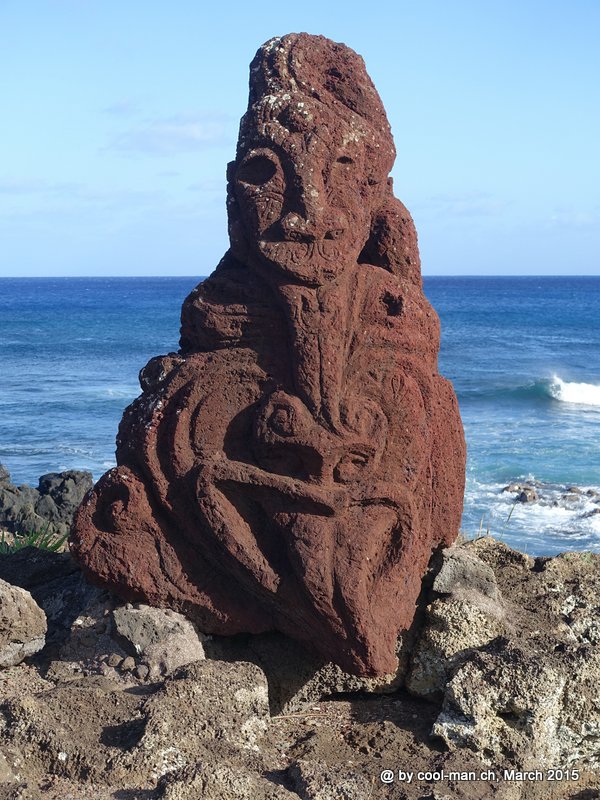 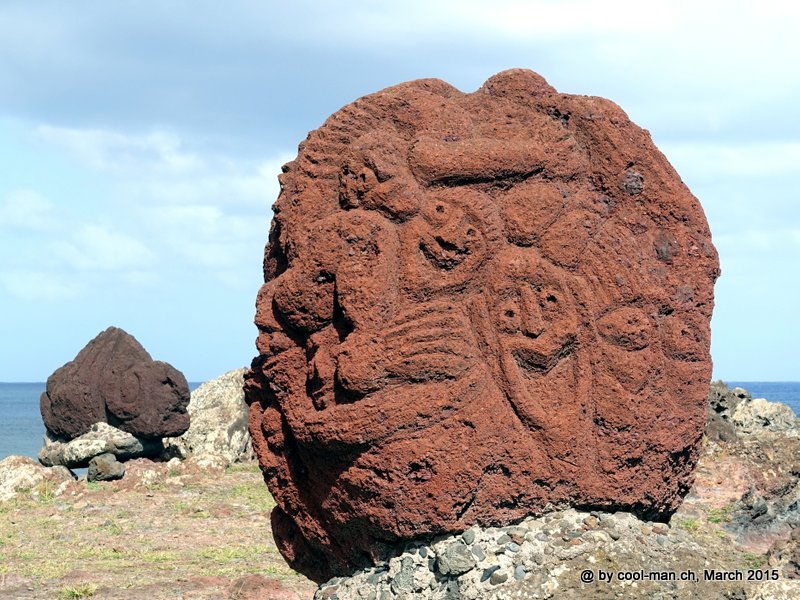 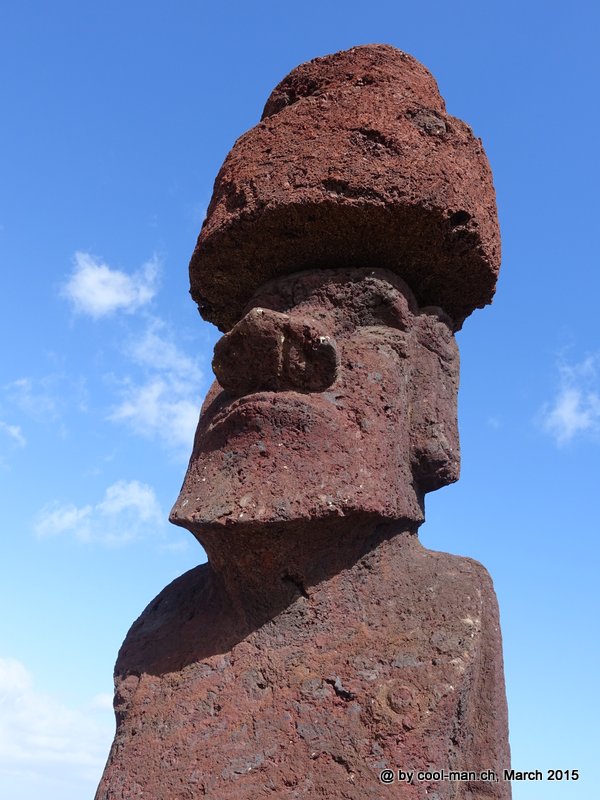 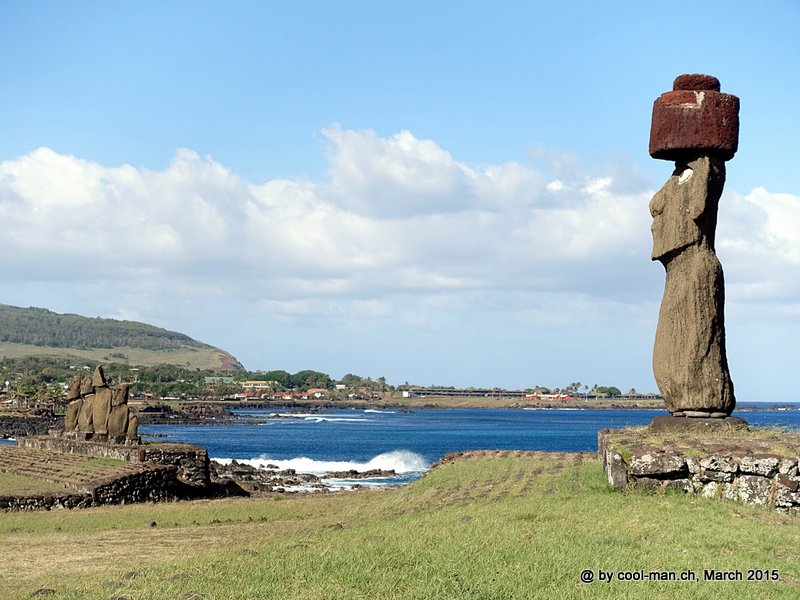 The Rano Kau crater, on the edge of which the temple settlement of Orongo is located. 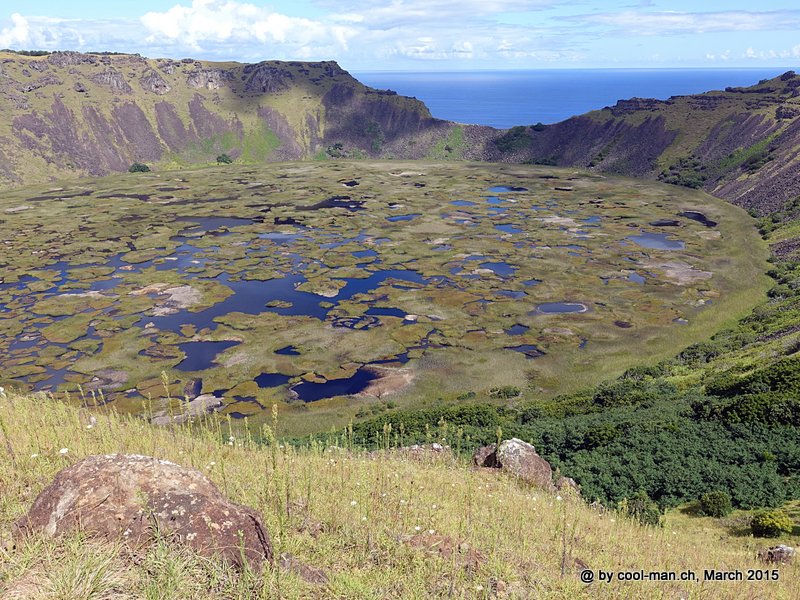 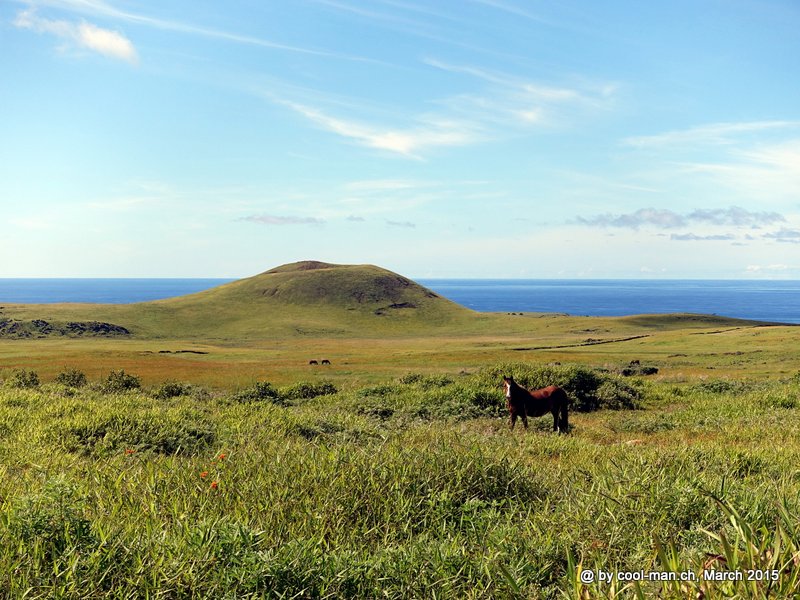 The petroglyphs and rock paintings were important, holy representations for the old Rapa Nui. Here an octopus at Papa Vaka. 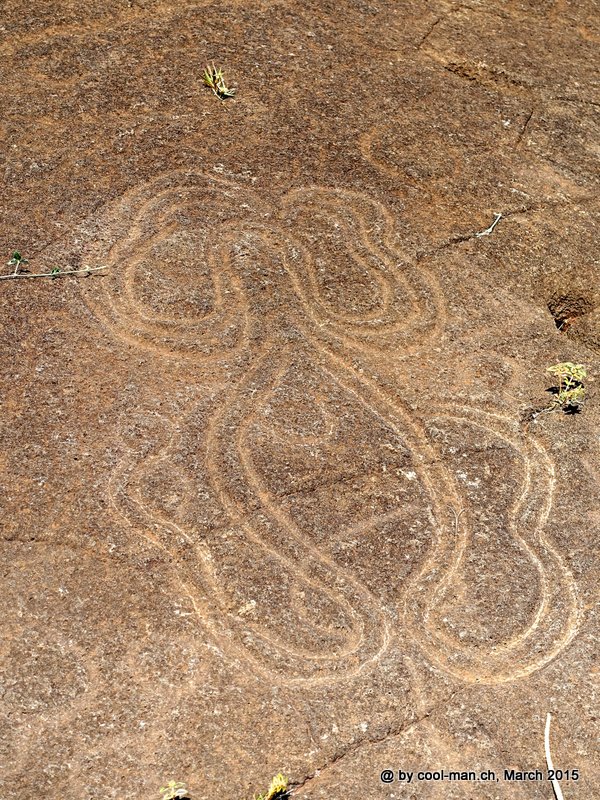 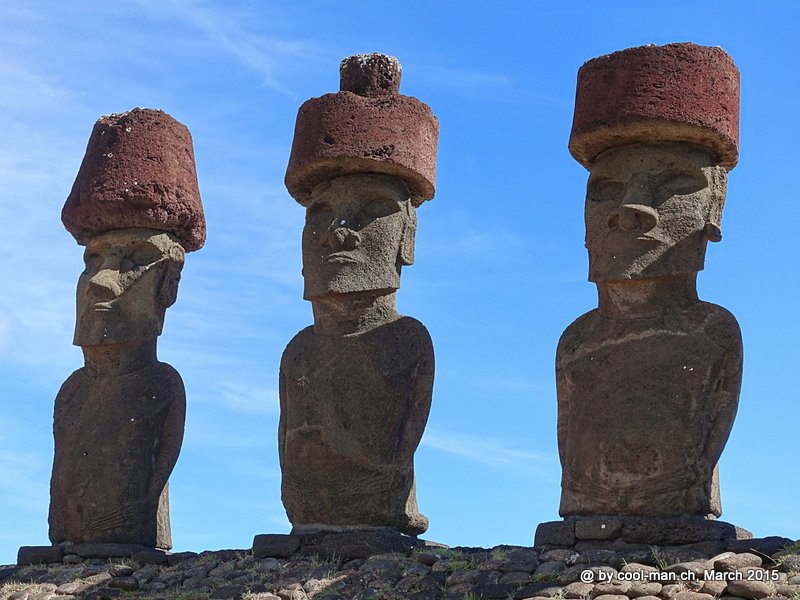 The only beach on Easter Island at Anakena 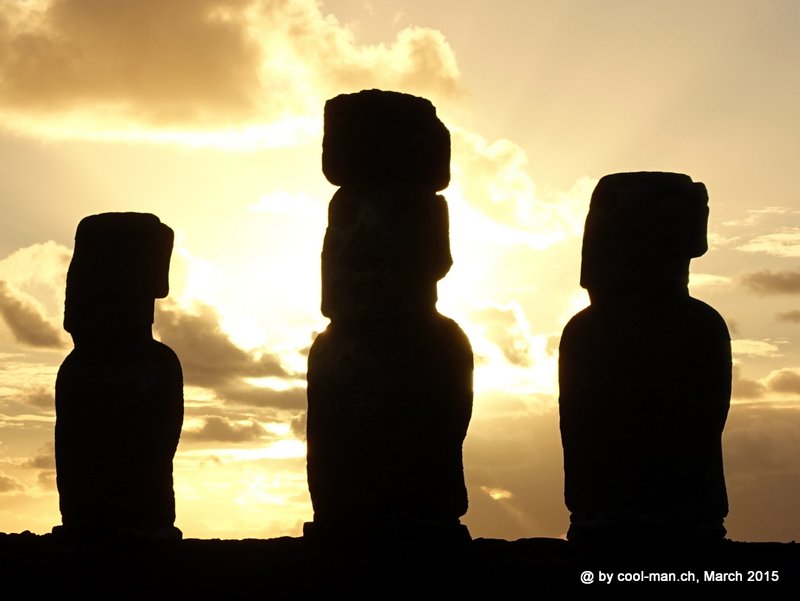 All statues at Tongariki 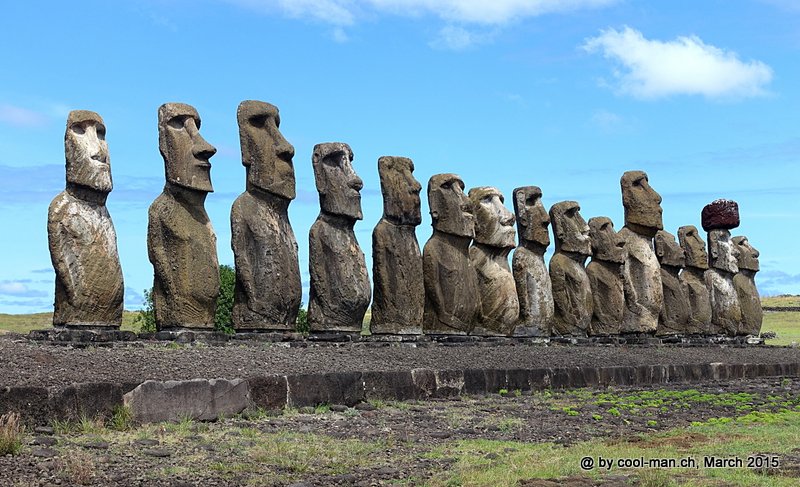 Overthrown Moais, the red hats have rolled away. 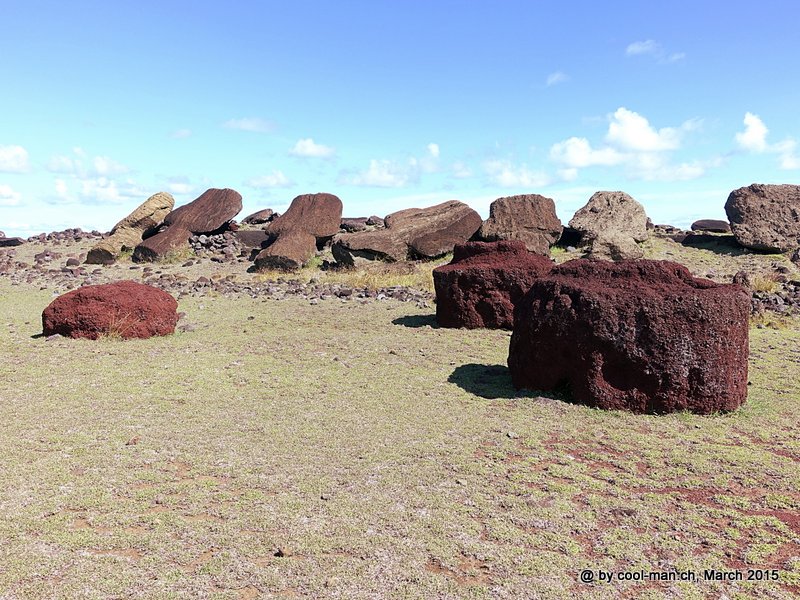 The Rano Raraku quarry, where the Moais originated. These Moais were ready for transport. 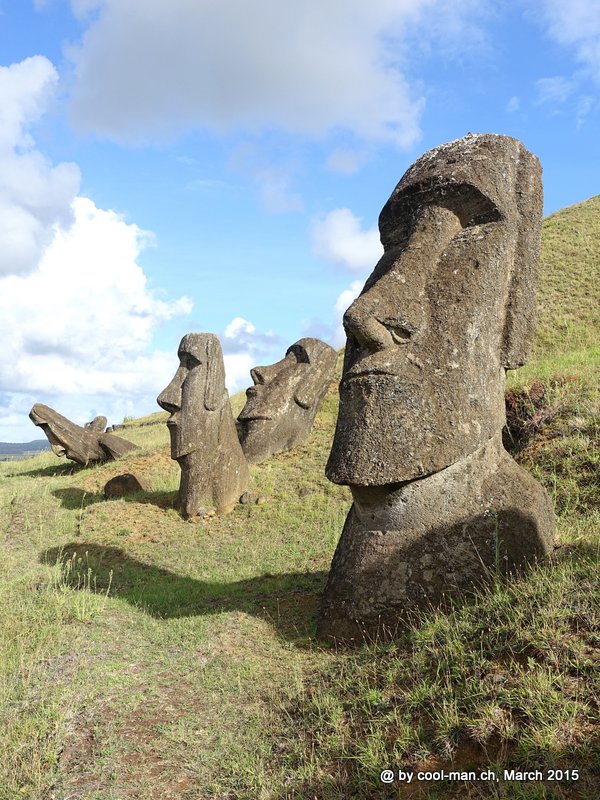 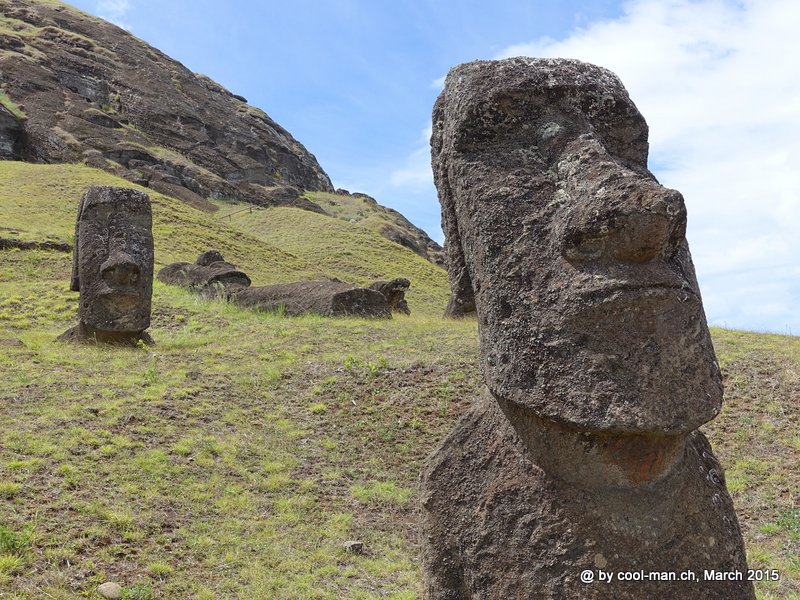 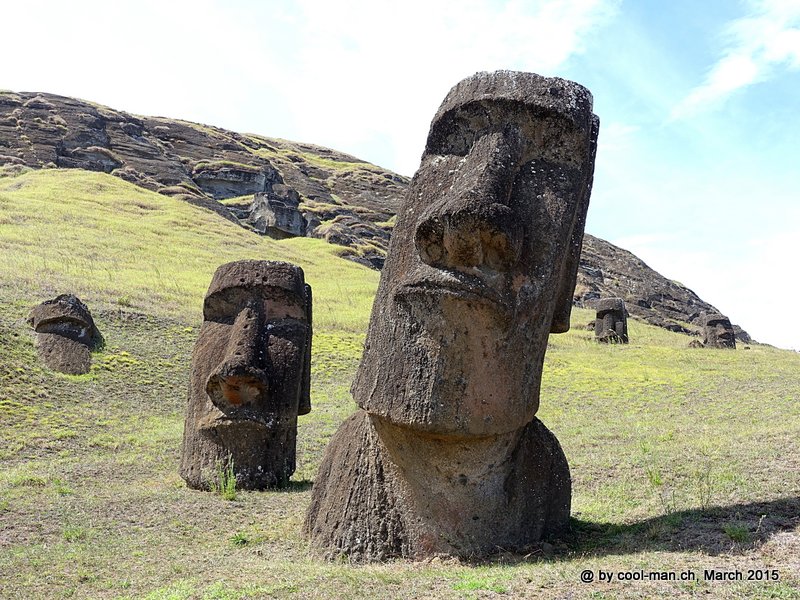 A show of a Rapa Nui group 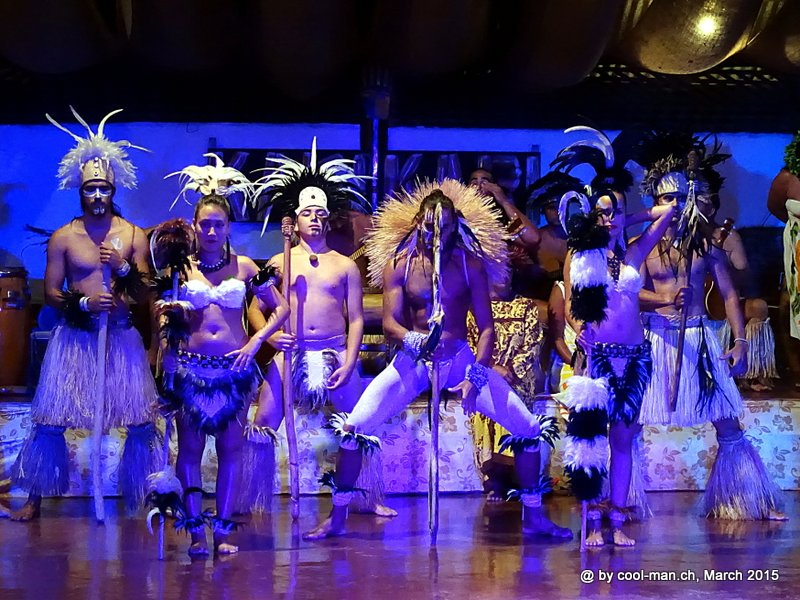 After an impressive week on Easter island, I flew on to Peru.