This is the second part of my report about my Sri Lanka trip in 2019. The first part describes my visit to the historic sites of Dambulla, Sigiriya, Polonnaruwa, Anuradhapura, Mihintale and Huluru Eco Park and can be found here.

The report about my trip last year in the southern part of Sri Lanka can be found under this link.

By train I reached Jaffna which is located in the far north of Sri Lanka.

The city, mostly inhabited by Hindu Tamils, was the second largest before the civil war, which lasted from 1983 to 2009. Today it is the 12th-largest. The city was badly damaged during the war. Part of the population was displaced and the city was occupied by the Tamil Tigers and Indian peacekeepers. More than 40,000 people, mostly Tamils, fled to Switzerland at that time, so that on my trip to the north I met again and again people with relatives in Switzerland.

I hardly noticed anything of the civil war and the locals didn’t want to talk about this time anymore. Most of them are simply glad that the war is over.

Next to the clock tower is the statue of the Anuradhapura king Ellalan. Although he lived 2,200 years ago, he is still revered as a just king.

There is not much to see in the fort built by the Dutch in 1860. The most interesting thing was this sign, which forbade vulgarities on the area of the fort. The pictograms show which offensive behavior is meant. 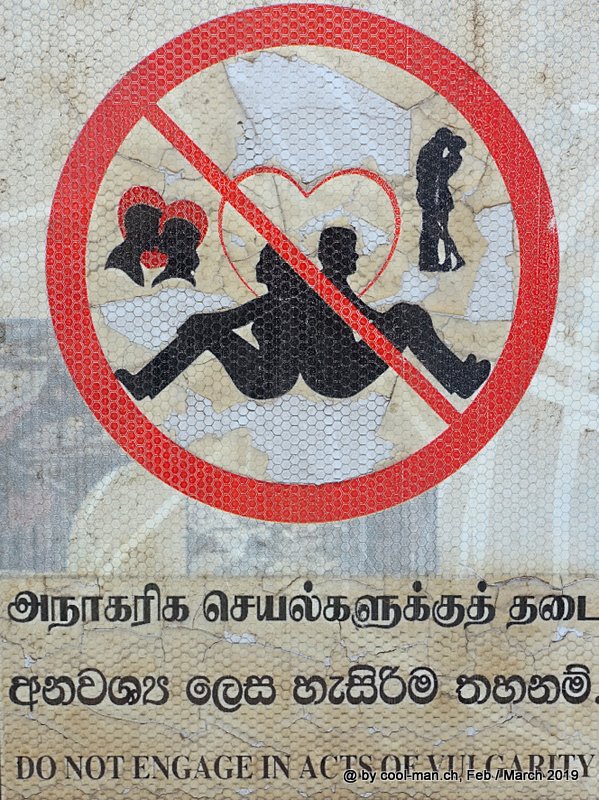 Further I visited the Hindu temple Nallur Sivan, built in 1734, one of the most important in Sri Lanka. As a man I was only allowed to enter the temple with my upper body bare. 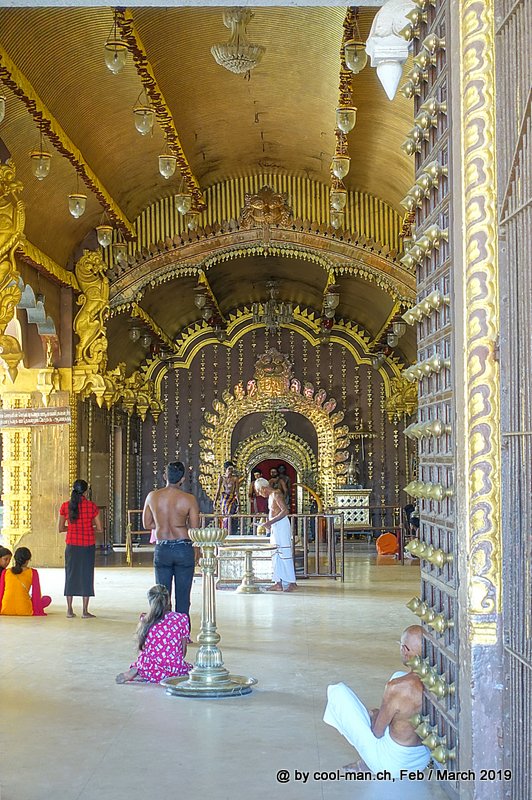 The city itself offers few sights. I rented a Tuk Tuk with driver for one day and visited the attractions of the area.

First I visited the Casuarina beach on the island Karainagar, which is connected to the mainland by a bridge. Apparently it is the best beach in the Jaffna area. In spite of an entrance fee, there is rubbish on the beach and the infrastructure is ruined.

Grotto of Our Lady of Lourdes in Mathagal

I passed this artificial, almost kitschy grotto dedicated to the Virgin of Lourdes. 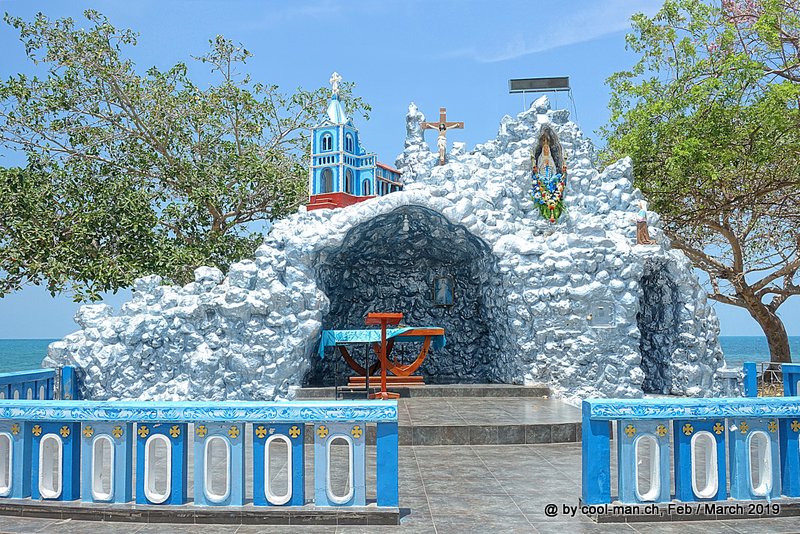 This Hindu temple didn’t impress me very much. I found the wagons standing in front of the temple more interesting. They are probably used for processions. 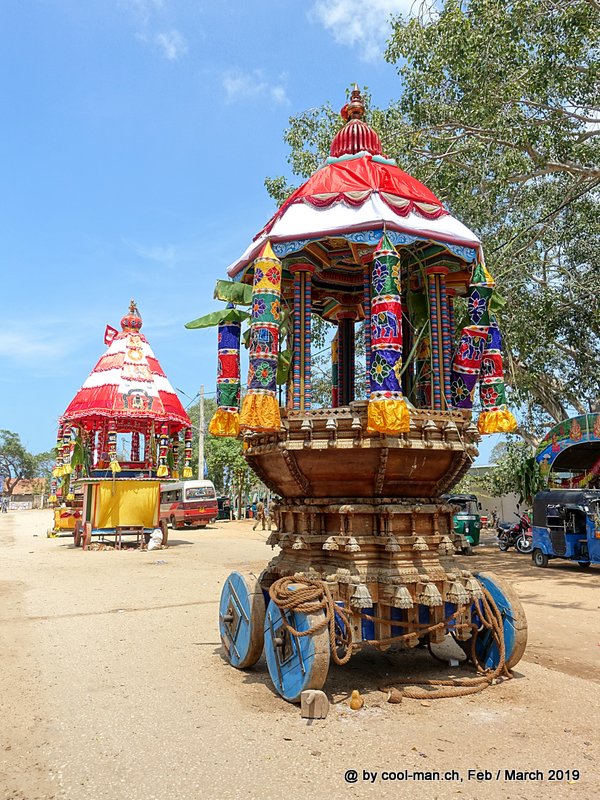 At the Maruthanarmadam Anjaneyar Temple the huge statue of the monkey god Hanuman stands out first. Next to the temple stood this carriage, which is pulled by four horses.

By train I reached the city of Trincomale, 230 km away on the east coast of Sri Lanka.

The city has its own beach, but the high waves make swimming in the sea impossible.

On the first evening and the following day I walked to the Hindu temple Koneswaram Kovil, which is dedicated to the god Shiva and is located at the end of a promontory that protrudes into the sea. Near the temple there are a few food stands with a view of the coast and the sunset. 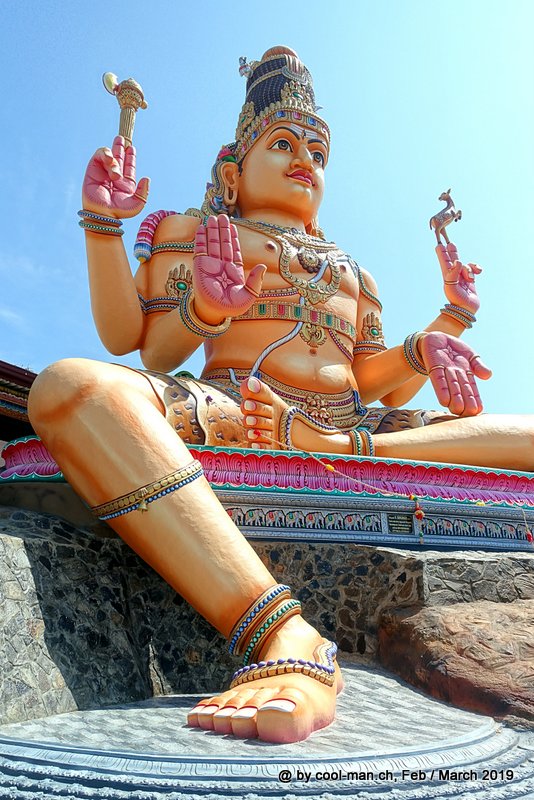 The sculpture of a holy cow 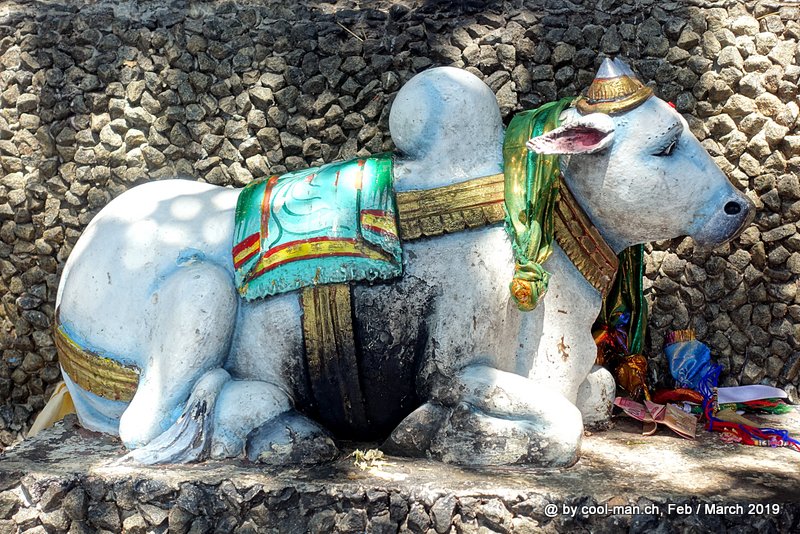 Statues of the Elephant God Ganesh 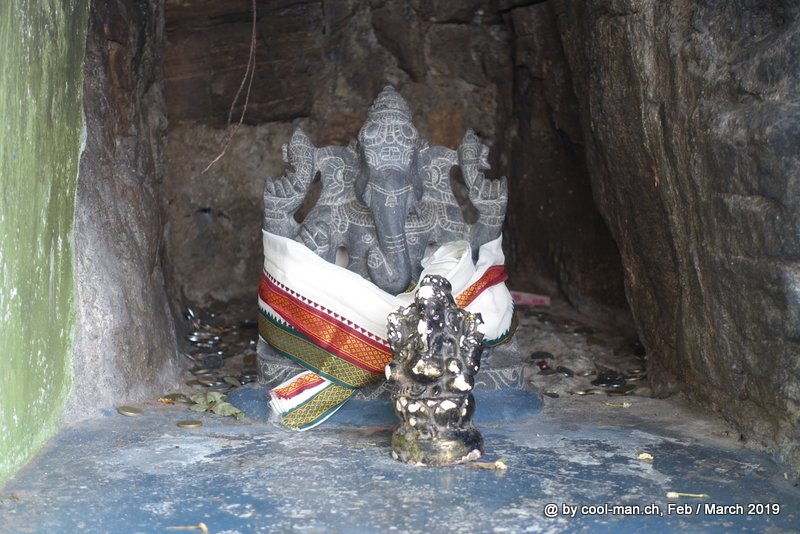 This temple in the middle of the city of Trincomale seemed to be a Hindu temple like many others. But this temple dedicated to the deity Kali was unique. It was incredibly colorful and had countless details. I was only allowed to enter this temple as a man with my upper body naked.

The entrance area of the temple 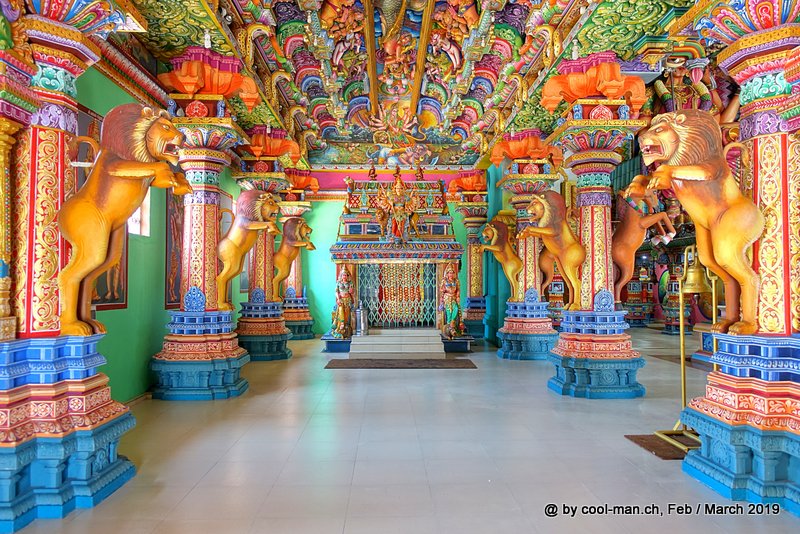 The ceiling with countless details 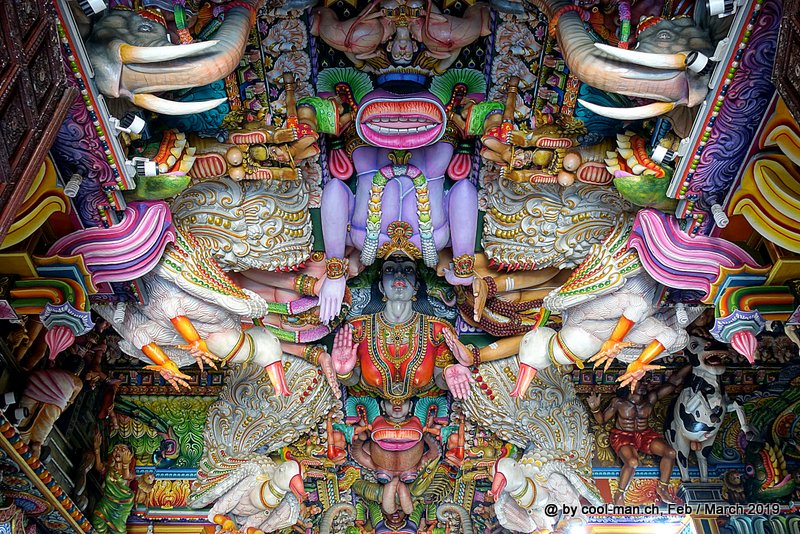 The temple from the outside

This man waited at the entrance of the temple for a donation. 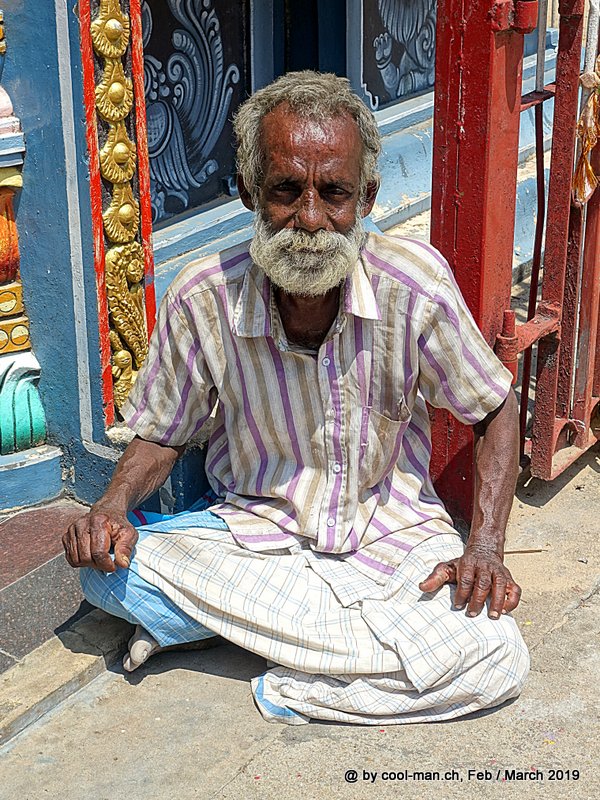 Just a few kilometers from Trincomale are the beaches of Uppuveli and Nivaveli. I didn’t see any big waves here, so these beaches are perfect for swimming. But the beaches are not waste free. Only a few western tourists visit these beaches, so that the area is very lonely especially in the evenings. Moreover, the nice accommodations were expensive. 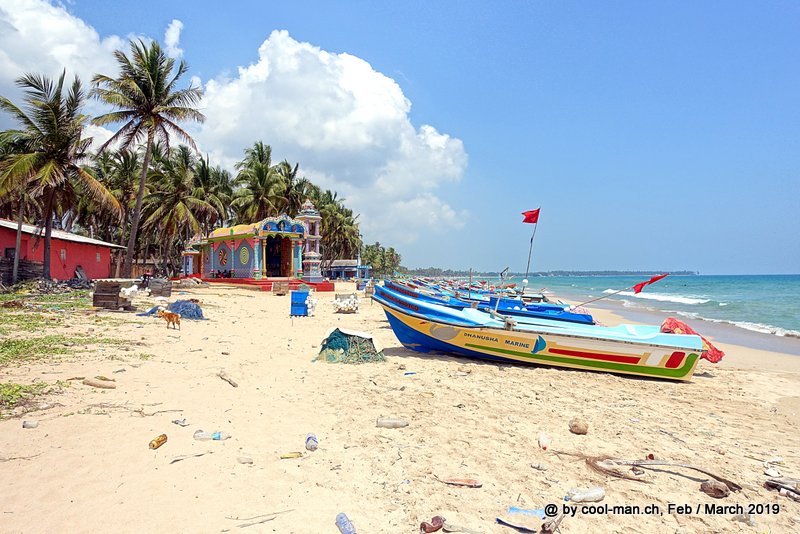 I also visited the Commonwealth War Cemetery, which is praised as one of the sights of the area. But without reference to the killed soldiers it is nothing special despite the well-kept small complex.

By train and bus I travelled further to the spiritual center of Sri Lanka to Kandy, 220 km away.

Since I already visited Kandy on my trip last year, I refer to that travel report for a description of the sights in this city.

Kandy is a city with a lot of traffic, noise and exhaust fumes. Nevertheless I came back to visit the very recommendable Royal Botanical Garden again, as it was raining on my last trip during the visit of the garden.

Founded in 1843 by the British, the garden is located 5.5 km from Kandy, near the village of Peradeniya. With 0.59 km2 it is the largest garden in Sri Lanka and big enough to linger for hours. It contains more than 4,000 plant species, including orchids, spices, medicinal plants and several palm avenues. Over the years, countless personalities such as the British King George V, the Czar of Russia or Indira Gandhi and Yuri Gagarin have planted a tree in the garden. The restaurant with its lunch buffet is also recommendable.

Hundreds of these fruit bat live in the garden.

During the day they hang mostly in the trees as you can see in the top-left area of the picture. 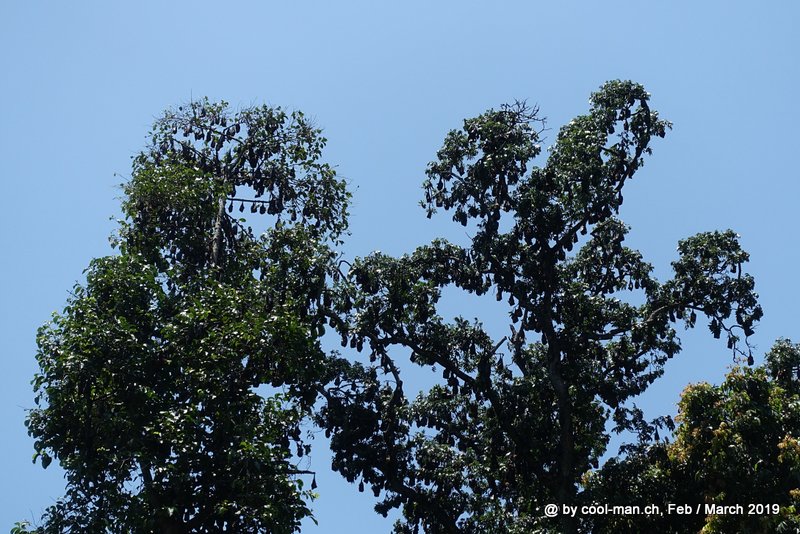 Travellers told me about the hotel/restaurant “Helga’s Folly” which I should definitely visit. It is situated above Kandy. I reached it in a 30-minute walk, but of course Tuk Tuks also drive to Helga’s Folly. It is an eccentric hotel that Helga designed as a therapy after a difficult divorce. Meanwhile, every square inch in the house is painted with fantastic pictures or filled with some memorabilia.

I ate a three-course dinner at the restaurant for USD 20. That was expensive for Sri Lanka, but at least the food was good. The hotel is quite large with 40 rooms and requires constant maintenance, which is not carried out sufficiently probably due to lack of funds. The building, the garden and the swimming pool are in many places unkempt and in need of renovation, which for some people probably increases the charm of this special hotel.

The next morning I took a completely crowded train from Kandy to Ella for seven hours. The train passes through small villages, tea plantations and hilly landscapes. It is probably the most beautiful train route in Sri Lanka. Only a year ago the train was much less busy. I read that meanwhile it has been discovered by Instagram users and is now attracting crowds of imitators.

Since I already visited Ella on my trip last year, I refer to that travel report for a description of the sights of this little town.

I liked Ella very much on my last trip, so I planned a few days on my way north in this place.

Also this time I walked to the nine arch bridge. The passing old train is always an unforgettable sight.

You can see these palm trees from the bridge.

After the meal, which ended with a chocolate mousse of white and dark chocolate, I met this lizard in front of the restaurant.

This lizard also likes to stay at the 98-Acre Resort & Spa.

A stroll to the Little Adam’s Peak rounded off the afternoon.

The next day I made a day trip to “Lipton’s Seat”, a viewpoint from which Sir Lipton enjoyed the view over his tea plantations.

The train ride from Ella to Haputale leads through the hilly tea area. 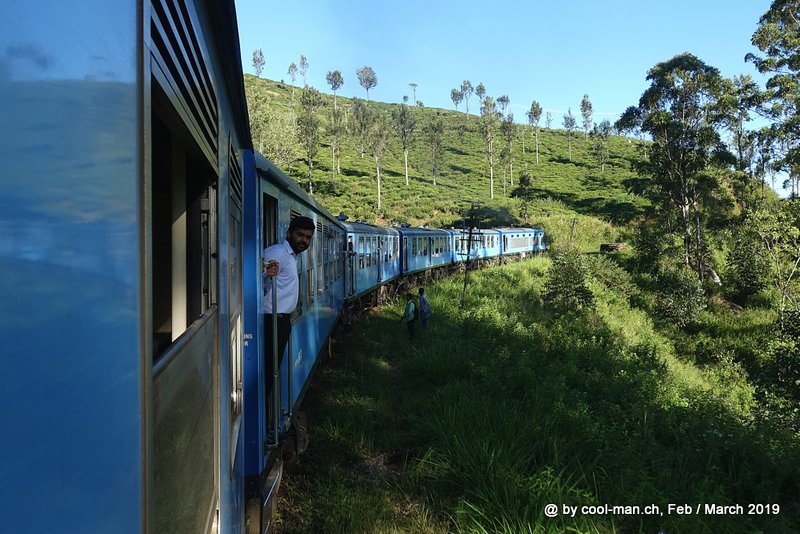 After arriving in Haputale by train, I wanted to take the public bus to the village of Dambethenna. Unfortunately the bus had just left and the next one left in half an hour. Tuk Tuk drivers can be found (almost) everywhere in Sri Lanka and so it did not take long until I was on my way to Dambethenna in a Tuk Tuk. I saved the visit to the tea factory in Dambethenna for the return from Lipton’s Seat, because clouds are usually gathering on the viewpoint later in the morning. Therefore I didn’t want to lose any time with the ascent.

It was a wonderful morning with a steel blue sky and I enjoyed walking alone through the tea fields.

Tea leaves on the shrubs 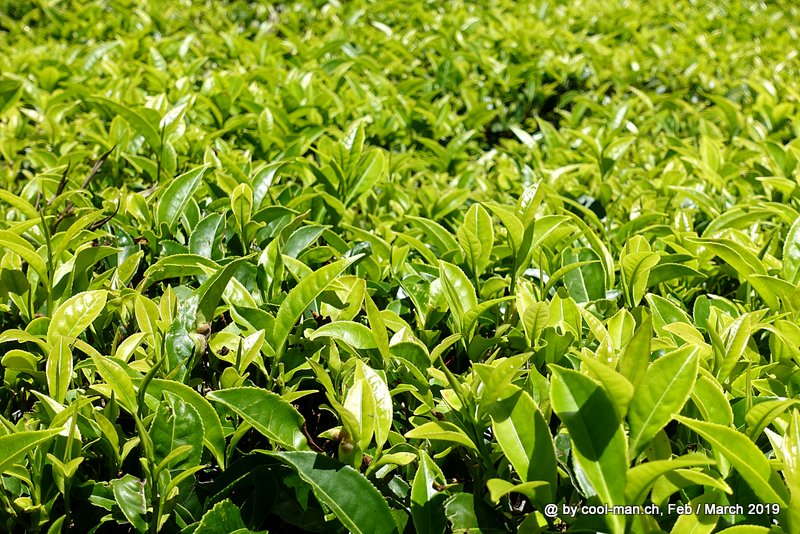 Everywhere there were female pluckers at work. It is a hard job that is paid less than CHF/USD 3 per day. Especially fast pluckers get a little more. The tea factory also provides simple accommodation, but this creates dependencies. If one wishes to change employers, one must also give up the accommodation. Often debts have to be paid off from the earnings. After work, many women still do the housework.

The women pluck only the two upper leaves and the bud of a fresh shoot. 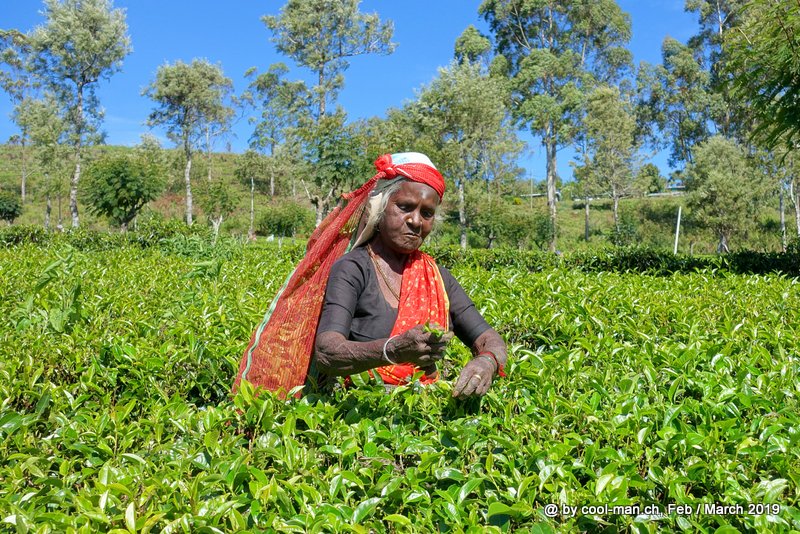 If the bag becomes heavy, the women walk to the weighing station … 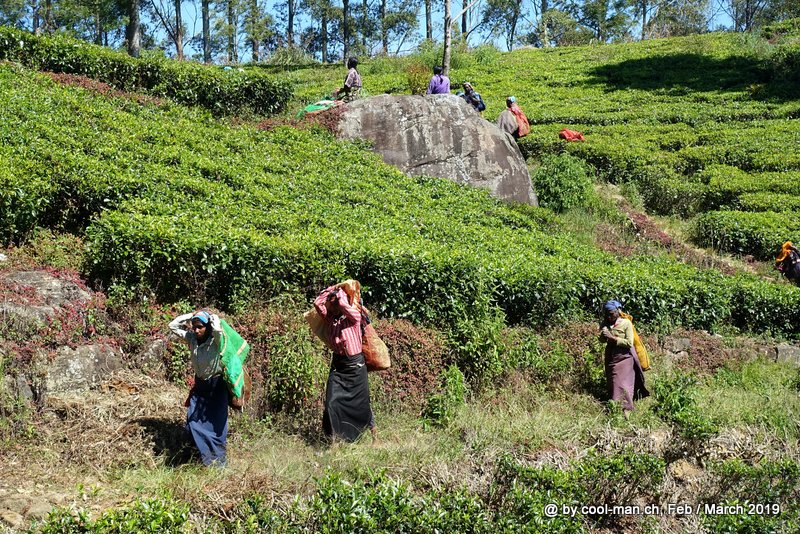 … and wait for their leaves to be weighed.

I was almost the only tourist to walk the 5.7 km from Dambethenna to Lipton’s Seat. Again and again Tuk Tuk’s with tourists passed me with noise and exhaust fume. Not only did they disturb the scenery, but the people also missed the beautiful hike through the tea area, which I liked better than the view from Lipton’s Seat. At the top the Tuk Tuks were dammed up on the narrow road.

I enjoyed the view, a big pot of tea and some sweets in the small restaurant at the viewpoint, while most people left the place after a few photos because the group continued their journey or they had two or three other sights on the same day.

The view from Lipton’s Seat

Because the visitors all visited the place in the early morning due to the feared fog, I was not disturbed by Tuk Tuks on the walk back. On this day the area was fortunately fog-free. But I was begged by school children for pens or money, which showed me that many tourists had already come by here.

Back in Dambethenna I visited the tea factory founded in 1890 by Sir Lipton. It processes 40,000 kg of tea every day. 1,200 pickers collect the tea leaves for this factory. The tour was informative, but photography was not allowed. Among other things, I learned that 1 kg of fresh tea leaves, after drying and further processing, make 240 g of tea.

As you can see at the parking lots in front of the factory, only the general manager can park a car. Already the deputy manager is parking his motorcycle. 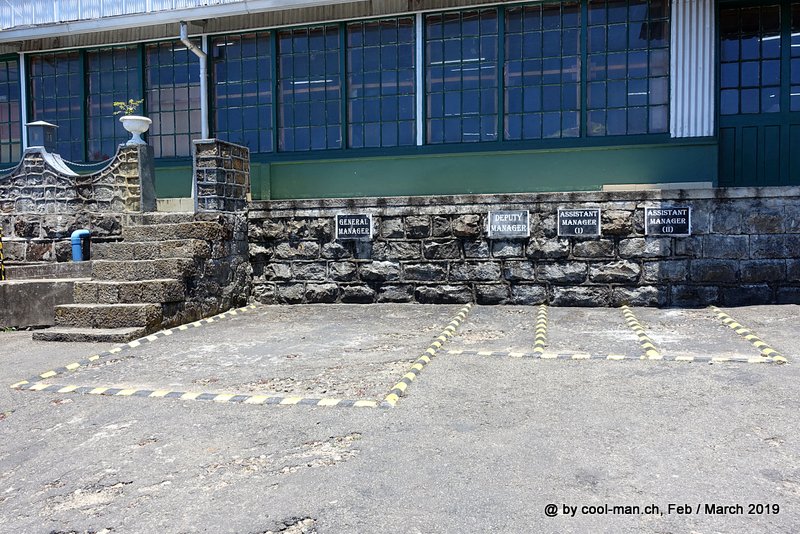 The next day I traveled by bus further to the south coast to Dikwella 160 km away and from there by Tuk Tuk to Hiriketiya beach.

This beach lies on a horseshoe-shaped bay only a few hundred meters wide, where waves break again and again. It is therefore ideal for surfers. 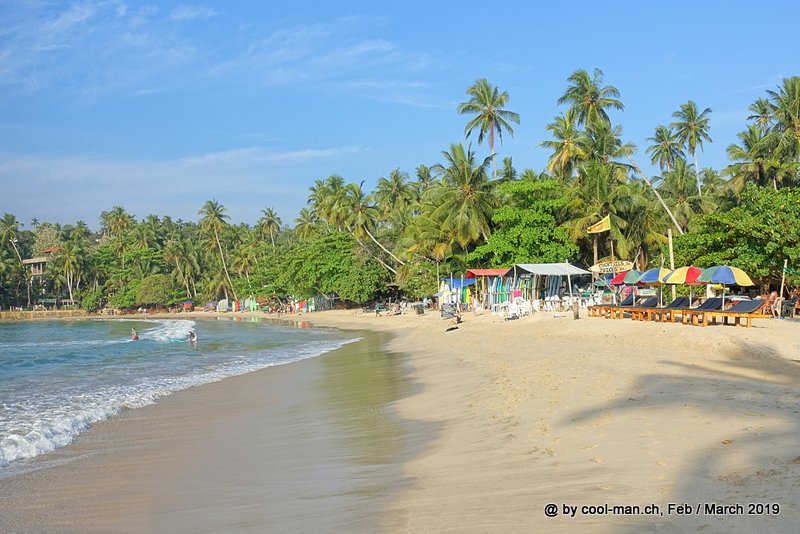 I lived in the upper floor of this guesthouse in the middle of the palm trees with a view over the bay. 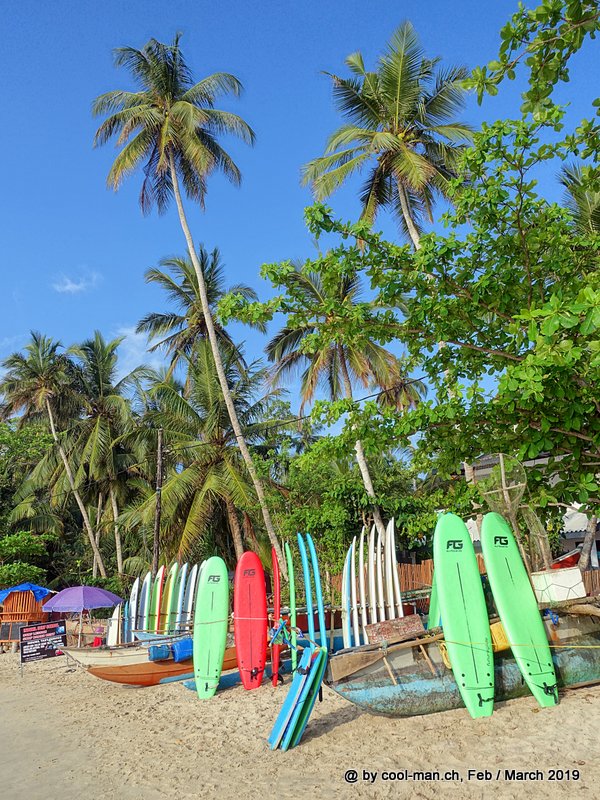 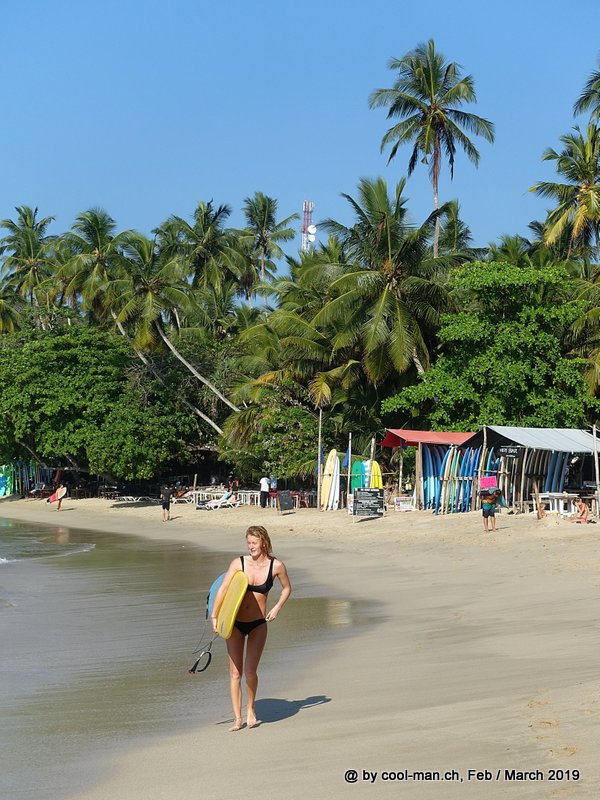 The day always started fine, because I found a yoga hotel with a varied breakfast buffet including muesli and good coffee.

I thought about spending the ten days after my next stay in the Maldives and before my return to Switzerland at Hiriketiya beach. Unfortunately power cuts were frequent and also the mobile internet was often very slow, so that I decided against it.

After a night in Negombo, a beach town near the airport, I traveled back to the Maldives. My destination this time were the northern atolls, hardly visited by tourists.